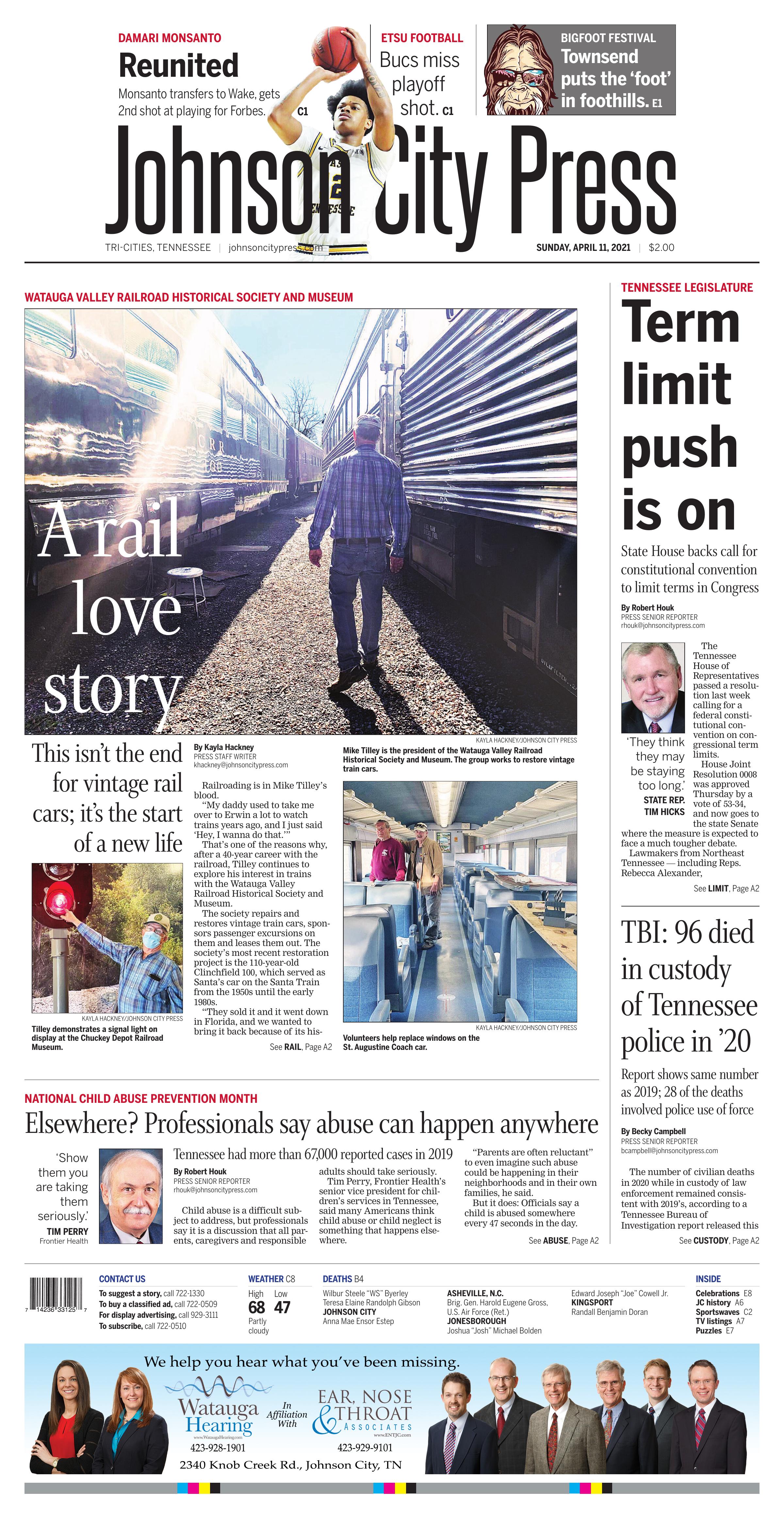 Child abuse is a difficult subject to address, but professionals say it is a discussion that all parents, caregivers and responsible adults should take seriously.

“Parents are often reluctant” to even imagine such abuse could be happening in their neighborhoods and in their own families, he said.

But it does: Officials say a child is abused somewhere every 47 seconds in the day. Tennessee alone had more than 67,000 reported cases of child abuse in 2019.

While data is not yet available from 2020, Perry and others believe the isolation and the social distancing of the COVID-19 pandemic may have made child abuse much more difficult to spot.

Perry notes that physical abuse, neglect, sexual abuse and verbal abuse are all forms of child abuse. Some of the things that might indicate child abuse include:

• Loss of appetite or changes in eating habits;

• Reluctance to return home after an activity;

• Signs of depression or low self-esteem; and

“Never dismiss statements or signs coming from a child indicating abuse,” Perry said. “Listen closely and intently, and show them you are taking them seriously.”

Most importantly, Perry said try to make a child who is reporting the abuse “feel safe.” That means restraining your own anger toward the perpetrator of the abuse, and reassuring the child that the abuse is not their fault.

“Don’t seem to be cross examining the child by digging deep into the details,” Perry said. “Leave the investigation to the professionals.”

Tennessee law requires anyone with suspicions of child abuse to report it immediately to the state Department of Children’s Services or to local law enforcement officials.

If you suspect physical harm or danger to a child, Perry said dial 911 immediately.

The Tennessee House of Representatives passed a resolution last week calling for a federal constitutional convention on congressional term limits.

House Joint Resolution 0008 was approved Thursday by a vote of 53-34, and now goes to the state Senate where the measure is expected to face a much tougher debate.

Lawmakers from Northeast Tennessee — including Reps. Rebecca Alexander, R-Jonesborough, and Tim Hicks, R-Gray — voted in favor of the resolution, which must be approved by 34 state legislatures before a convention can be called on a constitutional amendment to limit terms for members of Congress.

Philip Blumel, the president of U.S. Term Limits, issued a statement last week praising the vote in the Tennessee House. His nonpartisan organization says a research poll shows 78% of likely voters in Tennessee — including independents, Republicans and Democrats — support term limits on Congress.

“The people of Tennessee are lucky to have public servants who see what is going on in D.C. and are willing to take action to fix it,” Blumel said in a release. “They know that Congress won’t set term limits on itself. Therefore, it is the obligation of the states to do so.”

Hicks said Friday he voted for the constitutional convention resolution after hearing “complaints from people who are not happy with the way things are going in Washington, D.C.” The Republican lawmaker said many believe term limits might help solve many of the problems in Congress.

“They see people serving 20 to 30 years, and they think they may be staying too long,” Hicks said. “These are folks who get elected to fight bureaucrats and then they turn into one.”

Hicks said he has no “ill will” to any current officeholders, but he does support the idea of term limits.

The voters of the 1st Congressional District have elected two of Tennessee’s longest-serving members to Congress. The late U.S. Rep. B. Carrol Reece, R-Johnson City, was elected to 18 two-year terms in Congress when he died in office in 1961.

The late U.S. Rep. James H. Quillen, R-Kingsport, had served 17 terms when he retired in 1996. His consequent consecutive 34 years in office represents the longest uninterrupted tenure of any Tennessean to serve in Congress.

Mike Tilley is the president of the Watauga Valley Railroad Historical Society and Museum. The group works to restore vintage train cars.

The Chuckey Depot Railroad Museum was built in 1906, and was moved and restored in Jonesborough in 2011.

Tilley demonstrates a signal light on display at the Chuckey Depot Railroad Museum.

The Clinchfield 100 was used most recently as Santa's car on the Santa Train in 2019.

Railroading is in Mike Tilley’s blood.

“My daddy used to take me over to Erwin a lot to watch trains years ago, and I just said ‘Hey, I wanna do that.’”

That’s one of the reasons why, after a 40-year career with the railroad, Tilley continues to explore his interest in trains with the Watauga Valley Railroad Historical Society and Museum.

The society repairs and restores vintage train cars, sponsors passenger excursions on them and leases them out. The society’s most recent restoration project is the 110-year-old Clinchfield 100, which served as Santa’s car on the Santa Train from the 1950s until the early 1980s.

“They sold it and it went down in Florida, and we wanted to bring it back because of its history,” Tilley said.

The Clinchfield 100 was used again as Santa’s car in 2019 after undergoing a major restoration. The society has restored four other cars: two passenger cars, one dining car and one sleeper and lounge car.

“We have very little contract work,” he said. “We do most of our work right here.”

All the work is done by members of the society who volunteer to restore the cars. The Watauga Valley Railroad Historical Society and Museum has roughly 300 members involved in different ways. More than 20 volunteer to work on the cars, while approximately 90 members volunteer to work at the Chuckey Depot Railroad Museum.

The Chuckey Depot was built in 1906 in Chuckey. It was privately owned from 1959 until 2009, and was added to the National Registry of Historic Places in 1979. It was dismantled, moved and restored in Jonesborough in 2011 to serve as a railroad museum.

The theme of the museum’s exhibit changes every six months, so repeat visitors have something new to look forward to. The current theme is the East Tennessee and Western North Carolina Railroad, which ran through Johnson City to Boone.

“We have different themes in here every six months,” said Tilley. “We’ve had the Clinchfield, we’ve had the Southern, the ET and we’ve had a Chuckey theme and all that.”

The museum includes a fully restored caboose, and also has a live railroad camera that visitors to the society and museum’s website can use to watch trains passing by the depot in real time.

The Chuckey Depot is open Thursday through Sunday from 1 p.m. until 4 p.m. Admission is free, but donations are appreciated.

The number of civilian deaths in 2020 while in custody of law enforcement remained consistent with 2019’s, according to a Tennessee Bureau of Investigation report released this week.

The 2020 report showed that of the 96 deaths, 28 were a result of deadly use-of-force incidents in the state, with nearly half of those occurring between May and July.

According to the TBI website, tn.gov/tbi, the reports “only contain information pertaining to deaths that occurred in the presence of law enforcement or deaths that occurred while in custody, such as in a local jail or prison. Introduction scope of study data in this study does not include occurrences where an officer fired his/her weapon in a situation which did not result in a death or when a subject sustained a serious bodily injury directly related to use of force by a law enforcement officer.”

The oldest person to die was 85 and the youngest was 22.

To read the full 2020 report as well as previous years, go to www.tn.gov/tbi/divisions/cjis-division/recent-publications.html or bit.ly/2Qb1Hyo.