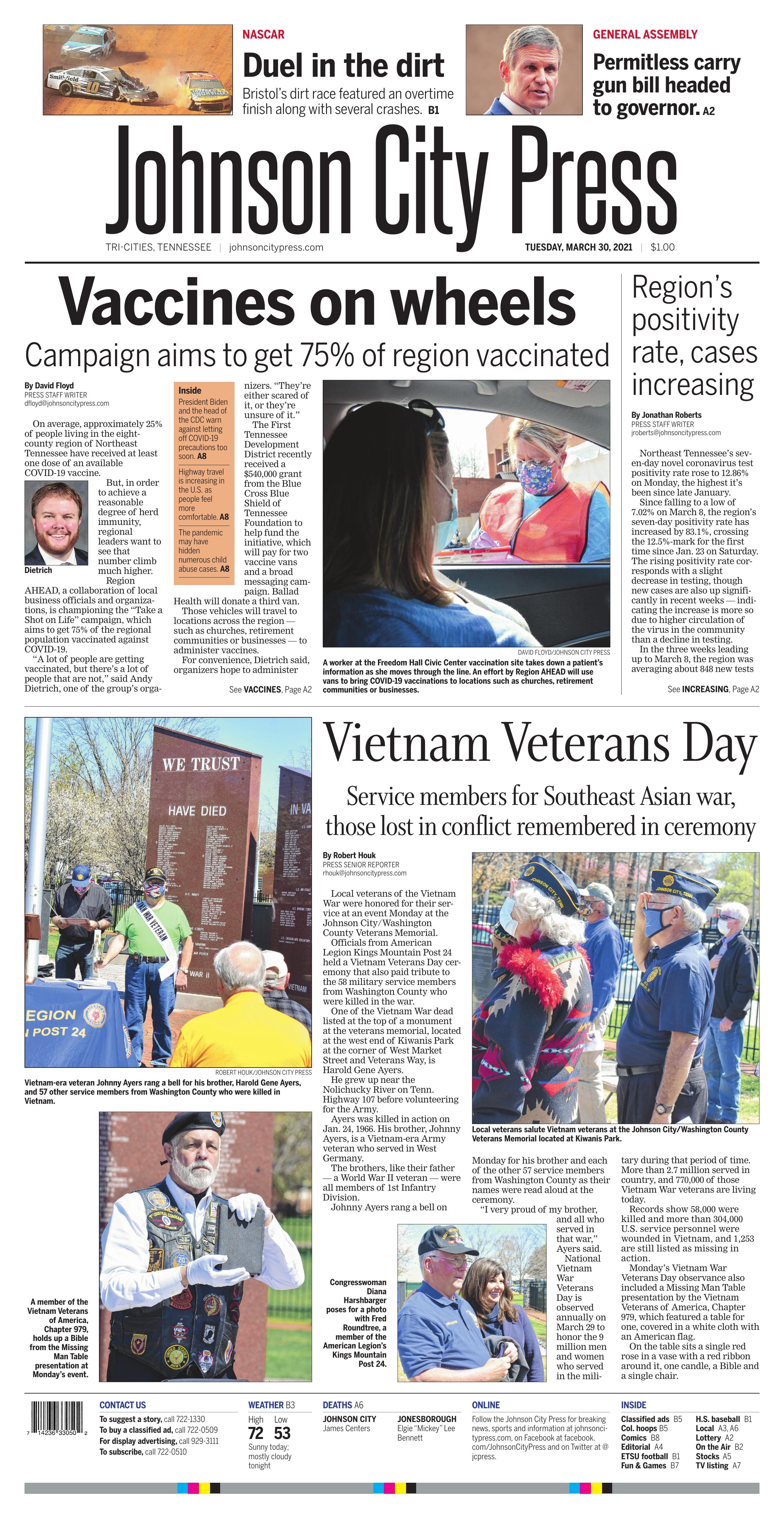 On average, approximately 25% of people living in the eight-county region of Northeast Tennessee have received at least one dose of an available COVID-19 vaccine.

But, in order to achieve a reasonable degree of herd immunity, regional leaders want to see that number climb much higher.

Region AHEAD, a collaboration of local business officials and organizations, is championing the “Take a Shot on Life” campaign, which aims to get 75% of the regional population vaccinated against COVID-19.

“A lot of people are getting vaccinated, but there’s a lot of people that are not,” said Andy Dietrich, one of the group’s organizers. “They’re either scared of it, or they’re unsure of it.”

The First Tennessee Development District recently received a $540,000 grant from the Blue Cross Blue Shield of Tennessee Foundation to help fund the initiative, which will pay for two vaccine vans and a broad messaging campaign. Ballad Health will donate a third van.

Those vehicles will travel to locations across the region — such as churches, retirement communities or businesses — to administer vaccines.

For convenience, Dietrich said, organizers hope to administer the one-shot Johnson & Johnson vaccine, which would eliminate the need to return to a location to administer a second dose.

The organization expects to get the mobile vaccination vans rolling in mid-to-late April. The plan is to continue administering vaccines through August, but if the initiative ends up being successful, the vehicles may be on the road longer.

Ryans said organizers want to focus their efforts on underserved populations and those who have difficulty accessing a vaccination site.

There’s still some question about what percentage of the population needs to be vaccinated in order to achieve herd immunity, Ryans said, but organizers decided to establish 75% as an overarching goal.

“Obviously, if we get more than that that would be even better,” she said.

A recent survey conducted by Smarty Pants, a market research firm, on behalf of Region AHEAD found that two out of three local residents want the vaccine as soon as possible. The survey polled 770 people in Northeast Tennessee and Southwest Virginia.

Organizers want to cater to the percentage of the population who are either waiting to get vaccinated or who are undecided.

With people starting to forgo masks when they go out and prematurely returning to their normal daily routines, hospitals are seeing an uptick in COVID patients and a rise in the infection rate.

Vaccinating more people would allow the region to get closer to an adequate level of herd immunity, Dietrich said, which occurs when a large percentage of the population is immune to a disease.

“We can’t make you get a shot, but we want to try to make it as easy as possible,” Dietrich said.

A Vietnam Veterans Day observance was held Monday at the Johnson City/Washington County Veterans Memorial. A bell was sounded for each of the 58 service members from Washington County who were killed in Vietnam.

Vietnam-era veteran Johnny Ayers rang a bell for his brother, Harold Gene Ayers, and 57 other service members from Washington County who were killed in Vietnam.

Congresswoman Diana Harshbarger poses for a photo with Fred Roundtree, a member of the American Legion’s Kings Mountain Post 24.

Local veterans honor the 58 services members from Washington County killed in Vietnam during a ceremony Monday at the Johnson City/Johnson City Veteran’s Memorial.

A member of the Vietnam Veterans of America, Chapter 979, holds up a Bible from the Missing Man Table presentation at Monday’s event.

Local veterans of the Vietnam War were honored for their service at an event Monday at the Johnson City/Washington County Veterans Memorial.

Officials from American Legion Kings Mountain Post 24 held a Vietnam Veterans Day ceremony that also paid tribute to the 58 military service members from Washington County who were killed in the war.

One of the Vietnam War dead listed at the top of a monument at the veterans memorial, located at the west end of Kiwanis Park at the corner of West Market Street and Veterans Way, is Harold Gene Ayers.

He grew up near the Nolichucky River on Tenn. Highway 107 before volunteering for the Army.

Ayers was killed in action on Jan. 24, 1966. His brother, Johnny Ayers, is a Vietnam-era Army veteran who served in West Germany.

The brothers, like their father — a World War II veteran — were all members of 1st Infantry Division.

Johnny Ayers rang a bell on Monday for his brother and each of the other 57 service members from Washington County as their names were read aloud at the ceremony.

“I very proud of my brother, and all who served in that war,” Ayers said.

National Vietnam War Veterans Day is observed annually on March 29 to honor the 9 million men and women who served in the military during that period of time. More than 2.7 million served in country, and 770,000 of those Vietnam War veterans are living today.

Monday’s Vietnam War Veterans Day observance also included a Missing Man Table presentation by the Vietnam Veterans of America, Chapter 979, which featured a table for one, covered in a white cloth with an American flag.

On the table sits a single red rose in a vase with a red ribbon around it, one candle, a Bible and a single chair.

Since falling to a low of 7.02% on March 8, the region’s seven-day positivity rate has increased by 83.1%, crossing the 12.5%-mark for the first time since Jan. 23 on Saturday. The rising positivity rate corresponds with a slight decrease in testing, though new cases are also up significantly in recent weeks — indicating the increase is more so due to higher circulation of the virus in the community than a decline in testing.

Active cases, which fell to 1,128 (-22 from Friday) over the weekend, rose to 1,160 on Monday. Total active cases increased by 32 from Sunday, with no county in the region reporting a decrease in active cases.

Ballad Health on Monday reported 94 people hospitalized with COVID-19 in its facilities, an increase of nine from Friday’s total.

Of those hospitalized, 24 (+2) were in intensive care units, which is the most reported since Jan. 29.

There were also 11 people on ventilators, a decrease of two from Friday. COVID-dedicated bed capacity remained steady at 19.

The Northeast Regional Health Office events in Carter and Hawkins counties do not require appointments. For the events in Greene and Unicoi counties, you can book an appointment at vaccinate.tn.gov.

The Northeast Regional Health Office events will use the two-dose Pfizer-BioNTech vaccine.