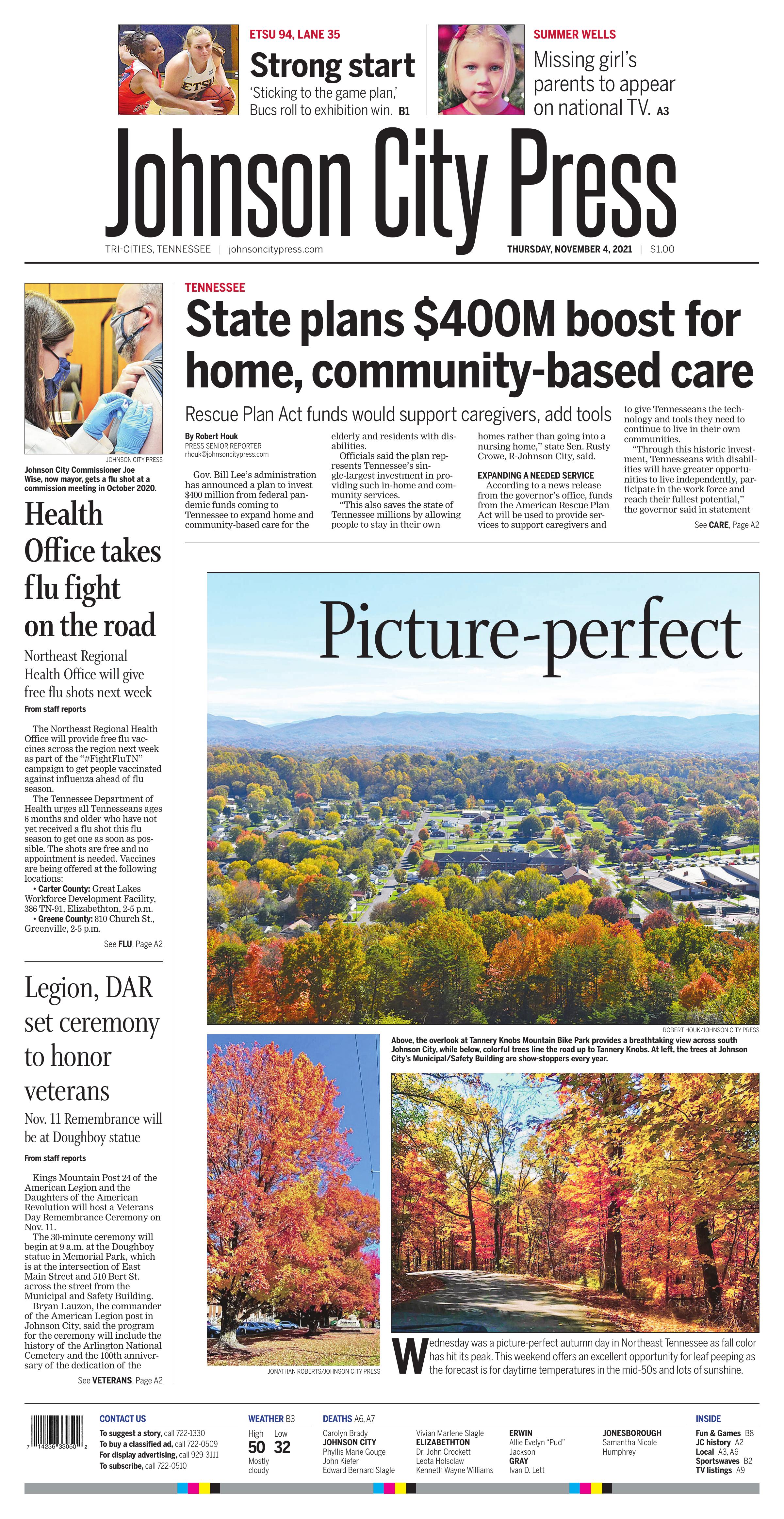 Gov. Bill Lee poses for photos in October with East Tennessee State University student Garrison Buchanan and others after he presented the governor with the state's latest Employment Task Force Report. Buchanan is a member of the Access ETSU Program.

Gov. Bill Lee’s administration has announced a plan to invest $400 million from federal pandemic funds coming to Tennessee to expand home and community-based care for the elderly and residents with disabilities.

“This also saves the state of Tennessee millions by allowing people to stay in their own homes rather than going into a nursing home,” state Sen. Rusty Crowe, R-Johnson City, said.

According to a news release from the governor’s office, funds from the American Rescue Plan Act will be used to provide services to support caregivers and to give Tennesseans the technology and tools they need to continue to live in their own communities.

“Through this historic investment, Tennesseans with disabilities will have greater opportunities to live independently, participate in the work force and reach their fullest potential,” the governor said in statement released on Wednesday. “It’s my hope that this enhanced support will shine a light on the important services that caregivers provide and change the lives of Tennesseans across our state.”

The plan is to use the funds to match Medicaid dollars going to a federally approved program developed by TennCare and the state Department of Intellectual and Developmental Disabilities to address in-home and community care.

“Serving more people with intellectual and developmental disabilities to reach their employment, community engagement, and independence goals has been a top priority for both DIDD and TennCare since day one,” Department of Intellectual and Developmental Disabilities Commissioner Brad Turner said.

Crowe, who chairs the Senate Health and Welfare Committee, said the governor had an opportunity to see the state’s efforts to enhance community-based services for those with disabilities when he toured Core Services of Northeast Tennessee in October.

The Johnson City-based nonprofit organization provides assisted living, employment and nursing services to residents with developmental disabilities in the region.

The state is currently working with Core Services to employ technology to support those with disabilities in reaching their goals of independence.

“I was on site when Gov. Lee visited Core Services,” state Rep. Tim Hicks, R-Gray, told the Press. “To see the work that they are doing to make the lives of individuals who have intellectual disabilities better is amazing. This investment will truly help.”

Erasing A Backlog Of Cases

Crowe said the governor’s plan will provide services to 2,000 individuals with intellectual and developmental disabilities and reduce the waiting list for TennCare’s Employment and Community First CHOICES program.

State Rep. Rebecca Alexander, R-Jonesborough, said she is “thrilled that Gov. Lee has heard the cry for help from families with members who have physical and intellectual disabilities.” Alexander also noted she is pleased to see the funding could result in the Employment and Community First CHOICES program having “its long waiting list drastically reduced giving these families the support they desperately need.”

A portion of the $400 million will be also be used to invest in the recruitment, training and retention of frontline support staffers to better serve Tennesseans with disabilities. Crowe said that includes increasing the salaries of case workers who provide community-based care.

“These caregivers have very tough jobs,” Crowe said. “Many have left in the past year to take better-paying jobs.”

FILE - In this Wednesday, Feb. 7, 2018 file photo, a nurse prepares a flu shot from a vaccine vial at the Salvation Army in Atlanta. (AP Photo/David Goldman)

The Northeast Regional Health Office will provide free flu vaccines across the region next week as part of the “#FightFluTN” campaign to get people vaccinated against influenza ahead of flu season.

The Tennessee Department of Health urges all Tennesseans ages 6 months and older who have not yet received a flu shot this flu season to get one as soon as possible. The shots are free and no appointment is needed. Vaccines are being offered at the following locations:

Bryan Lauzon, commander of American Legion Kings Mountain Post 24, salute the fallen after placing a wreath at the foot of the “Spirit of the American Doughboy” statue during a Memorial Day ceremony in May.

The 30-minute ceremony will begin at 9 a.m. at the Doughboy statue in Memorial Park, which is at the intersection of East Main Street and 510 Bert St. across the street from the Municipal and Safety Building.

Bryan Lauzon, the commander of the American Legion post in Johnson City, said the program for the ceremony will include the history of the Arlington National Cemetery and the 100th anniversary of the dedication of the Tomb of the Unknown Soldier.

There will also be a ringing of the “Peace Bells.”

Lauzon said all veterans and area residents are encouraged to attend the event.

There will also be a Veterans Day ceremony held at 11 a.m. on the same day at the Johnson City/Washington County Veterans Memorial, 703 W. Main St.

Meanwhile, Lauzon said cost and continued COVID-19 concerns have resulted in the cancellation of the city’s Veterans Day Parade for the second year in a row.