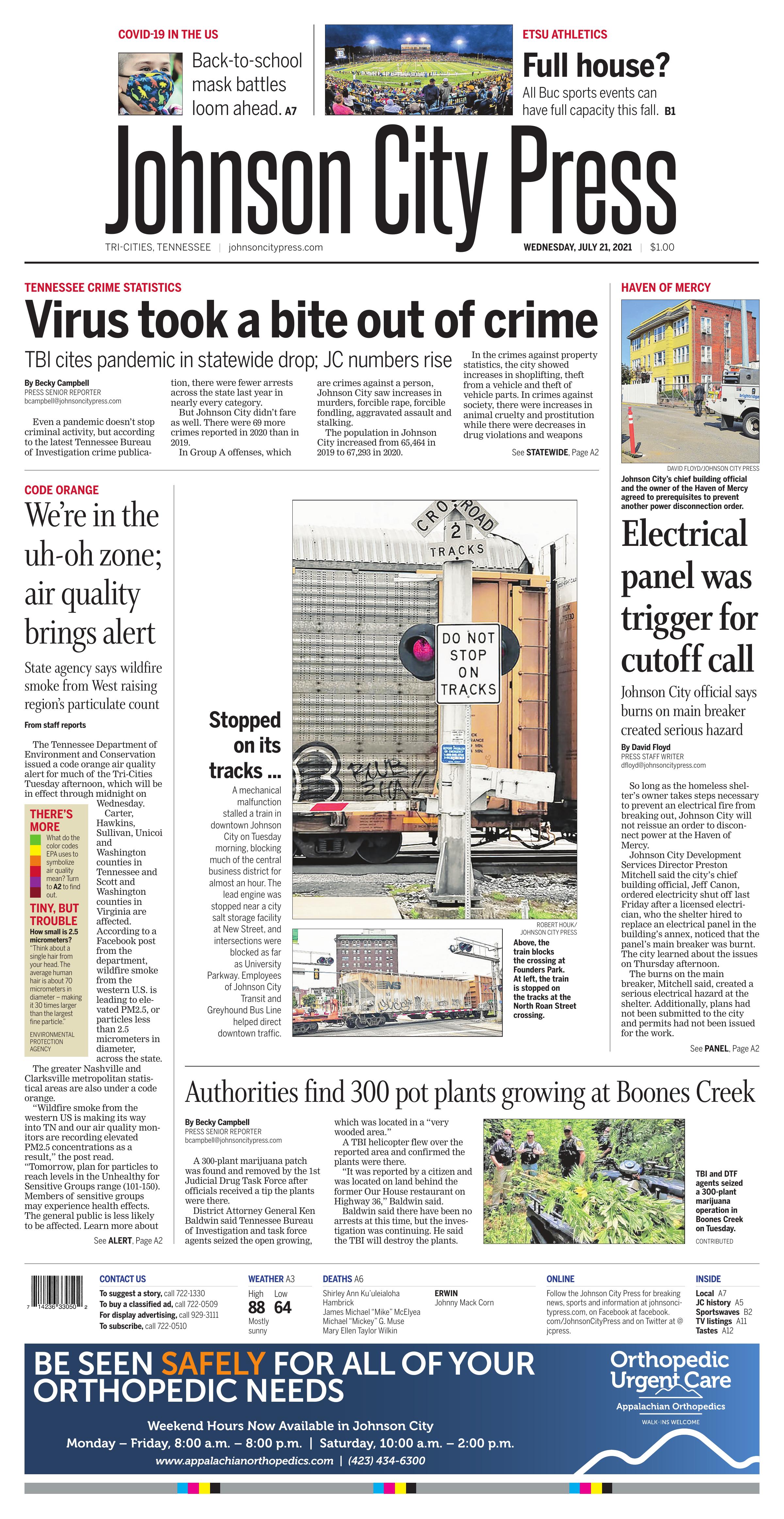 News
featured
Crime down in Tennessee in 2020 amid COVID pandemic

Even a pandemic doesn’t stop criminal activity, but according to the latest Tennessee Bureau of Investigation crime publication, there were fewer arrests across the state last year in nearly every category.

In Group A offenses, which are crimes against a person, Johnson City saw increases in murders, forcible rape, forcible fondling, aggravated assault and stalking.

Group B crimes, which are non-violent crimes such as forgery, public intoxication, trespassing and disorderly conduct, the total number went down from 1,288 in 2019 to 1,233 in 2020.

“The state’s 2020 crime data was undeniably impacted by the COVID-19 pandemic, as workplaces, schools, and other community venues were closed, TBI Director David Rausch said.

“The data analysis and the numerous graphs and charts in this year’s publication illustrate the sharp decline in reported crime. The TIBRS (Tennessee Incident Based Reporting System) program continues to serve as a model for the nation and remains successful because of the continued cooperation by Tennessee’s law enforcement community.”

The Washington County Sheriff’s Office also reported fewer crimes overall and was down 333 crimes in 2020 when compared to 2019.

But there were some increases in significant categories:

Among the report’s findings statewide were:

“TBI remains committed to this effort and will continue to provide the training and technical assistance necessary to collect the most accurate and comprehensive crime statistics for Tennessee and its citizens,” Rausch said.

To see the full report, go to bit.ly/3zos8SF. Reports from prior years are located on the TBI website under “publications.”

A 300-plant marijuana patch was found and removed by the 1st Judicial Drug Task Force after officials received a tip the plants were there.

A TBI helicopter flew over the reported area and confirmed the plants were there.

“It was reported by a citizen and was located on land behind the former Our House restaurant on Highway 36,” Baldwin said.

Baldwin said there have been no arrests at this time, but the investigation was continuing. He said the TBI will destroy the plants.

The Tennessee Department of Environment and Conservation issued a code orange air quality alert for much of the Tri-Cities Tuesday afternoon, which will be in effect through midnight on Wednesday.

The greater Nashville and Clarksville metropolitan statistical areas are also under a code orange.

“Wildfire smoke from the western US is making its way into TN and our air quality monitors are recording elevated PM2.5 concentrations as a result,” the post read. “Tomorrow, plan for particles to reach levels in the Unhealthy for Sensitive Groups range (101-150). Members of sensitive groups may experience health effects. The general public is less likely to be affected. Learn more about the AQI and monitor your local air quality at https://www.airnow.gov.”

The Sullivan County Regional Health Department on Twitter said increased PM2.5 can lead to increasing likelihood of respiratory or cardia symptoms in sensitive individuals, aggravation of heart or lung disease and premature mortality in people with cardiopulmonary disease and the elderly.

The department recommended that people reduce prolonged or heavy outdoor exertion, and advised people to watch for symptoms such as coughing or shortness of breath. Those with asthma should follow their asthma action plans and keep quick relief medicine handy.

So long as the homeless shelter’s owner takes steps necessary to prevent an electrical fire from breaking out, Johnson City will not reissue an order to disconnect power at the Haven of Mercy.

Johnson City Development Services Director Preston Mitchell said the city’s chief building official, Jeff Canon, ordered electricity shut off last Friday after a licensed electrician, who the shelter hired to replace an electrical panel in the building’s annex, noticed that the panel’s main breaker was burnt. The city learned about the issues on Thursday afternoon.

The burns on the main breaker, Mitchell said, created a serious electrical hazard at the shelter. Additionally, plans had not been submitted to the city and permits had not been issued for the work.

Because the panel is damaged, power is not operational in the annex, but Mitchell said there is still live electricity running through the facility.

On Monday morning, city staff, including Canon and Development Services Manager Dave McClelland, visited the shelter to inspect the panel.

They confirmed the issues shared by the contractor, but Mitchell said they also found other deficiencies. The main breaker was no longer operable, and the panel was overloaded, meaning there was too much power coming in for the type and number of breakers.

Multiple breakers were “piggybacked” improperly, and almost all of the breakers in the panel weren’t the brand required by the manufacturer.

“It means that there’s a potential for a very serious electrical situation to occur at that facility,” Mitchell said. “It could potentially lead to an electrical fire.”

How did we get here?

About a week earlier, on July 7, the city received a complaint from a resident living in the annex who said power had been inoperable in the building for several weeks. The resident was paying rent to live there.

Canon and a fire prevention officer visited the property on July 13 to conduct an inspection, but Grant Rockley, the owner of the Haven of Mercy, denied Canon access to the electrical panel in the annex.

The fire prevention officer, however, did conduct an inspection of the fire alarm system, noting that power was running to the equipment. In his report, the officer wrote that smoke heads had a blinking green light and there was “no trouble at panel.”

Mitchell said the fire prevention officer was just there to check on the alarm system, meaning his inspection did not include a thorough evaluation of the electrical panel at the annex. That would have been part of Canon’s inspection.

That’s why the shelter passed its fire code enforcement inspection on Tuesday, July 13. Two days later, the city received word from the Haven’s licensed electrician that there were issues with the panel, which prompted the decision to shut off electricity to the property.

Mitchell reiterated that BrightRidge crews were denied entrance to the Haven of Mercy on Friday, and he said city officials attempted to contact a municipal judge to obtain a civil warrant to access the property.

They never obtained a warrant, but Canon and Rockley were able to open dialogue over the weekend and set up a time for staff to inspect the panel on Monday.

On Monday, Mitchell said, Canon and Rockley agreed on a set of prerequisites that the Haven will have to meet to prevent the city from reissuing the order to disconnect power.

One prerequisite is that the Haven must have a licensed contractor pull permits to commence work on repairs to the structure, which is connected to an ongoing codes enforcement case at the facility. The city approved the plans for the repairs roughly six weeks ago. Mitchell said Rockley pulled permits for the work on Monday.

The second is that a licensed electrician must pull a permit to completely sever all electrical connections in the panel so that the annex is disconnected from the main building. The shelter has until Thursday at 10 a.m. to pull that permit, and work must be complete by Thursday at 5 p.m.

Mitchell said the timing of the city’s effort to shut off power at the shelter, which raised concerns because it was around 5 p.m. on a Friday, was not intentional.

Canon drafted the order on Friday morning after hearing from the shelter’s electrician on Thursday.

But he had to get permission from a superior before he could proceed. Mitchell ultimately signed off, and after getting input from the city attorney’s office, it was sent to BrightRidge at around 3 p.m. on Friday.

Because the complaint on July 7 also raises concerns about whether the shelter meets minimum housing standards, the Board of Dwelling Standards and Review will consider on Thursday whether the property’s annex is fit for human occupation.

One of the city’s minimum housing standards is that residential structures must have electricity.

Staff will present evidence during a show cause hearing, and if members of the BDSR believes there’s enough proof to proceed, a public hearing will be scheduled at a later date.

This case will be separate from an ongoing codes enforcement case at the Haven, which relates to unpermitted work and other deficiencies at the shelter. Rockley pulled permits for those repairs on Monday.