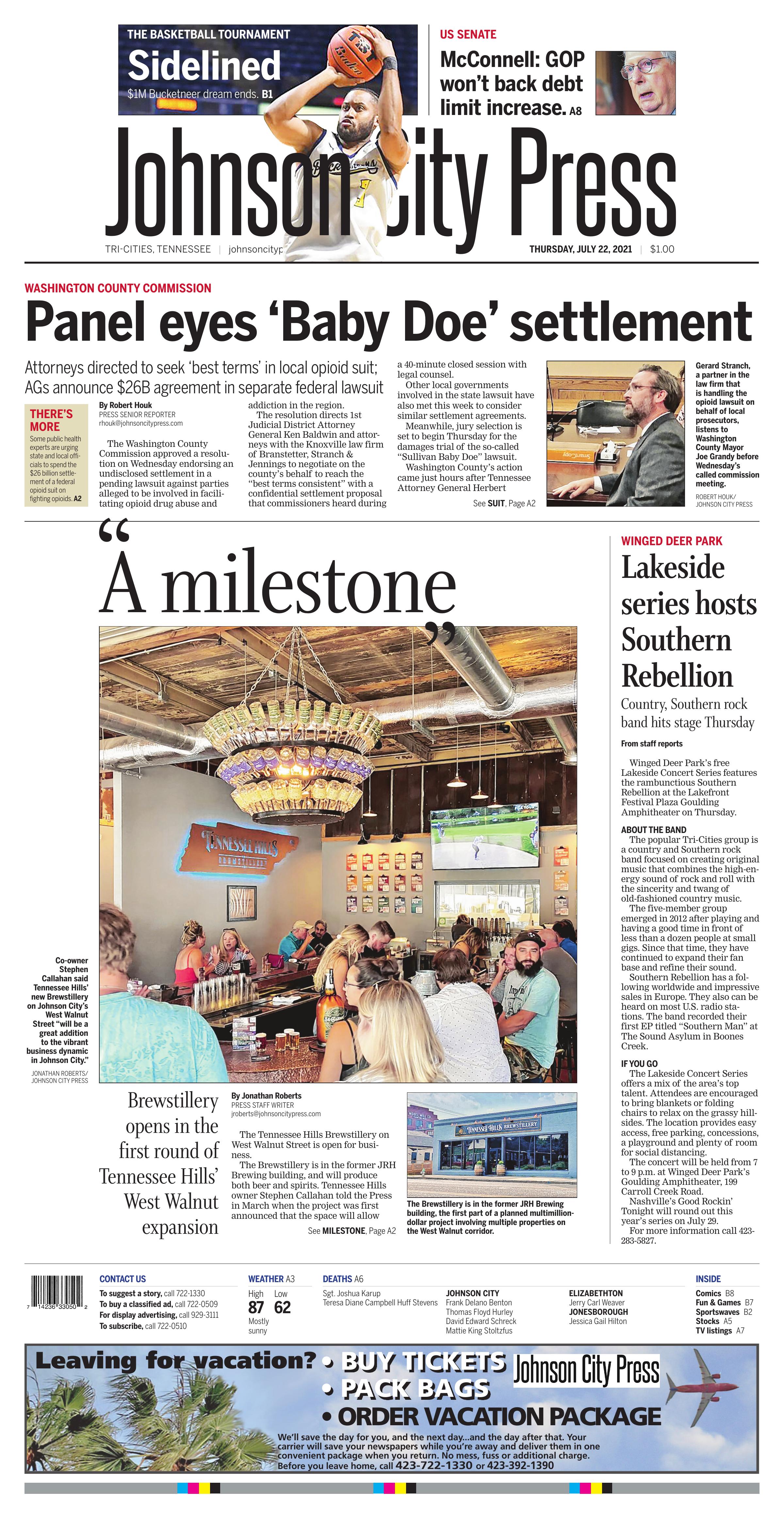 Washington County Mayor Joe Grandy speaks to Gerard Stranch, a partner in the Nashville-based law firm of Branstetter, Stranch and Jennings, which is handling the opioid lawsuit on behalf of local prosecutors, before Wednesday's called meeting of the County Commission.

The Washington County Commission approved a resolution on Wednesday endorsing an undisclosed settlement in a pending lawsuit against parties alleged to be involved in facilitating opioid drug abuse and addiction in the region.

The resolution directs 1st Judicial District Attorney General Ken Baldwin and attorneys with the Knoxville law firm of Branstetter, Stranch & Jennings to negotiate on the county’s behalf to reach the “best terms consistent” with a confidential settlement proposal that commissioners heard during a 40-minute closed session with legal counsel.

Other local governments involved in the state lawsuit have also met this week to consider similar settlement agreements.

Meanwhile, jury selection is set to begin Thursday for the damages trial of the so-called “Sullivan Baby Doe” lawsuit.

Tennessee is slated to receive $600 million from that agreement. Slatery said the settlement is a “huge amount, and the second-largest in this nation’s history.”

“Today is a good day, and we are ready to move forward,” Slatery said. He also noted that opioid overdose deaths rose by 44% in 2020, adding “the urgency of this problem continues.”

Slatery said Tennessee is expected to see a large amount from the opioid settlement if the state “meets all the benchmarks” set out in the agreement. He said the state General Assembly has already put a “structure in place” to see that the settlement funds go to drug abatement programs.

“We are not at the finish line yet, but we are getting there,” Slatery said.

North Carolina Attorney General Josh Stein said that unlike the record tobacco settlements of the 1990s, the opioid agreement specifies recipients use “a vast amount” of the funds for drug abatement resources.

Washington County commissioners met Wednesday in what was called an “emergency” session under the board’s rules to to “consider a settlement of a pending litigation” matter. The state’s Sunshine Law requiring government boards to hold all meetings in public view has an exception that allows such bodies to meet behind closed doors with their attorneys to discuss details of pending litigation.

The state litigation was filed in Sullivan County by local prosecutors in 2017 against drug manufacturers for their alleged roles in an “opioid epidemic” under the state’s Drug Dealer Liability Act.

The lawsuit, which is separate from the opioid litigation filed in federal court, seeks to compensate Washington and other plaintiff counties in the 1st, 2nd and 3rd Judicial Districts for hardships created by the opioid epidemic.

Purdue and Mallinckrodt have since declared bankruptcy, with claims proceeding against them in those courts. Endo remains the only active corporate defendant listed in the original lawsuit.

Sullivan County Chancellor E.G. Moody handed down a decision in April granting a default judgment in the plaintiffs’ favor. The ruling imposed sanctions against defendant Endo Health Solutions Inc. and Endo Pharmaceuticals Inc., but reserved a final judgment pending the damages trial that is scheduled to begin on Monday.

The Tennessee Hills Brewstillery on West Walnut Street is open for business.

The Brewstillery is in the former JRH Brewing building, and will produce both beer and spirits. Tennessee Hills owner Stephen Callahan told the Press in March when the project was first announced that the space will allow Tennessee Hills to expand its distribution radius and also allow it to test and perfect recipes before they enter production.

It will feature a taproom and cocktail bar, as well as outdoor seating.

This is the first part of a multimillion-dollar project involving multiple properties along the West Walnut corridor that Callahan called “a perfect storm to build a brand that’s brewing right there on the West Walnut Street corridor” in March.

“The new location is a milestone for the brand in that it allows us to expand our regional footprint and product offerings which will continue to cast a powerful spotlight on the Tennessee Hills brand,” Callahan said Wednesday. “I believe it sets the stage for the next phase of growth, which is the manufacturing facility that will also be located on West Walnut.”

“We believe the Brewstillery will be a great addition to the vibrant business dynamic in Johnson City,” Callahan said. “In conjunction with the (West) Walnut Street corridor project and our investment on the same street, Johnson City will continue to become an absolute destination.”

Southern Rebellion will perform at the Lakefront Festival Plaza Goulding Amphitheater on Thursday.

The popular Tri-Cities group is a country and Southern rock band focused on creating original music that combines the high-energy sound of rock and roll with the sincerity and twang of old-fashioned country music.

The five-member group emerged in 2012 after playing and having a good time in front of less than a dozen people at small gigs. Since that time, they have continued to expand their fan base and refine their sound.

Southern Rebellion has a following worldwide and impressive sales in Europe. They also can be heard on most U.S. radio stations. The band recorded their first EP titled “Southern Man” at The Sound Asylum in Boones Creek.

The Lakeside Concert Series offers a mix of the area’s top talent. Attendees are encouraged to bring blankets or folding chairs to relax on the grassy hillsides. The location provides easy access, free parking, concessions, a playground and plenty of room for social distancing.

The concert will be held from 7 to 9 p.m. at Winged Deer Park’s Goulding Amphitheater, 199 Carroll Creek Road.

Nashville’s Good Rockin’ Tonight will round out this year’s series on July 29.