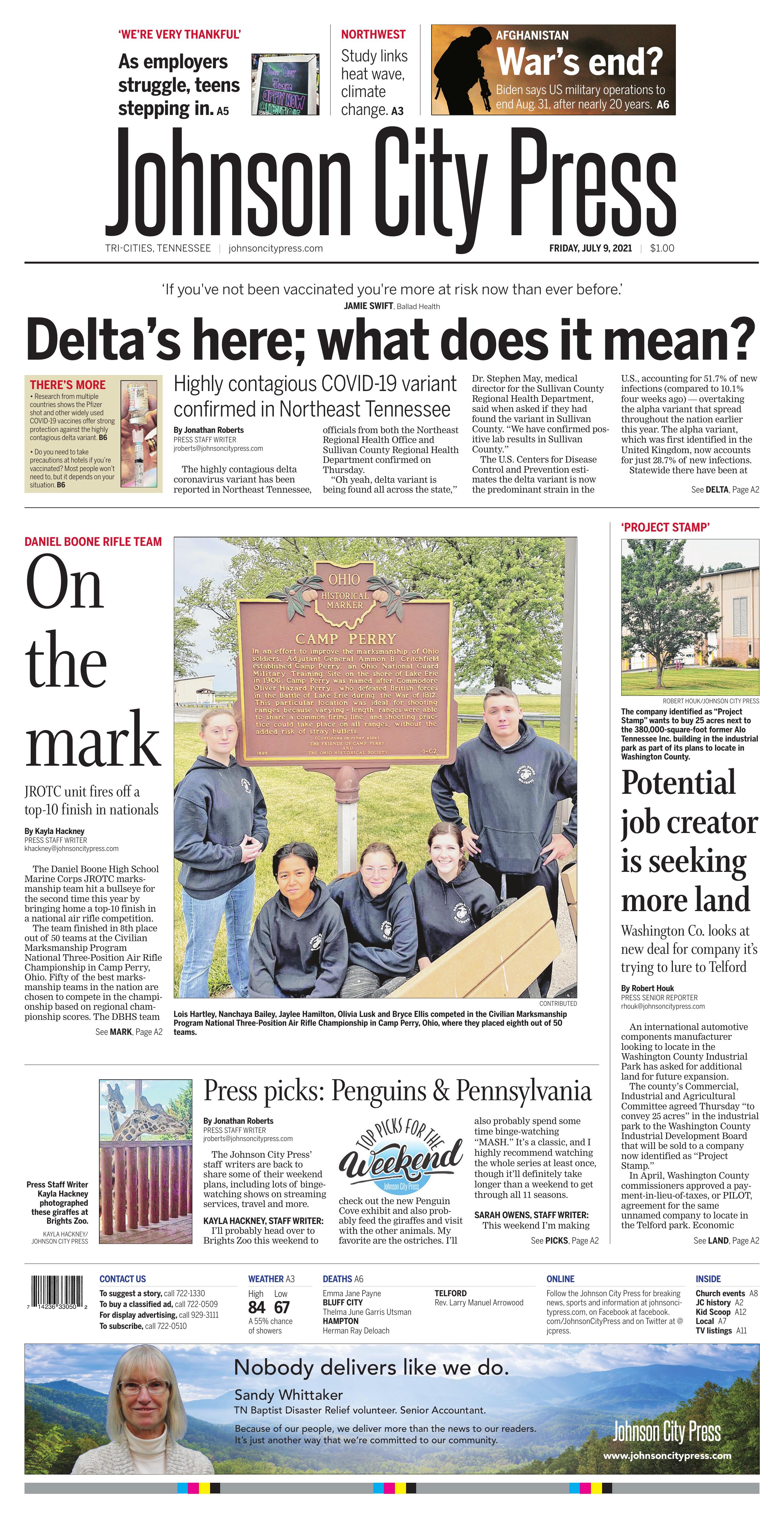 FILE - In this June 22, 2021, file photo, retired RN Barbara Vicente administers a shot of the Pfizer vaccine to Bobbie Guillette, 68, from Austin, Texas, at a clinic at Mother's Brewing Company in Springfield, Mo. The latest alarming coronavirus variant, the delta variant, is exploiting low global vaccination rates and a rush to ease pandemic restrictions, adding new urgency to the drive to get more shots in arms and slow its supercharged spread.

The highly contagious delta coronavirus variant has been reported in Northeast Tennessee, officials from both the Northeast Regional Health Office and Sullivan County Regional Health Department confirmed on Thursday.

The U.S. Centers for Disease Control and Prevention estimates the delta variant is now the predominant strain in the U.S., accounting for 51.7% of new infections (compared to 10.1% four weeks ago) — overtaking the alpha variant that spread throughout the nation earlier this year. The alpha variant, which was first identified in the United Kingdom, now accounts for just 28.7% of new infections.

Statewide there have been at least 27 reported cases of the delta variant, a likely undercount as there isn’t widespread genetic testing of virus samples. The Northeast Regional Health Office, which oversees seven of the region’s eight counties, confirmed at least one case, while May did not say how many Sullivan County has seen thus far.

While new novel coronavirus cases, hospitalizations and deaths are on pace to hit monthly lows not seen in a year, variants are again a top concern for health officials in Northeast Tennessee.

“I’m extremely concerned for our unvaccinated populations,” said Jamie Swift, Ballad Health chief infection prevention officer. “To this point, I think some have felt that false sense of security that they’ve made it through without infection, but I’m really trying to get the message out any way I can that if you’ve not been vaccinated you’re more at risk now than ever before.”

And while the region is unlikely to see the explosion in infections, hospitalizations and deaths that it saw over the winter, it’s likely the region will see an increase in infections in the coming weeks and months, particularly as students return to classrooms and large-scale events continue. May said once the virus gains a foothold in the region, it will become the dominant strain.

“With our low rates of vaccination, it certainly could set up for a cluster or outbreak within our region,” May said. “I don’t think we’re going to see anything like we saw back in December, but certainly there’s still a lot of people that are susceptible who have not been vaccinated, and it poses increased risk for them.”

May went on to say now is the time to seek the vaccine, and that once the variant starts circulating widely in the region it may be too late.

“It’s almost a little late once you have delta variant circulating widely — getting a vaccine in the middle of it, you may not be able to mount enough immunity to protect you,” May said, asking those who won’t get the vaccine to at least continue following public health guidance.

Swift said her concern for the region is “pretty high” as the variant arrives while large events will be taking place — even those held outdoors, as the delta variant may be able to spread outdoors better than other strains.

“I think people just need to understand it really is, at this point, a race between delta and vaccines,” Swift said. “I do not think we will reach numbers that we reached in December and January in this region — I don’t expect 400 patients to be in the hospital in the next month or so. I do expect numbers to go up, and what that means is those aren’t just numbers, those are lives of people in this region.

“There will be deaths, and those deaths are preventable.”

Arts-entertainment
Press Picks: Staff share what they're doing this weekend, including traveling, binge-watching and more

Hackney's boyfriend poses for a photo with the ostriches during a visit to Brights Zoo.

The Johnson City Press’ staff writers are back to share some of their weekend plans, including lots of binge-watching shows on streaming services, travel and more.

I’ll probably head over to Brights Zoo this weekend to check out the new Penguin Cove exhibit and also probably feed the giraffes and visit with the other animals. My favorite are the ostriches. I’ll also probably spend some time binge-watching “MASH.” It’s a classic, and I highly recommend watching the whole series at least once, though it’ll definitely take longer than a weekend to get through all 11 seasons.

This weekend I’m making the seven-hour drive to Slippery Rock, Pennsylvania, to visit a friend from college. It’s a long drive, but I’m excited to see my friend and take in some new scenery along the way.

I’m headed to the Atlantic Coast this weekend, just in time for Tropical Storm Elsa to dump loads of rain on us. At least part of the time, I’m expecting to be stuck inside, so I’m taking a copy of the punk-rock autobiography “NOFX: The Hepatitis Bathtub and Other Stories” to take me back to my formative years.

I’m going to continue reading a great book that I started: “I’ll be Gone in the Dark” by Michelle McNamara. It’s a piece of nonfiction that traces McNamara’s search for the Golden State Killer, a murderer who terrorized California in the 1970s and 80s.

Depending on the weather, I might float on the Nolichucky unless adulting gets in the way.

Depending on the weather, I might try and head to downtown Jonesborough to visit some of the shops. If it’s storming like my handy-dandy weather app expects it to be, I’ll probably stay home and get some cleaning done around the house and, hopefully, try and catch up on the million things I have saved on my watch list on Netflix, Hulu and HBO Max. Maybe even Disney+ if I feel like diving into “Loki” this weekend.

Lois Hartley, Olivia Lusk, Bryce Ellis, Jaycee Hamilton and Nanchaya Bailey competed in the Civilian Marksmanship Program National Three-Position Air Rifle Championship in Camp Perry, Ohio, where they placed 8 out of 50 of the top teams in the nation.

The team finished in 8th place out of 50 teams at the Civilian Marksmanship Program National Three-Position Air Rifle Championship in Camp Perry, Ohio. Fifty of the best marksmanship teams in the nation are chosen to compete in the championship based on regional championship scores. The DBHS team qualified after winning first place in the Tennessee state championship.

Though the national competition was held in Ohio, viewers could go online and watch the competition from anywhere.

“It kind of felt like we were at home because everybody was watching,” team member Lois Hartley said.

The team was made up of Hartley, Olivia Lusk, Bryce Ellis, Jaylee Hamilton and Nanchaya Bailey. Bailey, an upcoming sophomore at DBHS, was added to the competition team after the state championship.

“She had actually been shooting really well in all of our practices,” said Lusk. “So, because she kept getting super high scores, we were like ‘Yeah, might as well. Let’s let her have this experience.’”

Both Bailey and Ellis shot their personal best at the national championship. Ellis also earned a bronze CMP marksmanship Junior Distinguished Shooter badge while Hartley earned gold at the national competition, though the team members say personal scores and achievements take a backseat to the overall team score.

“You really just think about just doing the best that you can, because your score goes to the team score, so trying to do the best for yourself and everyone else,” said Hamilton.

Lusk, Hartley and Ellis, who all graduated in May, said ending their senior year with the top 10 finish is bittersweet.

“We put in so much time and so much effort and we practiced at least twice a week for the past four years, and having that finally come to an end is definitely strange because it’s all you’ve known, but it’s also kind of exciting because you get to see what you get to move onto next,” said Lusk.

Hamilton and Bailey said that meeting the high bar set by their departing teammates is stressful, but that they’re ready to pick up where the graduates left off.

“So three of our best friends are leaving, which is really sad, but also stressful, because now we’re being thrown into team A and everyone that is really good is gone,” said Hamilton. “So now we have to pick up where they left off, and it’s kind of scary but it’s exciting.”

The company identified as "Project Stamp" wants to purchase 25 acres adjacent to the 380,000-square-foot former Alo Tennessee Inc. building in the industrial park as part of its plans to locate in Washington County.

An international automotive components manufacturer looking to locate in the Washington County Industrial Park has asked for additional land for future expansion.

The county’s Commercial, Industrial and Agricultural Committee agreed Thursday “to convey 25 acres” in the industrial park to the Washington County Industrial Development Board that will be sold to a company now identified as “Project Stamp.”

In April, Washington County commissioners approved a payment-in-lieu-of-taxes, or PILOT, agreement for the same unnamed company to locate in the Telford park. Economic development officials say the agreement could result in 206 new jobs coming to Washington County.

The company — with 26 production facilities in 10 countries — is looking at sites in Tennessee, Michigan and Ohio to locate its first plant in the United States. It has narrowed its search to include the vacant 380,000-square-foot former Alo Tennessee Inc. building in the industrial park.

Alicia Summers, vice president of business development for the Northeast Tennessee Regional Economic Partnership, said Thursday the county should learn of the company’s decision on its new location within “the next 30 days.”

The company, which manufactures bumpers, doors and other automobile components, hopes to begin production in the United States by the first quarter of 2022.

Summers said the company has been doing its “due diligence” in negotiating the purchase of the privately owned Alo building in the industrial park.

Economic development officials say “Project Stamp” plans a two-phase, $145 million capital development in Telford that will begin with 117 new jobs and wrap up in 2027 with an additional 89 jobs created.

Under the terms of the PILOT, the company would be responsible for submitting reports of new jobs created and their annual wages on Jan. 31, 2022. The agreement requires the company to have created 90%, or 105, of its projected 117 new jobs in Phase I by Dec. 31, 2025.

Those jobs are expected to pay an average wage of at least $17 an hour. Failure to meet those terms would result in the company having to repay 50% of the PILOT benefits it has received.

Phase II will require the company to have created 90% of its promised 206 jobs, at a minimum hourly wage of $17, by Dec. 31, 2027. Failure to meet those terms will force the company to repay 50% of its benefits from the PILOT.

Summers told members of the CIA committee the prospective company has asked to purchase 25 additional acres in the industrial park for a possible Phase III development in the future. She said the company “feels strongly” that it must have control of that property for expansion.

The county will give the industrial development board the option to sell the company the nearby acreage it needs in the park at a total purchase price of $312,500.

The terms of the purchase require the company to begin construction at the site within 36 months of the deal. The purchase will be structured in three annual payments.

Summers said the property deal is an option, and not part of an incentive package.

Commissioner Phil Carriger, who chairs the committee, said he thinks the county is giving the company a “good price on the property.” As a result, Carriger said he would not be pleased if the company returns later to ask for tax abatement on its expansion at the site.