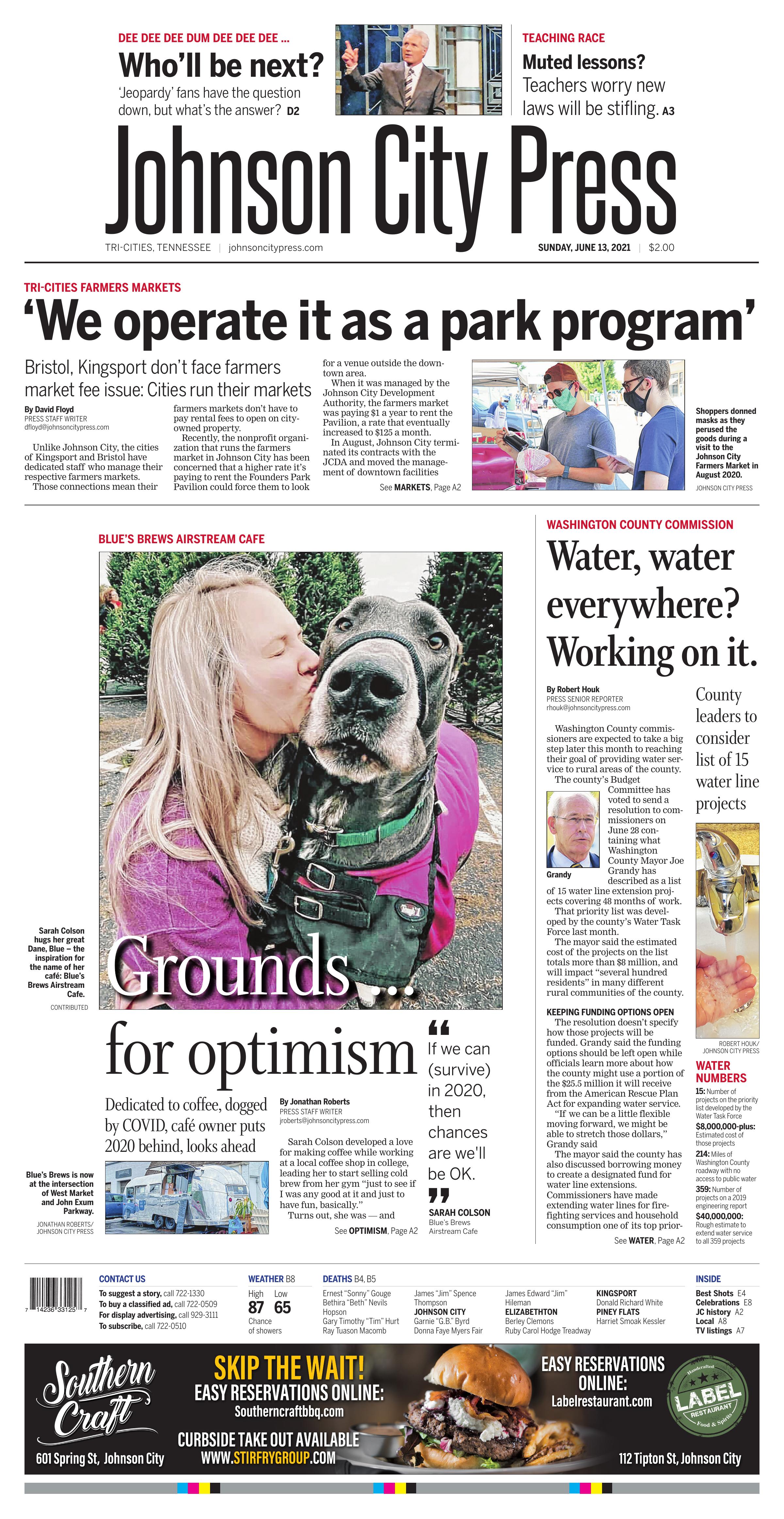 FILE--Afton farmer Gloria Dunbar puts out strawberries, blueberries, green beans and other items at the Johnson City Farmers Market in the Pavilion at Founders Park in downtown Johnson City.

Unlike Johnson City, the cities of Kingsport and Bristol have dedicated staff who manage their respective farmers markets.

Those connections mean their farmers markets don’t have to pay rental fees to open on city-owned property.

Recently, the nonprofit organization that runs the farmers market in Johnson City has been concerned that a higher rate it’s paying to rent the Founders Park Pavilion could force them to look for a venue outside the downtown area.

When it was managed by the Johnson City Development Authority, the farmers market was paying $1 a year to rent the Pavilion, a rate that eventually increased to $125 a month.

In August, Johnson City terminated its contracts with the JCDA and moved the management of downtown facilities in-house. In May, the City Commission approved an updated fee structure for downtown facilities, which maintained the same rates charged under the JCDA but added a 50% discount for certified nonprofits.

Now, under the updated fee structure, Johnson City’s nonprofit farmers market is paying $150 a day to rent space at the downtown Pavilion, which includes the 50% discount. The nonprofit derives funding from a $12 per day fee charged to vendors and a $40 yearly membership fee.

At the Founders Park pavilion, city staff put out signs the day before the farmers market to deter people from parking in the pavilion overnight. Oftentimes vehicles left at the facility have to be towed. Employees also clean the pavilion and its bathrooms, empty trash and conduct landscaping.

Shoun said the city would have to take into account staffing and resources if it were to operate a farmers market. That could include setting aside a staff person to manage vendors and ensure the market is running smoothly.

She added that city staff had multiple conversations with the farmers market organizers leading up to its opening about what would constitute a fair rate. The idea for the 50% discount started as a result of those conversations, which Shoun said the farmers market indicated would be manageable before the fee was approved by the commission. She said the organization afterward reconsidered.

“Everyone wants a thriving farmers market downtown,” Shoun said. “No one wants to see that go away. Our intent with the conversations thus far has been and will continue to be trying to make that happen.”

How do neighboring cities operate their farmers markets?

In Kingsport, program administrator Kristie Leonard said the farmers market is operated by the city.

There is a rental fee for people to use the city’s farmers market pavilion, such as for weddings or other events, but there is no fee for the farmers market program itself. On average, the Kingsport market has around 50 vendors at the pavilion, and most of them pay a per-day rate.

The State Street Farmers Market in Bristol, Tennessee, is also city-run and is organized by staff in the parks and recreation department.

In Bristol, the only fees are booth rentals that vendors pay to reserve space. Vendors pay a $60 fee to reserve a spot for the entire season, which includes a table and chairs provided by the city. Because it’s city-run, the farmers market program does not pay a rental fee to use the space.

Traditionally, the market has been situated at the Downtown Center on State Street, which is classified as a city park, but during the COVID-19 pandemic, the market has operated out of a large municipal parking lot near City Hall, which allows for social distancing.

Terry Napier, the director of Bristol’s parks and recreation department, said the city treats its farmers market like it does a swimming pool or golf course.

“There’s a minimal user fee, but we operate it as a park program,” he said. “I think it’s mutually beneficial to everybody.”

Sarah Colson and her dog Blue.

Sarah Colson developed a love for making coffee while working at a local coffee shop in college, leading her to start selling cold brew from her gym “just to see if I was any good at it and just to have fun, basically.”

Turns out, she was — and people loved it.

In Colson’s words, “it kind of snowballed from there” and her and her husband began thinking of opening their own coffee shop. Financially, a standalone brick-and-mortar store was out of reach, so they started thinking of alternatives — landing on the idea of opening a coffee bus, and began searching for the right one to convert.

Then, Colson’s friend sent her a listing for a 1957 Airstream trailer that was already converted to a cafe. The problem? It was all the way in California.

Not wanting to let it slip away, the trailer was towed all the way to Johnson City last January, and Blue’s Brews Airstream Cafe — named for Colson’s 6-year-old Great Dane, Blue — was born. And in March, Blue’s Brews opened up shop in the parking lot of Frannie’s Vegan Cafe in Boones Creek.

Just days later, however, Tennessee Gov. Bill Lee issued a safer-at-home order, leading many businesses to close their doors. Blue’s Brews remained open though, by virtue of its to-go operating model and, of course, being located outdoors.

“It was horrible,” Colson said that moment. “I doubted everything. The past year and a half, I have worked through more self-doubt than I ever imagined would be an issue. I was so excited, and it was so cool to see this community come together and just love us with their dollars — there’s a huge difference between someone saying you should do this and someone handing you money, saying we believe in you, we want your coffee and I know this is really scary and hard but we’re still going to spend our money here.

“It was simultaneously terrifying and unbelievably humbling,” Colson continued.

Despite the doubts, and the unknowns surrounding the virus, Colson said “I put my work shoes on and washed my hands and started making coffee because there was nothing else to do.”

Things were moving along well until Colson was infected with COVID-19 in July and forced to shut down her shop for two weeks, though she said fortunately none of her employees were sickened as they had all began wearing masks at work by that point.

Despite the challenges they faced in 2020, they survived the year: “If we can (survive) in 2020, then chances are we’ll be OK,” said Colson.

In the first month of 2021, Blue’s Brews relocated to the Cookie Crate’s parking lot at the intersection of West Market Street and John Exum Parkway, where they can capitalize on passing traffic at one of the city’s busiest intersections. Looking back at the past year-and-a-half, Colson thanked the community for its support throughout the pandemic, and said she was looking forward to the day things are, more or less, fully back to normal.

“That’s kind of exciting for me because when that day comes, we’re really going to be in the running — we’re really going to have to get people here, not just because we’re outdoors and to-go, or because people are like ‘She started a business in 2020,’ but because we have the best coffee in Johnson City,” Colson said. “That’s going to present a whole new set of challenges, and I’m excited for that day.”

You can check out Blue’s Brews Airstream Cafe on Instagram and Facebook, or visit its trailer located at 529 W. Market St. in Johnson City.

Washington County commissioners will consider a resolution later this month to proceed with a list of waterline extension projects totaling $8 million in rural communities of the county. A 2019 engineering report prepared by Tysinger, Hampton & Partners Inc. found Washington County has 214 miles of roadway with no access to public water.

Washington County commissioners are expected to take a big step later this month to reaching their goal of providing water service to rural areas of the county.

The county’s Budget Committee has voted to send a resolution to commissioners on June 28 containing what Washington County Mayor Joe Grandy has described as a list of 15 water line extension projects covering 48 months of work.

That priority list was developed by the county’s Water Task Force last month.

The mayor said the estimated cost of the projects on the list totals more than $8 million, and will impact “several hundred residents” in many different rural communities of the county.

The resolution doesn’t specify how those projects will be funded. Grandy said the funding options should be left open while officials learn more about how the county might use a portion of the $25.5 million it will receive from the American Rescue Plan Act for expanding water service.

“If we can be a little flexible moving forward, we might be able to stretch those dollars,” Grandy said

The mayor said the county has also discussed borrowing money to create a designated fund for water line extensions. Commissioners have made extending water lines for firefighting services and household consumption one of its top priorities.

Commissioner Freddie Malone said moving forward on the water line extensions will “help the county stay ahead of the game” in terms of securing funding and buying materials for those infrastructure projects.

Commissioner Jim Wheeler agreed, adding that by leaving its funding options open, the county is “thinking outside the box.” He also noted it is wise to spread the water projects throughout the rural areas of the county so that all 15 commissioners can see “the extent of the problem.”

A 2019 engineering report prepared by Tysinger, Hampton & Partners Inc. found Washington County has 214 miles of roadway with no access to public water. County officials have estimated it would cost nearly $40 million to extend water service to all 359 projects listed in the engineering report.

The water line resolution going before commissioners also includes a recommendation by the Water Task Force for the county to establish a seven-person water line installation crew to be supervised by the town of Jonesborough. The county’s annual cost for the crew is estimated to be $587,500 for both labor and equipment.

Grandy said the water line crew could help cut the county’s costs by nearly a half for installation and will speed up work on pending projects. The crews would work on extending water lines in areas served by Jonesborough’s utility district, such as in the Dry Creek community, Greenwood Drive, Ralph Hoss Road and Malone Hollow Road areas.

Among other projects on the task force’s list is one in an area served by the city of Kingsport to extend a water line in the Double Springs Road to reach 32 residents. The list also includes projects in the city of Johnson City’s regional water service area, including Grassy Valley, Bill Bennett and Hartmantown roads.