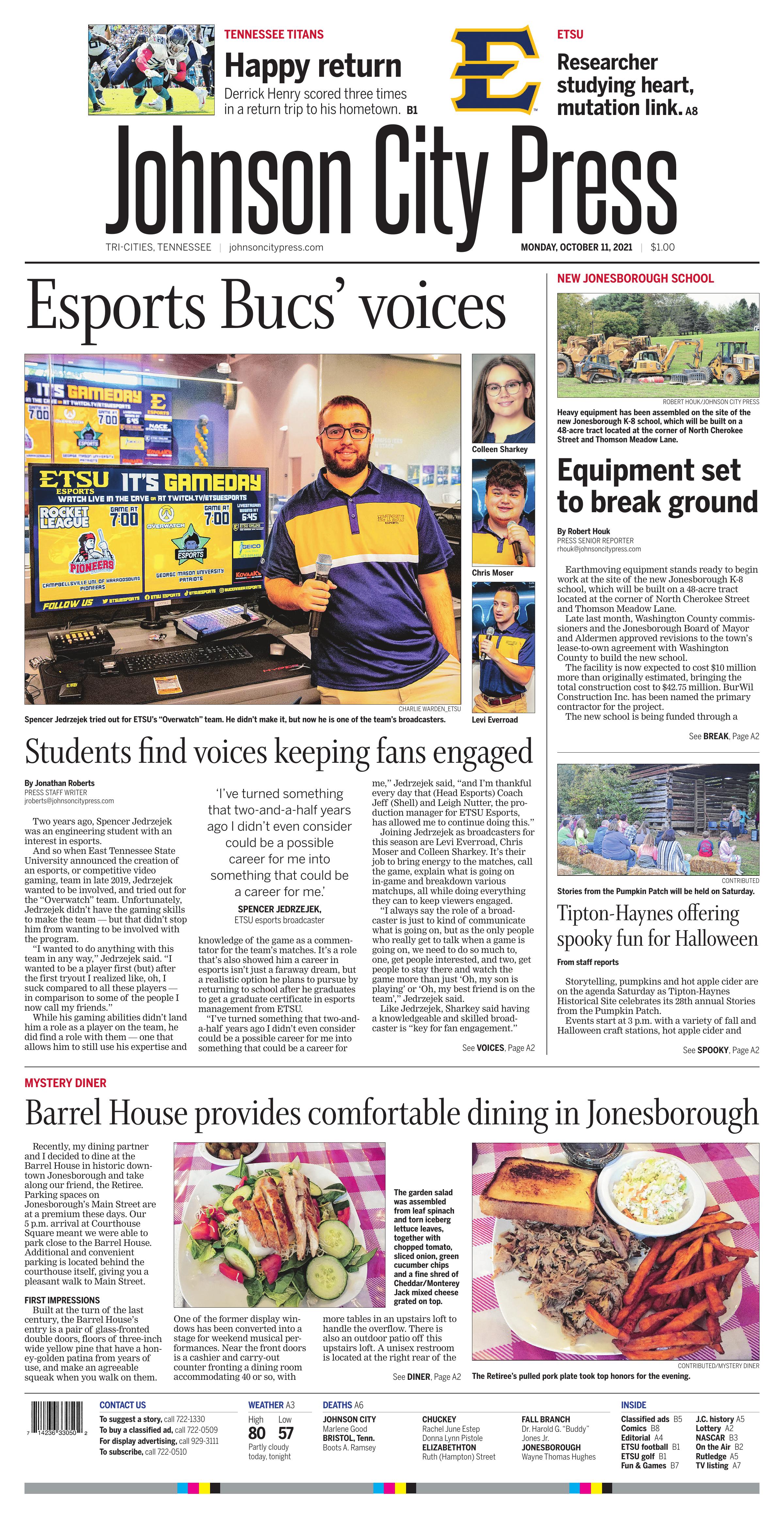 Spencer Jedrzejek tried out for ETSU’s “Overwatch” team. He didn’t make it, but now he is one of the team’s broadcasters.

Two years ago, Spencer Jedrzejek was an engineering student with an interest in esports.

And so when East Tennessee State University announced the creation of an esports, or competitive video gaming, team in late 2019, Jedrzejek wanted to be involved, and tried out for the “Overwatch” team. Unfortunately, Jedrzejek didn’t have the gaming skills to make the team — but that didn’t stop him from wanting to be involved with the program.

“I wanted to do anything with this team in any way,” Jedrzejek said. “I wanted to be a player first (but) after the first tryout I realized like, oh, I suck compared to all these players — in comparison to some of the people I now call my friends.”

While his gaming abilities didn’t land him a role as a player on the team, he did find a role with them — one that allows him to still use his expertise and knowledge of the game as a commentator for the team’s matches. It’s a role that’s also showed him a career in esports isn’t just a faraway dream, but a realistic option he plans to pursue by returning to school after he graduates to get a graduate certificate in esports management from ETSU.

“I’ve turned something that two-and-a-half years ago I didn’t even consider could be a possible career for me into something that could be a career for me,” Jedrzejek said, “and I’m thankful every day that (Head Esports) Coach Jeff (Shell) and Leigh Nutter, the production manager for ETSU Esports, has allowed me to continue doing this.”

Joining Jedrzejek as broadcasters for this season are Levi Everroad, Chris Moser and Colleen Sharkey. It’s their job to bring energy to the matches, call the game, explain what is going on in-game and breakdown various matchups, all while doing everything they can to keep viewers engaged.

“I always say the role of a broadcaster is just to kind of communicate what is going on, but as the only people who really get to talk when a game is going on, we need to do so much to, one, get people interested, and two, get people to stay there and watch the game more than just ‘Oh, my son is playing’ or ‘Oh, my best friend is on the team’,” Jedrzejek said.

Like Jedrzejek, Sharkey said having a knowledgeable and skilled broadcaster is “key for fan engagement.”

“The teams might be really good and the games that we play might be highly spectated, but we’re the gap that bridges that between them playing in the arena and people that are interested in viewing them,” said Sharkey.

Sharkey, a graduate student in ETSU’s Brand and Media Strategy program, said she has always been interested in gaming since her parents gifted her an original PlayStation two decades ago, but never expected it would lead her to commentating the games — something Sharkey also hopes to make a career out of.

“There are so many different avenues in esports besides playing that really encourage me to make it a profession,” said Sharkey, who also urged people to give esports a chance.

“I know it seems odd, it seems like a tight niche, but there’s a game for everyone in esports, and its something you can get involved in,” Sharkey said. “It’s big, it’s growing and its not going anywhere.”

The grilled chicken sandwich was deliciously seasoned and moist, topped by a frond of leaf lettuce, a sliced section of Texas White onion and some Alabama White barbecue sauce.

Recently, my dining partner and I decided to dine at the Barrel House in historic downtown Jonesborough and take along our friend, the Retiree. Parking spaces on Jonesborough’s Main Street are at a premium these days. Our 5 p.m. arrival at Courthouse Square meant we were able to park close to the Barrel House. Additional and convenient parking is located behind the courthouse itself, giving you a pleasant walk to Main Street.

Built at the turn of the last century, the Barrel House’s entry is a pair of glass-fronted double doors, floors of three-inch wide yellow pine that have a honey-golden patina from years of use, and make an agreeable squeak when you walk on them. One of the former display windows has been converted into a stage for weekend musical performances. Near the front doors is a cashier and carry-out counter fronting a dining room accommodating 40 or so, with more tables in an upstairs loft to handle the overflow. There is also an outdoor patio off this upstairs loft. A unisex restroom is located at the right rear of the downstairs dining room.

The Barrel House operates as both a restaurant and as a tavern. In addition to the food menu, the Barrel House also has a beer and wine list that includes a variety of strong waters. Their competently handled carry-out service is sure to get your order right and ready on time. If you are coming for the music on Friday and Saturday nights, be advised that there is a $5 cover charge. Décor is what I term “1890s General Store;” there is enough old-timey merchandise here along with some genuine antiques like the old Coca Cola ice chest perched over the front door, to stock Lum & Abner’s original “Jot-Em Down Store.”

After being seated by our friendly server Marissa, my two supper companions held an inquest on which of them would order what.

Meanwhile, wanting something light, I chose a Barrell House Garden Salad ($10.99) topped with grilled chicken ($3 extra), and sided with an a la carte order of fried okra ($2.99). For my salad dressing, I asked Marissa to bring me some of Barrel House’s Alabama White barbecue sauce. My dining partner also chose chicken, in the form of a grilled chicken sandwich ($11.49) sided with coleslaw.

The Retiree opted for the Barrel House Pulled Pork Plate ($13.89) also with coleslaw and some sweet potato fries as her side items. The three of us had unsweetened ice tea with lemon for our supper’s libation.

I was very pleased with the garden salad Marissa set in front of me. Assembled from leaf spinach and torn iceberg lettuce leaves, together with chopped tomato, sliced onion, green cucumber chips and a fine shred of cheddar/Monterey Jack mixed cheese grated on top, my salad was both cold and crisp, and fresh as can be. The grilled chicken was also good, though its quantity on the plate was less than what I was expecting. I can heartily recommend using Barrel House Alabama White barbecue sauce as a salad dressing; it complemented everything that was on my plate.

My dining partner’s grilled chicken sandwich was very good, being deliciously seasoned and moist, topped by a frond of leaf lettuce, a sliced section of Texas White onion and some of my Alabama White barbecue sauce. The coleslaw was serviceable, though not especially noteworthy.

It was the Retiree’s pulled pork plate that took top honors for the evening. The Barrel House does a very good job of smoking their meats, imparting a complex mix of smoked-based flavors and textures to the pork. Barrel House correctly serves their pulled pork barbecue “in nature’s garb,” allowing the diner to apply what enrobing of sauce is deemed necessary.

The Retiree also had a word about Barrel House’s sweet potato fries.

That word was “yummy.”

If the service provided by the Barrel House is typical of that provided by the very friendly and capable Marissa, your dining here will be that much more of a pleasant experience.

The Jonesborough Barrel House is a great place to have a leisurely lunch or supper in comfortable surroundings.

Why not stop in, see and taste the next time you are visiting Tennessee’s Oldest Town?

Earthmoving equipment stands ready to begin work at the site of the new Jonesborough K-8 school, which will be built on a 48-acre tract located at the corner of North Cherokee Street and Thomson Meadow Lane.

The facility is now expected to cost $10 million more than originally estimated, bringing the total construction cost to $42.75 million. BurWil Construction Inc. has been named the primary contractor for the project.

The new school is being funded through a Rural Development loan from the U.S. Department of Agriculture.

Town leaders and county Board of Education members have given final approval to the school’s design, with the facility’s footprint reduced from around 150,000 square feet to 137,000 square feet to help offset some of the projected cost increase.

Stories from the Pumpkin Patch will be held on Saturday.

Storytelling, pumpkins and hot apple cider are on the agenda Saturday as Tipton-Haynes Historical Site celebrates its 28th annual Stories from the Pumpkin Patch.

Events start at 3 p.m. with a variety of fall and Halloween craft stations, hot apple cider and time to stroll the site and explore its ancient and spooky cave.

The Watauga Historical Association will be on site all day stirring the kettle to make some yummy apple butter that will be for sale. Several local vendors will be selling their homemade crafts while a handful of food trucks will allow visitors to have a picnic. Come and visit with representatives from other local historic sites and learn of the rich history of the area.

Mary Beth Hertz Photography will be setting up a fall decorated photo booth for family portraits, and there will be be hayrides by Johnson City Kubota.

The Appalachian Highland Celts will have a mysterious walking trail around the historic buildings. They will also be having a bake sale, which will give visitors the chance to go home with some delicious treats. Various candies and goodies will also be available for kids of all ages.

Admission is $5 per adult and $2.50 for children 12 and under. Members of Tipton-Haynes will be admitted free.