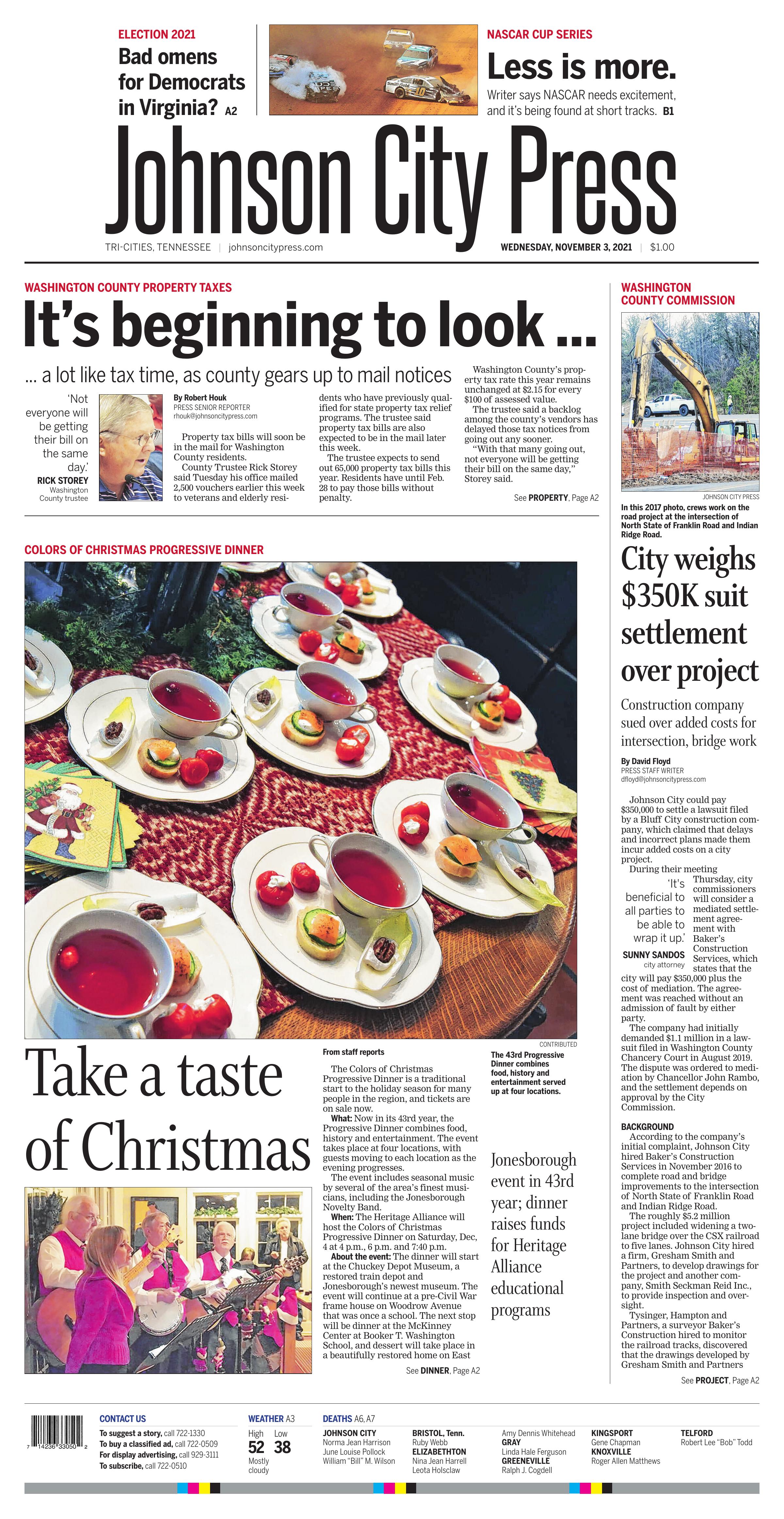 Property tax bills will soon be in the mail for Washington County residents.

County Trustee Rick Storey said Tuesday his office mailed 2,500 vouchers earlier this week to veterans and elderly residents who have previously qualified for state property tax relief programs. The trustee said property tax bills are also expected to be in the mail later this week.

The trustee expects to send out 65,000 property tax bills this year. Residents have until Feb. 28 to pay those bills without penalty.

Washington County’s property tax rate this year remains unchanged at $2.15 for every $100 of assessed value.

The trustee said a backlog among the county’s vendors has delayed those tax notices from going out any sooner.

“With that many going out, not everyone will be getting their bill on the same day,” Storey said.

The city of Johnson City has also sent out 29,911 property tax notices for the year. Those tax bills are due by Dec. 31. Penalty and interest will begin to accrue on Jan. 1.

Payments can also be made by phone at 877-768-5048 for a fee. The property tax bill number and a credit or debit card are required for this method of payment.

Where To Pay County Taxes

Washington County property taxes can be paid at the trustee’s offices at the Washington County Courthouse in downtown Jonesborough, and 378 Marketplace Blvd., Suite 1, Johnson City. Those offices are open weekdays from 8:30 a.m. to 4:30 p.m.

County taxes can also be paid at the following Bank of Tennessee branches:

Residents paying taxes at Bank of Tennessee locations must provide their tax notice to ensure it is properly processed. The bank will accept check or cash only.

The county does not profit from any of these charges.

The trustee’s office now allows taxpayers to make partial payments on their tax bills — paying in monthly increments instead of one lump sum — up to the penalty deadline. The county also allows monthly pre-payments on the next year’s property taxes.

Partial payments on now past-due 2020 property taxes can be paid until March 31. An interest penalty of 1.5% is added at the first of the month to all overdue taxes.

Any remaining balance on 2020 taxes will transfer to the Clerk and Master’s Office for collection on April 1.

The state provides property tax relief to elderly and disabled property owners. To qualify, a homeowner must be 65, or be totally and permanently disabled as rated by the Social Security Administration or other related agency.

Annual income for all property owners applying for tax relief must be less than $31,190. The state will pay as much as $141 on a participant’s tax bill, with the county making a similar match.

Tennessee also offers property tax relief for veterans and their widows or widowers. Veterans must qualify through the state’s Department of Veterans Services to be eligible to receive up to $845 from the state (along with a local match) for their property tax bills.

Property tax bills are calculated on state-mandated reappraisals that are used to set the assessed property tax values of houses and businesses. Property owners have a right to appeal all new appraisals to the county’s Equalization Board.

Taxpayers are asked to call the trustee’s office at 753-1602 if they have any questions about their tax bills or tax relief.

Now in its 43rd year, the Progressive Dinner combines food, history and entertainment.

The event takes place at four different locations and guests will move to each location as the evening progresses.

The event typically sells out, so get your tickets now.

The Colors of Christmas Progressive Dinner is a traditional start to the holiday season for many people in the region, and tickets are on sale now.

What: Now in its 43rd year, the Progressive Dinner combines food, history and entertainment. The event takes place at four locations, with guests moving to each location as the evening progresses.

The event includes seasonal music by several of the area’s finest musicians, including the Jonesborough Novelty Band.

About the event: The dinner will start at the Chuckey Depot Museum, a restored train depot and Jonesborough’s newest museum. The event will continue at a pre-Civil War frame house on Woodrow Avenue that was once a school. The next stop will be dinner at the McKinney Center at Booker T. Washington School, and dessert will take place in a beautifully restored home on East Main Street that has never been featured on the dinner before.

Get your tickets now: Ticket price is $100 per person and proceeds go toward the educational programs of the Heritage Alliance. Seating is limited, and the event typically sells out. Online ticketing is available at jonesborough.com/tickets.

Proceeds from the Progressive Dinner help ensure educational programs of the Heritage Alliance remain accessible to a wide range of audiences, and will benefit preservation and maintenance projects at the Oak Hill Schoolhouse.

The Heritage Alliance will continue to monitor CDC guidelines in regard to COVID-19 and events. If the event needs to cancel for health reasons, it will two weeks in advance.

About the Heritage Alliance: The Heritage Alliance is dedicated to the preservation of the architectural, historical, and cultural heritage of the region and to providing educational experiences related to history and heritage for a wide range of audiences. For more information, visit the website at heritageall.org or call the Alliance office at 423-753-9580.

In this 2017 photo, crews work on the road project at the intersection of North State of Franklin Road and Indian Ridge Road. Johnson City Press

In this 2017 file photo, crews work on a road project at the intersection of State of Franklin Road and Indian Ridge Road.

Johnson City could pay $350,000 to settle a lawsuit filed by a Bluff City construction company, which claimed that delays and incorrect plans made them incur added costs on a city project.

During their meeting Thursday, city commissioners will consider a mediated settlement agreement with Baker’s Construction Services, which states that the city will pay $350,000 plus the cost of mediation. The agreement was reached without an admission of fault by either party.

The company had initially demanded $1.1 million in a lawsuit filed in Washington County Chancery Court in August 2019. The dispute was ordered to mediation by Chancellor John Rambo, and the settlement depends on approval by the City Commission.

According to the company’s initial complaint, Johnson City hired Baker’s Construction Services in November 2016 to complete road and bridge improvements to the intersection of North State of Franklin Road and Indian Ridge Road.

The roughly $5.2 million project included widening a two-lane bridge over the CSX railroad to five lanes. Johnson City hired a firm, Gresham Smith and Partners, to develop drawings for the project and another company, Smith Seckman Reid Inc., to provide inspection and oversight.

Tysinger, Hampton and Partners, a surveyor Baker’s Construction hired to monitor the railroad tracks, discovered that the drawings developed by Gresham Smith and Partners had an incorrect elevation for the top of the existing rails, according the complaint. The plans were off by about one foot compared to actual site conditions, a circumstance called a “grade bust.”

That error, the company said, impacted multiple parts of the project and made it necessary for them to complete corrections in the field, which caused extra labor and changed the type of work called for under their contract.

Because of inaccuracies in the drawings, the complaint said, Baker’s Construction was told designs for a retaining wall would need to be redesigned and resubmitted for approval by CSX and the Tennessee Department of Transportation.

The complaint said those drawings were submitted to Smith Seckman Reid, the city’s representative on the project, on Nov. 8, 2017. On Jan. 10, roughly two months later, Baker’s Construction was told during a bi-weekly progress meeting that the firm hadn’t yet forwarded the designs to TDOT, according to the complaint. The company said they ultimately received official sign off from TDOT and CSX on Feb. 15.

“Given the defective plans, the changes required to the plans and the character of construction necessitated by the grade bust, the project schedule was impacted and (Baker’s Construction Services) was forced to expend additional time and additional costs in the amount of $1,094,315.54, through no fault of its own,” the complaint states.

Johnson City, the company claimed, “refused” to provide Baker’s Construction Services with a change order to compensate the company for increased costs or provide for additional time.

In a July 11, 2019, letter to the company’s lawyers, City Attorney Sunny Sandos said Johnson City had already paid the company about $50,000 more than originally agreed. At the time, the final payment was about $5,222,046, which was based on seven change orders approved by both parties.

Sandos said Tuesday the settlement agreement is the best outcome for the city but added that officials are “very adamant” that the delays were not the result of the city’s actions.

Sandos added there is still a dispute about who is responsible for the delays that resulted from the grade bust, but she noted that there are many other factors that go into deciding whether to take a case to trial, which is expensive.

“Sometimes it’s a balance of being a fiduciary to taxpayer dollars to what makes the most sense from a financial standpoint to bring the matter to a close,” Sandos said.

Even if the city won a trial in Chancery Court, there could still be an appeal, she said.

“If it went through trial, you could potentially be looking at another 18 months to two years, which incurs additional litigation expenses for both sides,” Sandos said. “It’s beneficial to all parties to be able to wrap it up.”