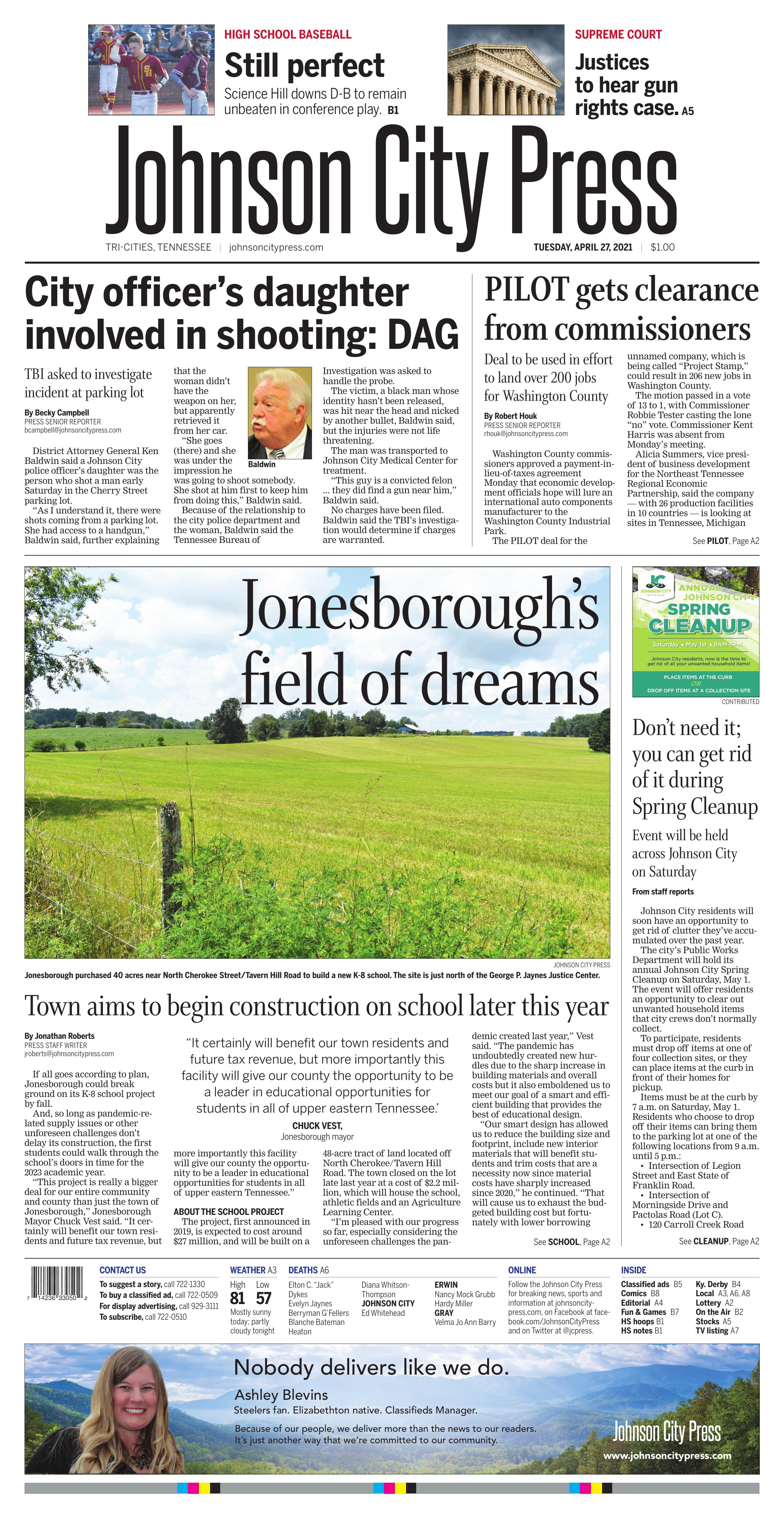 “As I understand it, there were shots coming from a parking lot. She had access to a handgun,” Baldwin said, further explaining that the woman didn’t have the weapon on her, but apparently retrieved it from her car.

“She goes (there) and she was under the impression he was going to shoot somebody. She shot at him first to keep him from doing this,” Baldwin said.

Because of the relationship to the city police department and the woman, Baldwin said the Tennessee Bureau of Investigation was asked to handle the probe.

The victim, a black man whose identity hasn’t been released, was hit near the head and nicked by another bullet, Baldwin said, but the injuries were not life threatening.

The man was transported to Johnson City Medical Center for treatment.

“This guy is a convicted felon ... they did find a gun near him,” Baldwin said.

No charges have been filed. Baldwin said the TBI’s investigation would determine if charges are warranted.

If all goes according to plan, Jonesborough could break ground on its K-8 school project by fall.

And, so long as pandemic-related supply issues or other unforeseen challenges don’t delay its construction, the first students could walk through the school’s doors in time for the 2023 academic year.

“This project is really a bigger deal for our entire community and county than just the town of Jonesborough,” Jonesborough Mayor Chuck Vest said. “It certainly will benefit our town residents and future tax revenue, but more importantly this facility will give our county the opportunity to be a leader in educational opportunities for students in all of upper eastern Tennessee.”

About the school project

The project, first announced in 2019, is expected to cost around $27 million, and will be built on a 48-acre tract of land located off North Cherokee/Tavern Hill Road. The town closed on the lot late last year at a cost of $2.2 million, which will house the school, athletic fields and an Agriculture Learning Center.

“I’m pleased with our progress so far, especially considering the unforeseen challenges the pandemic created last year,” Vest said. “The pandemic has undoubtedly created new hurdles due to the sharp increase in building materials and overall costs but it also emboldened us to meet our goal of a smart and efficient building that provides the best of educational design.

“Our smart design has allowed us to reduce the building size and footprint, include new interior materials that will benefit students and trim costs that are a necessity now since material costs have sharply increased since 2020,” he continued. “That will cause us to exhaust the budgeted building cost but fortunately with lower borrowing costs the debt service will offer some potential flexibility.”

The school initially had a projected cost of about $28 million before some changes to the building’s design, namely a 7,000-square-foot size reduction, lowered the project cost by $1 million to $1.5 million. Town Administrator Glenn Rosenoff said the town is waiting to hear back from the U.S. Department of Agriculture on approval for its contracts before they’re sent out for requests for proposals, a process that could be completed by the end of the month.

Rosenoff said they’ve done well at following their timeline, and said the town could break ground in August, after getting those contracts approved and sorting through whatever bids are submitted. 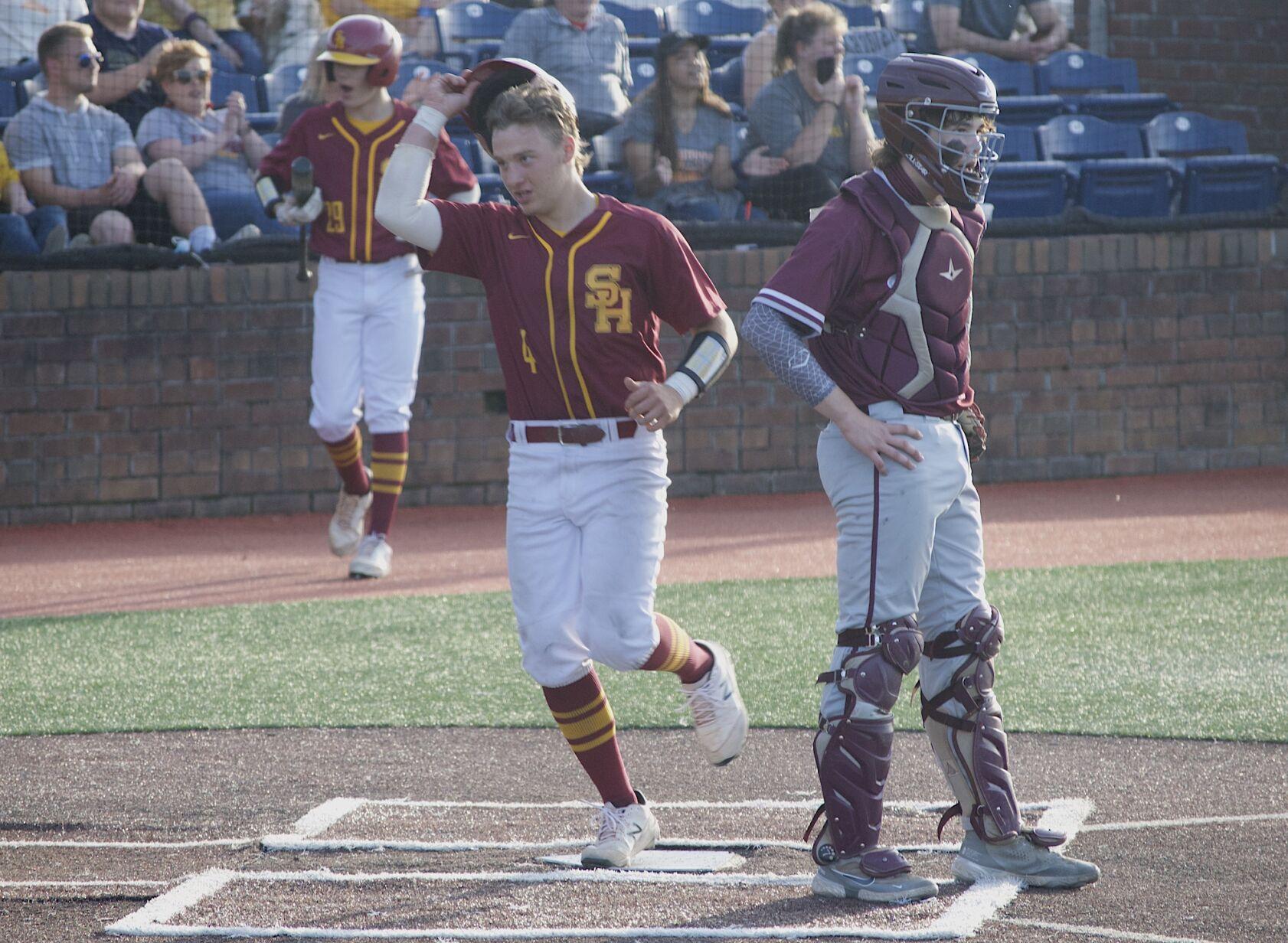 Science Hill’s Jaxon Diamond comes in to score in the third inning. He reached base four times and scored three times.

An international automotive metal stamped components manufacturer is looking for a tax abatement deal to locate a plant in the former Alo building in the Washington County Industrial  Park in Telford.

The PILOT deal for the unnamed company, which is being called “Project Stamp,” could result in 206 new jobs in Washington County.

The motion passed in a vote of 13 to 1, with Commissioner Robbie Tester casting the lone “no” vote. Commissioner Kent Harris was absent from Monday’s meeting.

Alicia Summers, vice president of business development for the Northeast Tennessee Regional Economic Partnership, said the company — with 26 production facilities in 10 countries — is looking at sites in Tennessee, Michigan and Ohio to locate its first plant in the United States.

The vacant privately owned 380,000-square-foot former Alo Tennessee Inc. building in the Telford industrial park is one of two locations the company is exploring in Tennessee.

Summers told commissioners she expects the company will to announce a decision on its new location within “the next 30 days.” The company, which manufactures bumpers, doors and other automobile components, hopes to begin production in the United States by the first quarter of 2022.

“I’m very optimistic,” Summers said of the county’s chances of landing the company.

Economic development officials say “Project Stamp” plans a two-phase $145 million capital development in Telford that will begin with 117 new jobs and wrap up in 2027 with an additional 89 jobs created.

Summers told commissioners the jobs will pay an average annual salary of $35,000.

Under the terms of the PILOT, the company would be responsible for submitting reports of new jobs created and their annual wages on Jan. 31, 2022. The agreement requires the company to have created 90%, or 105, of its projected 117 new jobs in Phase I by Dec. 31, 2025.

Those jobs are expected to pay an average wage of at least $17 an hour. Failure to meet those terms would result in the company having to repay 50% of the PILOT benefits it has received.

Phase II will require the company to have created 90% of its promised 206 jobs, at a minimum hourly wage of $17, by Dec. 31, 2027. Failure to meet those terms will force the company to repay 50% of its benefits from the PILOT.

Meanwhile, Summers said the company’s real property in the industrial park will remain on the county’s property tax rolls.

In other business Monday:

Moody’s also noted that Washington County’s median family income of $65,662 is 85% of the U.S. median. Grandy said the goal of the county is to bring in jobs that are higher than that average median.

Mathes, who retired from the Washington County Sheriff’s Office in 2020, was one of the organizers of the Nolichuckey VFD in 1972. He served as its chief from 1974 until his retirement in 2008. 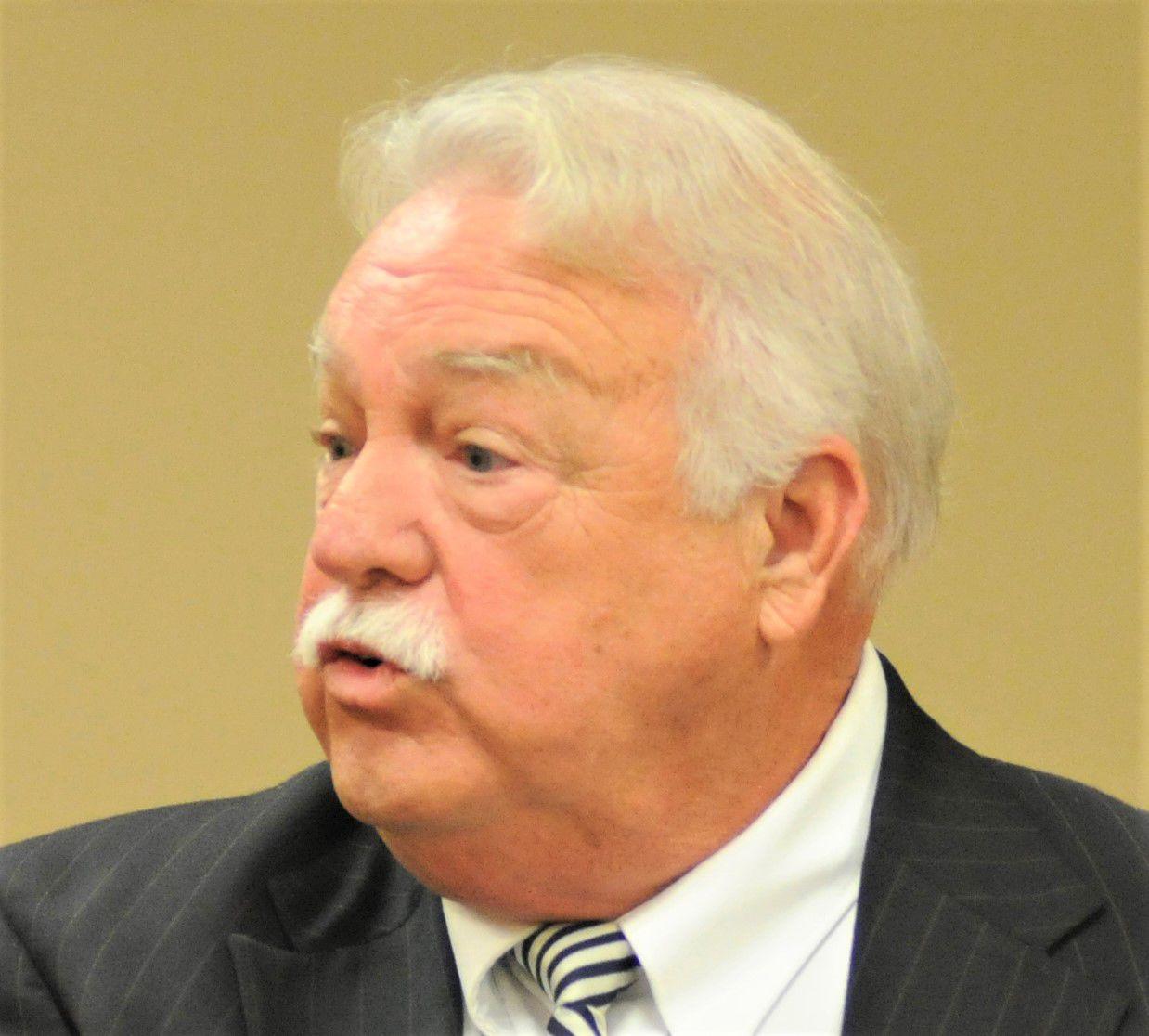 Event will be held across Johnson City on Saturday

Johnson City residents will soon have an opportunity to get rid of clutter they’ve accumulated over the past year.

The city’s Public Works Department will hold its annual Johnson City Spring Cleanup on Saturday, May 1. The event will offer residents an opportunity to clear out unwanted household items that city crews don’t normally collect.

To participate, residents must drop off items at one of four collection sites, or they can place items at the curb in front of their homes for pickup.

Items must be at the curb by 7 a.m. on Saturday, May 1. Residents who choose to drop off their items can bring them to the parking lot at one of the following locations from 9 a.m. until 5 p.m.:

Examples of acceptable items include recyclables like metals, e-waste, cardboard, aluminum and paper as well as non-recyclables like tires, air conditioning units, paint and other items that aren’t normally collected by city crews.

Bulk items normally collected by city crews, like mattresses and furniture, will be accepted. Paint must be sealed, and if it is placed at the curb for pickup, it must be set to the side of other waste.

Hazardous materials are prohibited, and loads larger than pickup trucks will not be allowed.