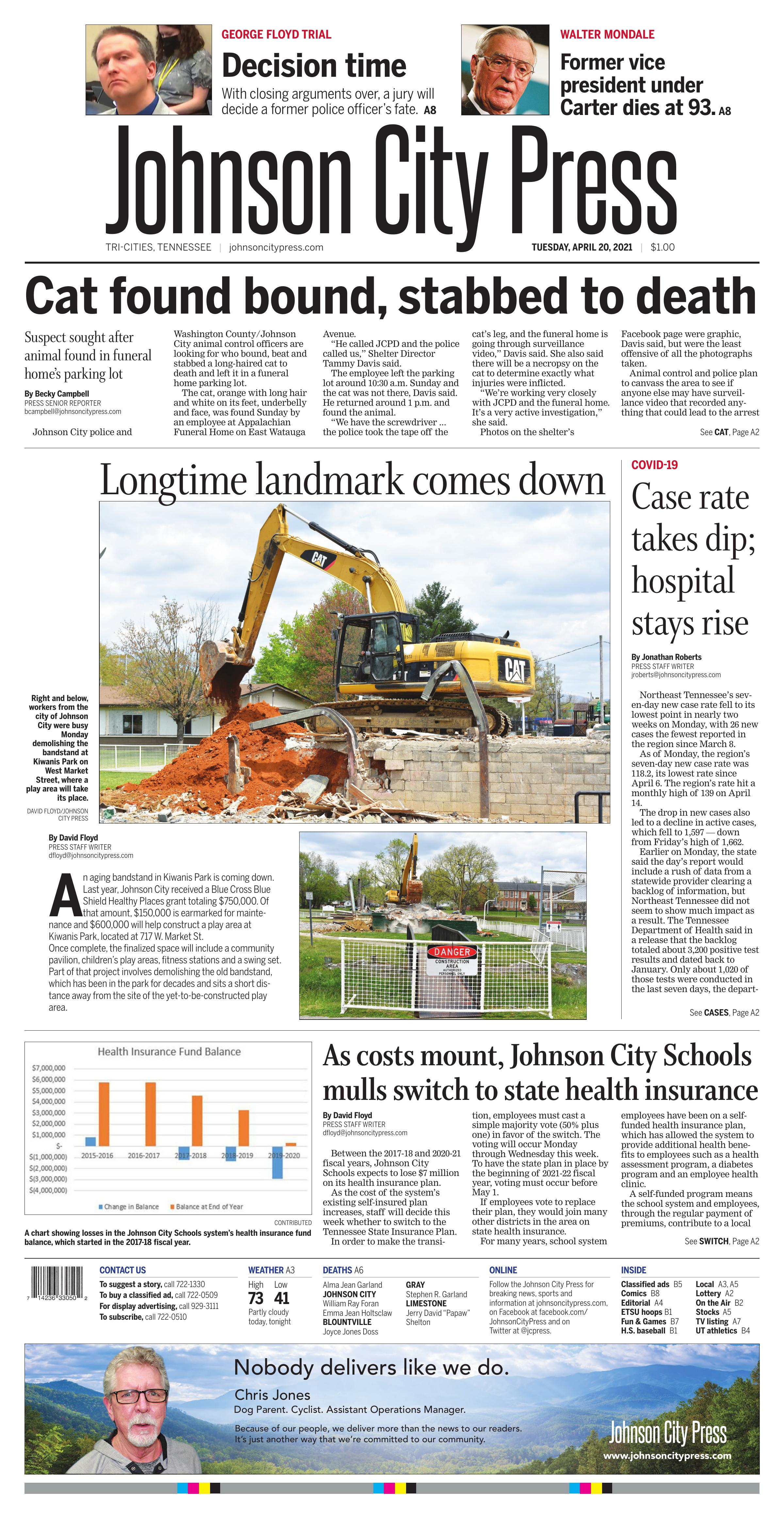 Johnson City police and Washington County/Johnson City animal control officers are looking for who bound, beat and stabbed a long-haired cat to death and left it in a funeral home parking lot.

The cat, orange with long hair and white on its feet, underbelly and face, was found Sunday by an employee at Appalachian Funeral Home on East Watauga Avenue.

“He called JCPD and the police called us,” Shelter Director Tammy Davis said.

The employee left the parking lot around 10:30 a.m. Sunday and the cat was not there, Davis said. He returned around 1 p.m. and found the animal.

“We have the screwdriver ... the police took the tape off the cat’s leg, and the funeral home is going through surveillance video,” Davis said. She also said there will be a necropsy on the cat to determine exactly what injuries were inflicted.

Photos on the shelter’s Facebook page were graphic, Davis said, but were the least offensive of all the photographs taken.

Animal control and police plan to canvass the area to see if anyone else may have surveillance video that recorded anything that could lead to the arrest of the responsible person.

“Unfortunately we see animal cruelty cases every week at the shelter,” Davis said. “This was more disturbing because it was deliberate. It was intentional. It’s someone who bound this cat, abused it and killed it and then they left it where it would be found.”

Davis said it was also upsetting because the shelter had a great turnout for its kitten shower donation event on Saturday.

“We went from an amazing day on Saturday, seeing the good in our community. And then it’s disappointing to see that the following day, we see this.”

Anyone with information about the crime can call the Johnson City Police Department’s Criminal Investigation Division at 423-434-6166. For those wishing to remain anonymous, information can be sent by calling Crimestoppers at 423-434-6158. Anonymous tips can also be submitted by texting 423JCPD and your tip to 847411 (TIP411) or submitted via the internet at www.citizenobserver.com.

Johnson City Schools has launched an application for its virtual academy.

As the cost of the system’s existing self-insured plan increases, staff will decide this week whether to switch to the Tennessee State Insurance Plan.

In order to make the transition, employees must cast a simple majority vote (50% plus one) in favor of the switch. The voting will occur Monday through Wednesday this week. To have the state plan in place by the beginning of 2021-22 fiscal year, voting must occur before May 1.

If employees vote to replace their plan, they would join many other districts in the area on state health insurance.

For many years, school system employees have been on a self-funded health insurance plan, which has allowed the system to provide additional health benefits to employees such as a health assessment program, a diabetes program and an employee health clinic.

A self-funded program means the school system and employees, through the regular payment of premiums, contribute to a local insurance fund that pays all claims for any enrolled members. Blue Cross Blue Shield of Tennessee manages the plan. 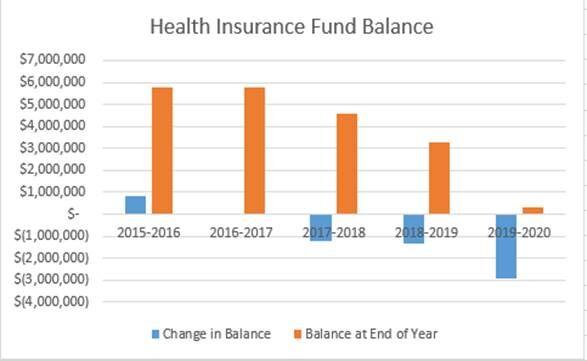 A chart showing losses in the Johnson City Schools system’s health insurance fund balance, which started in the 2017-18 fiscal year.

In an email to staff last Thursday, Human Resources Director Lee Patterson explained that the system has had to increase premiums for employees in recent years because of the ever-increasing costs of programs and the escalating costs of employee medical claims.

Finance Director Leia Valley said people on the self-insured plan have encountered more chronic conditions, which has increased the cost of claims, and there has been a large jump in the system’s pharmacy costs.

At the beginning of the 2020-21 school year, the system raised premiums by 10% and increased maximum out-of-pocket payouts.

While the system has increased premiums annually over the last few years, Patterson said, the additional money generated has not been enough to keep up with a more than 40% increase in costs since 2017.

“To be very frank, the balance of our Johnson City Schools Insurance Fund has been depleted,” Patterson wrote.

As of March, the Johnson City Board of Education has had to transfer roughly $2 million from its general purpose fund balance to make up the shortage in the insurance fund.

Looking at what the insurance fund would require in the 2021-22 school year to remain solvent, system leaders determined they would need to increase premiums by 54-64%.

“This would mean for the first time in the history (sic) that our Johnson City Schools Insurance Plan would be a higher cost than that of the Tennessee State Insurance Plan,” Patterson wrote. “We knew that this high increase would not be acceptable or beneficial for our school system employees.”

A chart showing losses in the Johnson City Schools system’s health insurance fund balance, which started in the 2017-18 fiscal year.

That prompted system leaders to consider cost-saving programs and look at the state’s plan as an alternative.

Patterson said the system’s management and professional collaborative conferencing teams, which includes administrators and teachers, ultimately determined that moving employees to the state plan was the best option.

Among other reasons, it has had minimal cost increases over the last several years, has less risk of depleting its fund balance and it will offer continued coverage for retirees.

Moving to the state plan will, however, mean that employees will see a 24-34% increase in their premiums and lose programs that existed under the self-funded plan, namely the health assessment program, diabetes program and the health clinic.

“While we know that change is never easy, and it can be somewhat overwhelming, we feel this is our best option for all of our certified and classified employees and families,” Patterson wrote. “This is the best way to minimize current increases while also stabilizing minimal increases in the future.”

In this image from video, former Minneapolis police Officer Derek Chauvin listens as his defense attorney Eric Nelson gives closing arguments as Hennepin County Judge Peter Cahill preside Monday, April 19, 2021, in the trial of Chauvin at the Hennepin County Courthouse in Minneapolis. Chauvin is charged in the May 25, 2020 death of George Floyd.

An aging bandstand in Kiwanis Park is coming down.

FILE — In a March 14, 2005, file photo, former Vice President Walter Mondale speaks during the Second Annual Hoover-Wallace Dinner before receiving a Hoover-Wallace Humanitarian Leadership Award in Des Moines, Iowa. Mondale, a liberal icon who lost the most lopsided presidential election after bluntly telling voters to expect a tax increase if he won, died Monday, April 19, 2021. He was 93.

Northeast Tennessee’s seven-day new case rate fell to its lowest point in nearly two weeks on Monday, with 26 new cases the fewest reported in the region since March 8.

Earlier on Monday, the state said the day’s report would include a rush of data from a statewide provider clearing a backlog of information, but Northeast Tennessee did not seem to show much impact as a result. The Tennessee Department of Health said in a release that the backlog totaled about 3,200 positive test results and dated back to January. Only about 1,020 of those tests were conducted in the last seven days, the department said.

According to data from the TDH, most of the backlog cases were added in Blount, Davidson, Knox, Montgomery, Rutherford, Sumner, Williamson and Wilson counties. Tennessee added 4,181 new cases on Saturday as a result of the backlog, though the real number is likely between 1,000-2,000.

Monday’s rise in overall hospitalizations and critical care patients continued a trend that began in mid-March, with hospitalizations up 92.5% since March 15. During a press conference last week, Ballad’s Chief Operating Officer Eric Deaton warned that the system can’t handle another surge in hospitalizations.

“Simply put, we really cannot take another surge like we’ve seen in the past,” he said. “Our health system was really strained before, and we’re very concerned that we cannot sustain another strain.”

In-house modeling from Ballad projects hospitalizations could reach 150, which would be the most reported in the region since Jan. 28 (160).

Where Can I Vaccinated?