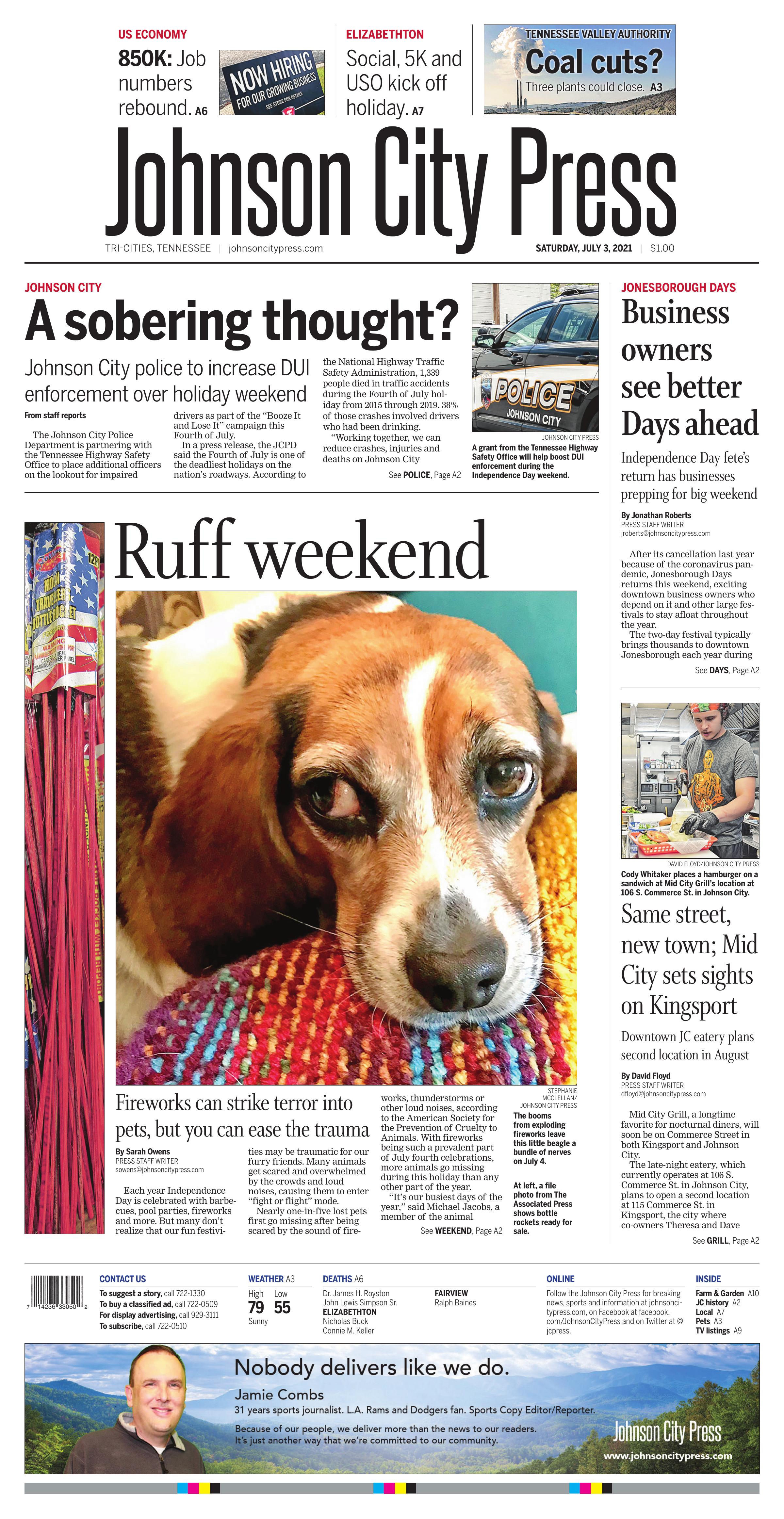 The Johnson City Police Department is partnering with the Tennessee Highway Safety Office to place additional officers on the lookout for impaired drivers as part of the “Booze It and Lose It” campaign this Fourth of July.

In a press release, the JCPD said the Fourth of July is one of the deadliest holidays on the nation’s roadways. According to the National Highway Traffic Safety Administration, 1,339 people died in traffic accidents during the Fourth of July holiday from 2015 through 2019. 38% of those crashes involved drivers who had been drinking.

“Working together, we can reduce crashes, injuries and deaths on Johnson City roadways,” the department said in the release. “JCPD and THSO want to remind all drivers that impaired driving is not only illegal, it is a matter of life and death. When celebrating the Fourth of July holiday the decision to not drink and drive should never be a tough one.”

The department reminds drivers that buzzed driving is drunk driving. It asks that motorists designate a sober driver or plan a ride service ahead of time. Don’t let friends drive drunk, and if you see an impaired driver on the road, call 911.

In Tennessee, the consequences of a single DUI conviction for first-time offenders could include fines, court costs, legal fees, jail time, mandatory drug and alcohol treatment or the installation of an ignition interlock device in their vehicle.

The safety office provides grant funding to support the Johnson City department’s increased enforcement efforts during the “Booze It and Lose It” campaign. For more information about the Tennessee Highway Safety Office, visit www.tntrafficsafety.org.

The booms from exploding fireworks leave this little beagle a bundle of nerves on July 4.

The ASPCA reminds pet owners to keep an eye on pets during crowded events and to keep them in a quiet and secure area during thunderstorms or firework displays with this shareable graphic.

Each year Independence Day is celebrated with barbecues, pool parties, fireworks and more. But many don’t realize that our fun festivities may be traumatic for our furry friends. Many animals get scared and overwhelmed by the crowds and loud noises, causing them to enter “fight or flight” mode.

Nearly one-in-five lost pets first go missing after being scared by the sound of fireworks, thunderstorms or other loud noises, according to the American Society for the Prevention of Cruelty to Animals. With fireworks being such a prevalent part of July fourth celebrations, more animals go missing during this holiday than any other part of the year.

“It’s our busiest days of the year,” said Michael Jacobs, a member of the animal control/intake team at the Washington County Animal Shelter. “We always have to have extra staff on July fifth.”

Jacobs recommends keeping dogs inside, playing soft music or turning the TV on to cover the sound of fireworks, possibly giving your pets a relaxer, and keeping them as comfortable as possible. He notes that if you do take them outside, make sure they are on a leash.

Halee Robinson, a program assistant at the Humane Society of Washington County, also advises pet owners not to shoot fireworks from their own property if possible.

”Fireworks can be pretty traumatic for dogs; they don’t like them at all,” Robinson said.

The American Society for the Prevention of Cruelty to Animals reiterates both Jacobs’ and Robinson’s advice to keep pets inside in a secure environment and away from fireworks. They also suggest never leaving alcoholic beverages unattended, only using animal-safe products on your pets and keeping an eye on matches and lighter fluids.

It is also recommended to keep your pets on their normal diet and to keep them away from items such as glow sticks or citronella candles that may be toxic or cause choking. For the full list of tips, please visit www.aspca.org/pet-care/general-pet-care/fourth-july-safety-tips .

While most of this information refers to dogs, it is important to note that some cats may also get overwhelmed or spooked by fireworks or crowds.

Luckily, most cats are more likely to hide than attempt an escape, but checking on them and having soothing music playing to distract from the sound of fireworks may be helpful.

In the event that your pet does go missing, be sure to check your local shelters in the following days in case they were found or turned in. The American Society for the Prevention of Cruelty to Animals also developed an interactive mobile app that provides users with a specialized search plan based on information they provide about their pet’s behaviors and individual circumstances.

The app can be downloaded for free from the App Store for iPhone devices and on Googleplay for Android devices.

As the holiday weekend approaches, make the appropriate plans for your pets and be sure to update any identification tags or microchip information. Refrain from taking your pets along to firework displays and other crowded events and make sure your furry friends are comfortable, secure, and taken care of this Fourth of July.

A band plays on the Main Stage during a previous Jonesborough Days Festival.

After its cancellation last year because of the coronavirus pandemic, Jonesborough Days returns this weekend, exciting downtown business owners who depend on it and other large festivals to stay afloat throughout the year.

The two-day festival typically brings thousands to downtown Jonesborough each year during the Fourth of July weekend. This year is the 50th iteration of the event.

“I feel like it’ll be the biggest crowd we’ve had in years, only because of COVID, and everybody wants to get out — all the restrictions have been dropped,” said Dean. “It’s just time to get back to normal life.”

And while the festival’s return is something to celebrate for Dean, he said he’s heading into this year’s festival severely short-staffed, with half the employees he’d have in a normal year.

“We’re just asking that all the festival-goers exercise extreme patience with my staff on waiting times and things like that, so that part of it is stressing me out, but I am looking forward to seeing the whole community around the East Tennessee area come out and enjoy this time-honored tradition of Jonesborough Days,” Dean said.

“We’re excited about seeing all the great visitors who come and visit with us, especially people that come back for family reunions,” said Wilhelm. “It’s just nice to see people gathering together again, and especially supporting local businesses as well.”

Down the street at East Tennessee Hemp Co., Tara Cooper was busy Friday morning ordering extra supplies and finishing preparations for the expected surge in customers this weekend. Cooper said last month’s celebration of Tennessee’s 225th birthday gave them a taste of what to expect this weekend.

“I’m glad for all the shops down here,” Cooper said. “It’s a great thing, and this is going to be the 50th year and that’s so exciting, but just having it I think it’s just huge and will give us back that kind of norm that we’ve been missing.”

Parks said she was a little disappointed with the festival not happening last year, but that she didn’t know what to expect in a year dominated by the pandemic. This year though, Parks said other business owners have told her to stock up ahead of the festival, and that they’ll likely be really busy.

“We’re hoping, and we’re excited about it,” Parks said.

Dave Garnett cuts a cucumber in the kitchen at Mid City Grill's location at 106 S. Commerce St. in Johnson City.

Cody Whitaker places a hamburger on a sandwich at Mid City Grill's location at 106 S. Commerce St. in Johnson City.

Mid City Grill, a longtime favorite for nocturnal diners, will soon be on Commerce Street in both Kingsport and Johnson City.

The late-night eatery, which currently operates at 106 S. Commerce St. in Johnson City, plans to open a second location at 115 Commerce St. in Kingsport, the city where co-owners Theresa and Dave Garnett live.

The owners, who include Dave’s brother Steven, hope to open the new location in August. They’re currently in the process of building out the kitchen, throwing up walls and preparing the restaurant’s bar.

The Garnetts plan to offer beer and liquor at the new location in Kingsport, something they don’t currently do in Johnson City. They’re anticipating that the menu will remain largely the same, but there’s the potential for some new offerings.

Dave and Steven have worked at Mid City off and on for about 16 years. The Garnetts bought the Johnson City restaurant from its original owner, Jeff Pike, in May 2019.

The restaurant recently reopened late-night dining on Fridays and Saturdays until 4 a.m., but it has discontinued its breakfast menu, which launched near the end of 2020 and was hampered by the pandemic.

“In the future we would love to do breakfast, but at that time it just didn’t work out,” Theresa said. “We didn’t get enough foot traffic to keep it going.”

Staffing continues to be the biggest challenge for Mid City Grill. Dave said the restaurant received 75 applications for cooks. He set up interviews with 70 people but none showed up.

He added that the restaurant has significantly raised its pay, starting out at $13 or $14 an hour. They’re still trying to fill about three positions.

Depending on how late-night goes, however, Dave expects the restaurant will be doing better than it was before the pandemic.

He’s excited to open a new location in Kingsport.

“I’ve always thought Mid City was kind of a big brand here but really underrated at the same time because a lot of people only knew it because of the late night aspect,” he said.

He added that it has been good to see lunch and dinner traffic grow even after pausing late night service, and the restaurant has already received tremendous support from people in Kingsport.