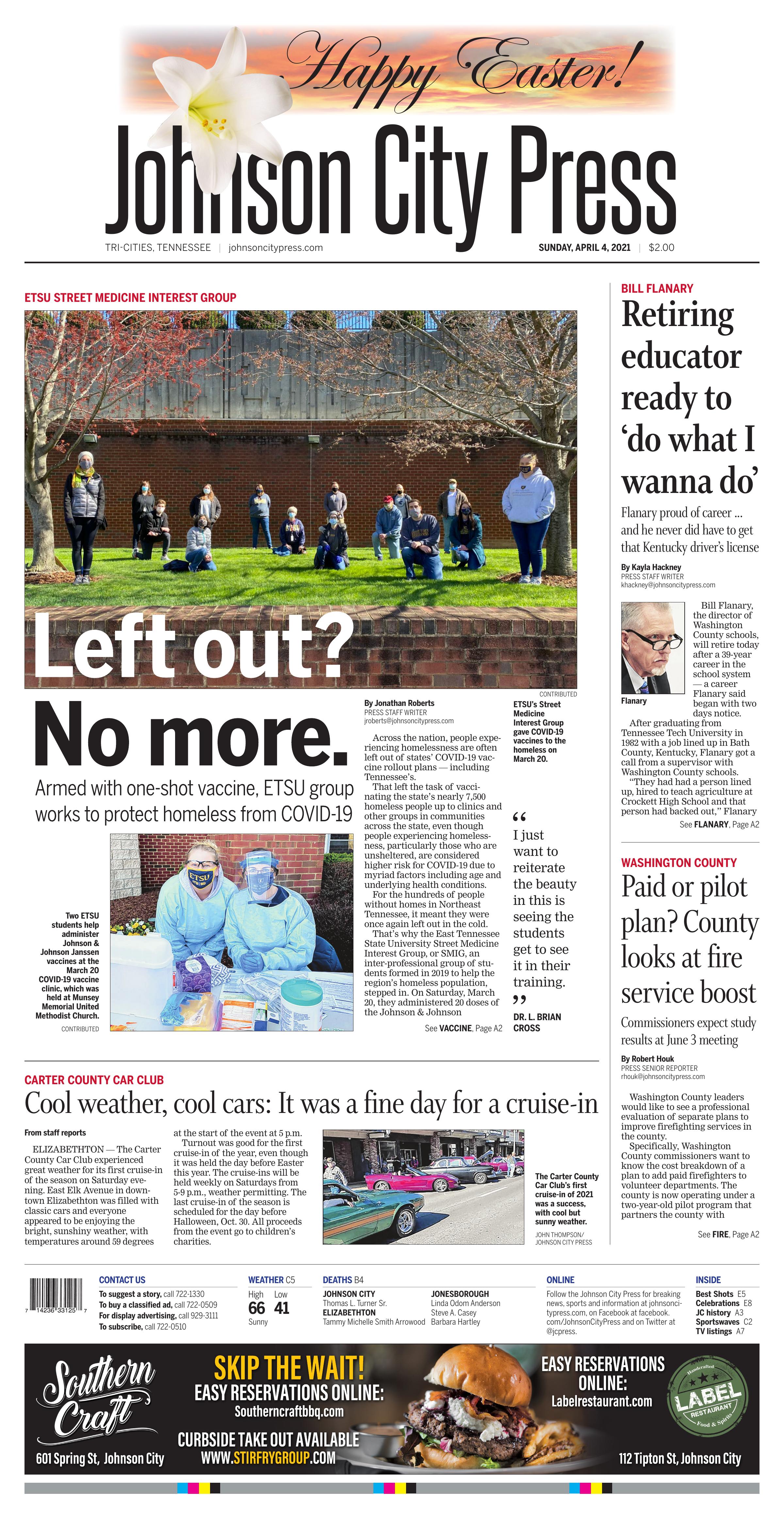 Two East Tennessee State University students helping to administer vaccines at a March 20 COVID-19 vaccine clinic for persons experiencing homelessness. The students are members of the Street Medicine Interest Group (SMIG) at ETSU, an interprofessional group made up of students from Quillen College of Medicine, Bill Gatton College of Pharmacy, College of Nursing, College of Public Health, and the College of Clinical and Rehabilitative Health Sciences. ETSU Health provided the Johnson & Johnson Janssen vaccines for the event.

Across the nation, people experiencing homelessness are often left out of states’ COVID-19 vaccine rollout plans — including Tennessee’s.

That left the task of vaccinating the state’s nearly 7,500 homeless people up to clinics and other groups in communities across the state, even though people experiencing homelessness, particularly those who are unsheltered, are considered higher risk for COVID-19 due to myriad factors including age and underlying health conditions.

For the hundreds of people without homes in Northeast Tennessee, it meant they were once again left out in the cold.

That’s why the East Tennessee State University Street Medicine Interest Group, or SMIG, an inter-professional group of students formed in 2019 to help the region’s homeless population, stepped in. On Saturday, March 20, they administered 20 doses of the Johnson & Johnson COVID-19 vaccine at a pop-up event outside Munsey Memorial United Methodist Church.

“It was like a miracle, really, that we even had vaccine in our hands,” said Dr. Patricia Amadio, the group’s faculty sponsor.

Amadio said discussions began in the fall about how to most effectively get vaccine to the homeless, where they debated the logistical concerns of administering a two-shot vaccine series to a largely transient population. Fortunately, the emergency-use authorization of Johnson & Johnson’s one-shot vaccine candidate erased those concerns — though Amadio and the group wondered, “are we ever going to get it?”

On Thursday, March 11, they found out they would be able to get a limited amount of vaccine from the university’s vaccine clinic to be held on March 20. On Monday, they relayed that information to the student organizers and enlisted 15 volunteers soon after.

But when they were given the 20 doses, they were also worried — worried that they might have too much vaccine.

“Amazingly enough, and I was quite surprised, I thought there was going to be so much vaccine hesitancy we were not going to be able to use all 20 vaccines, and indeed that was not the case,” said Dr. Jean Croce Hemphill, an associate professor in the College of Nursing and part of the group. “We had very nice engagement, the students all chipped in, and it was very well received.”

Johnson City Downtown Day Center Director Jennifer Whitehead said it’s important to both inoculate and educate those experiencing homelessness about the safety and efficacy of the vaccines.

“If they see others doing it, then they are more likely to (get vaccinated),” Whitehead said. “I met with several after that had the vaccine just to check up on them, see how they’re doing, are they’re having any symptoms, and I really reiterated to them, if you feel comfortable with it, please tell other people, tell them the side effects you had and how you’re feeling now and why you’re doing it because that’s what’s going to get more people to do this than just us coming up to them and (saying) this is the facts, this is what can happen.

“It’s really getting the whole population involved with it, and getting them to encourage each other to get this vaccine,” Whitehead said.

Amadio said the work to get homeless vaccinated is an act of solidarity, and serves to show them that they matter.

“With street outreach, I think one of the reasons it really appeals to all of us is that it’s sort of like — you know how people talk about meeting somebody where they are? This is the ultimate of that,” Amadio said.

Dr. L. Brian Cross, vice chair in the Bill Gatton Department of Pharmacy Practice at ETSU, said he hopes SMIG made an impact, however small, in the post-pandemic healing process through the vaccinations, and that the students involved take their experiences and use it to help underserved populations outside of the region.

“I just want to reiterate the beauty in this is seeing the students get to see it in their training,” Cross said. “I don’t think we’ll know for years what this has done to them. What I want to think is some of these students who have been part of this outreach, that they’re going to go touch underserved populations someplace else upon graduation — I think that’s obviously what we’d love, that we sort of create the cycles that go someplace else.”

And as more vaccine becomes available, particularly the one-shot Johnson & Johnson vaccine, the group hopes to receive more and continue partnering with organizations such as Munsey, the Salvation Army, ETSU Health and the Appalachia Regional Coalition on Homelessness, among others, to give as many people experiencing homelessness an opportunity to get vaccinated against the virus as possible.

“We’re kind of operating on faith,” said Amadio. “I believe that we are going to get some more vaccine. I’m hoping we get it with a little more notice so that we can make people aware that it’s happening so that people who interested will turn out. I’m hoping we’ll be able to have enough vaccine that we can do another event at Munsey and one at the Salvation Army, but it’s contingent on when we find out.”

The Carter County Car Club's first cruise-in of 2021 was a success, with cool but sunny weather.

ELIZABETHTON — The Carter County Car Club experienced great weather for its first cruise-in of the season on Saturday evening. East Elk Avenue in downtown Elizabethton was filled with classic cars and everyone appeared to be enjoying the bright, sunshiny weather, with temperatures around 59 degrees at the start of the event at 5 p.m.

Washington County Director of Schools Bill Flanary presents Jordan Hughes, principal of the pre-K-8 Boones Creek School, with a skateboard at a grand opening ceremony for the school in 2019. Flanary is retiring after 39 years with Washington County School System.

Bill Flanary, the director of Washington County schools, will retire today after a 39-year career in the school system — a career Flanary said began with two days notice.

After graduating from Tennessee Tech University in 1982 with a job lined up in Bath County, Kentucky, Flanary got a call from a supervisor with Washington County schools.

“They had had a person lined up, hired to teach agriculture at Crockett High School and that person had backed out,” Flanary said. “And they needed somebody in two days’ time and asked if I was interested in the job, and I decided to go with the Tennessee job instead of the Kentucky job because I didn’t want to have to get a Kentucky driver’s license.”

“I didn’t actually see myself as a teacher until I was halfway through college,” said Flanary. “I got involved in the collegiate chapter of the Future Farmers of America there at Tennessee Tech, and as part of that I became involved in training students in area high schools in livestock judging.”

Flanary graduated with a bachelor’s degree and a license to teach and got right to work.

As a teacher, Flanary had two students hold state office positions with the Future Farmers of America organization. Flanary himself was awarded the Honorary American FFA Degree.

“For an ag(riculture) teacher that’s kind of a big deal, and I was very proud of that,” Flanary said.

Flanary’s decision to accept the job in Washington County would pay off. Not only did he not have to get a new state driver’s license, but he would rise from the position of agriculture teacher to hold several supervisory roles before becoming the director of Washington County schools three years ago.

During his time as director, Washington County schools have set graduation rate records two years in a row and the school system is ranked 20th out of 146 in the state for achievement scores.

Post-retirement, Flanary said he has a long list of plans, including traveling and pursuing his hobby of scuba diving.

“I’ve got a long list but none of them involve regular office hours,” said Flanary. “I can say that I don’t want to be a five-day-a-week worker anymore. I wanna do what I wanna do as long as I can.”

Flanary said he is confident in the new director and believes Washington County schools will continue to succeed despite the post-pandemic challenges ahead.

Jerry Boyd, a former assistant commissioner in the Tennessee Department of Education, will succeed Flanary on Monday.

“I will enjoy watching the great success that Washington County has in the very near future,” Flanary said.

Fire trucks from the Gray Volunteer Fire Department respond to a staged vehicle crash at Daniel Boone High School in 2019 to remind students of the dangers of distracted driving.

Firefighters use an aerial platform to pour water on a shopping complex in Gray that was destroyed by fire in December. Four businesses, including the Sittin Bull Restaurant, were destroyed in the fire.

Washington County leaders would like to see a professional evaluation of separate plans to improve firefighting services in the county.

Specifically, Washington County commissioners want to know the cost breakdown of a plan to add paid firefighters to volunteer departments. The county is now operating under a two-year-old pilot program that partners the county with Washington County/Johnson City Emergency Medical Services for additional firefighting help.

County commissioners voted in March to pass a resolution asking Washington County Mayor Joe Grandy to engage the University of Tennessee’s County Technical Assistance Service and other related organizations, including the Washington County Fire Chief’s Association, to “develop information relevant to fire safety” and the employment of full-time firefighters in Washington County.

The results of that study are expected to be presented to commissioners at the June 3 meeting of the county’s Public Safety Committee.

Commissioner James Wheeler, who serves as chairman of that committee, told his colleagues last month that improving firefighting services would help county residents reduce the cost of their home insurance policies and “lighten the load for our volunteer fire departments.”

Background On The Issue

Washington County has had a partnership with EMS to cross train paramedics in firefighting services. The idea is for a paid EMS employee to be able to drive the pumper truck to a fire scene, allowing volunteer firefighters to respond directly to the location of the blaze.

This EMS partnership is being implemented at several volunteer fire departments that also serve as ambulance substations in Washington County.

Wheeler said this concept has helped improve response times to fire calls. In addition to driving the pumper truck, the EMS employee is also available to assist in fire suppression.

However, providing medical assistance at the fire scene remains the paramedic’s primary duty.

County officials say the pilot program has helped to augment the personnel levels of some volunteer departments that have had a difficult time in finding firefighters to respond to daytime calls.

Another Plan From Volunteer Firefighters

Washington County officials have also received a proposal from the Fall Branch Volunteer Fire Department to supplement firefighting services in Washington County. This plan calls for as many as two paid firefighters to be placed at each of the county’s volunteer departments.

Wheeler said the plan has raised many questions from commissioners that he hopes will be answered by the CTAS study. Among them is the cost of a paid firefighter plan in comparison to the pilot program, as well as sorting out the details of the likely command structure.

Washington County commissioners have made improving firefighting services, which includes adding fire hydrants and extending waterlines in the county, a top priority.