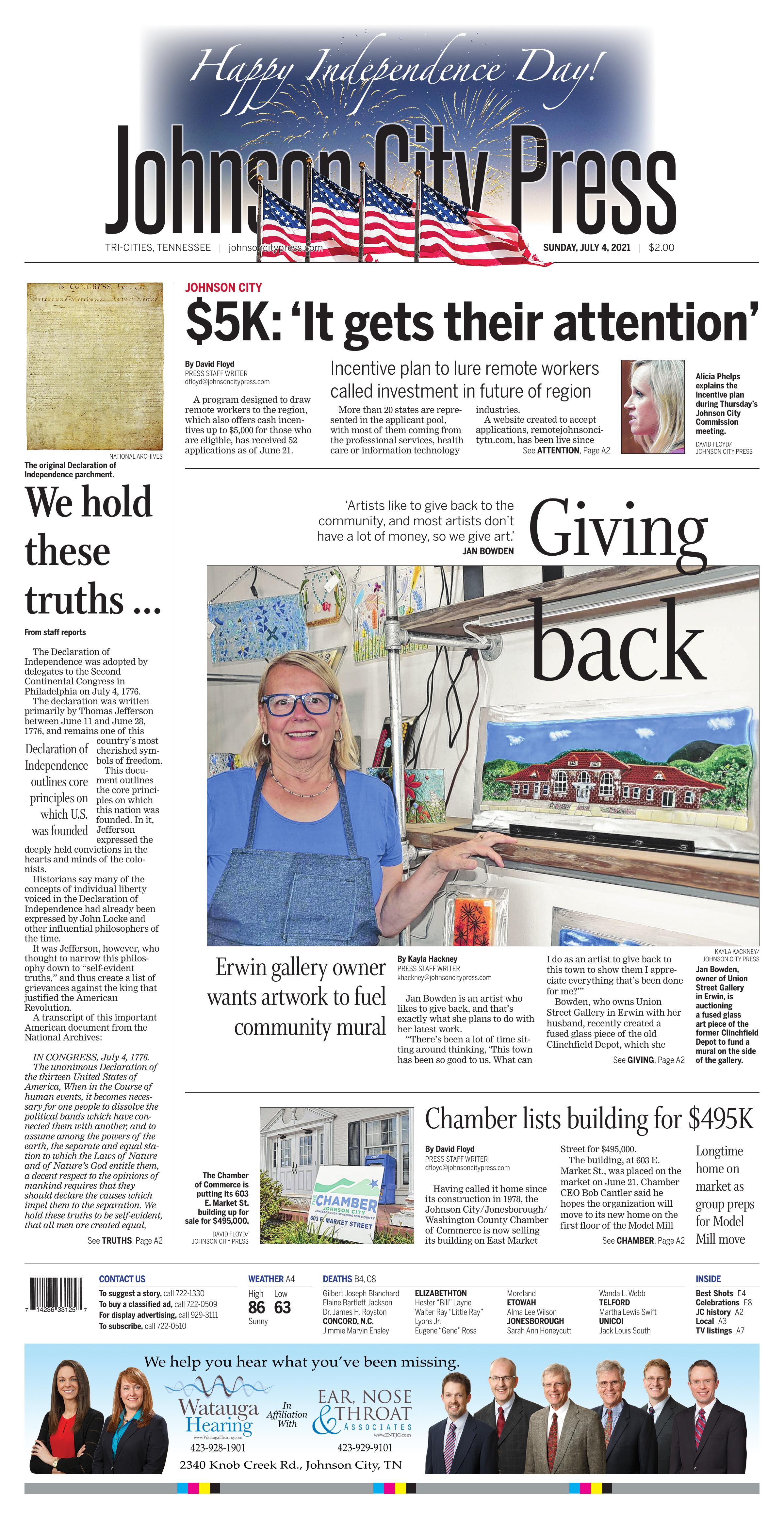 A pair of young cyclists prepare to take a spin at the Tannery Knobs Mountain Bike Park. Continuing investment in outdoor opportunities is one area the city hopes will lead to growth in the future.

A program designed to draw remote workers to the region, which also offers cash incentives up to $5,000 for those who are eligible, has received 52 applications as of June 21.

More than 20 states are represented in the applicant pool, with most of them coming from the professional services, health care or information technology industries.

A website created to accept applications, remotejohnsoncitytn.com, has been live since May 13, and marketing and promotion of the program started on June 7.

A selection committee will start going through names next week. Those selected will undergo a background screening, employment verification and will be invited for a visit.

“While that’s not really a lot of money when it comes to getting folks here, it gets their attention,” said Alicia Phelps, the executive director of the Northeast Tennessee Tourism Association. “We’ve seen that with pretty much all campaigns. They do that to get the attention, and it does help them with the move here.”

Aside from the cash incentives, participants will also be eligible to receive a $1,000 gift certificate toward the purchase of a bike or kayak, a free grill from Meco Grills, a discounted work space at Spark Plaza and discounted sporting goods.

To be eligible, applicants must relocate to Johnson City or Washington County within six months, be a full-time remote worker, have a minimum annual income of $50,000, be 24 or older and be committed to reside in the area for one year. They must also participate in networking meetings and events.

Phelps expects the program will attract 10 to 20 people in the first year-and-a-half. She noted that it will be important for them to be active members of the community.

“We are making an investment in the future of the area not just getting people to move here,” she said.

Mitch Miller, CEO of the Northeast Tennessee Regional Economic Partnership, said one of the most important aspects of the program is building an ecosystem for remote workers, which gives them an emotional incentive to stay here long-term.

He noted that the number of people recruited will ultimately depend on the amount of available funding and the income of participants.

Long-term, he said the number of people recruited for the program will depend on the market. Miller said employers are hearing more and more that their employees want the option to work remotely.

“These next two years, it’s a prime opportunity to capture those individuals, but I still think this is only going to increase,” Miller said.

Miller said someone making $50,000 a year has a $10,000 annual impact on the local economy, but he hopes that participants will have a ripple effect in the community, which could include partnering with other people on projects or getting involved in local nonprofits.

“You can’t just look at it from one individual,” he said. “It’s creating a community, creating an environment.”

Jan Bowden, owner of Union Street Gallery in Erwin, created a fused glass art piece of the former Clinchfield Depot, which now houses the Unicoi County Public Library. Bowden is auctioning the piece in order to fund a community mural on the side of the gallery.

Jan Bowden is an artist who likes to give back, and that’s exactly what she plans to do with her latest work.

“There’s been a lot of time sitting around thinking, ‘This town has been so good to us. What can I do as an artist to give back to this town to show them I appreciate everything that’s been done for me?’”

Bowden, who owns Union Street Gallery in Erwin with her husband, recently created a fused glass piece of the old Clinchfield Depot, which she plans to auction off to fund a public mural. The former depot is now the home of the Unicoi County Public Library.

“Every day I’m here, if I’m working or sitting, I see that beautiful building over there,” she said. “I did research on the building. It’s an iconic building, so during COVID, I thought ‘I’m gonna make that building in glass.’”

Bowden took a photograph of the building and traced the individual parts of the building on a clear transparency sheet. She then used the sheet to create the pieces of glass that would go into the art piece. After firing it four times in her kiln, her husband created a stand for it so the piece can be displayed either standing or on a wall.

The art piece is currently being auctioned off to fund a community mural outside of the gallery. Bidding on the piece is open and will run until July 31.

The mural, which will be on the side of the gallery facing Nolichucky Avenue, will feature a mountainous, outdoors scene.

“It will be an interactive mural, so you don’t just drive by,” said Bowden. “There will be a feature that you will want to take your photograph with.”

The public mural is Bowden’s way of giving back to the community she has called home for the past four years.

“Artists like to give back to the community, and most artists don’t have a lot of money, so we give art,” she said.

Having called it home since its construction in 1978, the Johnson City/Jonesborough/Washington County Chamber of Commerce is now selling its building on East Market Street for $495,000.

The building, at 603 E. Market St., was placed on the market on June 21. Chamber CEO Bob Cantler said he hopes the organization will move to its new home on the first floor of the Model Mill by the end of the year.

Cantler said the Chamber is currently working with Thomas Weems Architects to get its new space move-in ready. The buildout could take three to four months.

“It will be a state-of-the-art destination,” Cantler said.

The spot will have a conference room with multimedia functions, open and closed offices for staff, and meeting space.

“We’re trying to create the destination to tell the story of Johnson City when we’re recruiting and inviting people to come to our community,” Cantler said. “This would be the location where we’re telling our story.”

Back when it was planning on housing the Johnson City Convention and Visitors Bureau and the Northeast Tennessee Regional Economic Partnership, the Chamber was eyeing space on the Model Mill’s third or fourth floors.

The visitors bureau will be moving into the former Carolina, Clinchfield & Ohio Railway depot building alongside the Johnson City Development Authority and one or two employees from the city’s marketing department.

“It actually works well for us that we’re in a first-floor location,” Cantler said. “We have the right amount of space for what we need.”

Cantler said the Chamber’s building on East Market Street could serve effectively as office space for an organization. The Chamber building has two stories and totals 6,336 square feet.

In January 2020, the Chamber asked Johnson City leaders if they would be interested in purchasing the building, which sits beside City Hall, for $500,000.

The city opted not to purchase it.

Overall, Cantler said, the Chamber is getting ready to begin a new era.

“We’re able to focus on more programming than we have in the past,” Cantler said. “Our new location will be a destination for recruiting and attracting companies and talent to Johnson City. ... I think it’s a unique time for the Chamber to have a greater impact on Johnson City and the surrounding community.”

News
featured
‘We hold these truths to be self-evident …’ is celebrated today
J. Trumbull, W.L. Ormsby

This image shows an 1876 engraving titled "Declaration of Independence, July 4th, 1776" made available by the Library of Congress. On that day, the Continental Congress formally endorsed the Declaration of Independence. Celebrations began within days: parades and public readings, bonfires and candles and the firing of 13 musket rounds, one for each of the original states. Nearly a century passed before the country officially named its founding a holiday.

The Declaration of Independence was adopted by delegates to the Second Continental Congress in Philadelphia on July 4, 1776.

The declaration was written primarily by Thomas Jefferson between June 11 and June 28, 1776, and remains one of this country’s most cherished symbols of freedom.

This document outlines the core principles on which this nation was founded. In it, Jefferson expressed the deeply held convictions in the hearts and minds of the colonists.

Historians say many of the concepts of individual liberty voiced in the Declaration of Independence had already been expressed by John Locke and other influential philosophers of the time.

It was Jefferson, however, who thought to narrow this philosophy down to “self-evident truths,” and thus create a list of grievances against the king that justified the American Revolution.

A transcript of this important American document from the National Archives:

The unanimous Declaration of the thirteen United States of America, When in the Course of human events, it becomes necessary for one people to dissolve the political bands which have connected them with another, and to assume among the powers of the earth, the separate and equal station to which the Laws of Nature and of Nature’s God entitle them, a decent respect to the opinions of mankind requires that they should declare the causes which impel them to the separation. We hold these truths to be self-evident, that all men are created equal, that they are endowed by their Creator with certain unalienable Rights, that among these are Life, Liberty and the pursuit of Happiness.

That to secure these rights, Governments are instituted among Men, deriving their just powers from the consent of the governed — that whenever any Form of Government becomes destructive of these ends, it is the Right of the People to alter or to abolish it, and to institute new Government, laying its foundation on such principles and organizing its powers in such form, as to them shall seem most likely to effect their Safety and Happiness. Prudence, indeed, will dictate that Governments long established should not be changed for light and transient causes; and accordingly all experience hath shewn, that mankind are more disposed to suffer, while evils are sufferable, than to right themselves by abolishing the forms to which they are accustomed. But when a long train of abuses and usurpations, pursuing invariably the same Object evinces a design to reduce them under absolute Despotism, it is their right, it is their duty, to throw off such Government, and to provide new Guards for their future security.

Such has been the patient sufferance of these Colonies; and such is now the necessity which constrains them to alter their former Systems of Government. The history of the present King of Great Britain is a history of repeated injuries and usurpations, all having in direct object the establishment of an absolute Tyranny over these States. To prove this, let facts be submitted to a candid world.