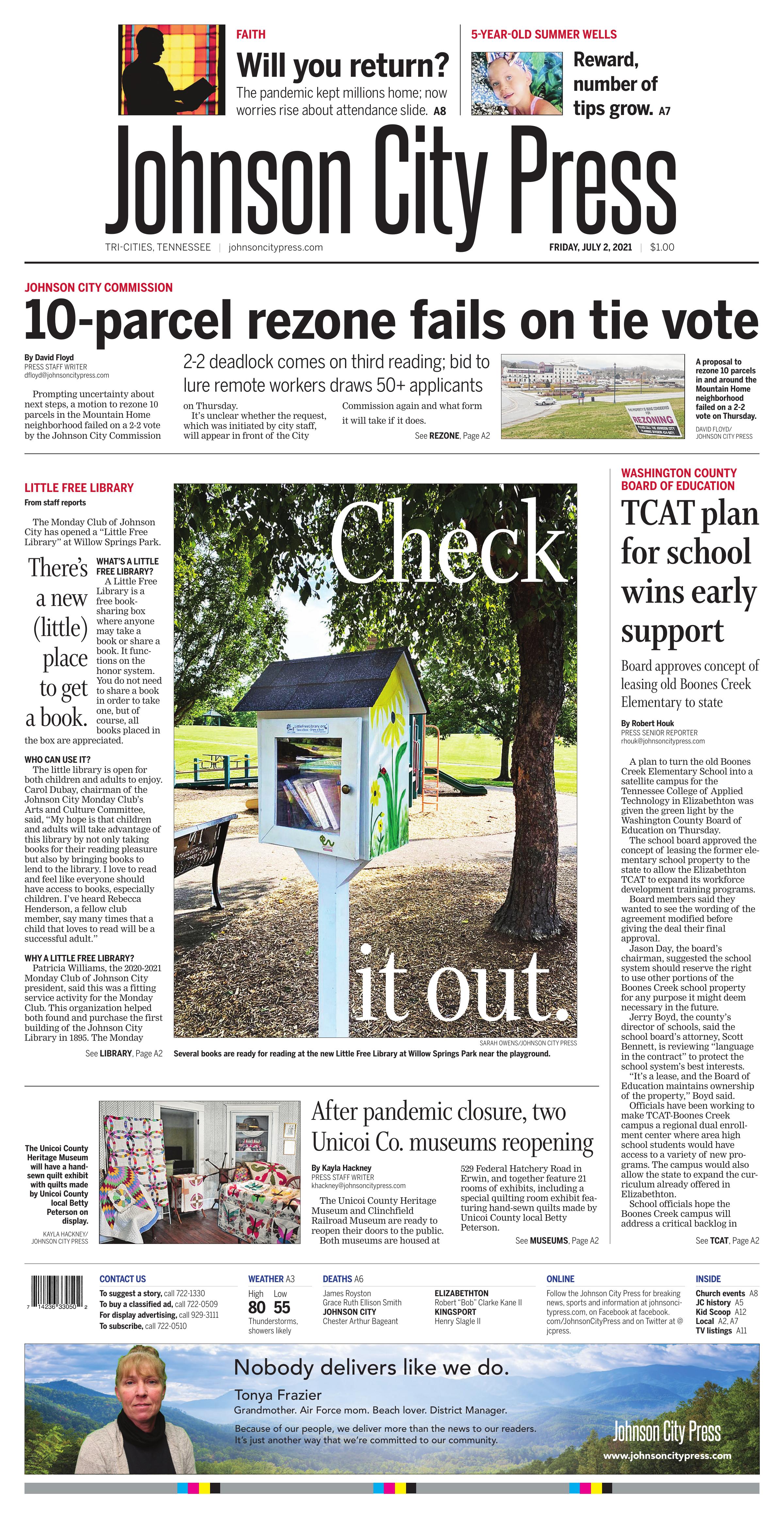 A proposal to rezone 10 parcels in and around the Mountain Home neighborhood failed on a 2-2 vote during a City Commission meeting on July 1.

Prompting uncertainty about next steps, a motion to rezone 10 parcels in the Mountain Home neighborhood failed on a 2-2 vote by the Johnson City Commission on Thursday. 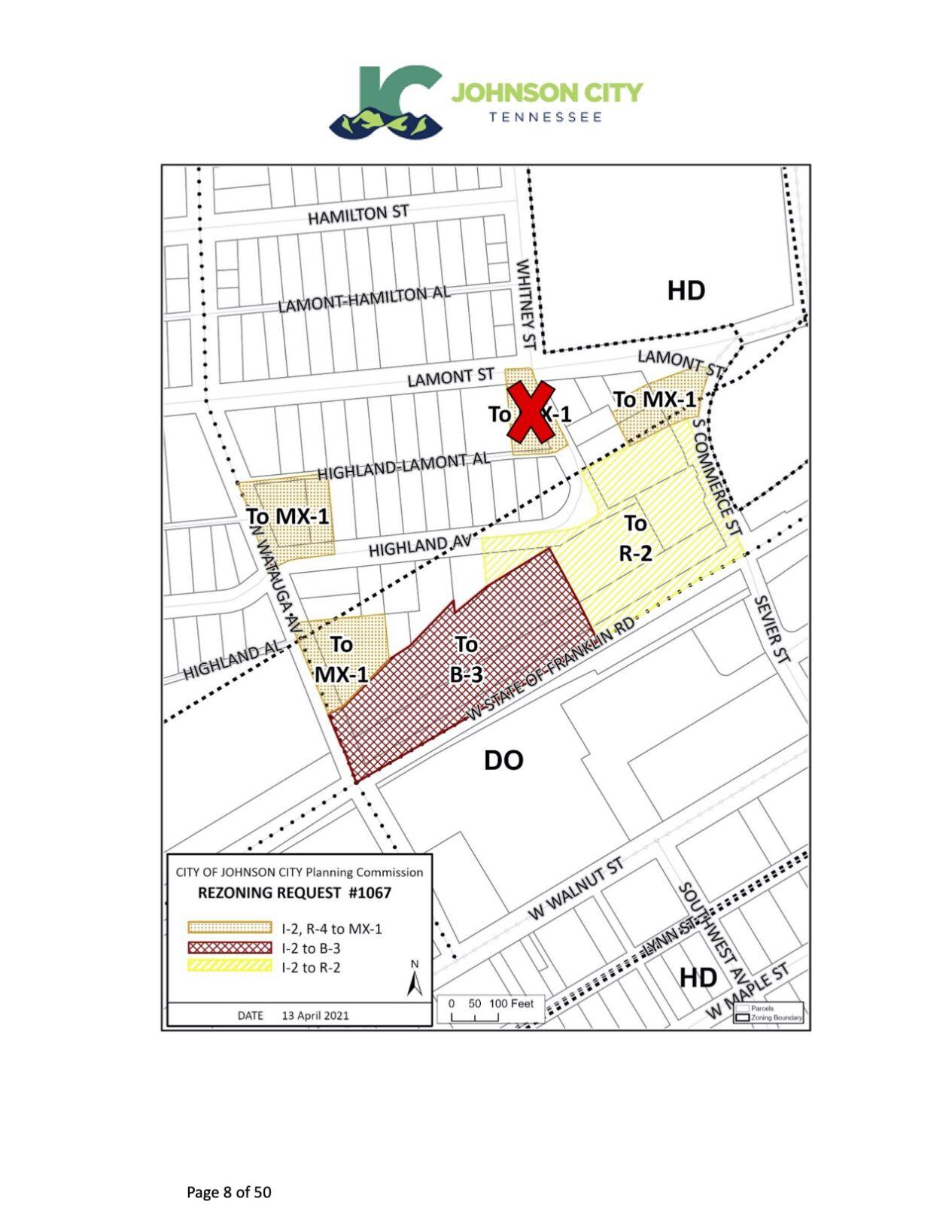 A proposal to rezone 10 parcels in and around the Mountain Home neighborhood failed on a 2-2 vote during a City Commission meeting on July 1. An 11th property, marked with the red X, was removed before the vote on Thursday.

It’s unclear whether the request, which was initiated by city staff, will appear in front of the City Commission again and what form it will take if it does.

The proposal, which has been gradually scaled back since staff brought a larger version to commissioners in January, was intended to eliminate outdated industrial zoning near Founders Park and create the potential for small-scale development and reinvestment on certain properties in the neighborhood.

Commissioners were considering the request on third and final reading.

Commissioner Jenny Brock, who voted against the proposal with Commissioner Aaron Murphy, said she has struggled with the request — in large part because it started out as a bundled proposal that included 20 different properties. 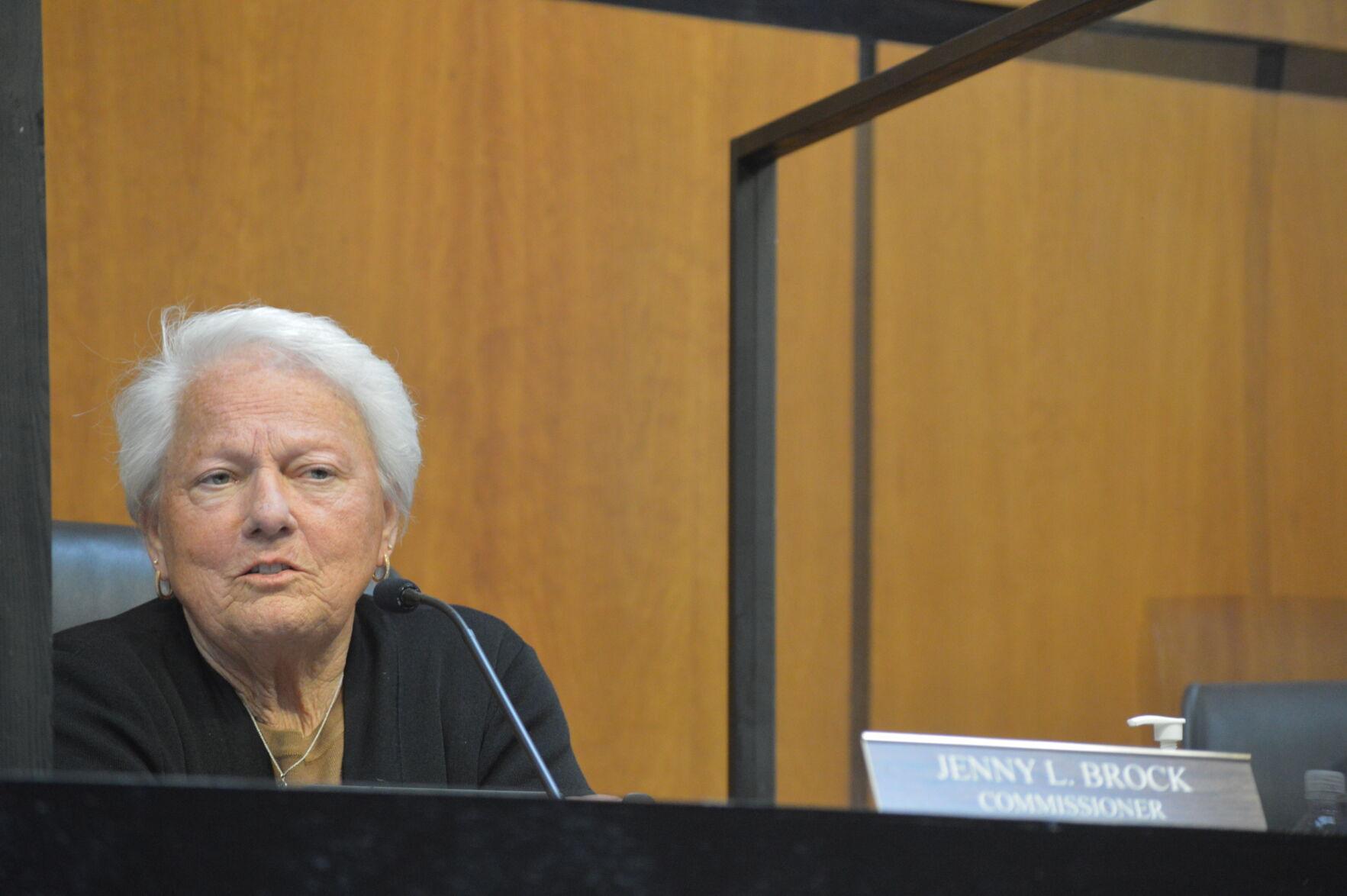 Specifically, Brock had issues with properties situated near homes that would have been rezoned to MX-1. According to the city’s zoning code, general retail and service establishments that do not exceed 2,000 square feet are permitted by right in MX-1 zones.

“Any of us would have asked the same question,” she said. “Do I want a brewery or a coffee shop, that kind of stuff that I’m looking from my porch into that new business? We zone things R-2 residential for a reason. I just have a problem with businesses being so intermingled there.”

She asked staff to bring future rezoning proposals to the commission as individual properties rather than as a bundle. She added that there were properties included in the request, pointing to those near Founders Park, that she was in favor of rezoning.

“Having small pieces of mixed use incorporated on the edges of neighborhoods like this actually promotes a neighborhood and its desirability and walkability,” Hunter said. “These aren’t high-impact.”

The request has garnered opposition from some neighborhood residents, who are concerned the changes would increase traffic, impact pedestrian safety and decrease available parking in the neighborhood. A petition on Change.org in opposition to the proposal had accumulated 73 signatures as of Thursday evening. 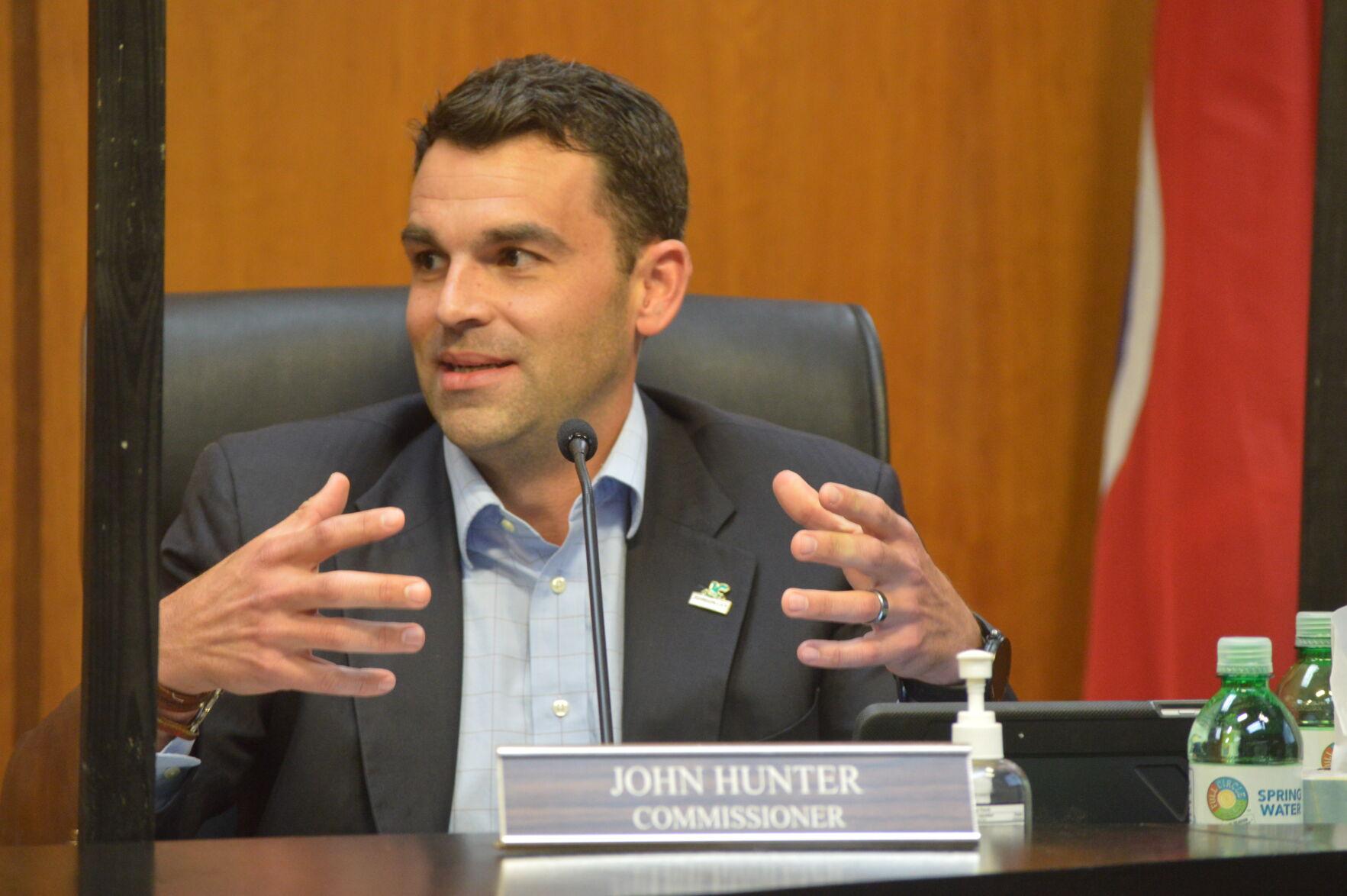 • Johnson City commissioners also heard a quarterly update on a program designed to attract remote workers to the region, which would offer an incentive of up to $5,000 for those who meet income requirements. The city has provided funding for the program.

Alicia Phelps, the executive director of the Northeast Tennessee Tourism Association, said the program has so far received 52 applications as of June 21. Of those applicants, 38 are eligible. A selection committee will narrow that list down.

More than 20 states are represented among the applicants, with most of them coming from the professional services, healthcare or information technology industries. 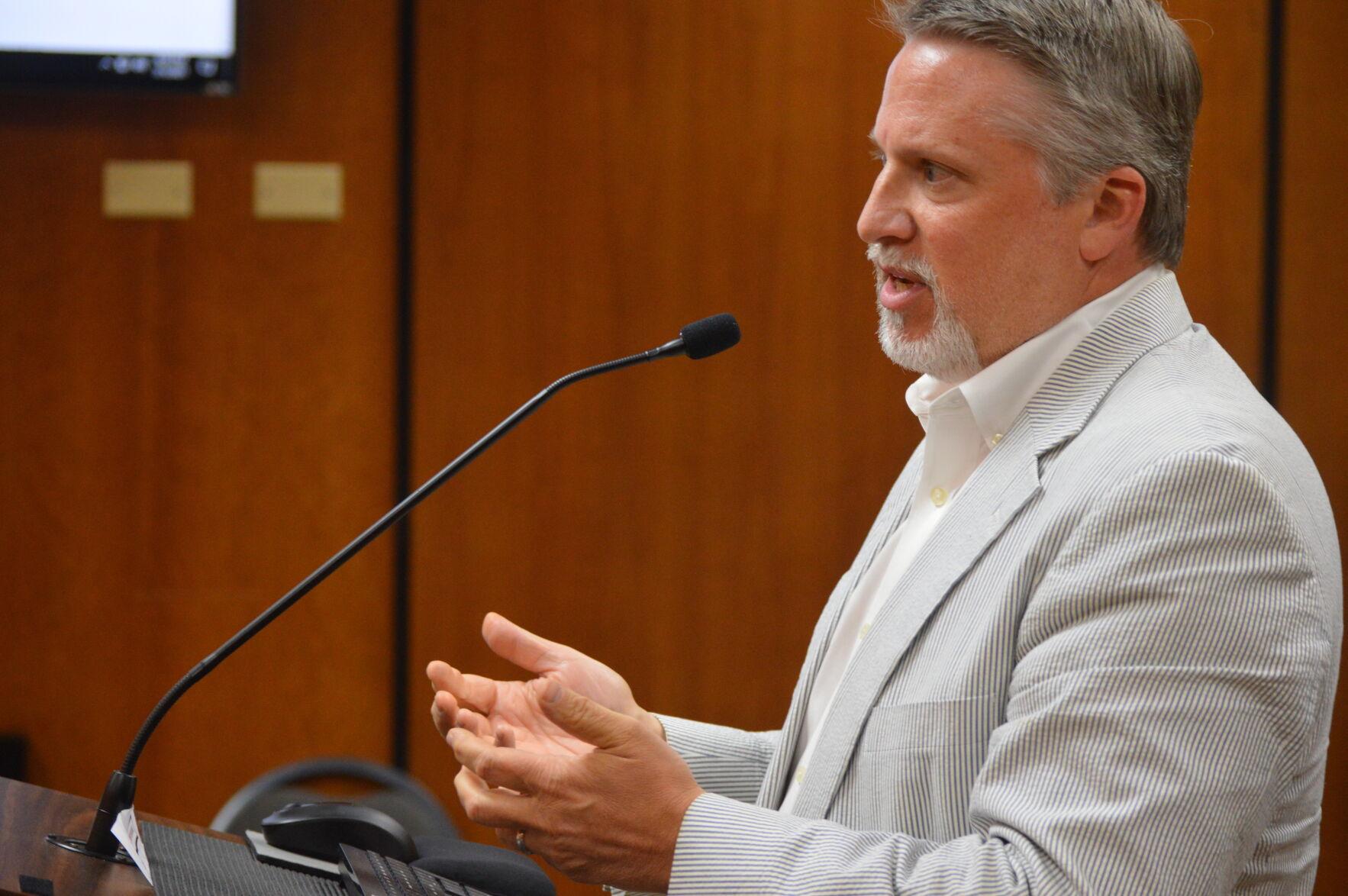 • On first reading, the City Commission also approved changes to the city’s zoning code designed to eliminate requirements for medication assisted treatment facilities that may violate the Americans with Disabilities Act.

Development Services Director Preston Mitchell said the code currently requires these facilities to go through an extra step that isn’t necessary for other conventional medical clinics. In specific zones, he explained, medication assisted treatment facilities have to get a special exception from the Board of Zoning Appeals and meet a specific set of criteria.

“It’s that language, that process, that extra step that’s not required for a conventional medical office that creates the problem,” he said.

The changes remove those extra steps and adopts definitions used by the state.

The museum will have a hand-sewn quilt exhibit with quilts made by Unicoi County local Betty Peterson on display.

The Unicoi County Heritage Museum and Clinchfield Railroad Museum will reopen to the public on Saturday, July 3 from 1-5 p.m.

The Unicoi County Heritage Museum and Clinchfield Railroad Museum are ready to reopen their doors to the public.

Both museums are housed at 529 Federal Hatchery Road in Erwin, and together feature 21 rooms of exhibits, including a special quilting room exhibit featuring hand-sewn quilts made by Unicoi County local Betty Peterson.

Peterson, originally from North Carolina, learned to hand-sew quilts from her mother when she was 8 years old and has been carrying on the family tradition ever since.

“I seldom see hand-pieced quilts,” said Erwin. “Today’s quilts are no longer hand-made with a needle, thread and thimble, but only by automatic sewing machine.”

Besides the quilting exhibit, the museum also has a Blue Ridge Pottery exhibit, a history and war exhibit with an expanded World War II display, a country store exhibit, a large collection of Clinchfield Railroad artifacts and more. The museum will also have books, including some on the history of Unicoi County, for sale in the museum.

This year will mark the Unicoi County Heritage Museum’s 39th year in operation and the Clinchfield Railroad Museum’s 10th year.

Erwin said she was “thrilled to death” about the reopening.

Last year the museums were closed because of the COVID-19 pandemic, which Erwin said caused some budgetary issues. “I’m glad to be back where we can operate and have the resources to do the things that need to be done,” Erwin said.

A plan to turn the old Boones Creek Elementary School into a satellite campus for the Tennessee College of Applied Technology in Elizabethton was given the green light by the Washington County Board of Education on Thursday.

The school board approved the concept of leasing the former elementary school property to the state to allow the Elizabethton TCAT to expand its workforce development training programs.

Board members said they wanted to see the wording of the agreement modified before giving the deal their final approval.

Jason Day, the board’s chairman, suggested the school system should reserve the right to use other portions of the Boones Creek school property for any purpose it might deem necessary in the future.

“It’s a lease, and the Board of Education maintains ownership of the property,” Boyd said.

Officials have been working to make TCAT-Boones Creek campus a regional dual enrollment center where area high school students would have access to a variety of new programs. The campus would also allow the state to expand the curriculum already offered in Elizabethton.

During a workshop last month, Board of Education members heard from officials with the TCAT facility in Elizabethton, who told them the Boones Creek campus would operate on the technical middle college concept.

This would allow students to earn their required high school credits during their freshman and sophomore years. Next, they would attend the technical middle college program in their junior and senior years to obtain a post certification.

TCAT officials say a waiver would be requested to reduce the number of high school credits required of students participating in the technical middle college program.