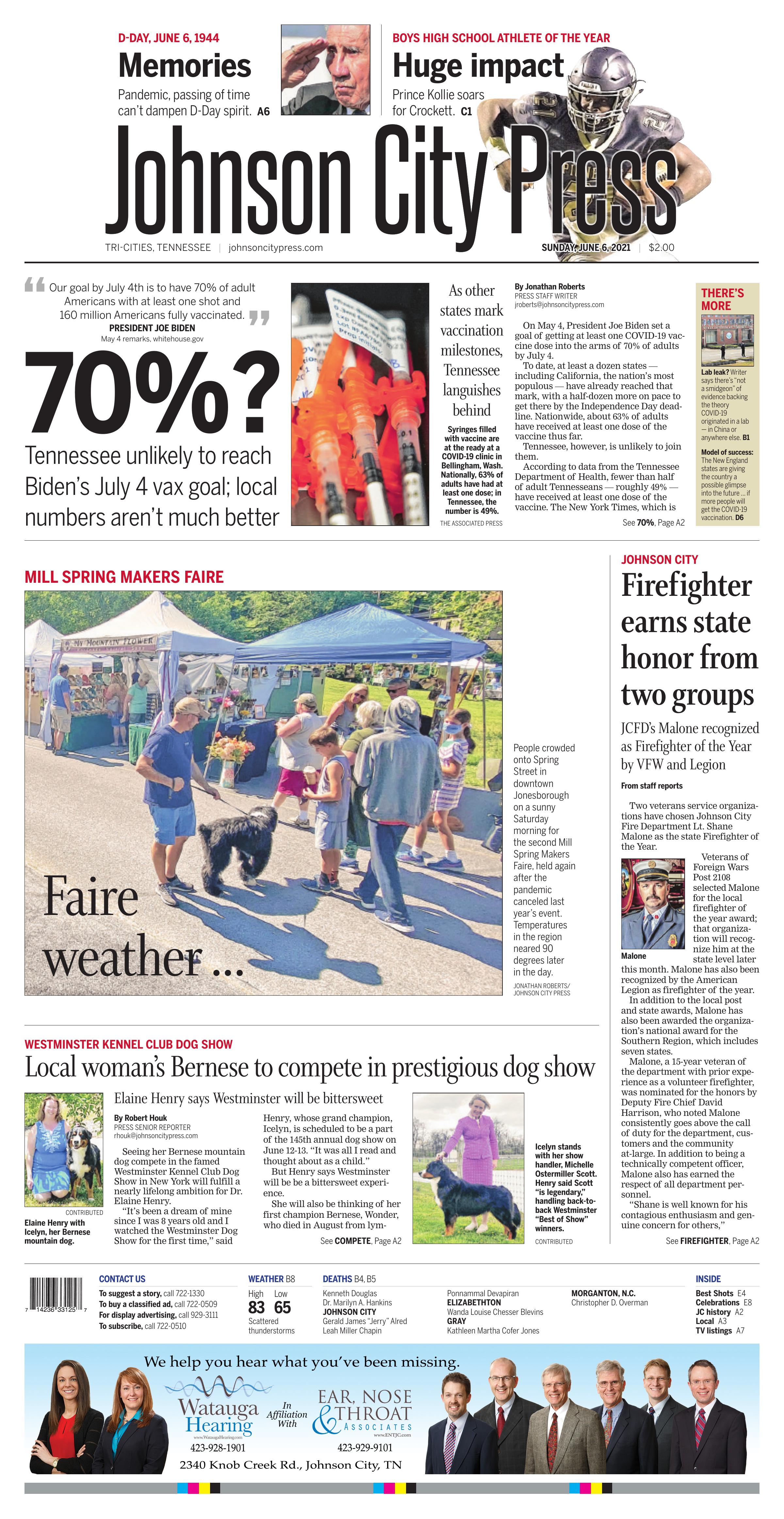 A judge with Icelyn and handler Michelle Scott at a dog show in January.

Elaine Henry, right, with her Bernese show dogs Icelyn and Wonder and her friend Pat Duryea.

“It’s been a dream of mine since I was 8 years old and I watched the Westminster Dog Show for the first time,” said Henry, whose grand champion, Icelyn, is scheduled to be a part of the 145th annual dog show on June 12-13. “It was all I read and thought about as a child.”

But Henry says Westminster will be be a bittersweet experience.

She will also be thinking of her first champion Bernese, Wonder, who died in August from lymphoma.

Henry said Icelyn, who is Wonder’s grand niece, has helped her recover from her grief.

“Wonder was my once-in-a-lifetime girl and Icelyn adored her,” Henry said last week. “After her death, I thought the one thing I could do to honor her memory is getting Icelyn into Westminster.”

Bernese mountain dogs are a Swiss working breed, bred to pull carts in the mountainous regions of Switzerland.

Henry said Icelyn came into her life as a “cute but awkward 8-week-old puppy” with a lot of personality. She recalls thinking at the time that Icelyn was “not super outstanding” as a show dog.

“From day one, she was insanely happy,” Henry said of Icelyn.

“I can’t explain it, but I remember a feeling came over me that her great aunt knew Icelyn’s time had come,” she said.

That time did indeed come for Icelyn, who finished her championship late last year with three majors. Icelyn earned her Grand Championship in January in Brooksville, Florida, where she twice defeated the reigning Westminster “Best Of Breed.”

Henry said she is hopeful Icelyn will do well at Westminster, but fears the current condition of her dog’s coat could negatively impact her chances of placing in the show.

“Unfortunately, Bernese shed their coats twice a year,” she said, noting that Icelyn’s fur is not exactly in championship shape. “It may affect her chances of winning a ribbon.”

Even so, Henry believes competing in the Westminster show will be valuable experience for Icelyn. Henry is also confident her dog will do well at the event with the help of her handler, Michelle Ostermiller Scott.

She said Scott grew up showing Bernese mountain dogs, and has made her name in the profession by handling back-to-back Westminster “Best of Show” winners.

“She is legendary,” Henry said. “Michelle just completes the package. She is known as a dog whisperer.”

Plans For The Future

After competing in the Westminster show, Henry said plans are to breed Icelyn with another champion.

“I’m really excited,” she said. “This will be our first litter.”

“Icelyn has been a gift from God,” she said. “She has helped me get over losing Wonder.”

Henry is a psychologist who divides her time between Johnson City, where Icelyn is officially registered, and Maryville, where she taught and conducted research at Maryville College before the COVID-19 pandemic.

Part of Henry’s research while working on her doctorate at the University of Tennessee-Knoxville was studying how stress can impact learning a second language.

She said Wonder, who was also a certified therapy dog, played a key role in that research.

These days, Henry said she is concentrating most of her time on dog shows. Henry said that has been her real passion since childhood, when she hoped to become an accomplished show dog handler.

“My heart is with dogs,” she said.

A National Guard member readies a dose of the Pfizer-BioNTech COVID-19 vaccine ahead of a vaccination event at the Washington County Health Department on Friday, May 14, 2021.

On May 4, President Joe Biden set a goal of getting at least one COVID-19 vaccine dose into the arms of 70% of adults by July 4.

To date, at least a dozen states — including California, the nation’s most populous — have already reached that mark, with a half-dozen more on pace to get there by the Independence Day deadline. Nationwide, about 63% of adults have received at least one dose of the vaccine thus far.

Tennessee, however, is unlikely to join them.

According to data from the Tennessee Department of Health, fewer than half of adult Tennesseans — roughly 49% — have received at least one dose of the vaccine. The New York Times, which is tracking states’ vaccination progress, estimates it would take Tennessee at least six months at its current vaccination rate to vaccinate 70% of the adult population.

In Northeast Tennessee, the numbers aren’t much better.

In total, about 38% of Northeast Tennessee’s population has received at least one shot, and about a third are fully immune.

“I think, based on the numbers to date, it doesn’t seem likely that we’ll hit 70% by July 4,” said Dr. Randy Wykoff, dean of East Tennessee State University’s College of Public Health. “Now, that could change, public opinion changes, information changes — if anything I think we’re seeing more people who are taking the pandemic a little less seriously, not more seriously.”

Due to natural immunity from past infection, however, Wykoff estimates somewhere between 42% to 72% of the region could have some form of immunity from both the vaccines and previous infection.

“I think from vaccination alone, it doesn’t look like we’re going to hit that 70% mark in the next month, but if you assume there’s some element of immunity from natural infection, we could be getting close to 70% — we could, theoretically, be there already but I suspect we’re moving in that direction,” Wykoff said, noting that there are still questions surrounding how much immunity those who had mild or asymptomatic infections have, or how long that immunity lasts.

In Sullivan County, the Sullivan County Regional Health Department has shifted from administering vaccines at mass vaccination sites to a more targeted strike team approach to get vaccines into parts of the community that need it most, such as group living settings, schools and the homeless. Department Medical Director Dr. Stephen May said they’re making a push to get those 12 and up vaccinated, but said he feels it’s going to be a “real challenge” to vaccinate 70% of the county’s adults by July 4.

“The problem is not with vaccine supply or vaccine delivery,” he said; “The real issue, I think, is complacency.”

May urged people to get vaccinated, noting that people in Northeast Tennessee are still being hospitalized and dying as a result of the disease. Last month, Northeast Tennessee’s eight counties reported 33 virus-related deaths (up from 20 in April) and 75 hospitalizations (down from 88 in April).

Dr. Amit Vashist, Ballad Health’s chief clinical officer, said the key to increasing the region’s vaccination rate is making it as easy as possible for people to get the vaccine, without interrupting their daily routine too much.

Vashist also said he was “cautiously optimistic” that the U.S. Centers for Disease Control and Prevention’s guidelines for vaccinated individuals, allowing them to ditch their masks in virtually all settings, as well as more robust data on the safety and efficacy of the shots would boost vaccine turnout.

“There is a segment of the society that is outrightly hesitant, but I think the large part of the population lies somewhere in the middle, that they’re not as hesitant to take the vaccine, but there are issues around it being available and it being accessible at convenient hours at places that are convenient,” Vashist said. He noted that’s what has spurred Ballad to both do events themselves and collaborate with community partners to distribute the vaccine.

“That is absolutely the key going forward,” said Vashist.

Both May and Wykoff said if the region remains largely unvaccinated in the months leading up to the cooler months, when more and more people gather inside, it could leave the region susceptible to another spike in cases, particularly with more transmissible variant strains of the virus currently circulating in the area.

“We hope that it’s coming down because of vaccination and natural acquired immunity, but we don’t know for a fact that it’s not going to come back up again,” Wykoff cautioned.

In addition to the local post and state awards, Malone has also been awarded the organization’s national award for the Southern Region, which includes seven states.

Malone, a 15-year veteran of the department with prior experience as a volunteer firefighter, was nominated for the honors by Deputy Fire Chief David Harrison, who noted Malone consistently goes above the call of duty for the department, customers and the community at-large. In addition to being a technically competent officer, Malone also has earned the respect of all department personnel.

“Shane is well known for his contagious enthusiasm and genuine concern for others,” Harrison said. “In my tenure here, I have witnessed countless examples of his selfless nature and his earnest desire to encourage others as a coach, mentor, and confidant.”

In addition to his regular duties, Malone is also in charge of the Johnson City Fire Department Honor Guard, which performs duties for fallen veterans of the department as well as other regional departments. In the past year the Honor Guard has participated in more than 100 activities, each one requiring many hours of coordination and effort.

“Shane is truly deserving of this recognition,” said Interim Fire Chief David Bell. “His contributions to our community have played a significant role in supporting our extraordinary team of firefighters who provide excellent service to residents and visitors of Johnson City.”

Malone was scheduled to receive the American Legion Firefighter of the Year Award Saturday at the American Legion Commander and President’s Awards Banquet in Franklin, Tennessee. He will receive the Veterans of Foreign Wars 2021 Firefighter of the Year Award Friday, June 18, at the Department of Tennessee Veterans of Foreign Wars State Convention in Nashville.