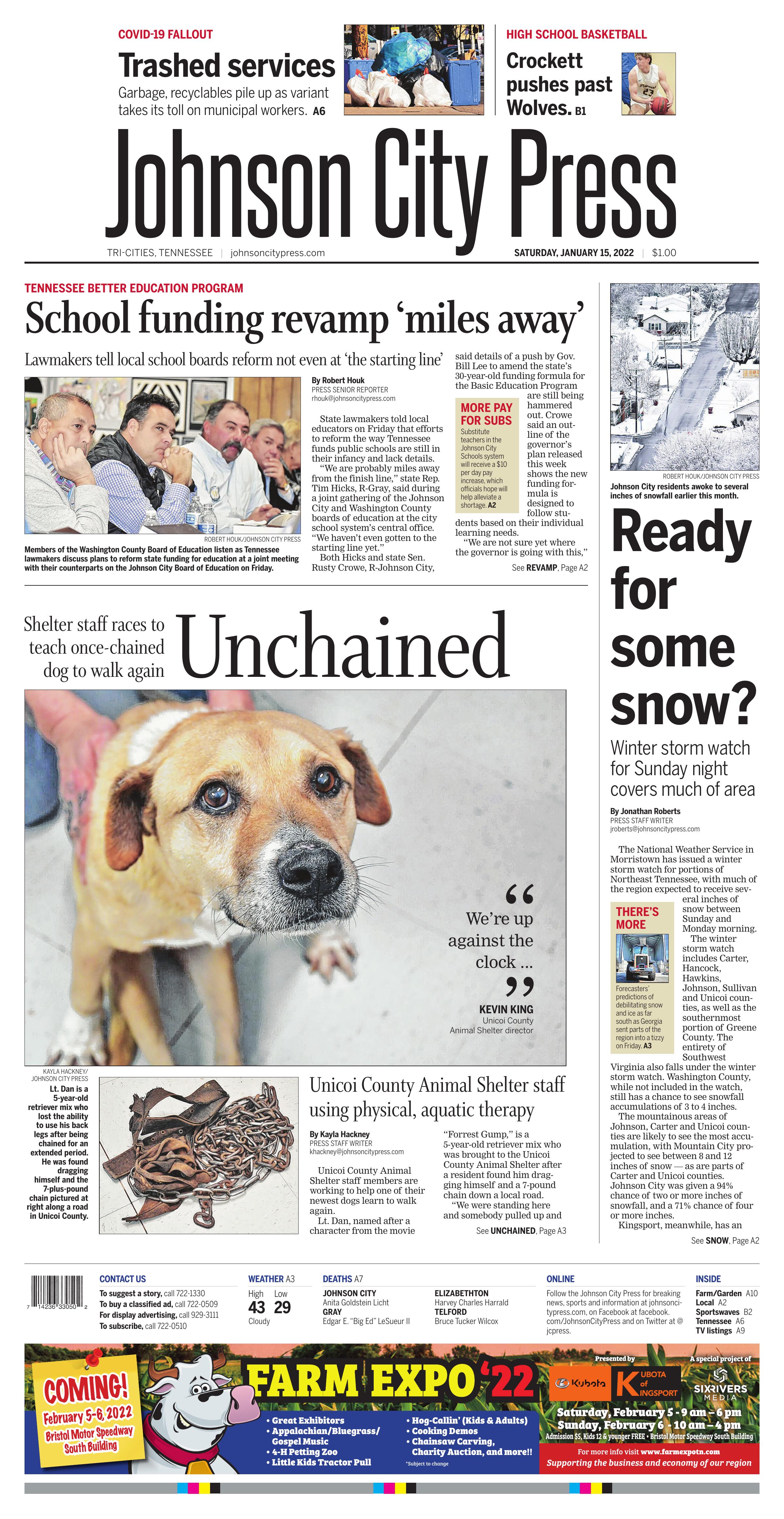 State lawmakers told local educators on Friday that efforts to reform the way Tennessee funds public schools are still in their infancy and lack details.

“We are probably miles away from the finish line,” state Rep. Tim Hicks, R-Gray, said during a joint gathering of the Johnson City and Washington County boards of education at the city school system’s central office. “We haven’t even gotten to the starting line yet.”

Both Hicks and state Sen. Rusty Crowe, R-Johnson City, said details of a push by Gov. Bill Lee to amend the state’s 30-year-old funding formula for the Basic Education Program are still being hammered out. Crowe said an outline of the governor’s plan released this week shows the new funding formula is designed to follow students based on their individual learning needs.

“We are not sure yet where the governor is going with this,” said Crowe, who is a member of the state Senate’s Education Committee. “The latest thing I heard is the dollars will follow the child, but we aren’t talking about vouchers.”

Crowe said the governor has promised to better Tennessee’s ranking for school funding per pupil, which now stands at 44th in the nation. Even so, county school board member Keith Ervin noted the governor has not indicated how much that ranking will be improved with the new BEP formula.

Johnson City Schools Superintendent Steve Barnett said there is a “degree of anxiety” among more affluent school systems, who fear they could lose money under a new formula. Currently, school systems receive state education funds based on their local governments’ ability to pay for those school programs.

Barnett said a change in the BEP formula could also alter how much schools put into that “maintenance of effort.” Kathy Hall, chair of the city’s Board of Education, said it’s important that state funding does not impact that local match over time.

Hall also noted that maintenance of effort will be important if the state makes good on its goals to expand pre-kindergarten programs and lower classroom sizes.

“Both means we will need more local classrooms and more school buildings,” she said.

Jerry Boyd, Washington County’s director of schools, said it was important that state officials think of equity and fairness when determining how state education funds will be distributed to school districts statewide.

“We need to pay attention to that pool of money to see that it grows and that there are no winners and losers,” Boyd said.

Michelle Treece, a member of the Johnson City Board of Education, also told state legislators she found the lack of details on the new BEP formula to be “very discouraging.”

Treece said she hoped local lawmakers will be more responsive to her questions about the funding formula than they were when she expressed concerns about legislation the state General Assembly passed last year banning “critical race theory” instruction in Tennessee.

“I’d like a reply,” Treece said, referring to her calls and emails.

Hicks said details of the new school funding formula will be hashed out as he and his colleagues hold committee hearings during the legislative session.

“I’m excited to be a part of tackling the BEP funding issue,” he said. “I believe we have a great opportunity on the horizon.”

Lieutenant Dan is a 5 year old retriever mix who lost his ability to use his back legs after being chained for an extended period of time.

A citizen found Lt. Dan dragging himself, along with this 7 pound chain, along a road in Unicoi County.

Unicoi County Animal Shelter staff are doing physical and aquatic therapy to help Lt. Dan regain usage of his back legs after he suffered spinal damage from being chained.

Unicoi County Animal Shelter staff members are working to help one of their newest dogs learn to walk again.

Lt. Dan, named after a character from the movie “Forrest Gump,” is a 5-year-old retriever mix who was brought to the Unicoi County Animal Shelter after a resident found him dragging himself and a 7-pound chain down a local road.

“We were standing here and somebody pulled up and said they saw a dog dragging himself, like his legs and the chain, down the road and they grabbed him,” said Kevin King, the director of the Unicoi County Animal Shelter. “And then when I walked outside, that’s when I saw him lying there.”

After having Lt. Dan examined by a veterinarian, King discovered the dog is suffering from heartworm disease and at least three of his lumbar vertebrae are severely damaged, which prevents him from using his back legs. The lumbar damage happened after Lt. Dan was kept on the heavy chain for an extended period of time.

They believe that at one point he lived a normal life as someone’s pet.

“He’s actually neutered and housebroken,” said King. “So, this person, and we don’t know who it is, either got him from somebody or they gave him away and this is what they did to him.”

While Lt. Dan was scared the first time he was put in the water, King said that the dog has enjoyed every session since.

“It’s a matter of trying to get the nerves to fire off and try to teach him to use those muscles again, and we’re up against the clock because once he starts heartworm treatment we can’t exercise him real hard,” said King. “So if we can’t teach him to walk before then he’ll never use his legs again.”

King said he is hopeful that Lt. Dan can regain use of his back legs, though King doesn’t think he’ll ever walk normally or be able to run again. And while helping Lt. Dan recover is the shelter’s main mission, the UCAS hopes his story will encourage others to reach out to their elected officials about anti-chaining laws.

“Right now it’s completely legal,” said King. “If we wanted to chain him up like that, we’re allowed to do it. We’ll toss some Gravy Train on the ground. (The law) just says food, water, shelter, care.”

In Tennessee, it is only illegal to tether or chain a dog outside when the owner knowingly does it in a way that will injure the dog. There are no laws at the state level that prevent dogs from being chained up outside for an extended period of time, but some municipalities, such as Johnson City, have passed ordinances against it.

The cost of Lt. Dan’s medical care is currently covered through donations the shelter received after a social media fundraiser, but King said people can still help Lt. Dan and other animals in the shelter by donating old comforters, sheets and cat litter.

“We have all the initial stuff covered for Dan, but if he ends up needing any extra care there will be more fundraisers online,” said King. “But people are more than welcome to follow the story or call and ask how he is, because it’s a long, long process of getting him better.”

The National Weather Service in Morristown has issued a winter storm watch for portions of Northeast Tennessee, with much of the region expected to receive several inches of snow between Sunday and Monday morning.

The winter storm watch includes Carter, Hancock, Hawkins, Johnson, Sullivan and Unicoi counties, as well as the southernmost portion of Greene County. The entirety of Southwest Virginia also falls under the winter storm watch. Washington County, while not included in the watch, still has a chance to see snowfall accumulations of 3 to 4 inches.

Kingsport, meanwhile, has an 88% chance of two or more inches of snow, and a 55% chance of four or more.

NWS Morristown Meteorologist Brandon Wasilewski said the lower elevations, including Johnson City, could see a bit of snow in the morning that is likely to transition into a period of rain/sleet turning into snow around sundown on Sunday.

Wasilewski said the city’s snowfall totals could be impacted by the rain, and said downslope winds coming off the mountains could lead to dryer conditions and temperatures warming in the valley areas — cutting down on the amount of snowfall. Wasilewski said this storm system is expected to be stronger and impact a bit further south than the storm that moved through the area last Thursday and left much of Washington County with only a dusting of snow.

“I think with this one we’re looking at, potentially, better moisture on the backside and maybe some better upward motion,” said Wasilewski. “That does give us confidence that maybe there’s ... potential for higher totals but, yeah, there are still some concerns (that totals will be low).”

Wasilewski said people should try to avoid travel during the storm, if possible, and urged people to stay up-to-date with the forecast in their area.