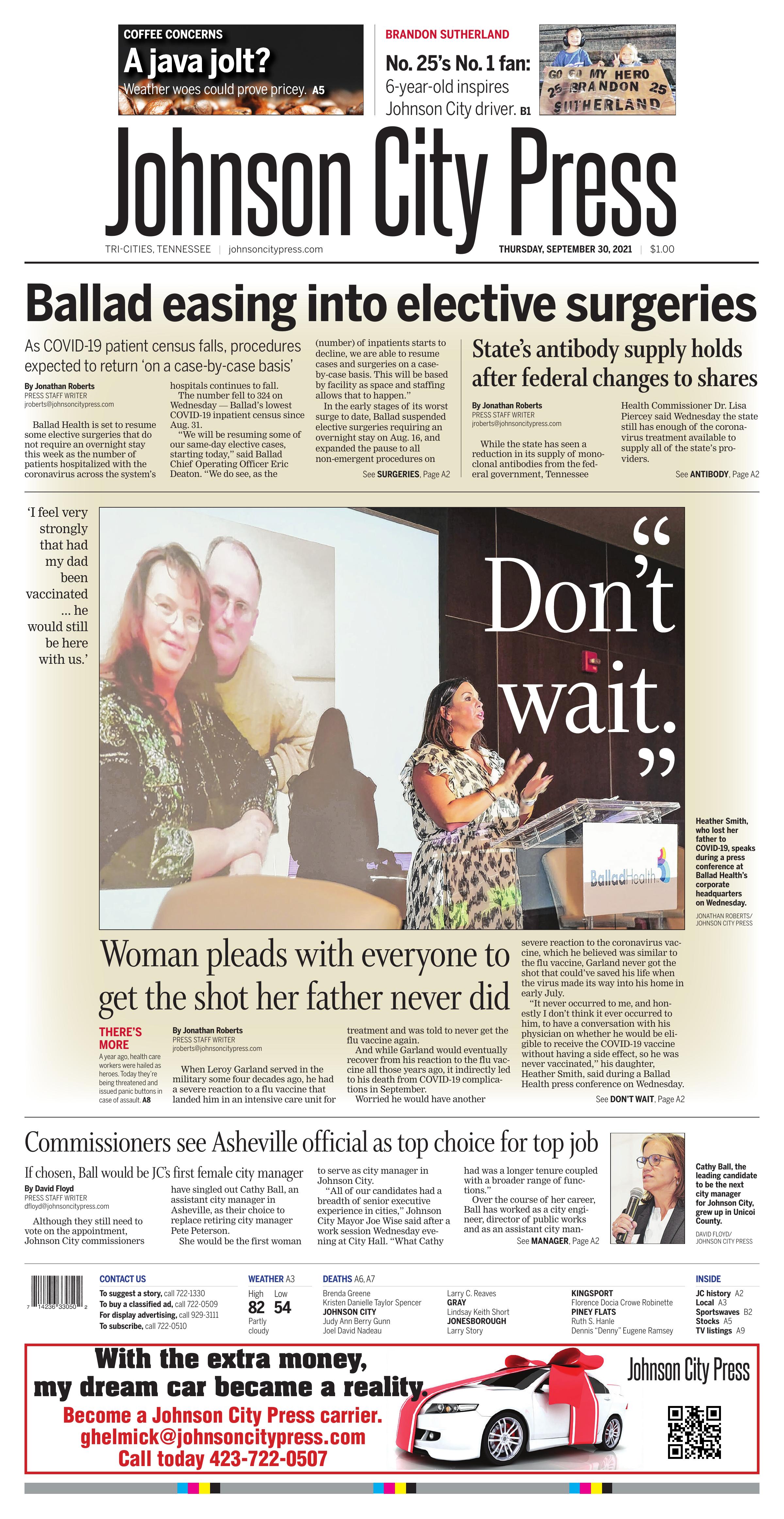 Heather Smith, who lost her father to COVID-19, speaks during a press conference at Ballad Health's corporate headquarters on Wednesday, Sept. 29.

Heather Smith, who lost her father to COVID-19, speaks during a press conference at Ballad Health's corporate headquarters on Wednesday, Sept. 29.

When Leroy Garland served in the military some four decades ago, he had a severe reaction to a flu vaccine that landed him in an intensive care unit for treatment and was told to never get the flu vaccine again.

And while Garland would eventually recover from his reaction to the flu vaccine all those years ago, it indirectly led to his death from COVID-19 complications in September.

Worried he would have another severe reaction to the coronavirus vaccine, which he believed was similar to the flu vaccine, Garland never got the shot that could’ve saved his life when the virus made its way into his home in early July.

“It never occurred to me, and honestly I don’t think it ever occurred to him, to have a conversation with his physician on whether he would be eligible to receive the COVID-19 vaccine without having a side effect, so he was never vaccinated,” his daughter, Heather Smith, said during a Ballad Health press conference on Wednesday.

It started when Garland’s wife, 63, was exposed to the virus at her workplace the week of July 9. As the virus does, it spread from her to Garland, 61, as well as Smith’s 94-year-old grandmother and her 24-year-old brother. Days before her exposure, Garland’s wife received her first dose of the vaccine, while her grandmother had been fully vaccinated. Her brother and father, however, were not.

Before long, Garland was hospitalized with pneumonia, which quickly progressed to acute respiratory distress, an often fatal complication where fluid builds up in the tiny air sacs in your lungs. He would not recover.

Smith said it is a horrible thing to watch somebody you love die of COVID-19 and said “I feel very strongly that had my dad been vaccinated that he would still be here with us.”

On his deathbed, Garland grabbed his son by the collar and said “get the shot.”

“That has just left a permanent imprint on my heart and mind,” Smith said, her voice beginning to crack.

Smith urged people to get vaccinated, noting that her father had no co-morbidities and “had a lot of life left” when the virus killed him on Sept. 6.

Even in his obituary, written by Smith, the family asked that people get vaccinated in lieu of flowers.

“We believe so much in the efficacy and safety and importance of the COVID-19 vaccine,” Smith said as she tried to compose herself. “So, if you are on the fence, if you feel you have a reasonable reason (to not get vaccinated), if you have questions, I beg you to please talk to your trusted physician, nurse practitioner or physician’s assistant to find out if you’re eligible for the COVID-19 vaccine, and if you are, don’t wait.

“They are readily available, they are free, you can go today,” she continued. “I do not want COVID-19 to be a thief to you and your family and your family’s lives.”

Although they still need to vote on the appointment, Johnson City commissioners have singled out Cathy Ball, an assistant city manager in Asheville, as their choice to replace retiring city manager Pete Peterson.

She would be the first woman to serve as city manager in Johnson City.

“All of our candidates had a breadth of senior executive experience in cities,” Johnson City Mayor Joe Wise said after a work session Wednesday evening at City Hall. “What Cathy had was a longer tenure coupled with a broader range of functions.”

Over the course of her career, Ball has worked as a city engineer, director of public works and as an assistant city manager.

After a long search process and two days packed with interviews, commissioners agreed Wednesday that Ball was their top pick. They will meet at 7:15 a.m. Thursday at City Hall to cast their formal vote.

In March, Peterson announced plans to retire at the end of 2021. He has served as city manager for 16 of his roughly 30 years with the city.

In May, the commission voted to hire the search firm Strategic Government Resources to launch a national hunt for Peterson’s replacement.

Commissioner Jenny Brock said Wednesday that Ball’s experience as a civil engineer would be an asset.

The city is now launching a $33 million overhaul of the West Walnut Street corridor, which leaders expect will spur commercial growth along the road and strengthen the connection between East Tennessee State University and downtown.

“Particularly I think that with that background with the projects we have in front of us she’ll be able to gain a lot of respect from our departments who will be working in that area,” Brock said. “(She) knows how to talk the language and the lingo, but I’m certainly impressed with her leadership and her caring and enthusiasm.”

“I believe she has the experience to help move us along with some community issues that we’re having in various ways,” Murphy said.

“I would say Chris if he were a little older and a little more experienced because I think he is (going to be) a superstar in the future,” said Vice Mayor Todd Fowler.

Ball was also a favorite among members of the public. Survey responses gathered from attendees at a meet and greet Tuesday at the Langston Centre largely identified her as the best choice, pointing to her qualifications and her roots in the community. Responses also singled out Hannah-Spurlock and Lindsey.

Ball grew up in Unicoi County, went to Tennessee Tech University and started her first job in Johnson City with an engineering consulting firm. She worked for the city of Greenville, South Carolina, for nine years before moving to Asheville, where she has served for 24 years.

“I have family in the area and I’ve been able to visit on a regular basis and I see how Johnson City has grown so much,” she said during the event Tuesday at the Langston Centre.

While the state has seen a reduction in its supply of monoclonal antibodies from the federal government, Tennessee Health Commissioner Dr. Lisa Piercey said Wednesday the state still has enough of the coronavirus treatment available to supply all of the state’s providers.

Piercey said there were two key reasons for this: a decline in demand statewide as new infections fall, as well as higher-than-anticipated supply from the federal government. In the first two weeks since the federal government took control of the allocation process, sparking fears of a shortage in the treatment, the state received more doses than expected, which coincided with a drop in demand as new COVID-19 infections decline.

“This allocation process changed right around the same time we were topping over the peak,” Piercey said. “So, the factors lined up in our favor thankfully.”

Ballad's monoclonal antibody treatment process 'will not change at this time'

Ballad Health's process for people seeking monoclonal antibody treatment “will not change at this time” after health officials recommended limiting the treatment to those who haven't been fully vaccinated or vaccinated immunocompromised people.

Earlier this month, the Tennessee Department of Health recommended providers follow guidance from the National Institutes of Health’s COVID-19 Treatment Guidelines in the event of a major disruption in supply.

According to those guidelines, usage of the treatment should be limited to those who have not yet been fully vaccinated and are at high risk for severe illness, as well as those who are vaccinated and immunocompromised.

The recommendation came after the federal government announced it would begin limiting supplies of the treatment due to seven hard-hit southern states, including Tennessee, receiving 70% of the nation’s shipments of monoclonal antibodies.

There has not been a need to limit who receives the treatment beyond prohibiting the use of the treatment for post-exposure prophylaxis — or giving it to those who have been exposed but haven’t tested positive.

Piercey said that, while supply dropped from around 7,600 doses over the past two weeks to 6,300 this week, “we were able to supply all 220 providers, and actually had a few doses left over that we sent out to some of our higher volume providers to give them a little cushion.”

“I am optimistic that supply is going to hold and that we’re not going to have to do any other prioritization for the foreseeable future,” Piercey said.

Ballad Health officials said their supply is also holding steady, and that they are “very assertive in making sure we are able to get that out there” and will continue working with state officials in Tennessee and Virginia to ensure they have adequate supply.