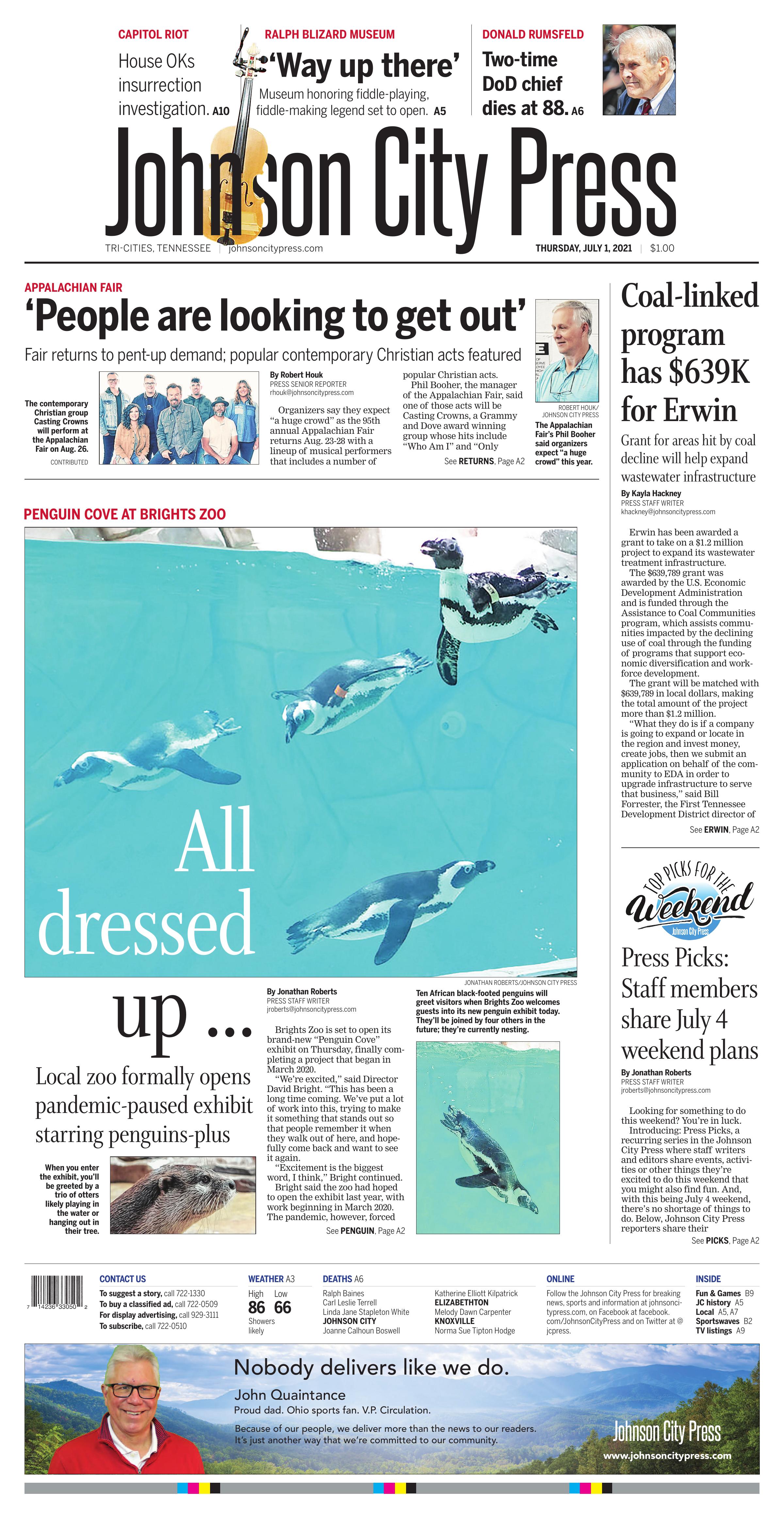 Appy the Duck and Phil Booher, the manager of the Appalachian Fair, at a press conference Wednesday at the fairgrounds in Gray to  announce musical acts coming to the fair in August.

The contemporary Christian group Casting Crowns will perform at the Appalachian Fair on Aug. 26.

Organizers say they expect “a huge crowd” as the 95th annual Appalachian Fair returns Aug. 23-28 with a lineup of musical performers that includes a number of popular Christian acts.

Phil Booher, the manager of the Appalachian Fair, said one of those acts will be Casting Crowns, a Grammy and Dove award winning group whose hits include “Who Am I” and “Only Jesus.” Casting Crowns will perform Aug. 26 at 8 p.m. on the Main Stage.

“We’re doing something a little different this year with featuring two contemporary Christian acts,” Booher said at a news conference Wednesday at the Appalachian Fairground in Gray to announce the lineup at this year’s fair. “We try to look at who is up and coming. We ask what people want to see and who we can afford.”

The theme of this year’s Appalachian Fair is “Farm Days & Family Ways.”

Fair officials canceled the 94th annual event last year because of concerns over the COVID-19 pandemic. Aside from missing a few years during World War II, the fair has been an annual tradition at the fairgrounds in Gray since 1926.

The James H. Drew Exposition returns to the midway this year with its rides and games. Booher said Drew will offer ride specials daily, including $15 unlimited rides on Aug. 24.

Based on his conversations with officials of the Drew Exposition, which Booher said has been working fairs and festivals across the country since March, he believes the Appalachian Fair could see a record turnout this year.

“People are looking to get out,” he said.

The Appalachian Fair kicks off its entertainment this year on Aug. 23 with a return of the Army’s Golden Knights Parachute Team, which has performed at the Gray fairgrounds since 1994. The team will also perform 30-minute shows on the following two nights, each beginning at 7 p.m.

Jameson Rodgers opens the Main Stage’s musical entertainment on Aug. 23. He is known for his hits “Some Girls” and “Cold Beer Calling My Name.” His opening act will be Tyler Booth.

Other performances, which will begin at 8 nightly on the Main Stage, include:

• Matt Stell will take the stage Aug. 27 with his hits “Prayed for You” and “That Ain’t Me No More.”

• Jordan Feliz closes out the week on Aug. 28 with his worship hits “Next To Me” and “Glorify.”

Reserved seats will be available online after 11 a.m. on July 24 and at the fair’s website or at the fairgrounds, beginning at 9 a.m.

All reserved seats will be $15 per seat. Phone orders may be placed beginning July 26 by calling the box office at 477-1420.

The Museum Stage will also see the return of old favorites, such as the Fairest of the Fair Pageant on Aug. 23 at 7:30 p.m., and the Little Miss Pageant on Aug. 24. The Appalachian Fair Got Talent contests will also be featured later in the week.

Monster trucks will return to the Appalachian Arena on Aug. 23-24. Bull riding will follow the next two nights, ending with the demolition derby on Aug. 27-28.

General adult admission tickets are $10, and children 11 and under get in for free when accompanied by an adult.

Online ticket purchases can be made through the fair’s website at www.appalachianfair.com.

Phil Booher, manager of the Appalachian Fair, and Appy the Duck.

Brights Zoo is set to open its brand-new "Penguin Cove" exhibit on Thursday, finally completing a project that began in March 2020.

Erwin received a grant from the U.S. Economic Development Administration to improve their wastewater treatment infrastructure.

Erwin has been awarded a grant to take on a $1.2 million project to expand its wastewater treatment infrastructure.

The $639,789 grant was awarded by the U.S. Economic Development Administration and is funded through the Assistance to Coal Communities program, which assists communities impacted by the declining use of coal through the funding of programs that support economic diversification and workforce development.

The grant will be matched with $639,789 in local dollars, making the total amount of the project more than $1.2 million.

“What they do is if a company is going to expand or locate in the region and invest money, create jobs, then we submit an application on behalf of the community to EDA in order to upgrade infrastructure to serve that business,” said Bill Forrester, the First Tennessee Development District director of community planning, housing and development.

The improved wastewater treatment infrastructure will assist PlastiExports in Erwin with a planned expansion.

That expansion is expected to help create 75 jobs, retain 40 jobs and generate $7 million in private investment within Erwin.

“PlastiExports was creating 75 jobs with their investment of $7 million, that’s how we were able to get the grant funded for Erwin Utilities Authority to upgrade and expand their wastewater treatment plant,” Forrester said.

The grant was written by First Tennessee Development District, which serves eight counties and 20 municipalities in Northeast Tennessee by seeking out EDA funding for community projects to strengthen the local economy and assist in the creation of jobs.

CSX noted in a statement at the time that the longtime Erwin rail terminal “primarily served coal trains,” and said lower traffic levels “no longer support the activities performed there.”

Looking for something to do this weekend? You’re in luck.

Introducing: Press Picks, a recurring series in the Johnson City Press where staff writers and editors share events, activities or other things they’re excited to do this weekend that you might also find fun. And, with this being July 4 weekend, there’s no shortage of things to do. Below, Johnson City Press reporters share their Independence Day weekend plans.

Freedom Fest is sure to be a blast for those looking to celebrate the Fourth of July the traditional way with food vendors, live music from Powershift and the Breakfast Club and a fireworks show at dark. The event will begin at 5 p.m. on Sunday, July 4 at Unicoi Elementary School, and attendees are encouraged to check parking maps on the town’s website beforehand.

If you’re looking for something to do on Saturday instead, you can celebrate the land of the free and those who helped make it that way during the Welcome Home Veterans parade in Erwin. The parade starts on 2nd Street at 10:30 a.m., and afterward, the Erwin Fire Department will open a fire hydrant at the corner of Love and Main streets for a downtown splash dance complete with music, merriment and, most importantly, free snow cones.

Deep in the dog days of summer, it’s a great time to head to a local waterway for some paddling. Watauga Lake is cool and clear, and Boone Lake is finally back near full pool, though it’s a little cloudy. It’s sure to be crowded out there, so be safe and wear a life vest.

I’m going to make tacos this weekend and practice field goals at the ETSU recreation fields. I might also catch up on “Loki” and “Rick & Morty.” I’m not a fireworks fan.

I’m looking forward to a low-key July 4th weekend — maybe a hike or work in the yard — and trying to keep my animals calm from all the fireworks.

As for me, I’ll be at Jonesborough Days Saturday to do some photo work for the paper, and enjoying some sub-80 degree weather. I haven’t decided if I’ll try and catch some fireworks displays yet, but if I were going to go to any of them I’ll probably make my way back to Jonesborough.