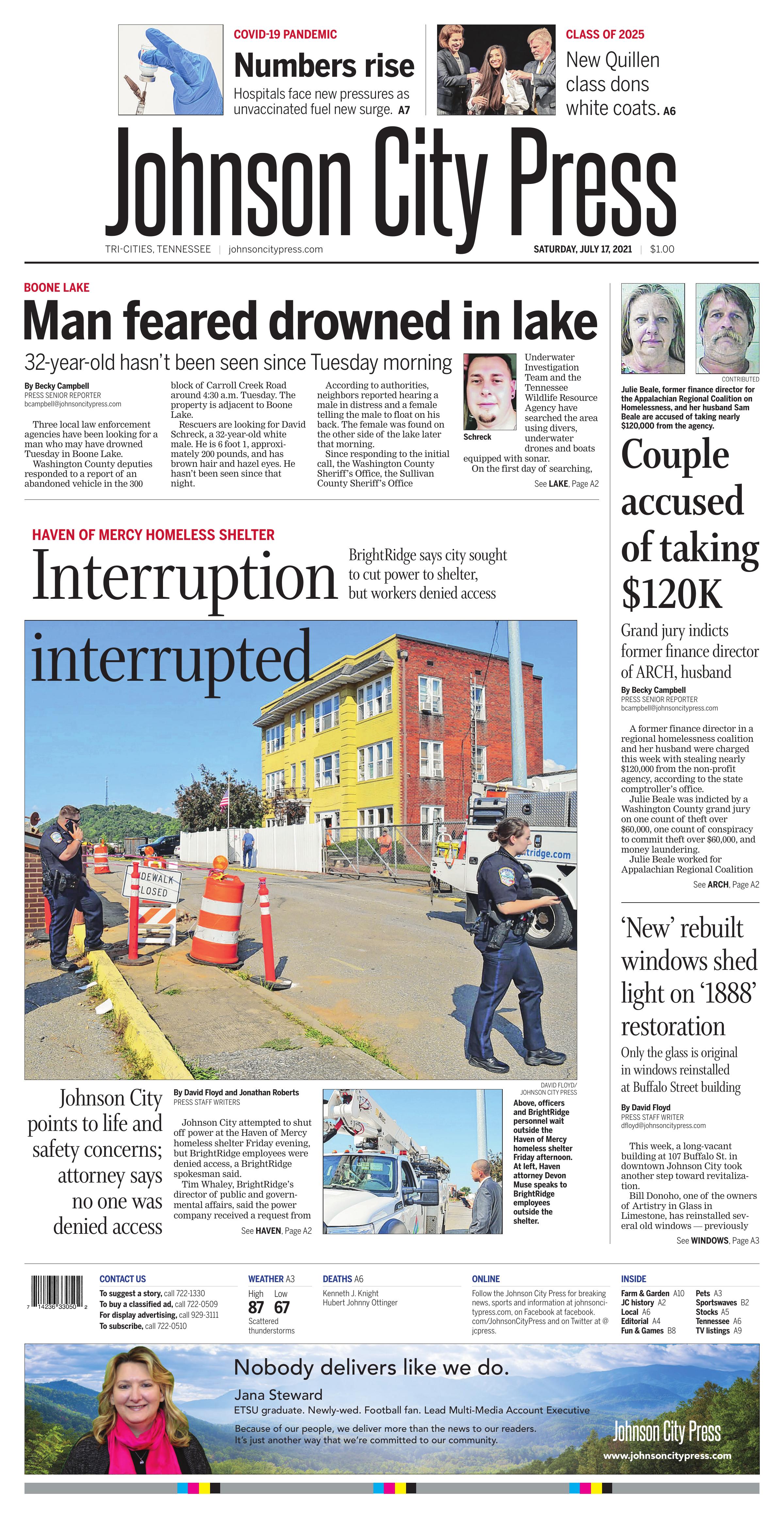 Three local law enforcement agencies have been looking for a man who may have drowned Tuesday in Boone Lake.

Washington County deputies responded to a report of an abandoned vehicle in the 300 block of Carroll Creek Road around 4:30 a.m. Tuesday. The property is adjacent to Boone Lake.

Rescuers are looking for David Schreck, a 32-year-old white male. He is 6 foot 1, approximately 200 pounds, and has brown hair and hazel eyes. He hasn’t been seen since that night.

According to authorities, neighbors reported hearing a male in distress and a female telling the male to float on his back. The female was found on the other side of the lake later that morning.

On the first day of searching, an article of clothing was found by Investigators that was confirmed to be from the victim.

The female provided statements about the incident to investigators and is cooperating.

No foul play is suspected, but the WCSO has asked the public to be on the lookout for Shreck and that boaters at Boone Lake to be aware of this case. Anyone with information is asked to call 423-788-1414.

Johnson City attempted to shut off power at the Haven of Mercy homeless shelter Friday evening, but BrightRidge employees were denied access, a BrightRidge spokesman said.

Tim Whaley, BrightRidge’s director of public and governmental affairs, said the power company received a request from the city’s building department to shut off electricity to the Haven of Mercy due to code violations.

Whaley said BrightRidge officials attempted to gain access to the building to shut off power, but they were denied access. As of Friday evening, power remained on at the Haven of Mercy, according to Whaley.

A Press reporter on the scene reported seeing a BrightRidge truck, along with several Johnson City police officers, but the officers and the truck left shortly after.

Whaley later said the city has asked BrightRidge to hold off on cutting the Haven’s power until further notice.

City spokesperson Ann Marie French said no one at the city was available for an interview on Friday evening, but the city did provide a statement to the Press.

“We received an anonymous complaint that the owner of the Haven of Mercy disconnected power to the annex building weeks ago and that there had been at least one fire in an electrical panel,” she said. “We are currently investigating.”

She confirmed that Johnson City was attempting to shut off the power based on reports of life and safety concerns. French said codes division employees were attempting to gain entry to the building to assess and inspect those concerns.

Devon Muse, an attorney for the Haven of Mercy, was at the shelter Friday talking to BrightRidge employees. He said no one denied staff access, and the shelter did not receive prior notice that the power would be shut off.

Whaley said the city sent a memo to BrightRidge asking them shut off power at the Haven. He said he was unable to provide a copy on Friday, directing the Press to either get it from the city or wait until Monday to submit a request with BrightRidge.

The Press asked the city for copies of the message and the order issued to shut off power at the Haven. French said she was working on getting more information, but she expected it would be Monday before she had it.

Haven of Mercy has been in an ongoing dispute with the city over building code violations, which the city has said increase the risk of injury and fire at the homeless shelter.

In January, the Johnson City Board of Dwelling Standards initially voted to temporarily close the building while the owners made repairs. Among other violations, a closure order issued by the city said permits were needed for a kitchen hood, an electrical sub-panel behind the kitchen and interior electrical issues in the basement and throughout the building.

After a legal tug-of-war with the property owner, the board ultimately opted to rescind its order to vacate in February and heard testimony from shelter residents during a called meeting on March 11. The board continued the issue to a meeting on March 25, during which they set capacity limits on the building. Since then, the BDSR has been receiving regular progress updates.

Occupancy at the homeless shelter has been cut in half while repairs are completed, and there are now about 35 residents living there.

Muse said Friday the Haven of Mercy is making a good faith effort to repair the building.

Muse said shutting off power would displace the residents of the shelter.

“These are people first of all and people who have some difficulties that they’re facing,” Muse said. “The Haven provides some stability and an alternative and rehabilitation for them.”

A former finance director in a regional homelessness coalition and her husband were charged this week with stealing nearly $120,000 from the non-profit agency, according to the state comptroller’s office.

Julie Beale worked for Appalachian Regional Coalition on Homelessness, or ARCH, an agency that provides support to homeless citizens in Northeast Tennessee.

“This case underscores the importance of not giving sole control of financial operations to one person,” said Comptroller Jason Mumpower. “Separating key financial duties and providing increased oversight helps to reduce the risk that fraud will go undetected.”

Julie Beal was accused of misappropriating the nonprofit’s funds between November 2013 and March 2018.

The comptroller’s office alleged that Julie Beale and Sam Beale misappropriated $75,630.06 by making 150 ARCH payments to Sam Beale for work he did not perform. Sam Beale worked as ARCH’s intermittent maintenance provider during the duration of his wife’s tenure at ARCH, and was also awarded two larger construction projects to complete for ARCH in 2016 and 2017, the investigative report said.

The comptroller’s office also alleged that:

Julie Beale resigned her position with ARCH on March 2, 2018.

The comptroller’s office said Julie Beale signed ARCH’s executive director’s name without authorization on at least 304 checks to facilitate her fraudulent payments to herself and family members.

She also was alleged to have signed the executive director’s name without authorization on at least 23 occasions to transfer funds between ARCH bank accounts, the investigative report said, “to effectively conceal the diminished bank account balances resulting from her misappropriation of funds.”

Investigators said she also fabricated at least three invoices totaling $893.78 to conceal checks she wrote to herself and to her husband. Comptroller staff did a forensic examination of Julie Beale’s assigned ARCH computers and located accounting software used to create invoices, as well as the three created invoices.

ARCH’s accounting records showed payments for those invoices were made to Cartridge World, a legitimate ARCH vendor; however, ARCH’s banking records revealed that the three checks were actually paid to Julie Beale and Sam Beale, according to the investigative report.

The report said the checks included false signatures and were deposited into the Beales’ joint checking account.

To view the investigative report, go to: comptroller.tn.gov/office-functions/investigations/find.html, or use the shortcut bit.ly/2USl9lQ.

Bill Donoho, one of the owners of Artistry in Glass, replaces restored windows at the 1888 building in downtown Johnson City.

This week, a long-vacant building at 107 Buffalo St. in downtown Johnson City took another step toward revitalization.

Bill Donoho, one of the owners of Artistry in Glass in Limestone, has reinstalled several old windows — previously caked with paint on both sides — on the building’s facade.

Employees stripped the paint off the windows and replaced the deteriorating metal framework holding the glass in place.

“It was totally rebuilt as if it was new,” Donoho said. “The only thing that we reused was the glass.”

Donoho removed the windows in November 2019. The nature of the work plus the fact that Artistry in Glass is a small shop meant it took some time to get the windows ready to reinstall.

The windows are designed to scatter sunlight as it enters a building, sending it to the back of the room. In the late 1800s, Donoho said, the design served as a way to light a large mercantile store without having to rely on gas during the daytime.

California residents Gemma Velasquez and Murray Cruickshank own the building and told the Johnson City Press in October 2019 that they plan to restore it. They did not respond this week to an email requesting an update on the project.

During a June 27 meeting in 2019, the Johnson City Board of Dwelling Standards and Review found the structure unfit for human habitation. It ordered the owners to provide within 90 days a work plan that included repairing the facade, the storefront and broken glazing.

That plan was submitted to the city, and a building permit was pulled in October 2019 by contractor Ernest Campbell Development for a new storefront, a new front door and to refurbish the artistry glass over the storefront. The total value of the work was estimated at $39,800. The permit is still in progress.

The structure is frequently called the “1888 building” because of the date stamp at the top of one of the walls.

In 2013, inspectors found multiple holes in the building’s roof and determined that the structure’s street-side parapet wall was leaning to the point that they were concerned loose bricks would fall on pedestrians.

The BDSR ordered Velasquez and Cruickshank to rebuild the parapet and fix the roof, repairs that they completed.