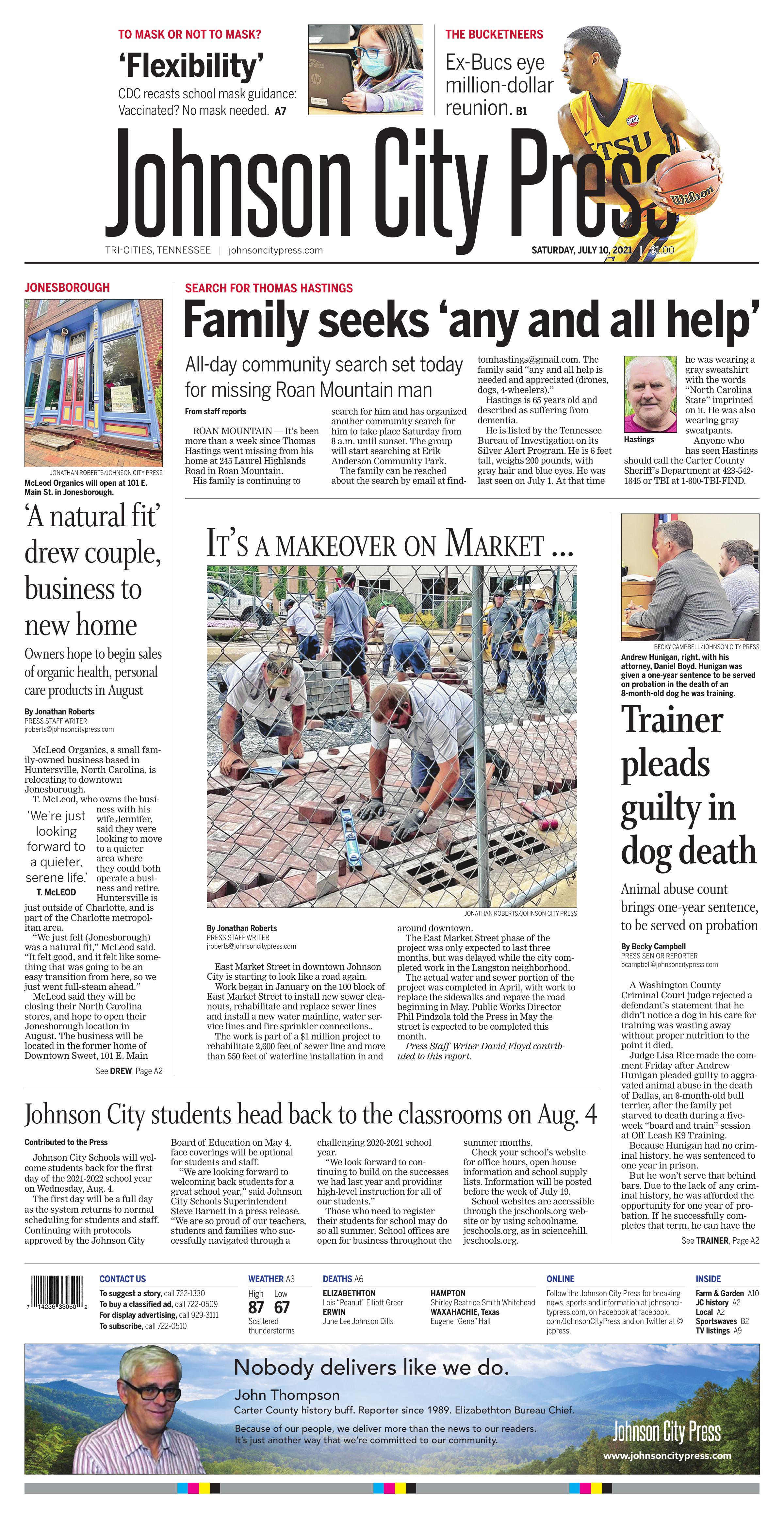 ROAN MOUNTAIN — It’s been more than a week since Thomas Hastings went missing from his home at 245 Laurel Highlands Road in Roan Mountain.

His family is continuing to search for him and has organized another community search for him to take place Saturday from 8 a.m. until sunset. The group will start searching at Erik Anderson Community Park.

The family can be reached about the search by email at findtomhastings@gmail.com. The family said “any and all help is needed and appreciated (drones, dogs, 4-wheelers).”

Hastings is 65 years old and described as suffering from dementia.

He is listed by the Tennessee Bureau of Investigation on its Silver Alert Program. He is 6 feet tall, weighs 200 pounds, with gray hair and blue eyes. He was last seen on July 1. At that time he was wearing a gray sweatshirt with the words “North Carolina State” imprinted on it. He was also wearing gray sweatpants.

East Market Street in downtown Johnson City is starting to look like a road again.

The work is part of a $1 million project to rehabilitate 2,600 feet of sewer line and more than 550 feet of waterline installation in and around downtown.

By July, Johnson City expects to reopen a downtown portion of East Market Street that has been closed for months.

The East Market Street phase of the project was only expected to last three months, but was delayed while the city completed work in the Langston neighborhood.

The actual water and sewer portion of the project was completed in April, with work to replace the sidewalks and repave the road beginning in May. Public Works Director Phil Pindzola told the Press in May the street is expected to be completed this month.

Johnson City Schools will welcome students back for the first day of the 2021-2022 school year on Wednesday, Aug. 4.

“We are looking forward to welcoming back students for a great school year,” said Johnson City Schools Superintendent Steve Barnett in a press release. “We are so proud of our teachers, students and families who successfully navigated through a challenging 2020-2021 school year.

“We look forward to continuing to build on the successes we had last year and providing high-level instruction for all of our students.”

Those who need to register their students for school may do so all summer. School offices are open for business throughout the summer months.

Check your school’s website for office hours, open house information and school supply lists. Information will be posted before the week of July 19.

McLeod Organics will be located at 101 East Main Street

McLeod Organics, a small family-owned business based in Huntersville, North Carolina, is relocating to downtown Jonesborough.

T. McLeod, who owns the business with his wife Jennifer, said they were looking to move to a quieter area where they could both operate a business and retire. Huntersville is just outside of Charlotte, and is part of the Charlotte metropolitan area.

“We just felt (Jonesborough) was a natural fit,” McLeod said. “It felt good, and it felt like something that was going to be an easy transition from here, so we just went full-steam ahead.”

McLeod said they will be closing their North Carolina stores, and hope to open their Jonesborough location in August. The business will be located in the former home of Downtown Sweet, 101 E. Main St., which left the space in May in favor of a mobile food trailer.

McLeod Organics, founded in 2011, has three buildings in Huntersville, which sell a variety of products including gardening supplies, organic local produce, organic personal care products and other items such as essential oils and supplements. McLeod said the Jonesborough store will primarily stock the organic health and personal care products, but didn’t rule out adding other items in the future.

“I’m not coming up to try to create a lot of competition or with the intentions of trying to ruin somebody else’s business, I just want to provide what is (missing) in the area,” McLeod said, adding that he’s looking forward to being part of a flourishing community and helping build it further.

“We’re just totally excited about coming up and getting involved in the community,” McLeod said later, noting he’ll be attending his first Jonesborough Area Merchants and Service Association meeting next week. “We’re just looking forward to a quieter, serene life.” 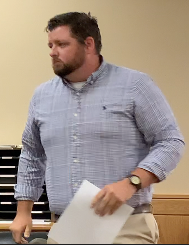 A Washington County Criminal Court judge rejected a defendant’s statement that he didn’t notice a dog in his care for training was wasting away without proper nutrition to the point it died.

Judge Lisa Rice made the comment Friday after Andrew Hunigan pleaded guilty to aggravated animal abuse in the death of Dallas, an 8-month-old bull terrier, after the family pet starved to death during a five-week “board and train” session at Off Leash K9 Training.

Because Hunigan had no criminal history, he was sentenced to one year in prison.

But he won’t serve that behind bars. Due to the lack of any criminal history, he was afforded the opportunity for one year of probation. If he successfully completes that term, he can have the conviction expunged from his record.

It was supposed to be a two-week stint that Hunigan had the dog, but he kept extending it because he said Dallas still needed training, according to court records.

Hunigan was able to make a statement Friday — an allocution — without being subject to cross-examination by Assistant District Attorney Ryan Curtis.

In that statement, Hunigan apologized to Dallas’ owners, Susan and Brian Arnold, who were in the courtroom Friday.

He said he never intended to injure Dallas and didn’t notice the dog was in medical distress.

Rice, however, said there was “no credence” to Hunigan’s claim he didn’t know something was wrong with Dallas.

“Clearly Dallas was in need of nutrition or medical attention,” Rice said. “The circumstances for that animal were horrific.”

Defense attorney Daniel Boyd also told the judge that a necropsy showed Dallas had hydrocephalus, which could have led to behavioral issues that prompted Hunigan to extend the dog’s training time.

Investigators had said the time extensions were because of the dog’s drastically declining health.

The necropsy report, completed by the University of Tennessee veterinary school, said the cause of Dallas’ death was starvation and dehydration. The report showed the dog had 0% body fat and there was no presence of food in the GI tract.

The dog had lost half his body weight in the time he was with Hunigan, officials said. Dallas remained in training that long supposedly because he was not getting the hang of potty training.

Part of a plea hearing includes the DA reading the allegations that would have been presented at trial. As Curtis did that, the Arnolds sat together with their eyes closed, listening to what Dallas was subjected to in the weeks before he died.

They did not want to speak publicly about the matter.

Part of Hunigan’s sentence was also that he could not obtain any more animals of his own — he has three dogs and a cat — and he cannot train animals while under the restraints of the sentence.

His attorney, however, said Hunigan’s career as a dog trainer — “his passion” — was over.