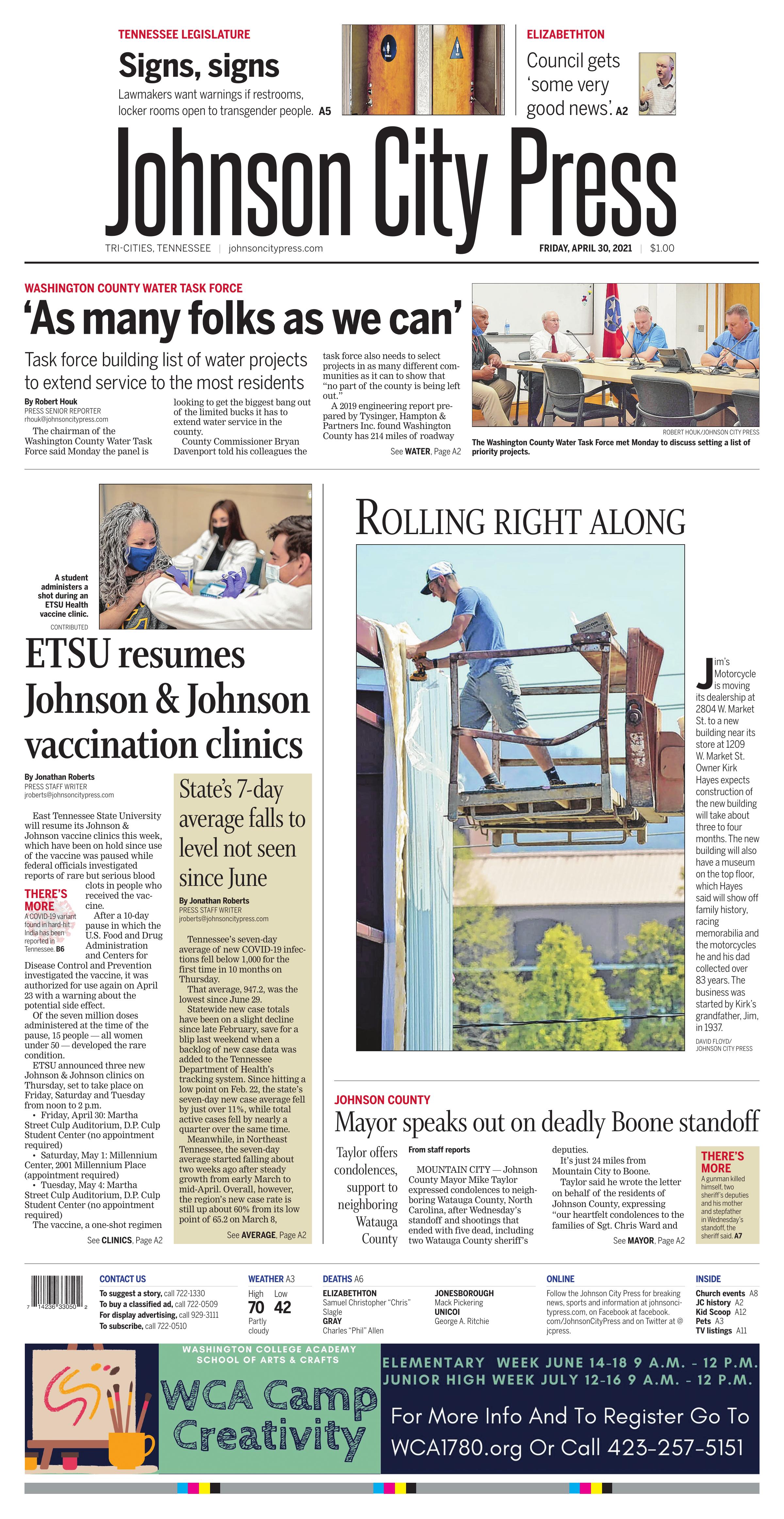 The chairman of the Washington County Water Task Force said Monday the panel is looking to get the biggest bang out of the limited bucks it has to extend water service in the county.

County Commissioner Bryan Davenport told his colleagues the task force also needs to select projects in as many different communities as it can to show that “no part of the county is being left out.”

A 2019 engineering report prepared by Tysinger, Hampton & Partners Inc. found Washington County has 214 miles of roadway with no access to public water.

Davenport noted earlier this year that it is estimated to cost the county nearly $40 million to extend water service to all 359 projects listed in the engineering report.

The task force is working with its municipal partners to develop a priority list of water projects that it plans to take to the county’s Budget Committee in the coming weeks. Davenport said top-rated projects should be those that will extend water to “as many county residents as possible.”

Davenport noted that it “might not be perfect, but we want to serve as many folks as we can with the money that we have.”

The chairman said it was also important to coordinate that work with a seven-person county waterline installation crew the county hopes to establish under the town of Jonesborough’s supervision.

County officials believe such as crew could help save county taxpayers money on installation and speed up work on pending projects, such as extending a waterline on Greenwood Drive and providing service to the Taylor Bridge Road area.

“We need to have a work flow established for our work crew,” Washington County Mayor Joe Grandy said Monday. “We need a couple of years worth of projects identified.”

Washington County officials have applied for a $200,000 community development block grant to provide water to residents in the Taylor Bridge Road area.

The request is the maximum amount available for the project under the grant program administered by the Tennessee Department of Economic and Community Development. The county is expected to contribute $1,695,950 to the waterline project.

Task force member Jill Workman, an engineer with TH&P, told her colleagues she has identified five other “good candidates” for waterline projects for the county to begin working on.

She said each have been ranked “pretty high individually,” and all meet the task force’s goal of choosing projects that would aid in extending waterlines to other needed areas.

She said those areas are located near Conklin Road, Dry Creek Road, Rockhouse Road and Hartmantown Road in the Harmony community.

Tennessee’s seven-day average of new COVID-19 infections fell below 1,000 for the first time in 10 months on Thursday.

Statewide new case totals have been on a slight decline since late February, save for a blip last weekend when a backlog of new case data was added to the Tennessee Department of Health’s tracking system. Since hitting a low point on Feb. 22, the state’s seven-day new case average fell by just over 11%, while total active cases fell by nearly a quarter over the same time.

Meanwhile, in Northeast Tennessee, the seven-day average started falling about two weeks ago after steady growth from early March to mid-April. Overall, however, the region’s new case rate is still up about 60% from its low point of 65.2 on March 8, though it has fallen by 22.2% in the past two weeks.

Active cases, which numbered 1,436 on Thursday, have also seen a decline over the past two weeks, falling by 13.5% in that time.

A more transmissible variant of the novel coronavirus is now widespread in Northeast Tennessee and is fueling new cases and hospitalizations across the region, Ballad Health officials said Wednesday.

“These variants are also aggressive, and cause concern that we could have additional spread,” said Ballad Chief Operating Officer Eric Deaton. “There is this great deal of virus still in our community, and in order for us to curtail it we have to do the things we continue to talk about.

“It’s really important for us to be aware, and although we feel mask mandates will go away, obviously through the orders from the governor and from our local mayors, it’s still important to take personal responsibility to wear a mask appropriately when you’re in large gatherings,” he continued.

Taylor said he wrote the letter on behalf of the residents of Johnson County, expressing “our heartfelt condolences to the families of Sgt. Chris Ward and K-9 Deputy Logan Fox. We want our neighbors across the state line to know they have our love and support during this most difficult time.”

Taylor went on to say that “during times like this, we see the sacrifices our law enforcement makes every day to provide safety and security for our county, state and country. It is not only the selflessness of the law enforcement but the families they leave behind every day they walk out the door to protect their community.

“Sadly, for the families of these distinguished officers, they were not given the comfort of having their loved ones return, but I hope they are provided some level of comfort by knowing so many are praying and supporting them through their time of loss.

“I know the next few days and weeks will be tough for the bravest and finest of Watauga County, but please know my office is available and willing to supply any need we might fulfill on your behalf.”

A student administers a shot during an ETSU Health vaccine clinic.

East Tennessee State University will resume its Johnson & Johnson vaccine clinics this week, which have been on hold since use of the vaccine was paused while federal officials investigated reports of rare but serious blood clots in people who received the vaccine.

After a 10-day pause in which the U.S. Food and Drug Administration and Centers for Disease Control and Prevention investigated the vaccine, it was authorized for use again on April 23 with a warning about the potential side effect.

Of the seven million doses administered at the time of the pause, 15 people — all women under 50 — developed the rare condition.

Faculty, students and staff from ETSU Health colleges, including Quillen College of Medicine, Bill Gatton College of Pharmacy, the College of Nursing and the College of Public Health, will be administering the vaccines and assisting with patient intake and registration.

Where Else Can I Get Vaccinated?

Tennesseans can request an appointment by visiting bit.ly/2YcVMcT and highlighting their county of residence. Additionally, you can call (866) 442-5301 for more information.

To register for a vaccine, visit bit.ly/2ZVJS8c. Local health departments (not including Sullivan County) are also accommodating walk-ins Monday-Friday from 8:30 a.m. to 4 p.m. The Sullivan County Regional Health Department is vaccinating people at Whitetop Creek Park Monday, Wednesday and Friday from 9 a.m. to 3 p.m., and from 9 a.m. to 7 p.m. on Tuesday and Thursday. The Sullivan County site will offer the Pfizer-BioNTech vaccine until Friday, after which it will switch to Johnson & Johnson only.