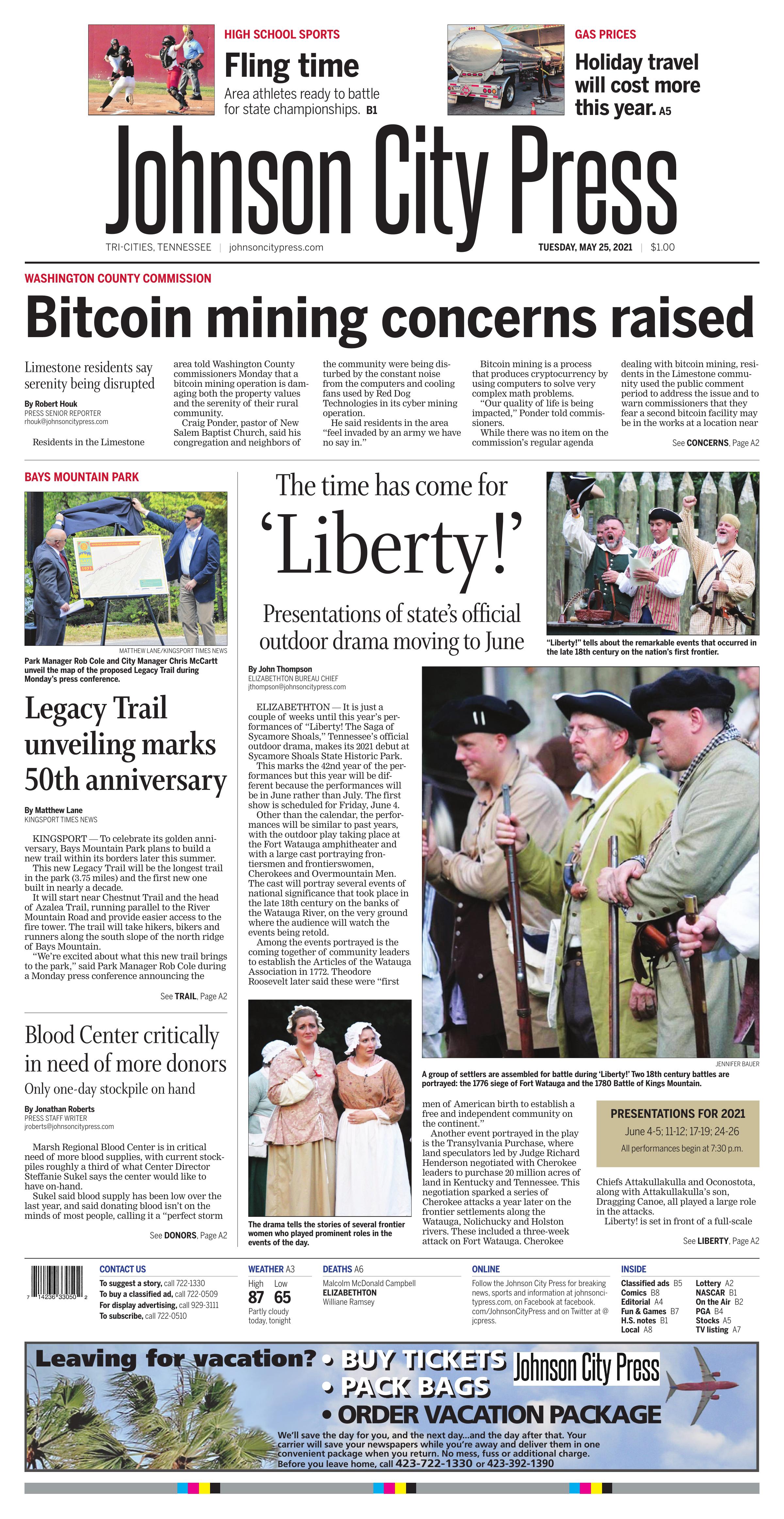 Residents from the Limestone community packed the Washington County Commission meeting in May to speak about the noise from a bitcoin mining operation in their neighborhood.

Residents in the Limestone area told Washington County commissioners Monday that a bitcoin mining operation is damaging both the property values and the serenity of their rural community.

Craig Ponder, pastor of New Salem Baptist Church, said his congregation and neighbors of the community were being disturbed by the constant noise from the computers and cooling fans used by Red Dog Technologies in its cyber mining operation.

He said residents in the area “feel invaded by an army we have no say in.”

“Our quality of life is being impacted,” Ponder told commissioners.

While there was no item on the commission’s regular agenda dealing with bitcoin mining, residents in the Limestone community used the public comment period to address the issue and to warn commissioners that they fear a second bitcoin facility may be in the works at a location near Tenn. Highway 81.

In other business Monday:

In addition, the Election Commission is asking the county to lease event space behind the Food City in Jonesborough as an early voting site in next year’s elections. The Heritage, 161 Molly Grayce Lane, would only be leased for nine weeks to accommodate early voting.

County commissioners voted in March to ask for an extension of the county’s expired lease on the former Ole Towne Ace Hardware building at 220 N. 2nd Ave. in Jonesborough while County Mayor Grandy negotiated a possible option for the county to buy the property.

The 10,700-square-foot hardware building was used by the Election Commission as one of three early voting sites in 2020.

Commissioner Jim Wheeler made a motion under old business to purchase the former hardware building at a negotiated cost of $900,000. The motion failed in a 7 to 8 vote.

The county’s new forensics contract remains at the same rate commissioners approved last year. The county will pay $23,792 a month for pathology services.

• Commissioners agreed to allocate $660,260 in county funds to secure a matching industrial site preparation grant from the Tennessee Valley Authority.

The maximum amount the county can be awarded from the TVA’s InvestPrep program is $750,000. Those funds would come as a result of a 40% local match.

The funding will be used to develop two new sites in the Washington County Industrial Park in Telford.

The drama tells the stories of several frontier women who played prominent roles in the events of the day.

“Liberty!” tells about the remarkable events that occurred in the late 18th century on the nation’s first frontier.

A group of settlers are assembled for battle during ‘Liberty!’ Two 18th century battles are portrayed: the 1776 siege of Fort Watauga and the 1780 Battle of Kings Mountain.

ELIZABETHTON — It is just a couple of weeks until this year’s performances of “Liberty! The Saga of Sycamore Shoals,” Tennessee’s official outdoor drama, makes its 2021 debut at Sycamore Shoals State Historic Park.

Other than the calendar, the performances will be similar to past years, with the outdoor play taking place at the Fort Watauga amphitheater and with a large cast portraying frontiersmen and frontierswomen, Cherokees and Overmountain Men. The cast will portray several events of national significance that took place in the late 18th century on the banks of the Watauga River, on the very ground where the audience will watch the events being retold.

Among the events portrayed is the coming together of community leaders to establish the Articles of the Watauga Association in 1772. Theodore Roosevelt later said these were “first men of American birth to establish a free and independent community on the continent.”

Another event portrayed in the play is the Transylvania Purchase, where land speculators led by Judge Richard Henderson negotiated with Cherokee leaders to purchase 20 million acres of land in Kentucky and Tennessee. This negotiation sparked a series of Cherokee attacks a year later on the frontier settlements along the Watauga, Nolichucky and Holston rivers. These included a three-week attack on Fort Watauga. Cherokee Chiefs Attakullakulla and Oconostota, along with Attakullakulla’s son, Dragging Canoe, all played a large role in the attacks.

Liberty! is set in front of a full-scale replica of Fort Watauga, which was used to defend the settlement against attacks from a faction of the Cherokee, led by Dragging Canoe, who opposed the sale. Ultimately, the settlement was successful in staving off the attack and siege of the fort.

The siege of Fort Watauga is the first of two battles portrayed in the play. The second is the Battle of Kings Mountain, where Overmountain Men who had gathered at Sycamore Shoals crossed the Blue Ridge and joined with other patriots to defeat a force loyal to King George atop Kings Mountain in South Carolina in 1780.

In addition to portraying the stories of large groups of people, the play also provides a sharp focus on such individuals as John Sevier, who would go on to become the first governor of Tennessee, and John Carter and his son, Landon, for whom Carter County is named. The house they built, Carter Mansion, is now protected by Sycamore Shoals State Historic Park and is the oldest frame house in Tennessee.

The story of several frontierswomen is also told in the play, including Mary Patton, who learned the art of manufacturing gunpowder from her father. Her assistance was crucial in the defense of the settlement during the siege. She also supplied the Overmountain Men with a minimum of 500 pounds of gunpowder for their march to Kings Mountain.

The story of “Bonnie Kate” Sherrill is also portrayed. She was one of several young women who had left the fort prior to the 1776 Cherokee attack to milk cows. The women ran back to the fort at the start of the attack, but Sherrill had not been able to reach the gate and, instead, leaped to the top of the stockade and into the arms of John Sevier. A few years later, as a widower, Sevier would marry Sherrill. She would be Sevier’s second wife, but the first first lady of Tennessee. Another wife of a frontier leader, Elizabeth Maclin Carter, was married to Landon Carter. While Carter County was named for him, Elizabethton was named for her. 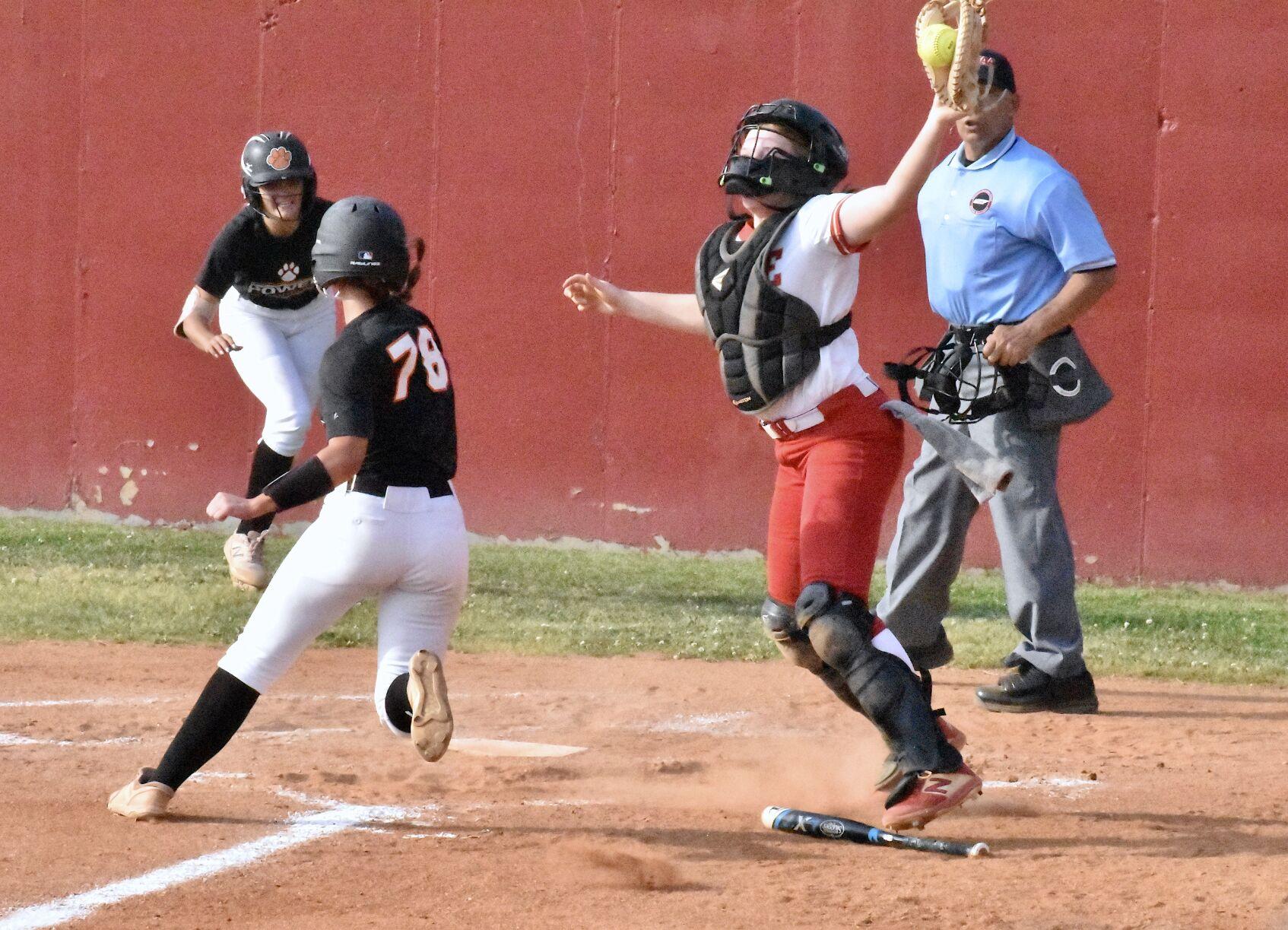 Catcher Savannah Jessee, right, has helped lead Daniel Boone back to the state softball tournament for the third time in school history. The Lady Trailblazers open the double-elimination tournament against Summit at 12:30 p.m. Wednesday.

Park officials displayed the trail marker that will eventually go at the head of the new legacy trail.

More than 100 people turned out for the official kick-off of Bays Mountain Park’s 50th anniversary celebration on Monday.

Members of Girl Scout Troop 1083 recite "Our pledge to our Park" during Monday's kick-off. The pledge includes word of protecting and conserving the natural resources of Bays Mountain Park, calling it "the jewel of Kingsport."

A map of the proposed route of the Legacy Trail.

Former and current Bays Mountain Park employees were recognized for their service to the park during Monday's press conference.

KINGSPORT — To celebrate its golden anniversary, Bays Mountain Park plans to build a new trail within its borders later this summer.

This new Legacy Trail will be the longest trail in the park (3.75 miles) and the first new one built in nearly a decade.

It will start near Chestnut Trail and the head of Azalea Trail, running parallel to the River Mountain Road and provide easier access to the fire tower. The trail will take hikers, bikers and runners along the south slope of the north ridge of Bays Mountain.

“We’re excited about what this new trail brings to the park,” said Park Manager Rob Cole during a Monday press conference announcing the project and kicking off the park’s 50th anniversary. “It may end up as one of our most popular trails.”

Cole said the new trail will help alleviate traffic from current trails, as well as add more variety and work toward creating a complete look within the park using single-track trails.

In addition to announcing the new trail at Monday’s press conference, park officials also unveiled the trail marker, a map of the trail’s proposed route and sang “Happy Birthday” to Bays Mountain Park. The park officially turned 50 on Monday.

Cole said work on the new trail could begin in July and take about three months to complete. The estimated cost of the project is $60,000 to $65,000.

“In true Kingsport tradition the past has left the future in good hands, and the future is bright for Bays Mountain,” Kingsport City Manager Chris McCartt said.

Bays Mountain Park officially opened on May 24, 1971, and this year is celebrating its 50th anniversary with a number of special events, promotions, activities and merchandise.

More than 200,000 visitors pass through Bays Mountain Park each year, making it one of Tennessee’s Top 50 Most Visited Attractions. Bays Mountain Park is one of the nation’s largest city-owned parks with 3,550 acres, including 40 miles of hiking trails, a state-of-the-art planetarium, wildlife habitats, nature exhibits, a 44-acre lake, ropes course with zip line and plenty of trails for mountain biking.

Guidelines are in place for donors who have had COVID-19 or a COVID-19 vaccination. Johnson City Press

Marsh Regional Blood Center is in critical need of more blood supplies, with current stockpiles roughly a third of what Center Director Steffanie Sukel says the center would like to have on-hand.

Sukel said blood supply has been low over the last year, and said donating blood isn’t on the minds of most people, calling it a “perfect storm of events for the past year.” Sukel said they like to have at least a three-day supply of blood on the shelves at Marsh, in addition to what’s in hospitals.

“Right now we’ve got probably about a one-day supply, and the need never stops through any of this,” Sukel said.

“There is no substitute, and we are completely dependent on the generosity of donors in our community to provide this vital life-saving resource,” Sukel said later.

If you’ve recently been vaccinated against the novel coronavirus (COVID-19), you must wait two days before donating blood. If you’ve been infected with COVID-19, you must be 14 days removed from having symptoms. Sukel said donations of plasma from people who’ve recovered from the virus, which is used as a treatment for those infected, are still needed.

Where you can donate

You can donate blood at any of Marsh’s collection centers, which are located in Bristol, Johnson City and Kingsport. The centers are open Monday and Thursday from 10:30 a.m. to 6 p.m. and Tuesday, Wednesday and Friday from 8:30 a.m. to 4 p.m. Kingsport’s center is open Saturday from 8 a.m. to 12:30 p.m. and Sunday from noon-4 p.m. For those donating platelets, call to schedule an appointment.