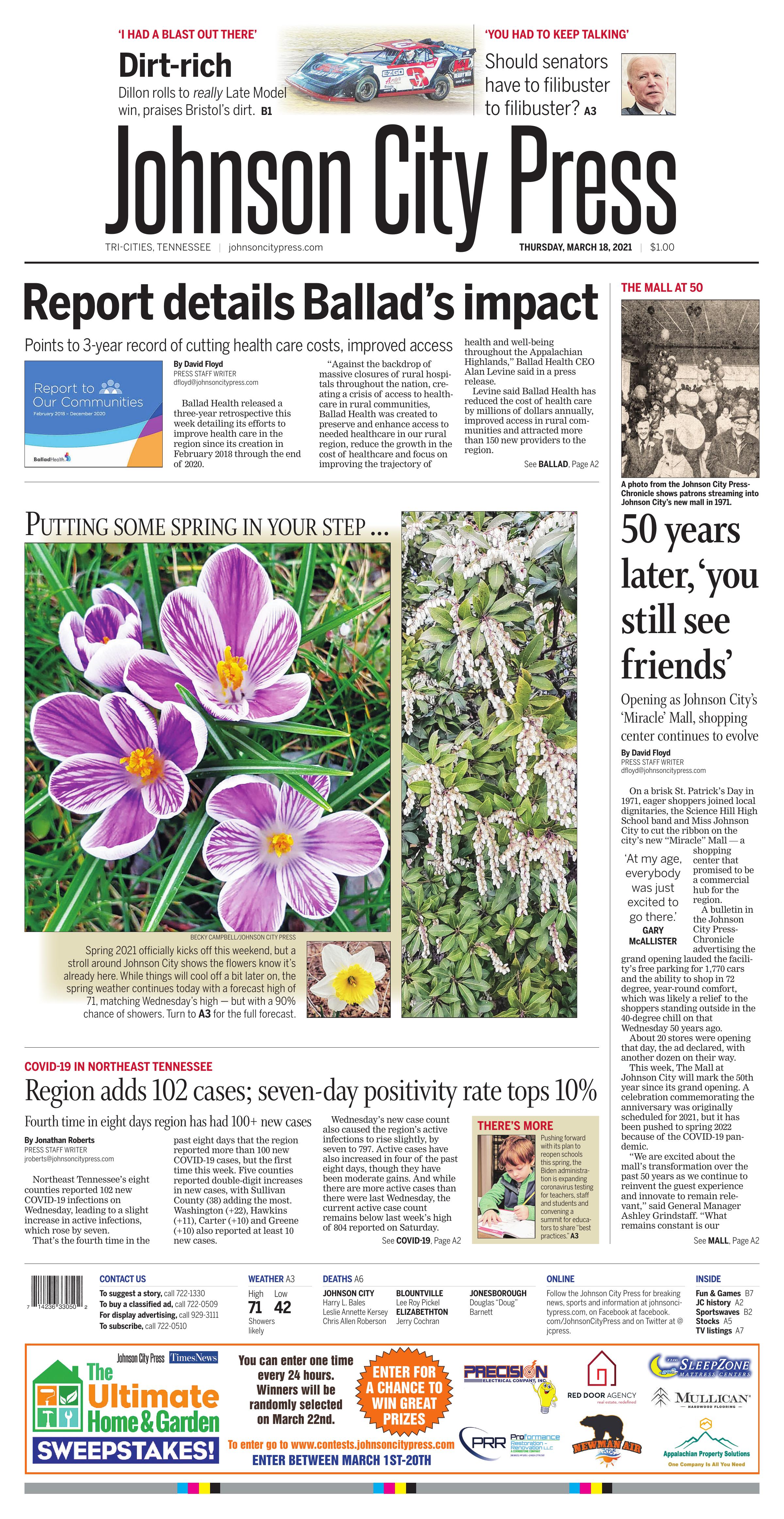 Ballad Health released a report this week detailing its impact on the region from February 2018 through December 2020.

Ballad Health released a three-year retrospective this week detailing its efforts to improve health care in the region since its creation in February 2018 through the end of 2020.

“Against the backdrop of massive closures of rural hospitals throughout the nation, creating a crisis of access to healthcare in rural communities, Ballad Health was created to preserve and enhance access to needed healthcare in our rural region, reduce the growth in the cost of healthcare and focus on improving the trajectory of health and well-being throughout the Appalachian Highlands,” Ballad Health CEO Alan Levine said in a press release.

Levine said Ballad Health has reduced the cost of health care by millions of dollars annually, improved access in rural communities and attracted more than 150 new providers to the region.

The report can be viewed at www.balladhealth.org/cbr.

The health system said in its report that Ballad has had a community benefit totaling almost $420 million over a three-year period.

The three largest pieces of that pie were $167 million spent on unreimbursed care, $116 million on charity care and $75 million in health profession education.

Over the past three years, the system said it also invested $11.4 million in COVID-19 pay incentives and $18 million in pay adjustments for employees. The system also committed to spend more than $100 million over 10 years to increase nursing wages.

Since the merger, the health system said it has recruited 136 physicians, 151 advanced practice providers and six sub-specialty pediatric providers.

Additionally, the health system said Ballad Health stabilized the combined financial conditions of Wellmont Health System and Mountain States Health Alliance, bringing the companies from a combined 0.5% operating margin prior to the merger to 1.7% for the first full year after the merger.

“This improvement was made despite Ballad Health investing millions of dollars into a population health infrastructure, Epic electronic medical record platform, provider recruitment, academics and training,” the system said.

Before the merger, the system said, four hospitals in Northeast Tennessee and three in Southwest Virginia reported ongoing operating losses. Several were at risk of closure.

Ballad said it made efforts to preserve access to health care in rural communities.

That has included submitting an application to the Centers for Medicare and Medicaid to designate Lee County Community Hospital a “Critical Access Hospital,” consolidating two struggling hospitals in Greene County, increasing the number of low-income patients who qualify for charity care and expanding access to pediatric surgeons.

Ballad Health participated in more than 60 clinical trails, spanning fields that include cardiology and oncology.

In 2018, the health system partnered with ETSU to create a fellowship program in addiction medicine. The system will fund the unreimbursed costs of the program for 10 years, which could equal more than $2.5 million.

In 2020, Ballad provided Milligan College with $150,000 to expand its Master of Science in Counseling program.

Between January 2019 and July 2020, Ballad Health said it was able to divert about 21,200 pounds of its waste from landfills thanks to a partnership with Stryker Sustainability Solutions.

That’s the fourth time in the past eight days that the region reported more than 100 new COVID-19 cases, but the first time this week. Five counties reported double-digit increases in new cases, with Sullivan County (38) adding the most. Washington (+22), Hawkins (+11), Carter (+10) and Greene (+10) also reported at least 10 new cases.

Wednesday’s new case count also caused the region’s active infections to rise slightly, by seven to 797. Active cases have also increased in four of the past eight days, though they have been moderate gains. And while there are more active cases than there were last Wednesday, the current active case count remains below last week’s high of 804 reported on Saturday.

Only Hancock (-2), Sullivan (-11) and Unicoi (0) counties didn’t see any increases in their active case counts.

Northeast Tennessee’s seven-day COVID-19 test positivity rate topped 10% for the first time since Feb. 17 on Wednesday, rising to 10.16%. The increase is likely partially due to a sharp decline in testing since the end of last week, though the increase first began more than a week ago.

Ballad Health on Wednesday reported a net increase of three people hospitalized with the coronavirus systemwide, bringing its total back to 70, where its hovered for much of the past two weeks. Since March 5, hospitalizations remained steady between 67 and 73.

Of those hospitalized, 14 (+7) patients were in intensive care and seven were on ventilators.

To register for a vaccine, visit bit.ly/2ZVJS8c. Ballad Health is also offering vaccine appointments in Abingdon, Elizabethton, Kingsport and Norton, which you can register for by visiting bit.ly/3e1ru5Y. To find other vaccination sites, such as pharmacies and grocery stores, visit covidvaccinefinder.org.

Patients on a ventilator: 7

In this file photo, the Mall at Johnson City is packed on Black as holiday shoppers scurry to find the best deals.

An ad in the Johnson City Press-Chronicle in 1971 advertises the grand opening of the "Miracle" Mall.

A page in the Johnson City Press-Chronicle from 1971 shows the layout of the mall and a pair of ads for stores at the shopping center.

In this file photo from the Johnson City Press-Chronicle in 1971, shoppers look into a clothing store at the mall.

A photo in the Johnson City Press-Chronicle from 1971 shows pianos in a store at the Mall at Johnson City.

On a brisk St. Patrick’s Day in 1971, eager shoppers joined local dignitaries, the Science Hill High School band and Miss Johnson City to cut the ribbon on the city’s new “Miracle” Mall — a shopping center that promised to be a commercial hub for the region.

A bulletin in the Johnson City Press-Chronicle advertising the grand opening lauded the facility’s free parking for 1,770 cars and the ability to shop in 72 degree, year-round comfort, which was likely a relief to the shoppers standing outside in the 40-degree chill on that Wednesday 50 years ago.

About 20 stores were opening that day, the ad declared, with another dozen on their way. 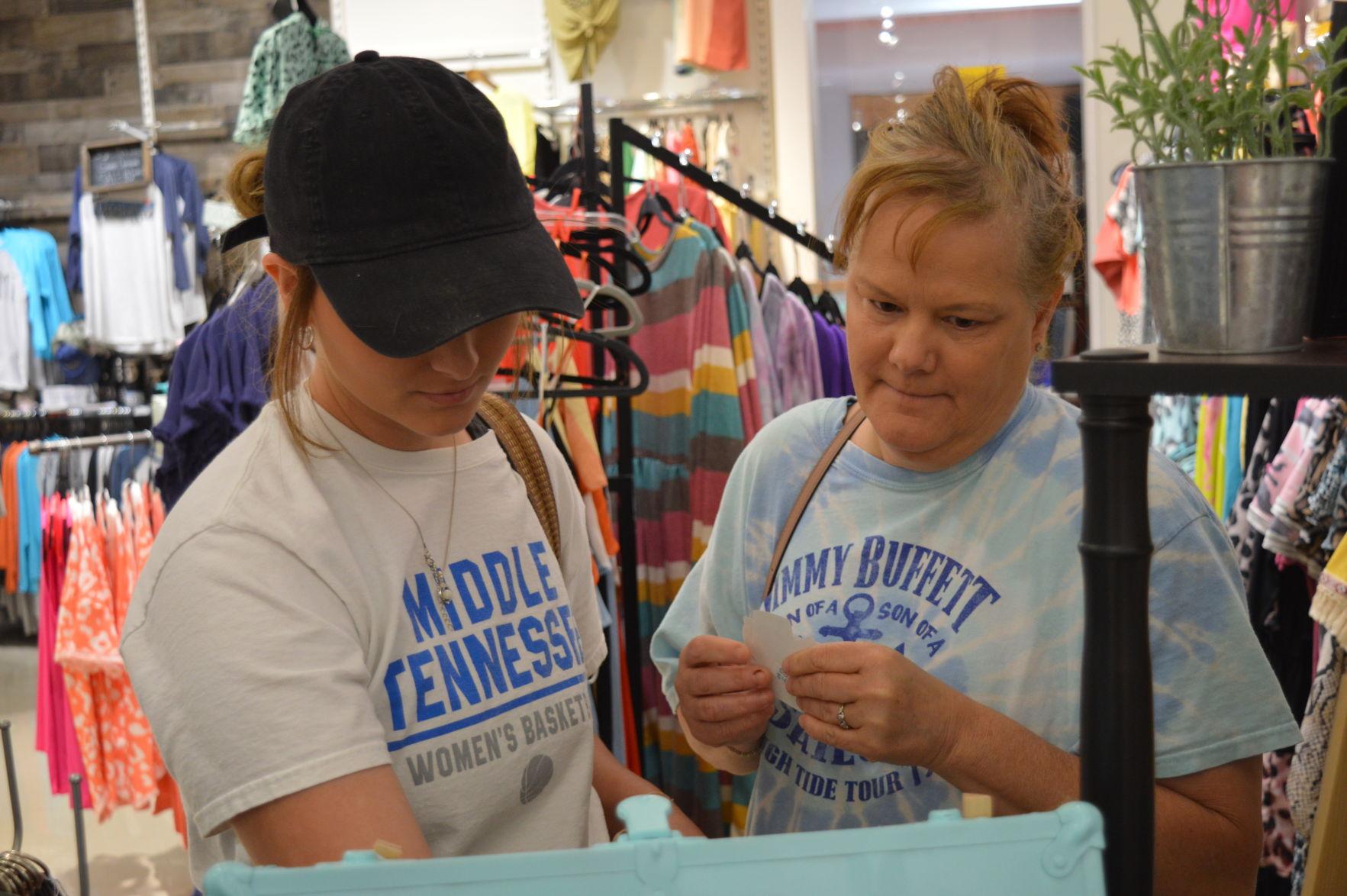 Mother Rena Burrow, right, and daughter Kristyn Burrow, left, shop at the Mall at Johnson City in May.

This week, The Mall at Johnson City will mark the 50th year since its grand opening. A celebration commemorating the anniversary was originally scheduled for 2021, but it has been pushed to spring 2022 because of the COVID-19 pandemic.

“We are excited about the mall’s transformation over the past 50 years as we continue to reinvent the guest experience and innovate to remain relevant,” said General Manager Ashley Grindstaff. “What remains constant is our commitment to Johnson City as a go-to gathering place within our community, as well as an important contributor to the local economy.”

Fifty years ago, the 9:30 a.m. grand opening promised to be a spectacle, featuring balloons, clowns and free samples of Pepsi-Cola. Warren Harding, billed as one of the seven remaining professional Hurdy-Gurdy men in the U.S., was a featured attraction alongside his monkey “Little Joe.” 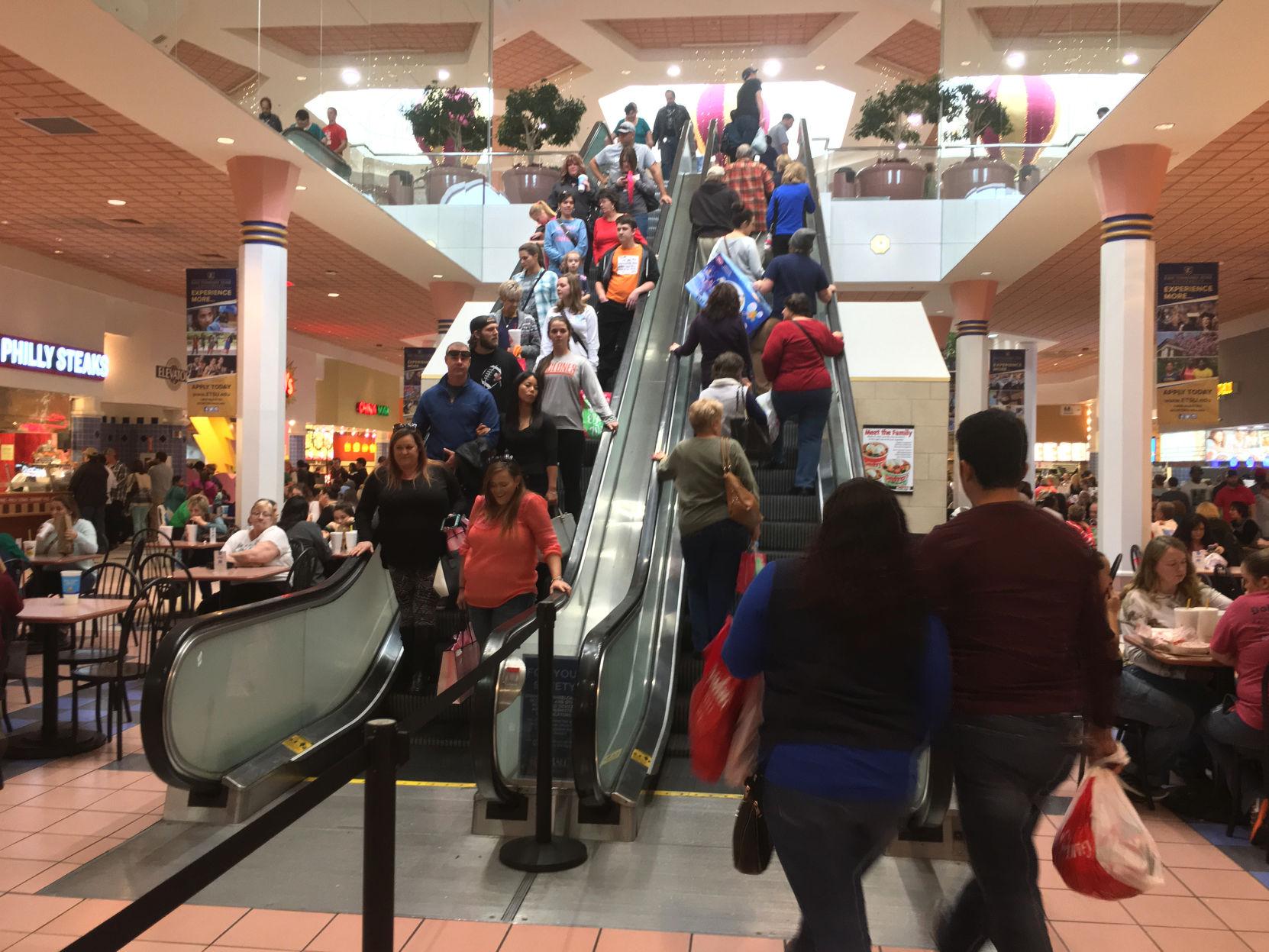 In this file photo, holiday shoppers at the Mall at Johnson City scurry to find the best deals.

“Harding ... is keeping alive the vanishing art,” the ad in the paper said. “With Harding will be ‘Little Joe’, the monkey that solicits coins to the tune of an old hand organ and performs a variety of tricks.”

Attendees could also register for $600 in free gift certificates (redeemable at any mall store) and a free weekend at Beech Mountain, which included a room at the “luxurious” Top of The Beech Motel, lift tickets, ski equipment rental and food.

In keeping with the St. Patrick’s Day spirit, organizers handed out green flowers to place in buttonholes, and the ribbon cut to commemorate the opening was also green.

He stressed that the mall was designed to attract customers from Upper East Tennessee, Southwest Virginia and Western North Carolina.

“Many events will stage in the mall, will cater to your towns,” he told the crowd.

As the doors swung wide, the hundreds of shoppers surged into the building and browsed wares at Gateway Books, Martin-Snader Music, Sears and Lafayette Electronics. The mall promised that more stores, including Kroger, J. Miller Fashions and Bresler’s 33-Flavors Ice Cream, would soon be on their way.

Zale’s Jewelers remains the only original retailer from the mall’s opening 50 years ago that still has space in the center. When it opened, the mall was a single story, but a second floor was added in the 1980s.

Former Washington County Commissioner Gary McAllister was 10 years old when the mall opened in Johnson City. He remembers riding his bike by the site as it was being built. 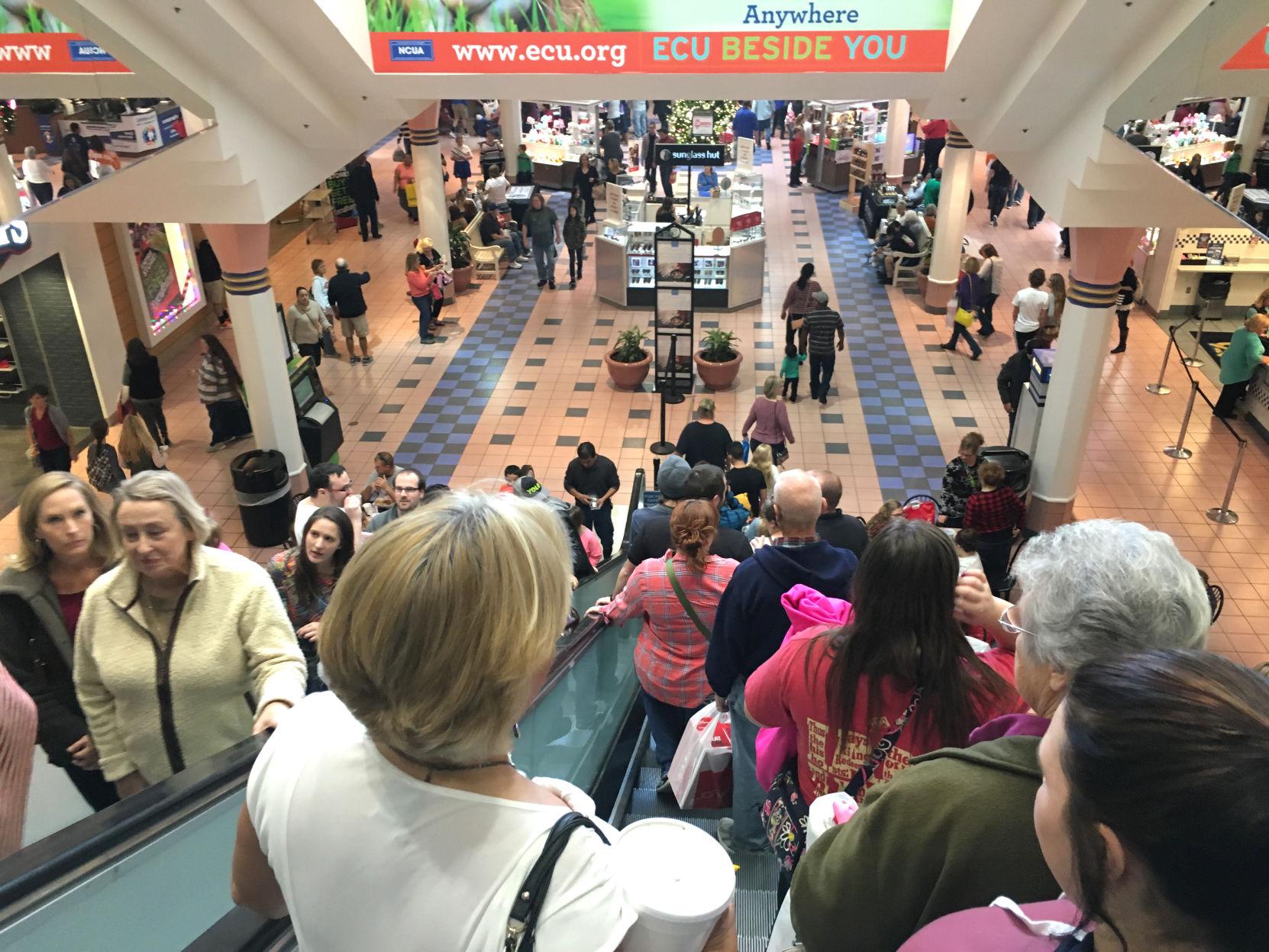 In this file photo, holiday shoppers at the Mall at Johnson City scurry to find the best deals.

“I’d never been to a mall before, so I didn’t know what it was like and couldn’t quite understand the concept, yet,” he said.

McAllister and his friends stopped by the weekend after it opened.

“At my age, everybody was just excited to go there,” he explained.

McAllister recalls the smell of pizza wafting from the Orange Bowl, one of the mall’s first businesses, and dropping coins in the fountain.

“As a kid, I remember I used to have to go downtown and I didn’t always enjoy that because your mom would drag you along and you’d have to go to one store at a time,” McAllister said. “But this you could just ... run around and go to different stores. Your mom would shop in here, you could go somewhere else. It was just a very new experience at the time.”

And the mall is continuing to evolve.

Grindstaff estimates that 45% of the building’s leasable space is new or has been remodeled over the past three years. The shopping center is also partnering with entrepreneurs to bolster small businesses like Pretty as a Peach, Fanatics 101 and Mercantile 423.

Several new businesses are also scheduled to open this spring, including a Chicken Salad Chick and a Chipotle Mexican Grill in a new, multi-tenant building along North Roan Street.

McAllister was in the military for about 28 years, but he would return to the area during the holidays. The mall was always a place he could go to run into old friends.

“The stores are different ... but you still see friends there,” McAllister said. “That’s what brings back good memories to me.”