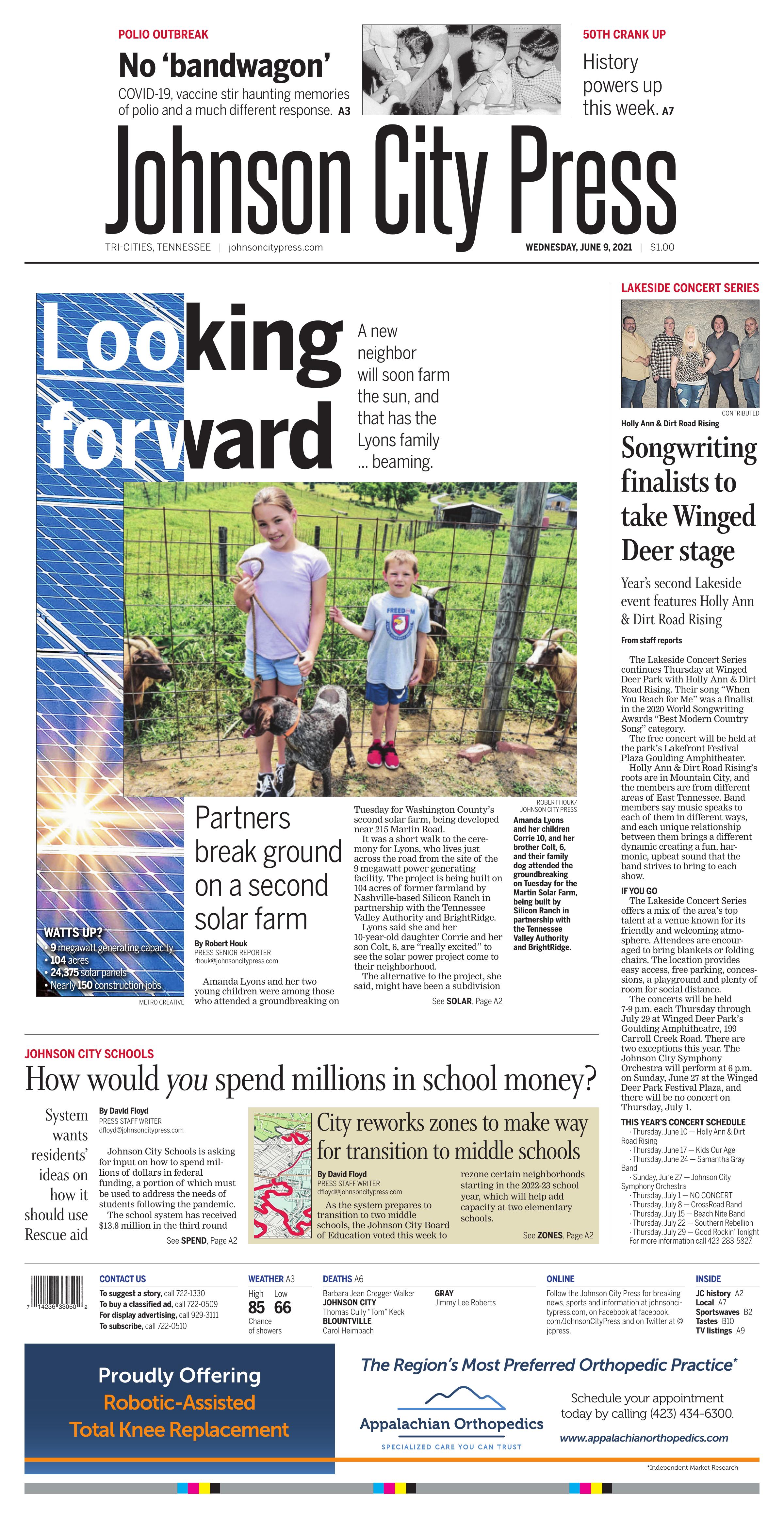 Amanda Lyons attended the attended the groundbreaking Tuesday for the solar farm with  her children Corrie 10, and her brother Colt, 6, and their family dog. The family lives across the road from the solar farm at 215 Martin Road near Jonesborough, and Amanda says she and her kids are "excited" by the green energy project.

The site of the a new 9 megawatt Martin Solar Farm to be operated by Silicon Ranch and BrightRidge on Martin Road in western Washington County.

Congressman Diana Harshbarger and Matt Kisber, chairman of the board of Silicon Ranch, discuss his company's solar farm project in Washington County at the groundbreaking on Tuesday

Amanda Lyons and her two young children were among those who attended a groundbreaking on Tuesday for Washington County’s second solar farm, being developed near 215 Martin Road.

It was a short walk to the ceremony for Lyons, who lives just across the road from the site of the 9 megawatt power generating facility. The project is being built on 104 acres of former farmland by Nashville-based Silicon Ranch in partnership with the Tennessee Valley Authority and BrightRidge.

Lyons said she and her 10-year-old daughter Corrie and her son Colt, 6, are “really excited” to see the solar power project come to their neighborhood.

The alternative to the project, she said, might have been a subdivision that would have brought traffic, congestion and noise to her rural community in western Washington County. Lyons believes the solar development will be a “learning experience,” and she and her children are eager to watch the progress of the project from their front porch.

As a mother, Lyons said she is also pleased that the 24,375 solar panels to be installed at the Martin Solar Farm will generate clean energy that will be offered to East Tennessee State University and to her children’s schools and other K-12 classrooms in the region.

“We hope this project will lead to other advancements and improvements in our community,” BrightRidge CEO Jeff Dykes said during the groundbreaking ceremony. Among those improvements, he noted, would be to lower his electric utility’s rates for renewable energy that would be passed on to public schools.

Construction of the Martin Solar Farm is expected to be completed by the end of the year. The project is expected to generate nearly twice the electricity of a similar Silicon Ranch operation in Telford, which became the first solar farm in Washington County, as well as the first of its type in Northeast Tennessee, when it became operational in early 2019.

The facility is named for the late Ralph Martin, who served many years as a director of the Johnson City Power Board before it became BrightRidge. The solar farm will be on farmland once owned by Martin.

“I served with Ralph Martin for many years,” said Johnson City Commissioner Jenny Brock, a current member of BrightRidge’s board of directors. “Ralph was kind and gentle. He was a smart businessman who helped many in our community.”

Matt Kisber, the chairman of the board of Silicon Ranch, said the Martin Solar Farm project will see his company create nearly 150 construction jobs needed to install a single-axis tracking system that will enable the solar panels to follow the sun across its daily arc. The company uses a similar technology at a facility in Chattanooga.

“So many companies looking to make a decision on expansion or relocation want to know if there is a renewable energy source that they can rely on,” Kisber said.

The project calls for Silicon Ranch to own and operate the Martin Road facility.

BrightRidge officials said under the terms of its 20-year contract with TVA, the utility is allowed to buy 100% of the energy from the solar farm and sell it to its customers during the next 30 years.

Woodland Elementary School could see its student population grow to 553 in the 2022-23 school year as a result of a pair of rezonings.

Officials say more space will be needed to accommodate fifth-graders at Towne Acres.

Officials say more space will be needed to accommodate fifth-graders at Towne Acres.

A map provided by Johnson City Schools shows the areas that will be rezoned from Cherokee Elementary School to Woodland.

A map provided by Johnson City Schools shows the areas that will be rezoned from Towne Acres Elementary School to Lake Ridge.

As the system prepares to transition to two middle schools, the Johnson City Board of Education voted this week to rezone certain neighborhoods starting in the 2022-23 school year, which will help add capacity at two elementary schools.

Currently, Johnson City students attend Indian Trail Intermediate School for grades 5 and 6 before moving to Liberty Bell Middle School for grades 7 and 8. Under the system’s transition plan, both schools would instead serve grades 6-8.

On Monday, the school board voted to rezone homes in two primary areas, including a portion of West Walnut Street down to Huffine Road behind East Tennessee State University. Students living in that area will attend Woodland Elementary School instead of Cherokee Elementary School.

Todd Barnett, the middle grades supervisor for Johnson City Schools, said these changes will help alleviate overcrowding at both Towne Acres and Cherokee. It will also be more convenient for families who already live near Indian Trail and would otherwise have to send their kids to Liberty Bell.

“We felt strongly going through this entire process that we wanted to try to be thoughtful and recognize family concerns,” Barnett said.

As a result, current Towne Acres and Cherokee students and their siblings will be grandfathered in at their current school through fifth grade. Transportation, however, will not be provided beginning in school year 2022-23.

Families living in the rezoned areas can move their children to their new school beginning in 2021-22, but they must provide their own transportation until 2022-23.

“We wanted to be thoughtful of the families and the concerns that they may have and try to make it as seamless as we can,” Barnett said.

As a result of these changes, Cherokee’s projected student population during the 2022-23 school year could be 331 students, a decrease of 125. That takes into account the addition of fifth graders.

Towne Acres could lose 43 students in the 2022-23 school year, bringing their total to 421, and Woodland and Lake Ridge would each gain students, bringing their populations to 553 and 639, respectively. Those estimates assume all families choose to accept the changes and also take into account the addition of fifth grade.

Barnett said the school system has been notifying affected families about the rezoning. Principals will be in touch with those parents to schedule open-house meetings and school tours.

In preparation for the transition to two middle schools, Johnson City is also building classrooms at three of its elementary schools — Woodland, Lake Ridge and South Side — to add room for fifth graders. In total, crews will build 20 classrooms: four at South Side, eight at Woodland and eight at Lake Ridge.

Johnson City Schools is asking for input on how to spend millions of dollars in federal funding, a portion of which must be used to address the needs of students following the pandemic.

The school system has received $13.8 million in the third round of funding through the Elementary and Secondary School Emergency Relief Fund, which was provided under the American Rescue Plan Act. At least $2.7 million, or 20% of the allotment, must be used to meet the academic, social, emotional and mental health needs of students.

“We know that this has been a very challenging year for students and for staff as well as parents and our community,” said Robbie Anderson, the director of accountability and school improvement with Johnson City Schools.

“What we’re trying to do with this funding is be very good stewards of the money that is available and to try to support our students and our teachers with these funds.”

The school system has developed a survey to collect input from an array of stakeholders, including parents, teachers, elected officials, civil rights organizations and others.

“It’s a very broad canvas,” Anderson said, “and I think it’s important to be able to hear from those voices because they’re all going to have a different point of view about these last 15 months and how young people were impacted.”

The system must submit a plan to the Tennessee Department of Education explaining how it will use this money, including addressing learning loss associated with COVID-19.

In addition to the survey, officials have so far held two focus groups: One with teacher leaders through the system’s curriculum council and another with elementary principals. More focus groups will be scheduled over the next couple of weeks.

“It’s really hard for me to speculate at this point because we’re trying to stay very open,” she noted.

The school system will have to track and measure the success of money it spends to address the needs of students.

Anderson said there is also an opportunity to use ESSER funding to tackle issues at facilities. One of the questions in the system’s survey asks if there are specific school buildings that need repairs or improvements. The survey also asks how high respondents would prioritize facility updates that improve indoor air quality.

“We know that there may be some apprehension and ... we are going to use these funds to support students in their return,” she said.

She added that leaders are encouraged by the number of students who have returned for summer programming in June: “We think it really bodes well to have such a large percentage of students that are taking advantage of our summer program.”

Visit tinyurl.com/JCSESSER to take the survey. Responses are due by Friday at 5 p.m.

The Lakeside Concert Series continues Thursday at Winged Deer Park with Holly Ann & Dirt Road Rising. Their song “When You Reach for Me” was a finalist in the 2020 World Songwriting Awards “Best Modern Country Song” category.

The free concert will be held at the park’s Lakefront Festival Plaza Goulding Amphitheater.

Holly Ann & Dirt Road Rising’s roots are in Mountain City, and the members are from different areas of East Tennessee. Band members say music speaks to each of them in different ways, and each unique relationship between them brings a different dynamic creating a fun, harmonic, upbeat sound that the band strives to bring to each show.

The Lakeside Concert Series offers a mix of the area’s top talent at a venue known for its friendly and welcoming atmosphere. Attendees are encouraged to bring blankets or folding chairs. The location provides easy access, free parking, concessions, a playground and plenty of room for social distance.

The concerts will be held 7-9 p.m. each Thursday through July 29 at Winged Deer Park’s Goulding Amphitheatre, 199 Carroll Creek Road. There are two exceptions this year. The Johnson City Symphony Orchestra will perform at 6 p.m. on Sunday, June 27 at the Winged Deer Park Festival Plaza, and there will be no concert on Thursday, July 1.