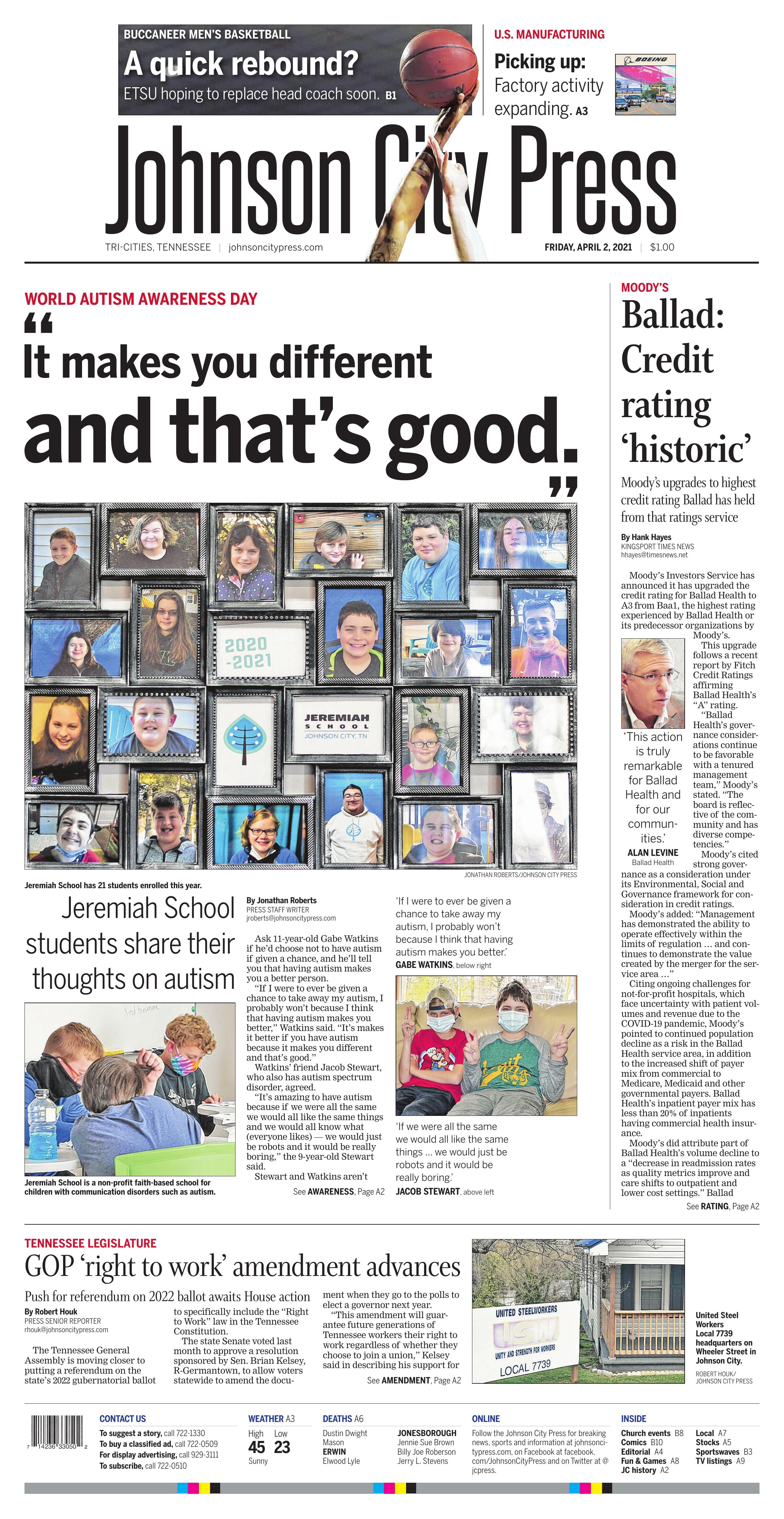 The Jeremiah School has 21 students enrolled this year.

Jacob Stewart (left) and Gabe Watkins (right) pose for a photo at the school on Wednesday, March 31.

The Jeremiah School is a non-profit faith-based school for children with communication disorders such as autism.

Jordan Graham is a student at the Jeremiah School.

Beckett Ford is a student at the Jeremiah School.

A Jeremiah School student does a cartwheel during gym class.

Beckett Ford stretches to hit a shuttlecock during a game of badminton on March 31.

Ask 11-year-old Gabe Watkins if he’d choose not to have autism if given a chance, and he’ll tell you that having autism makes you a better person.

“If I were to ever be given a chance to take away my autism, I probably won’t because I think that having autism makes you better,” Watkins said. “It’s makes it better if you have autism because it makes you different and that’s good.”

“It’s amazing to have autism because if we were all the same we would all like the same things and we would all know what (everyone likes) — we would just be robots and it would be really boring,” the 9-year-old Stewart said.

Stewart and Watkins aren’t alone, especially at the Jeremiah School, a faith-based nonprofit school for children with communication disorders. For many students, the school has had an almost incalculable impact on their lives.

“What I think autism is is that it’s a different personality from a different point of view. It’s like when you’re diagnosed with it a few years after you’re born and it just changes your whole life,” said Stewart, “but that’s actually a good thing because ever since I’ve started being here, I’ve just noticed a lot of things different — I don’t have any bullies I only have friends and everyone thinks of me as a good role model and a leader, and I appreciate that.”

For 15-year-old Beckett Ford, the school’s curriculum has “worked really well,” while Jordan Graham, 16, appreciated the ability to be herself at school.

“They go easy on us, they give us a chance to have a voice and voice our opinion as long as we’re not being rude or anything, of course,” Graham said, “but we get to, like, be ourselves.”

“Every child is a blessing,” wrote one student named Jazmine. “Sometimes people think that I can’t do what other people do, but you can’t force people to believe in you. You have to show them what you can do, and if they still don’t see, then those are not the kind of people who deserve to benefit from anything that grows off your tree.

“Just because I have autism, I am doing everything and there is no autism that can stop me.”

Graham wrote that people don’t believe she has autism because they don’t understand what high-functioning autism is, and said people with autism aren’t rocks without emotions.

“Just because I have autism, I still have emotions,” Graham wrote. “Autistic people are not rocks. It may be hard to talk about emotions sometimes, but there is so much more going on in the minds of these people than you think.”

Ford said he wants people to understand that not everyone with autism has the same abilities or experiences.

The school’s leader said it’s time to go beyond “awareness” about autism.

“I think we’re trying to move away from just autism awareness to just autism acceptance,” said Jo Cullen, the school’s executive director. “I think there is greater awareness out there, but awareness is one step along the journey.”

Cullen said it’s important for the community at large to understand that just because someone has autism, it doesn’t mean they don’t have valuable skills that can translate to higher education or the workplace.

“The statistics for those getting into jobs or going to college are really, really poor, and yet our students have amazing abilities — if only people could look beyond the diagnosis of autism and, perhaps, beyond the things they find a little disconcerting, some of the behaviors.

“These people have amazing talents and skills that make them perfect for jobs; I mean HP, Microsoft, Ernst & Young — there’s so many businesses that are actively trying to recruit people with autism because they see this immense ability.

“It’s not going away, and these people are going to live in our communities, so it’s beyond awareness, we now need to build acceptance and embracing our fellow human beings because it’s just a different way of being human, and I think that’s what people need to understand,” Cullen continued.

“This is not something that you can push to one side, they deserve as much success in their lives as anyone else and they’re living amongst you in your community. Celebrate and embrace and accept.”

Stewart, meanwhile, said “God has created every one of us to be special in each and every way and I want everybody to learn about the truth of God and to learn that autism.”

The Tennessee General Assembly is moving closer to putting a referendum on the state’s 2022 gubernatorial ballot to specifically include the “Right to Work” law in the Tennessee Constitution.

The state Senate voted last month to approve a resolution sponsored by Sen. Brian Kelsey, R-Germantown, to allow voters statewide to amend the document when they go to the polls to elect a governor next year.

“This amendment will guarantee future generations of Tennessee workers their right to work regardless of whether they choose to join a union,” Kelsey said in describing his support for the measure.

The process to amend the state’s Constitution began in the last session of the Republican-controlled state Legislature. It must be approved by a two-thirds majority in the current 112th General Assembly before it can be placed on the next statewide general ballot.

The joint resolution on the constitutional referendum was passed in the Senate on March 8 by a tally of 23 to 7, with all of the chamber’s Democrats voting in opposition. The Right to Work referendum is awaiting action in the state House.

Tennessee is among 27 states with a law that says workers cannot be hired or fired “based on their membership in, affiliation with, resignation from or refusal to join or affiliate with any labor union or employee organization.”

It has been a key part of labor policy in Tennessee since 1947.

Even so, Republican lawmakers believe the provision should be enshrined in the state Constitution.

“Adding this language to our state constitution sends a message very loud and clear that Tennesseans want to make their own choices in the workplace,” state Rep. John Holsclaw, R-Elizabethton, said in a news release late last year.

Tennessee AFL-CIO President Billy Dycus said he was “disappointed, but not surprised” by the state Senate’s vote in March to pass the constitutional referendum on Right to Work.

Dycus issued a statement saying senators who voted for the measure were “setting a dangerous precedent of amending the Tennessee Constitution to cater to a political agenda.”

He also noted that “the Republican supermajority made its priorities abundantly clear once again — it is pro-business and anti-worker.”

Dycus told the Press in November that he estimates “90% of Tennesseans do not understand the Right to Work law,” or are aware that Tennessee is an “at-will” employment state.

“By law, if you don’t belong to the union, but you get into trouble at a company represented by the union, I still have to defend you,” Dycus said.

The Right to Work provision is not the only constitutional amendment Republicans hope to place on the November 2022 ballot.

The state Senate voted in March to approve a referendum on a measure to give the General Assembly the power under the state Constitution to reject the Tennessee Supreme Court’s nominee for state attorney general.

Tennessee is the only state in the nation where its attorney general’s position is filled by the Supreme Court.

Moody’s Investors Service has announced it has upgraded the credit rating for Ballad Health to A3 from Baa1, the highest rating experienced by Ballad Health or its predecessor organizations by Moody’s.

“Ballad Health’s governance considerations continue to be favorable with a tenured management team,” Moody’s stated. “The board is reflective of the community and has diverse competencies.”

Moody’s added: “Management has demonstrated the ability to operate effectively within the limits of regulation … and continues to demonstrate the value created by the merger for the service area …”

Citing ongoing challenges for not-for-profit hospitals, which face uncertainty with patient volumes and revenue due to the COVID-19 pandemic, Moody’s pointed to continued population decline as a risk in the Ballad Health service area, in addition to the increased shift of payer mix from commercial to Medicare, Medicaid and other governmental payers. Ballad Health’s inpatient payer mix has less than 20% of inpatients having commercial health insurance.

Moody’s did attribute part of Ballad Health’s volume decline to a “decrease in readmission rates as quality metrics improve and care shifts to outpatient and lower cost settings.” Ballad Health has publicly reported its efforts to reduce lower-acuity admissions and readmissions and divert patients to lower-cost sites for care as part of its quality improvement initiatives, in addition to improving 13 out of 17 agreed-upon quality measures since its inception in 2018.

“Ballad Health has remained focused on delivering high-quality care, reducing the cost of healthcare and being good stewards of our resources,” said Ballad Health Chairman and Chief Executive Officer Alan Levine. “We are pleased Moody’s cited our improved quality and lower cost of care, because it demonstrates that our strategy of reducing unnecessary duplication, investing in needed services and using our scale and resources to expand access can work. Already, we know that we have reduced the cost of healthcare by more than $200 million annually, which benefits our employers, patients and taxpayers.

“While the majority of credit ratings changes for health systems in the United States have been negative and downgrades during the last year, we are proud that against the backdrop of a negative outlook for the industry, Ballad Health has emerged with the highest credit rating it or its predecessor organizations have ever had. To accomplish this even in the middle of a global pandemic is certainly unusual and rare, but it underscores the effectiveness of our focus on execution of our plan.

“It is our understanding that in the year since March 1, 2020, Moody’s has upgraded only five health systems, while downgrading more than five times that many. So this action is truly remarkable for Ballad Health and for our communities.”

“This upgrade to an A3 is historic for Ballad Health and its predecessor organizations, as none had ever had an “A” rating from Moody’s,” said Ballad Health’s lead independent member of the board of directors, David Lester. “As we celebrate this milestone, our board also recognizes that Ballad Health has reduced the cost of healthcare, been effective stewards of our financial resources, has dramatically improved access to care and measurably improved quality. All these things combined are good news for the people we are entrusted to serve.”

More information about Ballad Health is available at www.balladhealth.org.