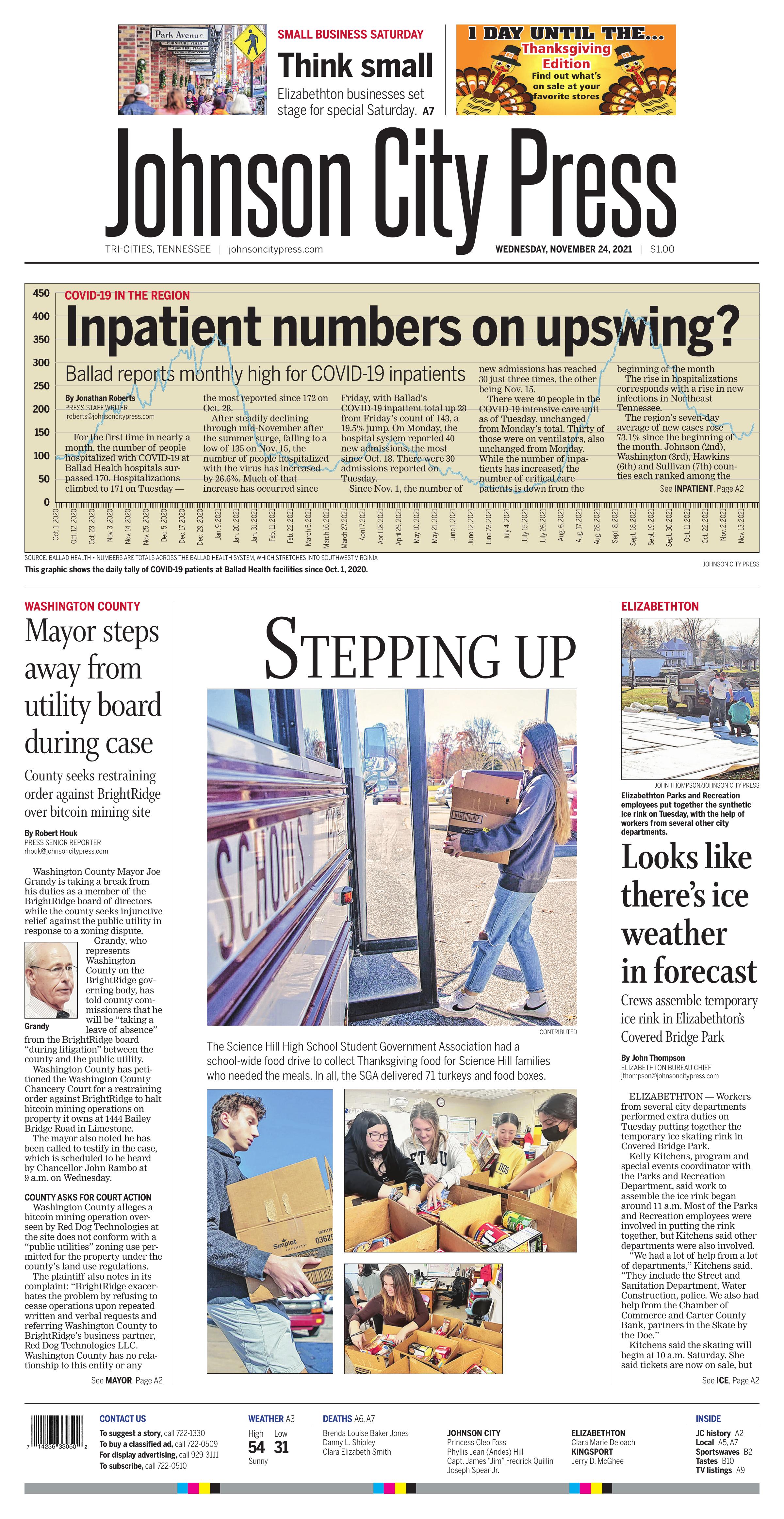 For the first time in nearly a month, the number of people hospitalized with COVID-19 at Ballad Health hospitals surpassed 170. Hospitalizations climbed to 171 on Tuesday — the most reported since 172 on Oct. 28. 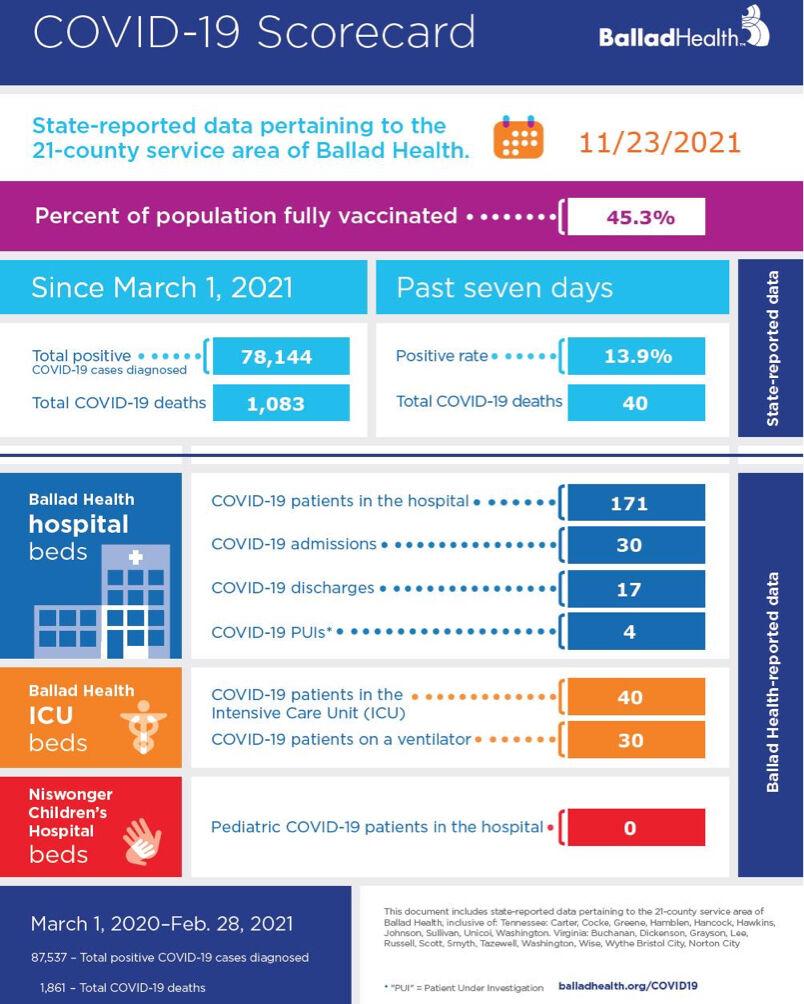 After steadily declining through mid-November after the summer surge, falling to a low of 135 on Nov. 15, the number of people hospitalized with the virus has increased by 26.6%. Much of that increase has occurred since Friday, with Ballad’s COVID-19 inpatient total up 28 from Friday’s count of 143, a 19.5% jump. On Monday, the hospital system reported 40 new admissions, the most since Oct. 18. There were 30 admissions reported on Tuesday.

Since Nov. 1, the number of new admissions has reached 30 just three times, the other being Nov. 15.

The rise in hospitalizations corresponds with a rise in new infections in Northeast Tennessee.

The region’s seven-day average of new cases rose 73.1% since the beginning of the month. Johnson (2nd), Washington (3rd), Hawkins (6th) and Sullivan (7th) counties each ranked among the top 10 in the state for new infections per capita, according to data from the New York Times.

COVID-19 infections on the rise as holidays near, causing concern as flu season nears

Once again, Northeast Tennessee’s coronavirus infections are on the rise — a worrying sign with Thanksgiving less than a week away.

“We do see the numbers going back up ever so slightly, and ... as we head into holidays and indoor gatherings and cold weather to where more people are just inside in general — it really could set us up for another increase in cases.

“I don’t think we’ll necessarily get back to where we were in September, but any sort of increase, ultimately that’s lives that are affected right here in our community and we have to prevent that,” Swift said.

Washington County Mayor Joe Grandy is taking a break from his duties as a member of the BrightRidge board of directors while the county seeks injunctive relief against the public utility in response to a zoning dispute.

Grandy, who represents Washington County on the BrightRidge governing body, has told county commissioners that he will be “taking a leave of absence” from the BrightRidge board “during litigation” between the county and the public utility.

Washington County has petitioned the Washington County Chancery Court for a restraining order against BrightRidge to halt bitcoin mining operations on property it owns at 1444 Bailey Bridge Road in Limestone.

The mayor also noted he has been called to testify in the case, which is scheduled to be heard by Chancellor John Rambo at 9 a.m. on Wednesday.

Washington County alleges a bitcoin mining operation overseen by Red Dog Technologies at the site does not conform with a “public utilities” zoning use permitted for the property under the county’s land use regulations.

Grandy told commissioners at their meeting Monday night that he needed to be “away from that organization,” meaning BrightRidge, while the matter was being heard in the courts.

The BrightRidge board of directors released a statement last week noting they were were disappointed to see the county turn to the courts to settle the dispute over the zoning issue.

“We would have preferred a non-litigated solution to the current disagreement and don’t believe that all other possible solutions were explored,” BrightRidge Board Chairman James Smith said in the statement. “But we will respond to the lawsuit and follow the legal process required of us.”

Washington County commissioners agreed Monday night to address Grandy’s and another county appointment to the BrightRidge board of directors in the county’s Commercial, Industrial and Agricultural Committee in December.

Last month, Commissioner Kent Harris told his colleagues that he had sent an email to Grandy asking that he resign from the BrightRidge board.

Harris cited a number of reasons for asking for Grandy’s resignation, including an earlier email exchange between the mayor and County Attorney Allyson Wilkinson in which she noted the bitcoin operation was not conforming with proper zoning use allowed by the county.

Elizabethton Parks and Recreation employees put together the synthetic ice rink on Tuesday, with the help of workers from several other city departments.

“We had a lot of help from a lot of departments,” Kitchens said. “They include the Street and Sanitation Department, Water Construction, police. We also had help from the Chamber of Commerce and Carter County Bank, partners in the Skate by the Doe.”

Kitchens said the skating will begin at 10 a.m. Saturday. She said tickets are now on sale, but can only be purchased online at skatebythedoe.com. Tickets are $10 for one hour and include skate rentals at no additional cost. No tickets will be sold at the park. Getting the tickets early is a good idea because the rink has a capacity of about 30 skaters at a time, so optimal times will probably sell out.

The public skating days are Saturdays from 10 a.m. to 10 p.m.; Sundays from 1-6 p.m.; Thursdays from 3-9 p.m.; and Fridays from 3-10 p.m. Skating will take place from Nov. 27-Jan. 16. The synthetic rink does not require temperatures to be below freezing to be operational. In addition to the public skating times, there are also preparations for private rentals of the rink on Mondays, Tuesdays, and Wednesdays for birthday parties and other group events.

While the Covered Bridge Park will be busy with skating, the Parks and Recreation Department’s pre-Christmas Saturday events will take place in Edwards Island this week. The island will be transformed into an outdoor movie theater for the showing of “The Polar Express.” The movie is free to attend.

The event, sponsored by Carter County Bank, starts at 4 p.m. and will include free kiddie train rides, free roasted marshmallows and hot chocolate and cookies until 5:30 p.m. The movie gets started at dark. The day will also include a visit from Santa Claus and Mrs. Claus. Free rides on a horse-drawn carriage also will be available at the Covered Bridge Park from 6:30-8:30 p.m.

There will be other Christmas events sponsored by Carter County Bank scheduled for the Saturdays in December. The events will include the free horse-drawn carriage rides and visits with Santa and Mrs. Claus.

On Saturday, Dec. 4, Christmas in Oz will be presented from 3-5 p.m. in Covered Bridge Park, where characters from Oz will help celebrate a unique Christmas.

The Annual Downtown Christmas Parade will be held on Dec. 11 at 6 p.m. As a pre-parade event, “Christmas at Covered Bridge Park” will be presented from 2-5 p.m., featuring free horse-drawn carriage rides and visits with Santa and Mrs. Claus. There will be Storytime with Santa from 2-3 p.m., Christmas music, a Christmas Village, and a light display.

The final Saturday before Christmas will feature the Grinch celebrating “Grinchmas” and wrecking the unclaimed gingerbread covered bridges that had been on display at the Chamber of Commerce during the holiday season.