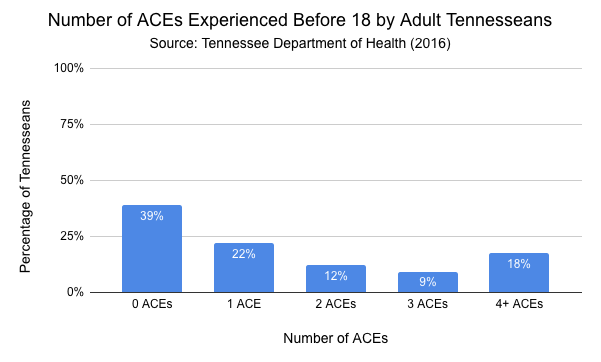 This chart, compiled using data from a Tennessee Department of Health study in 2016, shows that 61% of adult Tennesseans have at least one ACE, and a whopping 27% have had three or more. 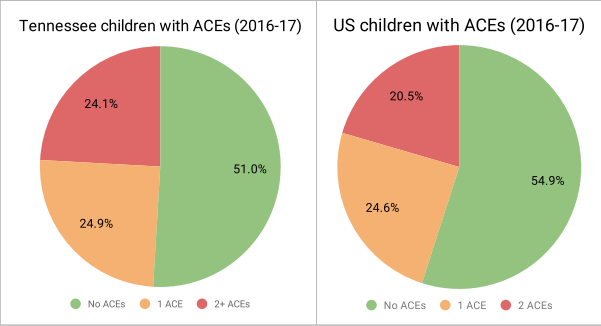 According to the US Census Bureau's 2016-17 National Survey of Children's Health, Tennessee children have experienced more adverse childhood experiences than the average American child. 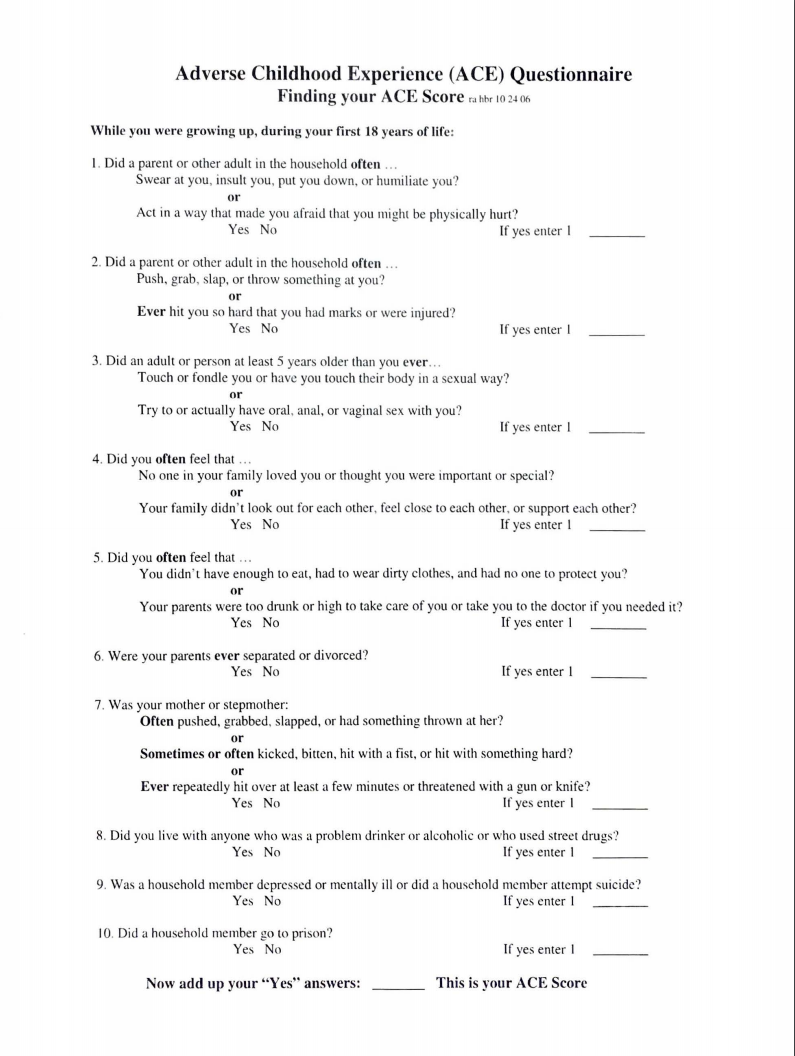 This is a copy of the original ACEs questionnaire. The form has since been expanded to include bullying, racism and poverty. 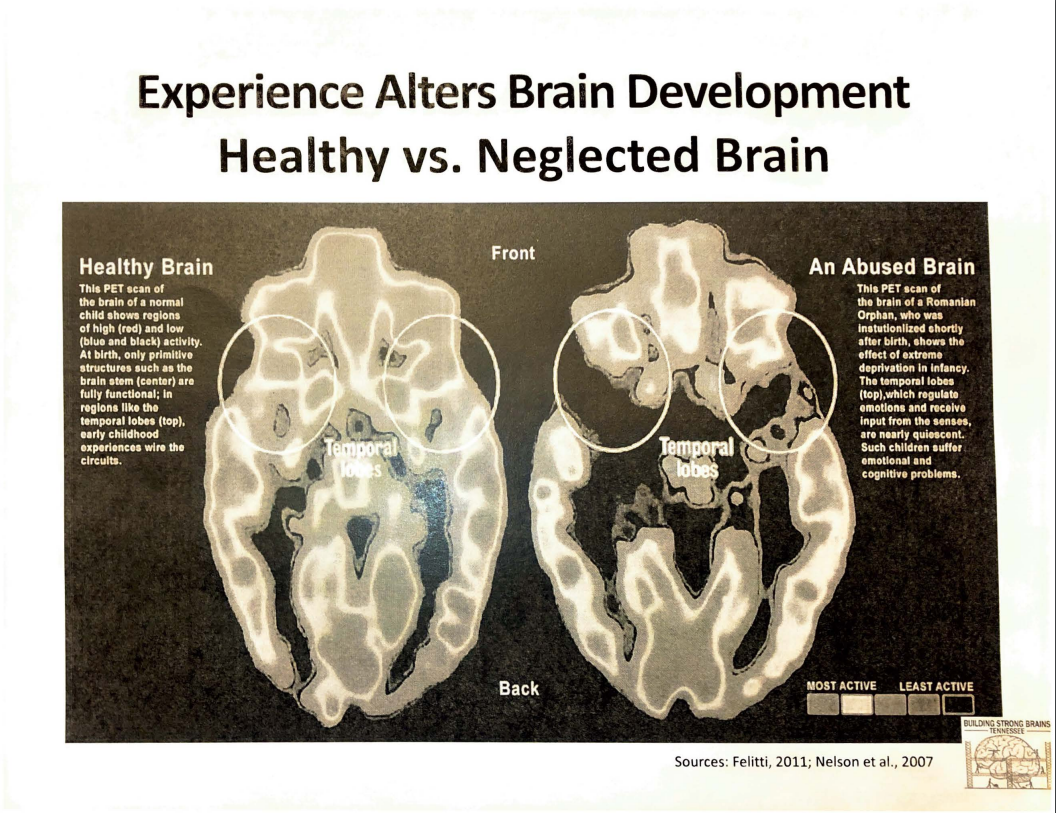 This power point slide created by Building Strong Brains Tennessee, shows how childhood trauma can affect the development of the brain.

This chart, compiled using data from a Tennessee Department of Health study in 2016, shows that 61% of adult Tennesseans have at least one ACE, and a whopping 27% have had three or more.

According to the US Census Bureau's 2016-17 National Survey of Children's Health, Tennessee children have experienced more adverse childhood experiences than the average American child.

This is a copy of the original ACEs questionnaire. The form has since been expanded to include bullying, racism and poverty.

This power point slide created by Building Strong Brains Tennessee, shows how childhood trauma can affect the development of the brain.

Almost half of all American children have experienced at least some form of childhood trauma.

Many of these adverse childhood experiences, or ACEs, can be tied back to drug and substance abuse, but their impact may be more widespread than many perceive.

In Tennessee, an estimated 49% of children have at least one adverse childhood experience, and 24.1% have at least two. Nationally, those numbers sit at 45% and 20.5%, respectively. Children with ACEs, such as neglect, physical and sexual abuse and family dysfunction, are more likely to suffer from a wide range of health disorders, both physical and mental — including substance abuse.

What are ACEs and trauma-informed care?

Adverse childhood experiences are traumas children experience from ages 0-17. The original study identified 10 ACEs, but has since expanded to 14. They include:

• Mental illness in the home.

Trauma-informed care is the framework and structure for treatment that involves understanding, recognizing and responding to the effects of trauma. Being trauma-informed, however, is the individual understanding that many — if not most — people have experienced some form of trauma in their lives, and using that knowledge to provide better, more in-depth and well-rounded care.

In 2018, Johnson City became one of the first trauma-informed communities in the country, and its model — which was developed by Ballad Health Administrator Becky Haas and East Tennessee State University professor Dr. Andi Clements — is being used across the country as a toolkit for all communities.

“Though many communities across the nation are beginning to implement some of these (Substance Abuse Mental Health Services Administration) recommendations, Johnson City clearly stands out as a leader in embracing this model,” Dr. Joan Gillece, director of the National Center for Trauma Informed Care, wrote to Haas and Clements in 2018.

“We’re looking at ways to raise awareness and educate folks, and then collaborate to reduce the effects of childhood trauma,” Haas said. “I’m hopeful we’ll see a decline in children experiencing trauma, but the one thing we learned about ACEs is that what’s predictable is preventable.

“If we know children experience these traumas, then how can we raise up sources of resilience so we can have a buffer,” she added. “(Education) is a must.”

ACEs by the numbers

In 2016, a study done by the Tennessee Department of Health found that 61% of participants had at least one ACE, and 27% had at least three — almost 3% higher than the national average.

A different study, completed by the U.S. Census Bureau in 2017, found that 66% of American adults have at least one ACE, which is significantly higher than the number of children with ACEs, which is estimated to be around 45%.

Tennessee ranks 13th in the nation for highest percentage of children with at least one ACE, Oklahoma currently is the highest at 55%. Additionally, a data analysis done by the Sycamore Institute — a public policy research center for Tennessee — earlier this year found that ACEs cost the state about $5.2 billion in 2017 from direct medical costs and productivity losses.

The most prevalent ACEs in Tennessee are divorce, emotional abuse and substance abuse by a household member.

How it connects to the opioid crisis

Numerous studies have shown the more ACEs a child has, the more likely they are to struggle with substance abuse, health problems and depression, among other health issues.

The evidence, which comes from the U.S. Census Bureau, doesn’t surprise Dr. Daniel Sumrok, assistant professor and former director of the University of Tennessee’s Center for Addiction Science.

“It’s absolutely a clear link … ACEs link all of these things, ” Sumrok said of the connection between ACEs, substance abuse, disease and mental illness.

“They are absolutely a part of (addiction),” she said. “What we have to do as a community, is wrap our arms around individuals that are suffering, and help them figure out how to cope a different way.”

Sumrok also says that not only are ACEs and ACE scores linked to those health effects, they also increase the odds of relapse after getting sober.

“We were able to, incrementally in a linear way, link the likelihood of opiate use disorder relapse to ACE score,” Sumrok said of the findings of a recent study he completed, which monitored more than 100 patients over a two-year period, adding that the results didn’t surprise him.

According to data from the Centers for Disease Control and Prevention, Tennessee ranks 15th for highest opioid overdose death rate per 100,000 people. Ohio, Maine, New Mexico, Florida, Kentucky, West Virginia and North Carolina also rank inside the top 20 in both categories.

Haas, who is training police departments, governments, medical professionals and hosting seminars across the country, is bringing a similar message with her.

“Trauma is the gateway drug,” Haas says. “I feel, as we raise awareness and begin to reduce the effects of childhood trauma, I’m very, very hopeful we’ll start to see addiction, jail overcrowding, homelessness numbers in the next five to ten years start to decline.”