You have permission to edit this article.
Edit
Home
News
Sports
Obituaries
Living
Photo & Video
Opinion
Johnson City Homes for Sale
Classifieds
Send Us Your News
About & Policy
Contact Us
Special Sections
1 of 6 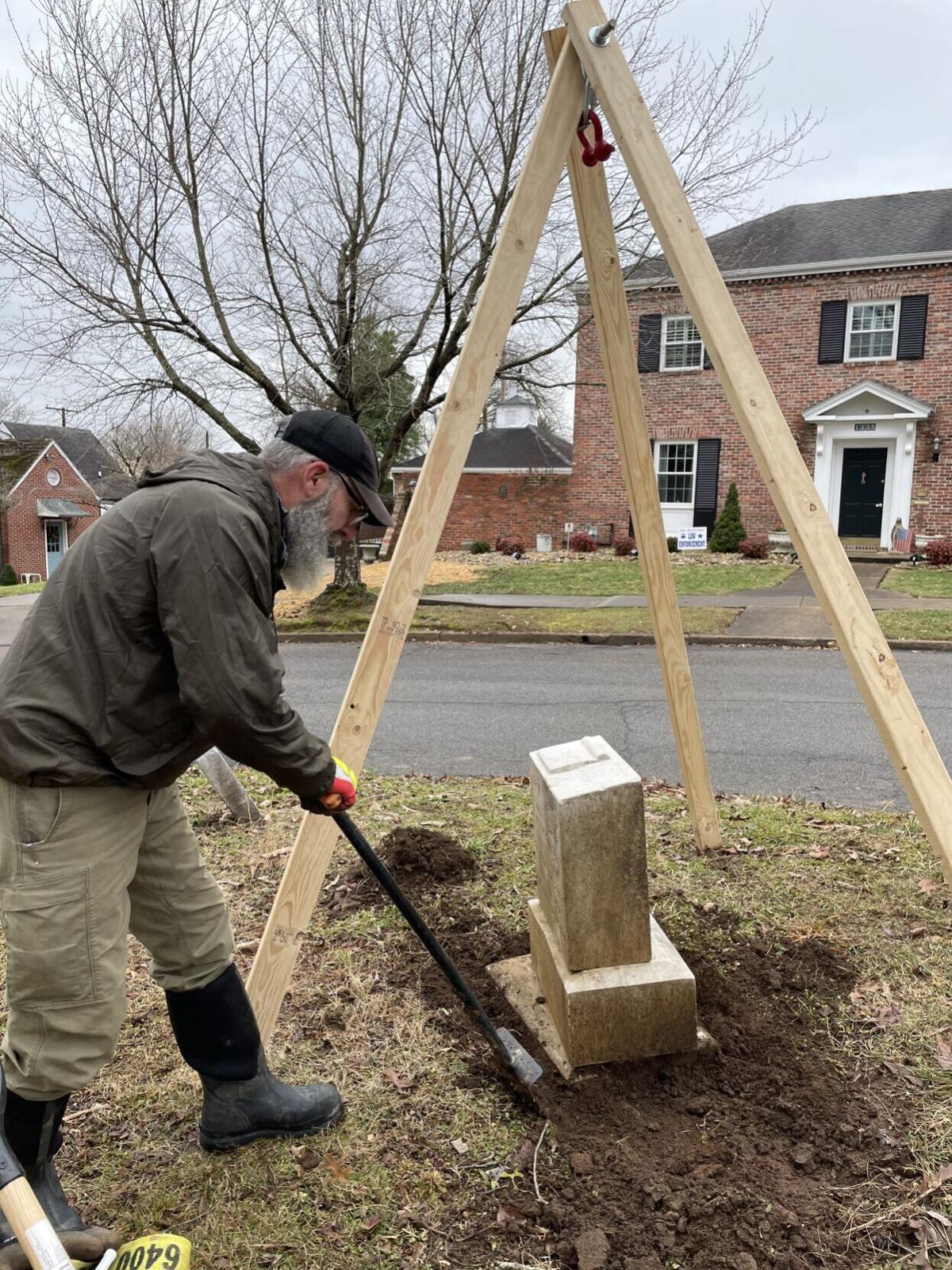 Local preservationist Burke Greear unearths a monument base that has sunken below grade before reassembling the stone. Greear has been working on the weekends to restore the stones in the Samuel Bachman Cemetery in the Fairacres neighborhood for the past four months. 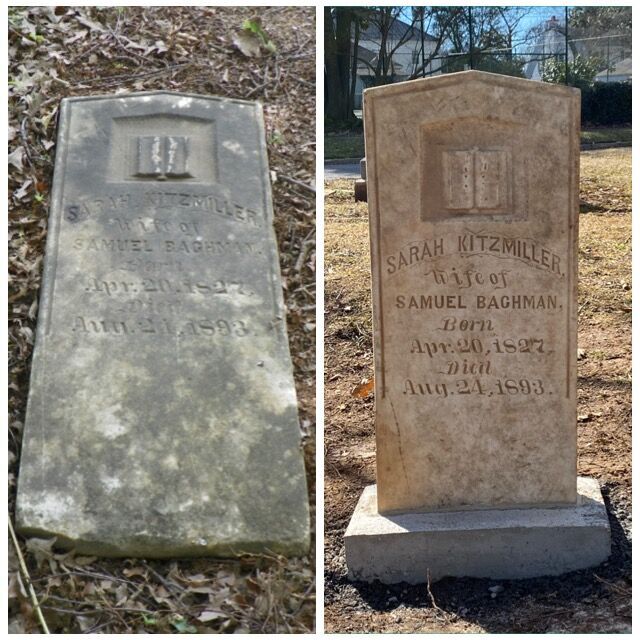 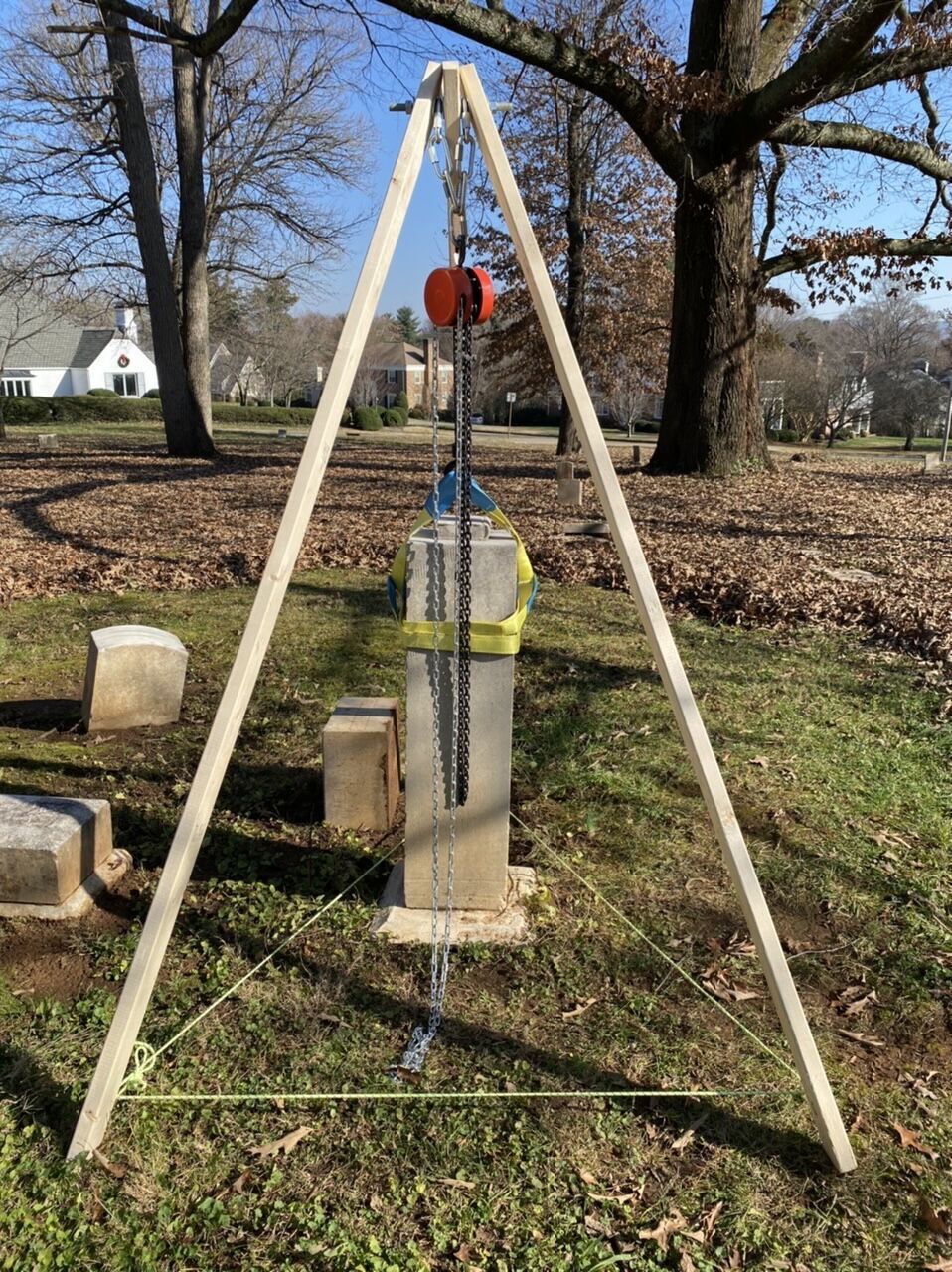 At times, Greear has to use this tripod to lift and set the monuments to their proper place. 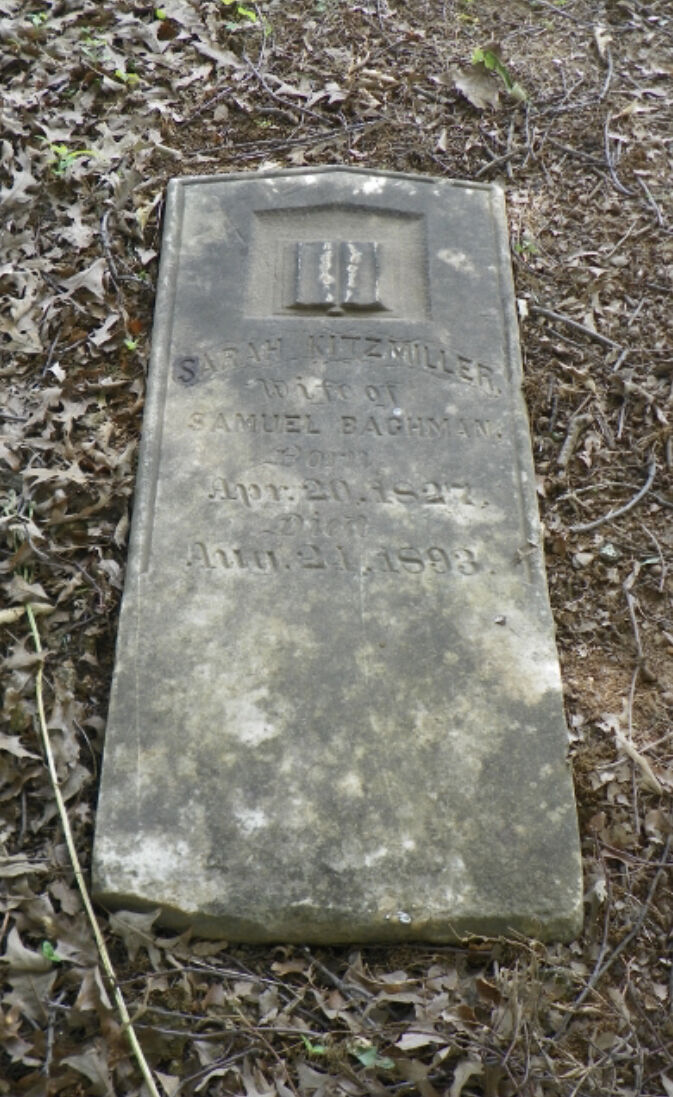 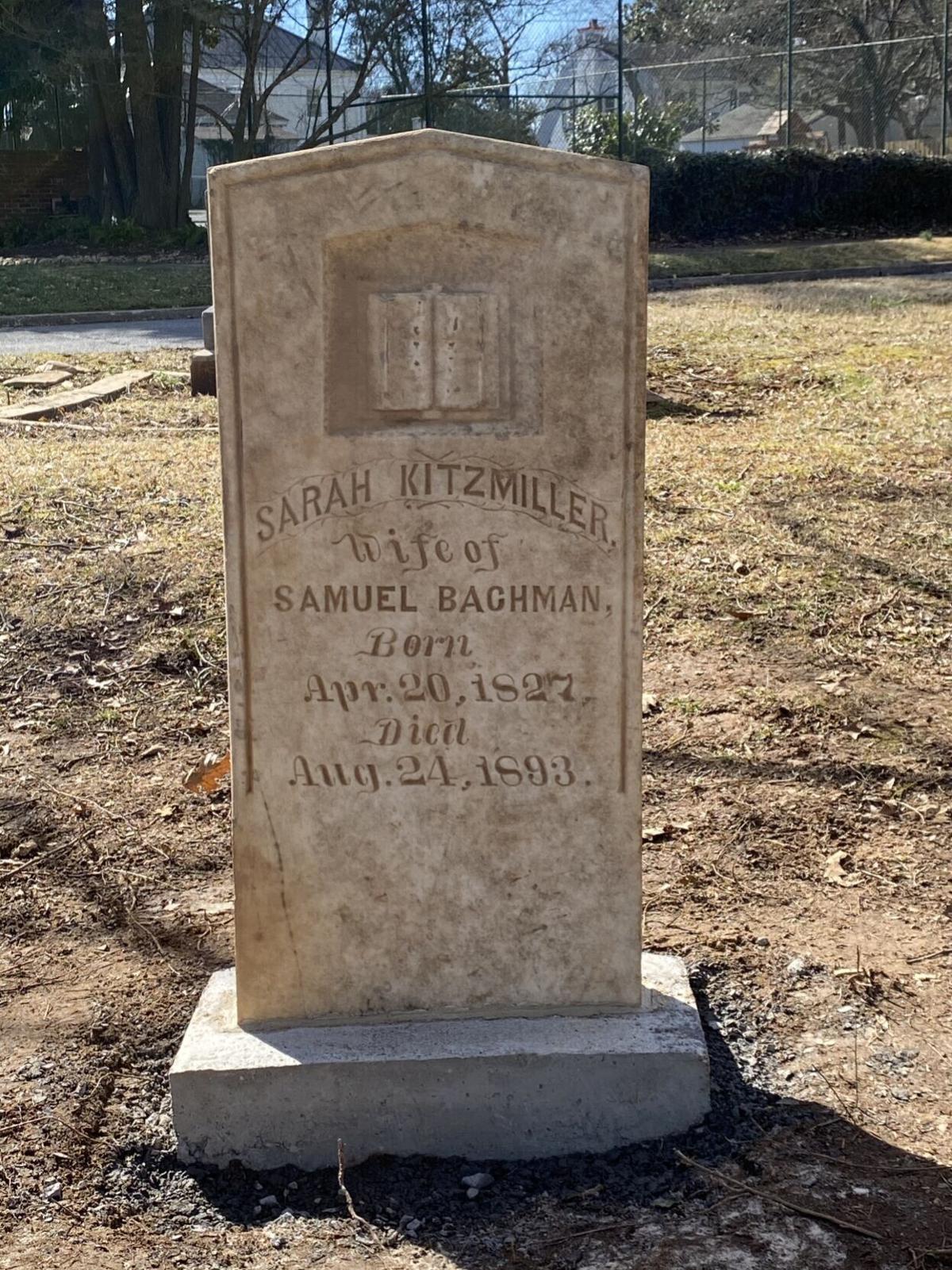 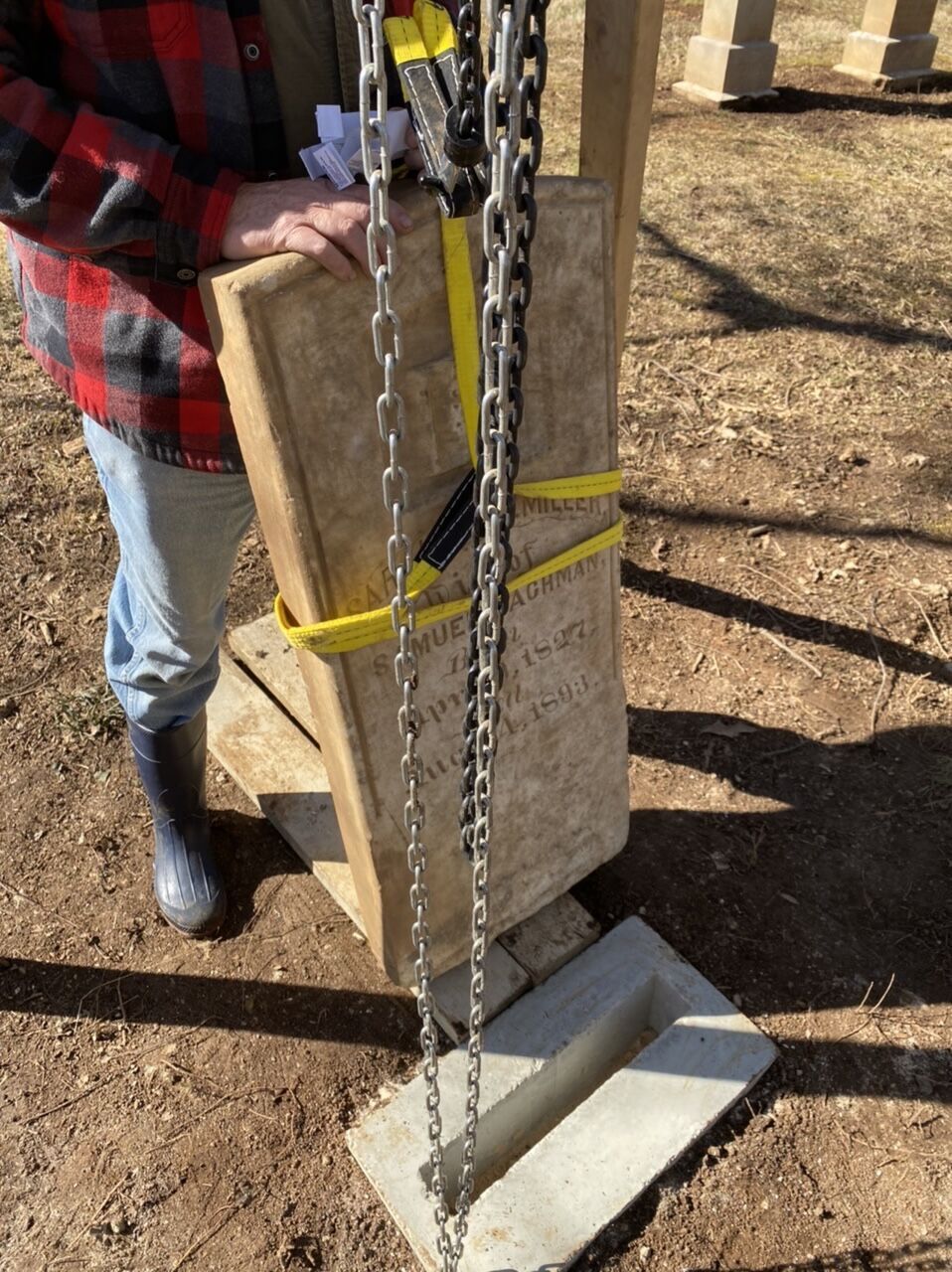 Local preservationist Burke Greear unearths a monument base that has sunken below grade before reassembling the stone. Greear has been working on the weekends to restore the stones in the Samuel Bachman Cemetery in the Fairacres neighborhood for the past four months.

At times, Greear has to use this tripod to lift and set the monuments to their proper place.

KINGSPORT — One of the oldest cemeteries in town is getting a second lease on life due to the hard and skillful work of a local preservationist.

The cemetery in question is located in the heart of the Fairacres neighborhood, just under an acre in size and completely surrounded by Linville Street. It’s known as the Samuel Bachman Cemetery, with many of the monuments dating back to the early 20th century — and a few from the late 1800s.

Naturally, the weather (and a few mischievous teenagers over the years) has taken a toll on the monuments. Some were damaged, broken in half and lying on the ground. All had some amount of moss or lichen growing on them.

Folks in the neighborhood felt something should be done to preserve the cemetery and bring the monuments back to their former appearance. That’s when Fairacres resident Bonnie Macdonald reached out to Burke Greear of Yuma — a park ranger by day who also does monument restoration work on the weekend through his company, Highland Monument Conservation.

“Some of us neighbors when walking by the cemetery said it would be a good thing to restore the monuments. There was a period of time when it was overgrown and there was some damage done to the stones,” Macdonald said. “I’ve seen (Burke) post pictures of his prior work and knew we had an expert in our midst who knew how to do it.”

Greear has been professionally trained in the proper cleaning and repairing of cemetery monuments and stones. He’s not just out there with a jug of bleach and a pressure washer. It’s a job that Greear says involves the right methods, some patience and a lot of surgical elbow grease.

So far, about 80% of the work is done, Greear said. The first step involved treating all 30-plus stones for any kind of bio-growth, such as moss, lichen, algae and fungus, and then using something called Orvus paste (a sulfate detergent) for a deeper clean without any long-term effects on the stones.

Some of the monuments that were in two pieces had to be repaired and put back in place using the methods of the time; others were in need of a better foundation. Greear accomplished that with the help of his father-in-law, Richard Howard, who helps him from time to time with his preservationist work.

“When a stone has been lying on its back on the ground in two different pieces for the last hundred years and you bring that back up, repair it, clean it and make it look as close as possible to the day it was set, there’s a lot of satisfaction that comes out of that,” Greear said. “ These stones represent to me a life lived, and how long do we want the memory of life to last? Your answer should be as long as possible and that’s my mission: to stabilize these old stones and give them a firm foundations, clean off the things that are degrading them and get them going for another 150 years.”

More than 30 stones and monuments can be found in the Samuel Bachman Cemetery, with most dating to the early 20th century. The oldest grave — Barbara Bachman’s — is dated Nov. 11, 1862, while the newest one — Flossie Parker — is dated May 13, 1919.

At least a dozen babies and toddlers are buried there, as are the cemetery’s namesakes, Samuel and Sarah Bachman.

Greear said he believes one of the stones that doesn’t have a date could date back to 1840. It’s made of limestone and that’s what people made headstones out of at that time, he said.

“Some of the headstones were taken downtown and dumped in a hotel pool in the 1950s; kids would move them around or put one on a porch as a prank. There’s no telling how many people are buried there,” Greear said. “The stones are just a fraction of the burials.”