2 injured in motorcycle crash on I-26

Elizabethton's Angie Barker is shown with her winning throw at the AAU Junior Olympics Trials at Daniel Boone High School in 1981. 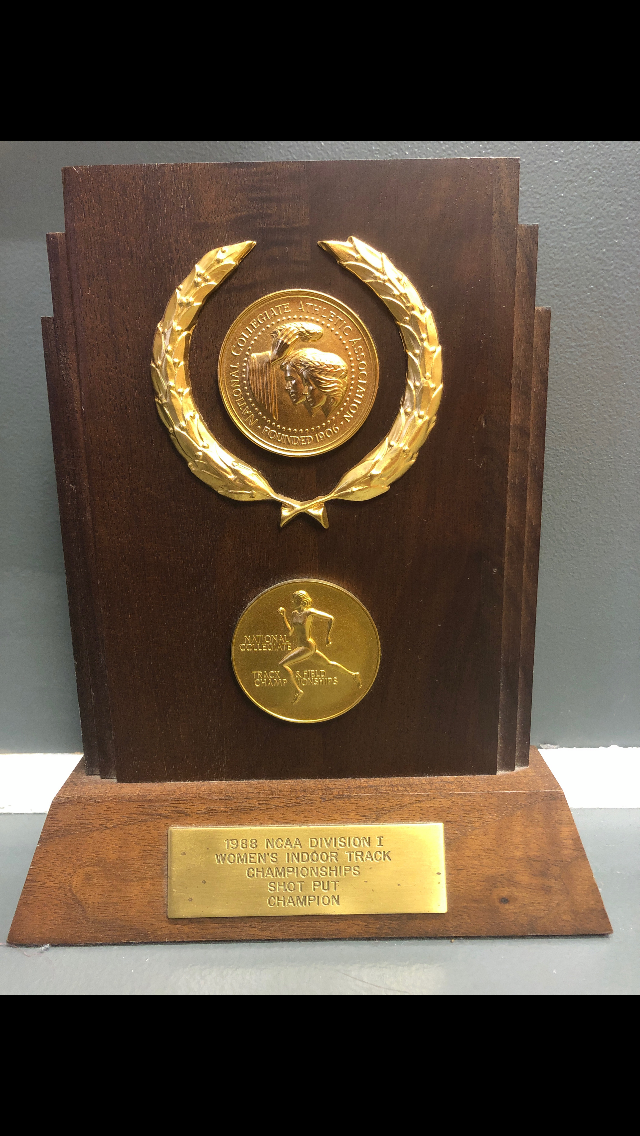 Elizabethton's Angie Barker is shown with her winning throw at the AAU Junior Olympics Trials at Daniel Boone High School in 1981.

The following is part of an ongoing series looking at past outstanding performers called “BackTrack: Exploring Lost Track and Field Legends” from Northeast Tennessee and Southwest Virginia.

Domination is defined as “the exercise of control or influence over someone or something.”

And in the 1980s, when girls stepped into the throwing ring in East Tennessee, all but one was pretty much competing for second place.

It was almost a foregone conclusion that former Elizabethton Lady Cyclones and East Tennessee State throws queen Angie Barker would win before the first shot put or discus was thrown.

“It’s great knowing that I left that much of an impact on track coaches and athletes this many years later,” Barker said.

No girl at any division in the state has come within three feet of the shot put and within six feet of the discus since the records were set 36 years ago.

She was also the 1988 NCAA indoor shot put national champion for ETSU, which qualified her for the Olympic Trials that same year. Furthermore, she was a two-time All-American and a 1988 national Strength & Conditioning All-American.

Barker was naturally gifted with strength and a competitive drive instilled in her by her older brother.

“I grew up wanting to do everything better than my brother and I think that’s really what got me started in sports,” she said.

“I had thrown a little bit in middle school and Coach Presnell said I should try it because I was so strong,” she said. “(Presnell) really had a big influence on my entire throwing career. He was amazing and he cared so much. He was very knowledgeable and was always there for me.”

Once Barker got her technique down in both events, the rest is history. She quit other sports like basketball and volleyball in order to hone her abilities in the throws.

Had Barker not blown her knee out in 1982, there is no doubt that she would have won both events.

The state meet in 1984 was one of those days that throwers dream about — where everything clicks.

“I stepped up and every throw that I made in both events was a new state record,” she said. “The discus throw that I had specifically was one of those where I knew it was really good coming out of my hand.”

Barker holds the oldest meet record at the Times-News Relays, having hurled a throw of 134-0 back in 1984. She won the Big 9 Conference meet three times each in the shot put and discus. She still holds the meet record in each event.

She was named a high school All-American by the NHSACA in 1984.

“Last Tuesday, she threw 124 feet in the discus and I sat her down and chewed her out,” Presnell said in a 1984 interview with Kingsport Times-News reporter Bob Stoner. “She just tried too hard. We talked about it a little, then she went over and threw 147-11 (11 feet further than the state record at the time).

“One of her biggest problems is she tries too hard,” he continued. “She has a competitive desire that you wouldn’t believe.”

Barker initially signed with Eastern Kentucky and had a tremendous start.

She was the Ohio Valley Conference indoor meet champion in the shot put her freshman campaign and repeated the feat in the outdoor season along with the discus title.

In total during her time throwing for the Colonels, she racked up seven conference titles and still holds the indoor conference meet record in the shot put (51-1).

Her discus school record was not surpassed until 1999 and she is still over eight feet in front of third place on the list.

“I loved Eastern Kentucky, but I was just homesick,” she said. “I had never really been that far away from home for that long. Originally, I had every intention of going to the University of Tennessee. The coach at the time offered me a three-quarters scholarship, but there were eight throwers on the team at the time. She actually went to Texas my senior year at Elizabethton and offered me a full ride there, but there was no way I was going there. It was too far away.”

Barker spent 2 1/2 years at Eastern Kentucky before coming home to ETSU. She certainly made her presence known at the first meet in which she competed for the Buccaneers.

“My first meet back home was the Eastman Invitational at the Mini-Dome and that was really special,” she said. “It was special because I won the meet and beat all the Tennessee girls that I might’ve been teammates with.”

Even though Barker still had Presnell around, then-graduate assistant Randy Bungard was also a big influence on her throwing career at ETSU.

“Coach Bungard was so inspirational and he reminded me a lot of Coach Presnell,” she said.

Bungard is currently the associate head coach for men’s and women’s track and field at George Mason.

In her final two seasons at ETSU, Barker was a three-time Southern Conference shot put champion and still holds the league record for either indoor or outdoor with a massive throw of 54-6 at the indoor conference meet in 1988.

“The javelin is really unique and I actually picked it up when I was doing AAU meets,” she said. “The hip rotation is similar to shot put and discus, but the upper body is completely different. There is so much technique involved and the objective is trying to get the front and the tail to go through the same imaginary hole. That’s when you know it’s going to be a good throw. … I really liked doing all three throwing events, but discus was my favorite out of the three. Although shot put was my best event, statistically.”

The 1988 NCAA Indoor National Championship meet in Oklahoma City was a whirlwind for Barker on that mid-March day.

Barker was scheduled to be in the second flight and had gone outside to warm up.

“When I won the national championship, I still think it was a fluke,” she joked. “Coach (Dave) Walker was an official that day and they had started doing warm up throws for my flight while I was outside. I had completely missed all of my throws in warmups, but thank goodness Walker was officiating. He got me some warm up throws and I was throwing terrible starting out.

“I had been throwing pretty well before then. I was slipping in the ring and I just could not get a good throw in,” she said. “It was pretty scary and I didn’t know if I was going to be able to win it that day. I think I made it too hard on myself.”

Barker would end up winning with a best throw of 53-4½, which edged out Michigan’s Sonya Payne by over a foot.

With that national title in hand and a season-best mark of 54-6, she had qualified for the 1988 Olympic Trials in Indianapolis scheduled for later that summer.

“That day was one of those that I’ll never forget because it just all worked out for me,” she said. “If I could go back and do it differently, I would because I could’ve thrown better that day with the competition I had.”

‘SADDEST DAY OF MY LIFE’

Barker was considered by some of the track and field experts at the time to be one of the potential members to represent the United States in the shot put in the 1988 Seoul Olympics.

However, disaster struck for Barker.

“It wasn’t but a few weeks after I won the national championship that I was playing softball with some friends,” she said. “I got to second base and turned to go to third but got caught in a rundown. I turned to go back to second and my knee turned the wrong way and my leg went numb. I had blown my other knee out and ended up missing the Trials that year.

“That was probably the saddest day of my life.”

Barker said that during those hard days of rehab, the people that surrounded her was what kept her going.

“I think it was people like Judy Howard, Patty Simerly and Sonny Hunt that really made life good for me,” she said. “A lot of the people that I knew were teachers and I wanted to be like them and give back.”

Barker has spent the last 19 years as a physical education teacher at T.A. Dugger Junior High and originally started as a teacher’s assistant at the Science Hill Alternative School.

“I love the kids and going through times like these where we can’t see them makes it hard,” she said. “We have the best faculty and staff at Dugger and it really feels like a family. I love Carter County and being in Elizabethton. This is really home.”

“I love seeing the kids grow and gaining confidence in themselves,” she said. “That’s what Coach Presnell taught me when I first started was to be confident in myself. I feel like being a teacher and helping coach has helped me give back to both the throwing community and the community that I live in.”

Barker is also a member of both the Elizabethton High and Carter County Sports Halls of Fame. To her, those inductions mean just a little bit more.

“The inductions into the SoCon and ETSU Halls of Fame were really exciting for me,” she remarked. “But it meant more to be inducted into the Elizabethton and Carter County halls because I really am a homegrown girl and this community really does mean everything to me.”