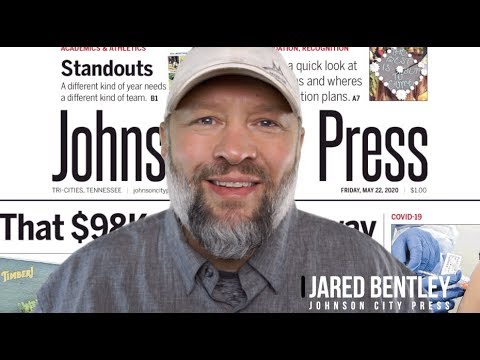 The Northeast Tennessee case count was reduced by one to 243. Three cases were removed in Washington County and two were added in Sullivan Counties. The region’s death toll remained steady at seven. Recoveries increased by four for a total of 228.

Rain’s in the forecast through the weekend, setting the stage for the slightest possibility of an all-time high water level for Watauga Lake on Sunday as rainfall for the area is up 65 percent from the average.

The previous high water mark on the lake was 1,967.06 feet, in 2013. The Tennessee Valley Authority River Forecast Center expected the lake level to reach 1,964.07 feet by the end of Thursday, but the lake’s measurement at 6 p.m. yesterday was 1,963.21. The projection for Saturday is for the water level to rise only another third of a foot, to 1,965.35, as average inflow drops by more than half.

Lt. Eddie Graybeal, Washington County Sheriff’s Department deputy and son of Sheriff Ed Graybeal, received 11 months and 29 days probation on a simple assault charge stemming from the slapping of a handcuffed man in the county’s jail in 2018. Prosecutors dropped an official misconduct charge, and also dropped an official suppression charge.

The incident had been caught on video, which was sent to a local television station in 2019. Terms of Graybeal’s probation include:

• 24 hours of training at the Tennessee Corrections Institute.

• Letters of apology to the victim and the county.

If Graybeal violates his probation, he faces serving 75 percent of the sentence in jail. At the present time, Graybeal would have the ability to continue serving in law enforcement.