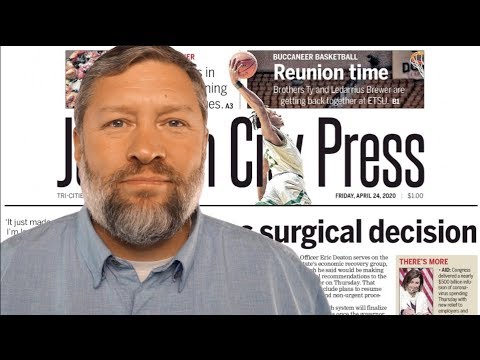 There’s always news, and always different stories, but they all take second chair behind the dominant issue of the day: the COVID-19 pandemic.

The Tennessee Department of Health on Thursday reported 424 new confirmed cases of the novel coronavirus (COVID-19), bringing the total to 8,266 since tracking began in March. The state also reported four new deaths, bringing the toll to 170.

While there is not a vaccine or a proven cure, there have been several options bandied about. None have shown much success.

The parent company of Lysol disinfectant warned Friday that its products should not be used internally to treat the virus after President Donald Trump wondered about the prospect during a White House briefing.

Tennessee Governor Bill Lee says we can all expect to grapple with “significant” revenue shortfalls in the state budget as Tennessee gears up for re-opening this week.

Lee outlined his justifications for reopening the state’s economy, saying “Virtually every indicator of success in containing COVID-19 show that your efforts have been working. This isn’t an indication that we should slack off at all, but it does give us a path to move toward doing some of the things we did before.”

He added that Tennesseans will need to continue social distancing practices even as the state’s economy reopens.

William R. Shaffer, the father of an infant who died last week in Bristol, was indicted Wednesday on charges of first-degree murder and two counts of aggravated child abuse in Sullivan County.

About 7:30 a.m. on April 14, Bristol police responded to 488 Meadowview Road in reference to an unresponsive 2-month old infant, who was later pronounced dead at a hospital. The responding officers thought the death was suspicious in nature and began an immediate investigation. Saffer was remanded to the Sullivan County jail under $1 million bond.

After a much-anticipated meeting on Wednesday concluded, the fate of Appalachian League baseball after the 2020 season remains in limbo.

Officials from Major League and Minor League Baseball met for an hour, releasing a joint statement that read, “The parties are continuing their discussions, with the goal of concluding a mutually beneficial long-term agreement in the near future.”

No date was set for the next meeting, but let’s hope that it is constructive and beneficial to the Appy League - we’d sure like to have our baseball back.