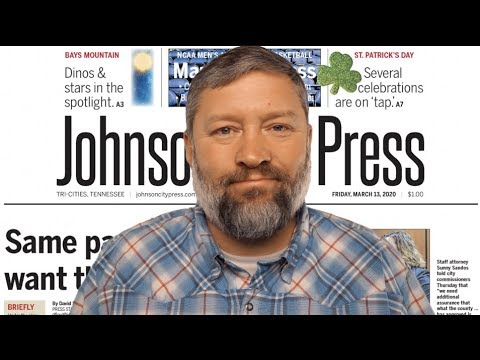 There’s really only one story gripping our region, and that of the rest of the country, and that is spread of the COVID-19 virus and the effects it is having on our nation and world. A global pandemic that has begun to work its way across the United States, the illness referred to as Coronavirus has spawned a million memes, a run on necessities, and an initial panic heretofore unseen.

The stock market has experienced a record hit, health care officials around the globe are bracing for the worst, and our citizens are split into camps of blame and praise for the Trump administration’s handling of the crisis. Cancellations also abound, with national festivals and concerts calling it a day, and sporting events around the world calling off seasons or postponing until an outcome is more easily seen and attainable.

In our little corner of the world, the effects are readily seen, as the Southern Conference has suspended all athletic competition until March 30 due to the spread of the novel coronavirus. That puts a stop to all baseball, tennis, golf, and softball action for the foreseeable future, and halts an historic run by East Tennessee State’s most successful basketball team in history.

But it isn’t just the Southern Conference cancellation that ended Men’s Basketball Coach Steve Forbes’ attempt to advance deep into the NCAA Tournament, it was the NCAA itself, taking the unprecedented step of cancelling all tournament games this year - both men’s and women’s. March Madness is gone, to be replaced by what many are calling “March Sadness.”

The decision was made quickly, and the news came from a tweet, as many announcements do these days.

Speaking to reporters this week, Forbes has gone as far as suggesting that senior athletes robbed of the chance to play in this year’s tournament should be given the opportunity to come back for another season. His five seniors led the team to the Southern Conference tournament championship Monday night, and he came to the conclusion that their careers shouldn’t end with a tweet from the NCAA.

Echoing a sentiment expressed by almost all coaches and administrators, Forbes said, “I’m heartbroken for everyone associated with our program, especially our five seniors. I want to personally thank my team and our fans for the magical season that has now come to an end.”

International travel is being restricted, vacation hotspots are closing amid the crisis, and local events and locales are scrapping plans at a fairly brisk pace. Some of the events that have decided to cancel are the Johnson City Schools band concert, any Washington County Schools events, the Symphony of the Mountains Beethoven concert, and the Will Hoge show at the Willow Tree Coffeehouse. The Asheville Symphony has cancelled all upcoming events as well.

East Tennessee State University is suspending in-person classes following spring break in response to concerns about the novel coronavirus for three weeks through April 9. The University of Virginia’s College at Wise has also put a stop to on-campus classes. And the remainder of the TSSAA girls state basketball tournament and next week’s boys state tournament have been suspended.