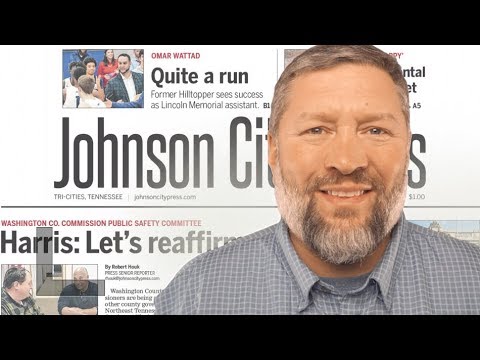 At last night’s commission meeting, Washington County Commissioner Kent Harris, who is a retired Unicoi County sheriff, asked his fellow commissioners to join other county governments in Northeast Tennessee and Southwest Virginia in passing a Second Amendment resolution to affirm and protect the constitutional right to own a gun.

“As a former sheriff I know how important it is for homeowners to have a right to defend themselves,” Harris said.

He told his colleagues Thursday he “likes the resolution,” and it “incorporates some of the things I have seen approved in other counties.”

The Second Amendment Sanctuary movement began in Virginia late last year after Democrats — many promising stricter gun control laws — took over both chambers of the Virginia General Assembly in the Nov. 5 election. Sullivan and Unicoi counties have both hopped on the trend, and the Associated Press has reported similar measures have taken hold in California, Colorado, Florida, Illinois and New Mexico.

“I know we are not in Virginia,” said Harris, “but we are close enough and it could happen here.”

Moog Protokraft, a Tri-Cities-based, military aircraft component manufacturer, recently outgrew the space it was leasing in Kingsport and in December moved to a new high-tech lab and manufacturing facility at 192 Bob Fitz Road in Gray. If you have an engineering background, and the desire to remain in the area, the company is looking at hiring 15 to 20 engineers this year and plans to hire an undetermined amount of manufacturing staff.

The company has enough space at its new facility to grow comfortably to 250 employees. Moog Protokraft is currently growing about 50% per year, producing equipment that transports data on aircraft. For example, if there’s a camera on the outside of a plane, Moog Protokraft would be involved in producing the infrastructure that transports the visual information to a monitor. The company essentially creates three products: Transceivers, ethernet electronics and computers, and also works with commercial customers.

Right now, the company operates an engineering internship program with several local universities, which acts as a way for the company to find and hire qualified candidates, retaining local talent and offering opportunities and challenges they won’t find elsewhere.

The 74-year-old retired physician said he came to his decision to retire after consulting with his family during the holidays.

“This doesn’t have anything to do with what’s happening in D.C.,“ the congressman said. “It’s a personal decision. I haven’t had two days off back-to-back since I was 60. It’s time to let off the gas.”

The congressman said he believes his legislative legacy in Congress will be the more than 25 laws he helped to pass dealing with veterans and military service-related health issues. Much of that legislation began during his chairmanship of the House Committee on Veterans’ Affairs.

That includes the MISSION Act, the Blue Water Navy Act and the Forever GI Bill.

U.S. Sen. Lamar Alexander, R-Tenn., issued a statement calling Roe “a champion for veterans, for students and for common sense in government.”

On Thursday, TriPride organizers announced plans to hold their next LGBTQ pride festival and parade August 29th in downtown Bristol, which they say will mark the first time a pride event was held in two states at once.

After making history as the first LGBTQ event of its kind in the region in 2018 in Johnson City and then in Kingsport in 2019, organizers of the annual TriPride Parade and Festival researched similar events in other split cities like Kansas City and St. Louis and found that none of those cities held their pride events in two states at once.

More than 10,000 people attended the festivities in Kingsport and Johnson City. More than 1,100 people marched in the parades representing 70-plus organizations, and 110 festival exhibitors were present. The group is hoping Bristol could be even bigger as the festival continues to grow.