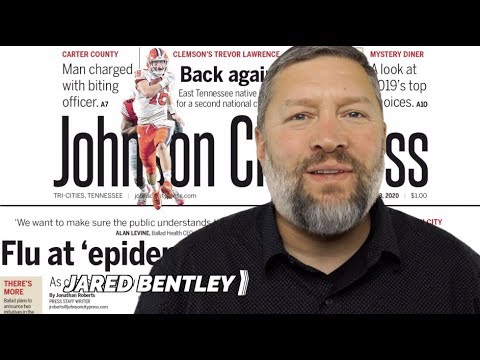 For the second time this year, Elizabethton Police shot and killed a man after he assaulted them, according to news releases issued by the Elizabethton Police Department and the Tennessee Bureau of Investigation. The shooting took place early Saturday morning when two officers were sent to a house in the 600 block of Hattie Avenue regarding an unauthorized visitor being in the home who was in violation of an order of protection.

When 31-year-old A.B. Carr ignored orders to leave, the officers entered the home and approached Carr, and an altercation began. Then Carr allegedly assaulted the officers with a metal object. The officers first attempted non-lethal force, but when he continued to attack the officers, he was shot.

On Sept. 16, two officers shot and killed Jeffrey Michael Gibble on Academy Street, not far from where this shooting happened, after he fired shots at them.

If you are a fan of “Tennessee’s oldest independent restaurant,” you might be waiting until summer for your next visit.

The 82-year-old Peerless Restaurant will be closed for the next six months while the building undergoes extensive exterior and interior renovations. The redevelopment will also result in a new bakery, a tavern and new retail businesses at the location on N Roan St.

Gary Kalogeros, whose grandfather opened the restaurant in 1938, said the project will allow his company to “redefine the Peerless experience, and transform it into a modern steakhouse.” The renovations and additions will also bring the opening of Tavern Room 38, which will feature small plate and “foodie sharables.” The tavern will offer regional craft beers and distilled spirits.

The River of Tri-Cities Church has already leased the site’s former banquet space while it works to renovate the old House of Ribs building as its permanent home, and the Department of Veterans Affairs intends to lease 5,000 square feet of office space in the Peerless Centre beginning immediately.

The flu season has reached “epidemic levels” in the Tri-Cities region, according to Ballad Health CEO Alan Levine. Ballad’s emergency rooms have seen about 1,450 cases of flu, with at least 1,000 of those occurring in the past three weeks.

While all Ballad health employees are required to get a flu vaccine, that hasn’t stopped many from contracting the virus themselves. While all other urgent care facilities were open on Wednesday, Ballad’s Gray clinic was shut down because all of the staff had gotten the flu. The clinic was able to re-open on Thursday.

Ballad officials are concerned that a return to classes from winter break could cause another spike in flu-like illnesses — putting even more pressure on schools and healthcare facilities. Levine said that Ballad has seen a 45% increase in the number of pediatric ER visits in December — 700 more than they saw in December 2018 — which includes all transmissible illnesses, not just flu.

So, do what you can to stay healthy, folks. If you haven’t gotten a flu shot, please do - it is the most effective way to ward off the possibility of contracting the virus.