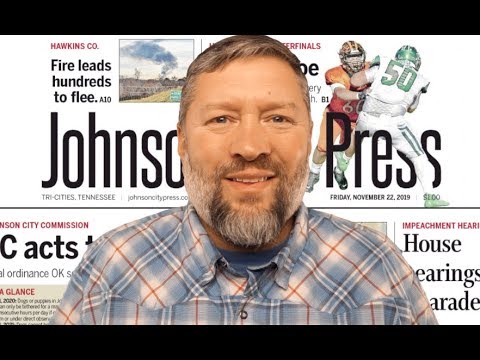 Wanted as a “person of interest” in a Kingsport death, Jeffry Chase Caldwell was located earlier yesterday afternoon and is in custody on a vehicle theft warrant and an assault warrant issued by the Sullivan County Sheriff's Office.

The arrest followed the suspicious death 79-year-old Lewis Vaughn on Gravely Road on Wednesday. Caldwell was listed as a person of interest, and the Sheriff’s Office issued a series of public requests for information about his whereabouts. On Thursday afternoon, the Kingsport Police Department received a call of a shoplifter at Kroger on E. Stone Drive, and the caller advised that the suspect was in a van in the parking lot. Police determined the van had been stolen and approached the vehicle.

Caldwell allegedly attempted to leave in the van, but officers were able to take him into custody. He was subsequently charged with resisting arrest, motor vehicle theft, and possession of stolen property.

Caldwell was in the news in 2013, when he was shot by Kingsport police after a two-and-a-half hour standoff that included “repeated detailed threats to harm both the officers and himself.”

This is a developing story. Updates will be provided as more information is made available.

Johnson City commissioners approved on third and final reading Thursday a new ordinance that phases out the placement of animals on chains in Johnson City, requires owners to register their dogs on an annual basis and makes it easier for the shelter to spay and neuter animals that end up in its care.

Among the new ordinances, starting Jan. 1, 2020, a dog or puppy can be placed on a trolley or pulley system in the owner’s yard for no more than 12 consecutive hours per day, according to the ordinance. The dog cannot be tethered for the 12-hour period to a fixed post unless attended or under observation.

Animals must have appropriate housing, access to food and water and be safe from attack by other animals. Owners will also have to get a registration certificate for dogs over 3 months old from the Washington County/Johnson City Animal Shelter on an annual basis.

For a full list of the new rules, and their desired effect on our local animal population, visit our website.

“Black Myself,” which Kiah wrote for the foursome Our Native Daughters, was among five nominees in the category. Kiah is a member of the group with Rhiannon Giddens, Leyla McCalla and Allison Russell.

In a statement to the Johnson City Press on Wednesday, Kiah said she is “mostly in shock” and that “being nominated for a Grammy is something that's always seemed like a dream.”

Hopefully she’ll get a well-deserved 33rd birthday present this year with her first Grammy win as well. The folks here at the JCP wish you all the very best, Amythyst.