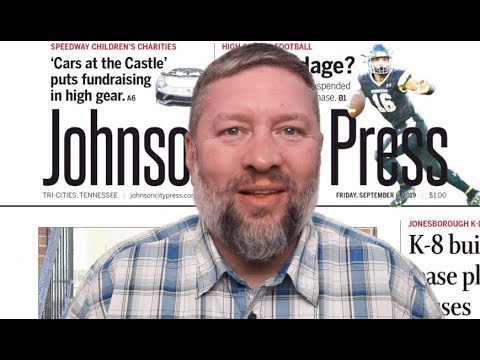 Tennessee Bureau of Investigation special agents were investigating the Tuesday shooting death of thirty-year-old Attilio Gilmartin by local law enforcement officers after a pursuit that ended in Bluff City.

Authorities said that at about 1 p.m. Tuesday, Sullivan County sheriff’s deputies initiated a traffic stop of Gilmartin on Highway 75 near Tri Cities Airport. Gilmartin, who was wanted on unspecified outstanding warrants, fled from officers. At some point during the pursuit, Gilmartin fired shots at deputies from the moving vehicle and continued to travel on Highway 394 toward Bluff City, where he was fatally shot by police.

As more information surfaces, we will have it readily available for you online at johnsoncitypress.com.

Increasing numbers of people in need, and a fire in March that destroyed the Haven of Mercy Thrift Store have left the shelter itself dangerously low on food for those in need.

Haven of Mercy Pastor and CEO Grant Rockley says, “We’re full, which is strange for this time of year. Everyone who is here eats with us three meals a day.”

For those who would like to help, Rockley said, “It’s meat and vegetables that we need. We feed well. It’s not soup and crackers.”

The thrift store provided about 60 percent of the Haven’s revenue, and the building has been demolished down to the concrete pad where the ministry is now looking to rebuild. In the meantime, the Haven is continuing its thrift store sales of good used clothing and household items from the store’s parking lot, hoping to raise funds to help those who need it most.

Congratulations to the Johnson City Cardinals, 2019 Champions of the Appalachian League! As Joe Avento put it so succinctly in his Wednesday column, “the team that wouldn’t quit did it again.”

The Cardinals overcame early defensive miscues and rallied to beat the Burlington Royals 8-6 Wednesday night at Burlington Athletic Stadium to win the Appy League finals two games to one.

It was the Cardinals’ sixth win in an elimination game in the last nine days and it gave Johnson City its 13th Appy League championship, its fifth since 2010.

There’s plenty going on in our region this weekend, but if you’re wondering why downtown Johnson City has been closed off, it’s the GEICO Motorcycle Built to Ride Tour.

The five-day, four-city tour — now in its seventh year — previously held its grand finale in Johnson City in 2017. This weekend will include bike shows, music, vendors and rides — in addition to its popular “Pro Builder Bike-Off,” which will feature top motorcycle builders from around the country.

Porch 40 will be hitting the stage tonight before moving onto Kingsport tomorrow for the 2019 TriPride Festival. TriPride experienced much success last year in Johnson City, and looks to duplicate or improve upon the numbers and enjoyment as they celebrate their first year in the Model City. If you get a chance to get out this weekend, we suggest taking in one or both of these wonderful events!