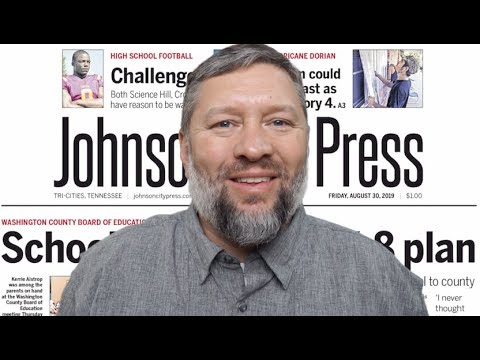 Jonesborough’s Matthew Hill will no longer serve as deputy speaker in the Tennessee House of Representatives, a position he was appointed to in January by disgraced former speaker Glen Casada. Newly elected Tennessee House Speaker Cameron Sexton, who was sworn in last Friday during a special session, has chosen Curtis Johnson of Clarksville to take Hill’s place.

Hill will have a new role as chairman of the new House Appropriations Subcommittee, created to examine the size and impact of the budget, and will oversee parts of the annual state budget process. The subcommittee will assess the process of formulating the budget and will analyze the spending of state departments, ensuring they are running efficiently. Hill said he has also been added to the Facilities, Licensure, & Regulations Subcommittee, and he will no longer serve as the chair of the TennCare Subcommittee. He said the rest of his committee appointments will remain the same.

The Johnson City Board of Education discussed concerns about the district’s capital needs at Monday’s board meeting, addressing equity between the county and city school districts.

After Jonesborough recently unveiled a proposal to fund a $28 million school and recreational complex in town, Johnson City school officials have had concerns about how that will affect plans to reconfigure Indian Trail Intermediate School and Liberty Bell Middle School into two new middle schools.

The original plan hoped to house grades 5 through 8 in those schools, but on Monday, the district approved a new plan to place fifth-graders back into elementary schools, meaning new facilities at Towne Acres Elementary School and renovations to Lake Ridge, Woodland and South Side Elementary schools would be needed. All of this would contribute to about $30 million in capital needs.

Last night the Washington County Board of Education voted unanimously to enter into an agreement with the town of Jonesborough to build the new K-8 school in question, to be built on a 48-acre tract just off North Cherokee Street and leased by the county.

The town would enter into a lease-to-own agreement with Washington County, which would make annual payments of $2.362 million as part of a 20-year deal.

Jonesborough Mayor Chuck Vest said the town should be able to build a new K-8 that “is superior” to the $28 million pre-K-8 school that opened earlier this month in Boones Creek.

“This is a win for all parties,” Vest told board members, noting it would eventually represent a $40 million “financial victory” for the county.