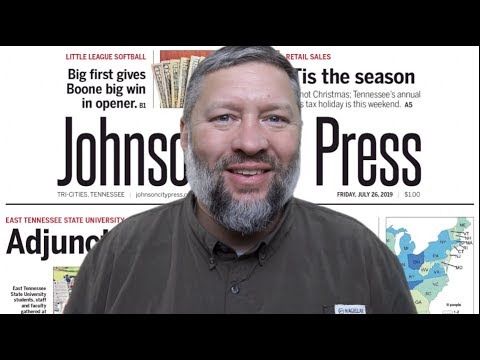 After several protests and meetings, East Tennessee State University’s College of Arts and Sciences is raising adjunct professor wages by $100 for anyone making less than $800 per credit hour.

Unlike tenured professors, adjunct professors at ETSU typically received a base pay rate of $600 per credit hour per semester and haven’t seen a pay raise in 21 years.

Students and faculty have campaigned for years to raise adjunct pay, often holding tongue-in-cheek “celebrations” commemorating each year without raises. While this isn’t a complete solution, or the answer to all the adjunct community is seeking, it is a good start.

Throughout East Tennessee, we’ve had plenty of rain, and with that rain comes water damage.

Carter County road crews assessing rain damage this week were feeling pretty good about things until they turned onto Heaton Branch Road in Poga Tuesday evening. A large brown scar through the green foliage alerted them to a fresh landslide that had taken the shoulder of the already narrow road down the mountainside.

Highway Department employee Shannon Burchette said the slide next to the road was 100 feet deep and 60 feet wide. The road could stay open, but it was reduced to one lane through the area of the slide.

It will take a major effort to fix the damage, and should take at least 30 days to complete the repair.

For the second time in three years, the Johnson City Press earned the coveted General Excellence Award in the annual State Press Awards on Thursday.

The Press received a total of 21 honors, including eight first-place awards, in the annual newspaper contest sponsored by the University of Tennessee and the Tennessee Press Association.

The Press also received the General Excellence Award for its division in 2017.

Congratulations to all the folks in the newsroom who work hard to bring you the news every day, keeping you informed with facts, evidence, and truth - because we at the Johnson City Press understand “what the people don’t know WILL hurt them.”

One last note - for those of you who were planning to attend the Alabama concert this Saturday at Thunder Valley, the show has been postponed. Lead singer Randy Owen will not be able to perform due to health issues, so the sellout show will be rescheduled for a later date.