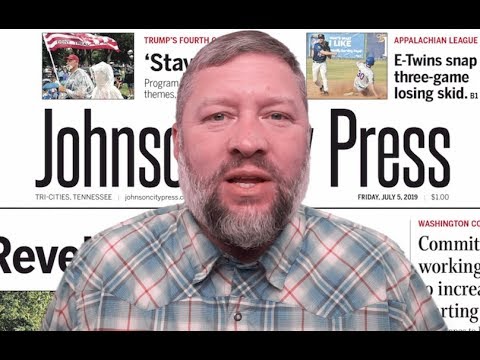 A Unicoi County man has been charged with two counts of attempted first-degree murder for allegedly ramming a couple’s vehicle with his pickup truck and firing shots in their vicinity Saturday near the Beauty Spot lookout on Unaka Mountain.

According to Unicoi County Sheriff Mike Hensley, Charles Andrew Moore encountered a couple near the popular lookout who had reportedly taken in his ex-girlfriend after their breakup.

He is accused of revving the engine of the truck and slinging gravel on the couple’s vehicle, firing shots in their vicinity, ramming the truck into the vehicle and chasing the couple in their vehicle along Rock Creek Road to a point near Rock Creek Park, where he lost control of the truck and wrecked. A 9 mm pistol and a 16-gauge shotgun were recovered from his vehicle. No one was injured in the incident.

Erwin Mayor Doris Hensley has been named the Tennessee Municipal League’s 2019 Mayor of the Year.

She was presented the award Tuesday at TML's annual conference in Memphis, and Wednesday she gave credit to the county's Joint Economic Development Board, Erwin Utilities, RISE Erwin, TVA, the USDA office of Rural Development and other grant funding partners and community volunteers and supporters who worked together to move the town forward.

The Mayor of Year award has been presented annually since 1954 to a Tennessee city mayor who “typifies the attributes of intelligence, effectiveness, hard work, dedication and sacrifice.”

Washington County understands the need to retain good employees, and is taking steps to ensure that it can compete for better talent, as commissioners are moving to establish a $10 an hour minimum wage for county government employees. The pay level would apply to all full- and part-time employees.

Commissioners also voted last month to approve a 2 percent raise for county employees. Figures show there are fewer than 25 part- or full-time employees now earning less than $10 a hour, but officials say it is near impossible to find someone who “will work (for less than a $10 per hour) and can pass a drug test.”

A reportedly high-ranking member of the Vice Lords gang has been apprehended after alleged threats to shoot police officers in Kingsport.

Dustin Keith Overbay was arrested Friday on Skyland Drive in Kingsport. He was wanted on felony warrants in both Sullivan and Hawkins counties, had previously eluded police, and was considered to be armed and dangerous. He was picked up at the residence of Matthew Carpenter, and Carpenter's elderly grandmother. Carpenter also had an active warrant for violation of probation.

Police found Overbay in the living room with a .38 caliber pistol, and Carpenter was located in the downstairs of the residence with a sawed-off shotgun and a stolen semi-automatic pistol. A third man, Brian Belcher, who had an active warrant in Virginia, was found in the garage. Police say approximately 3 grams of meth was also located in the residence.