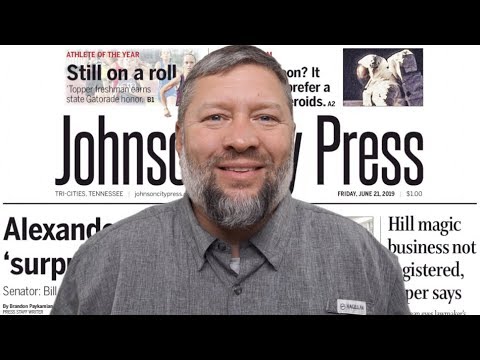 Students and representatives from East Tennessee State University’s United Campus Workers chapter gathered on the steps of Burgin Dossett Hall ahead of Monday’s Board of Trustees meeting to protest the school’s proposed tuition and fee increases - fees that still refuse to provide raises for adjunct professors.

During the meeting, the board approved a 2.3% tuition and fee increase, the bulk of which is going to a 2% salary increase for faculty and staff across the board, but adjunct professors are not part of that increase.

ETSU, a public university, receives roughly 24% of its funding from the state — prompting YDSA Chair Austin Cable to declare, “by no means will I ever call this a state-funded institution again.”

In response, ETSU President Brian Noland said, “I don’t think any budget is perfect,” but, “this budget is very different than what you see in many other states that surround us.” He also said the board has “vigorously” advocated for students, faculty and staff at the state level.

Cable said, during a discussion after the meeting, Noland said he’d support the bill if the money for the raises came from the state.

The Tennessee Regional Health Department confirmed Monday that one person in the area has been confirmed as contracting E. coli, and the incident remains under investigation to determine the source. An official said the single case was not related to food consumed at any area restaurant.

People can be exposed to E. coli from contaminated water or food — especially raw vegetables and undercooked ground beef. Healthy adults usually recover from an E. coli infection within a week, but young children and older adults have a greater risk of developing a life-threatening form of kidney failure called hemolytic uremic syndrome.

Stay informed as the story develops, through coverage on johnsoncitypress.com.

The Tennessee Medical Association says a new report shows a 13.3% decrease in opioid prescriptions in the state between 2017 and 2018, with a 32.3% drop in prescriptions for opioids since 2013.

The TMA says the data shows Tennessee did a little better than the national average in curbing opioid prescriptions during a recent 12-month period, and is on par with other states for a five-year downward trend. Even with the promising numbers regarding prescriptions, however, state health officials report that the number of opioid-related overdose deaths in Tennessee has remained unchanged.

Over 107 consecutive years of providing stage production to the Tri-Cities area, the Johnson City Community Theatre has seen its ups and downs. With rising production costs and funding that’s constantly fluctuating, it’s becoming more and more difficult for theaters such as the JCCT to keep their doors open.

With the JCCT being one of only a handful of local theaters that does not receive financial support from their city, the theater depends heavily on community support, and a bad show could possibly sink them. While no one at the theater is signaling for help just yet, our own Johnathan Roberts and Brandon Paykamian have penned a few articles about the theater, and its current production, which you can find on our website.

Take a few moments to find out what’s happening at Tennessee’s longest-running community theater, and spend an evening taking in a show and supporting those who work hard to keep it afloat.