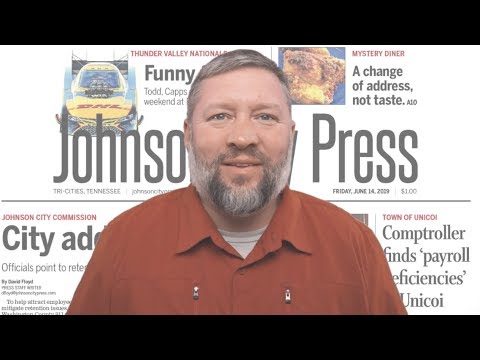 Johnson City Development Authority board members agreed this morning to authorize a $4.6 million bank loan to purchase and rehabilitate the John Sevier Center, moving forward on the cornerstone downtown redevelopment project without the county’s approval of TIF funds.

The commercial real estate loan from HomeTrust Bank will allow the JCDA to purchase the 10-story residential building and make needed repairs to meet the standards of the U.S. Department of Housing and Urban Development, which subsidizes the rents of the Sevier Center’s residents. With the source of funding secured, the development authority can now finalize a contract with HUD for receiving those Section 8 housing funds.

JCDA members said the downtown landmark’s redevelopment will be a transformative project for the city’s core. Their plan is to purchase the building, move its residents to new, yet-to-be-built apartments, and then sell the building to a commercial developer who will bring in retail and commercial business.

JCDA board members said there still could be room in the project for the use of TIF funding, but action to secure funding to purchase the building was needed to meet a deadline set by HUD.

If you hurry (as of the posting of this video), you might be able to make it to the Grand Opening of Tannery Knobs.

Johnson City quietly opened the gates of the mountain bike park at noon on June 6 but will hold a formal ribbon cutting ceremony at 3 p.m. today (June 14).

The park’s 3.7 miles of bike trails, located in the hills above Johnson City’s downtown, are color-coded to correspond with their difficulty level. The park’s green trail, called Breakfast Club, is for beginners, blue trails are more difficult, and black trails are designed for the most experienced bikers. A few of the trails are also open to hikers.

Developed by Grant Summers, president of Summers-Taylor Inc., Tannery Knobs also has a concrete pump track, a circuit composed of bumps and banked turns, giving tourists and residents another reason to visit the city’s downtown corridor.

A wanted man was fatally shot by police in Kingsport Monday afternoon after allegedly dragging a Sullivan County deputy with a vehicle.

The incident occurred shortly before 1:30 Monday in an area between Reservoir Road and South Wilcox Drive. Police received information that Terry Frost, who had six active warrants, including one for felony reckless endangerment, was at a residence on Pennsylvania Road. When deputies approached the home, Frost was seen running from the residence and into an overgrown area.

A short time later, police spotted Frost about a half mile away on Diana Avenue, reportedly getting into an SUV driven by a female. Police approached the vehicle and ordered the female to exit. When she complied, Frost allegedly jumped from the back of the SUV and into the driver's seat, dragging the deputy and receiving gunfire.

The injured deputy was taken to a local hospital for treatment.