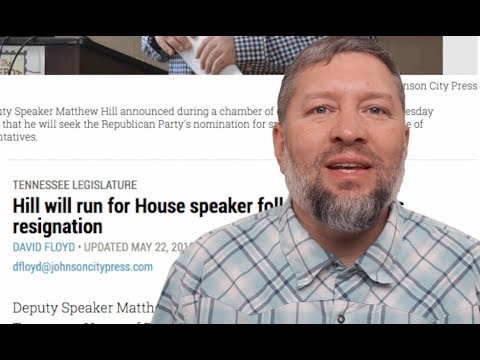 Tennessee’s Deputy Speaker Matthew Hill announced Wednesday that he will seek the Republican Party’s nomination for the speakership of the House, following news of Speaker Glen Casada’s resignation. Hill made the announcement during a meeting of the Johnson City-Jonesborough-Washington County Chamber of Commerce on Wednesday morning, saying he feels, “Right now we need some boring… when it comes to the speaker’s office.”

He said he’s been approached by other members asking him to consider running for the role and is in the process of gathering support from colleagues.

Casada announced plans to resign after members of the Republican caucus voted 45-24 in a secret ballot on Monday that they have no confidence in him as speaker, after news broke of sexually explicit text messages sent between Casada and his former chief of staff, Cade Cothren, as well as other allegations.

Aside from himself, Hill estimated there are four other representatives who have expressed interest in the speakership position. He believes the House should have a decision finalized by the end of June.

Johnson City’s Science Hill Topper Academy was placed on lockdown Tuesday, and a student was charged with weapons and other violations after police found an air pistol, among other things.

School administrators received a tip earlier that morning that a student possibly had a gun, and during the ensuing lockdown, the student was located and searched. Police reportedly found an air pistol, a knife, drug paraphernalia, electronic cigarettes and fireworks among the boy’s belongings.

He was transported to the Juvenile Detention Center and is awaiting arraignment.

Litter in Tennessee is much more than an eyesore.

It’s also a public health hazard, and something that threatens wild animals and their habitats. The Tennessee Valley Authority said it removed 230 tons of trash from the Tennessee River in 2018 alone.

That’s why the Tennessee Wildlife Federation is asking state residents to post their photographs on its website to demonstrate the toll trash is taking on this state’s rivers, woodlands and wildlife.

Tennesseans can submit their litter snapshots at tnwf.org/litter.