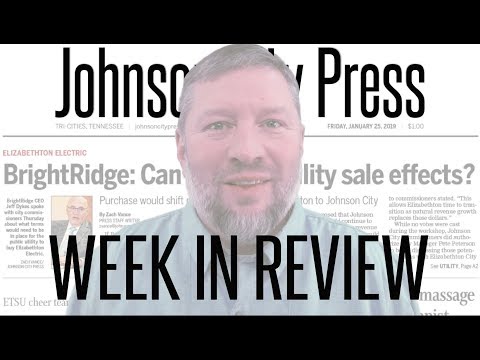 In national and world news, the shutdown has reached its 35th day, and a little respite has finally arrived. As I was editing today’s video, President Donald Trump says he'll sign legislation in order to reopen shuttered government departments for three weeks — until Feb. 15. The negotiations are continuing, and officials say a deal won't be locked in until Trump makes an announcement, and signatures are recorded.

Long time Donald Trump associate and confidant Roger Stone was arrested this morning and indicted on seven charges that include obstruction and witness tampering. He is accused of doing these things while working in coordination with senior Trump campaign officials, in connection with the Russian collusion allegations that Robert Mueller’s team is currently investigating.

Locally, murder and attempted murder charges have been filed against a man who shot and killed his ex-girlfriend’s new boyfriend after finding the couple together Wednesday in the Bloomingdale area north of Kingsport.

Sullivan County Sheriff’s Office Capt. Andy Seabolt said in a news release that Daniel Walsh went to the residence of Michelle Lacy to retrieve some property and caught the victim, Joshua Moyers, and his former girlfriend together.

The victim ran to the back bedroom and struck the defendant in the head with a hammer, before Walsh then retrieved a pistol and fired seven rounds through the closed door, stating that he shot the weapon until it wouldn’t fire anymore rounds. Moyers died from multiple gunshot wounds at the scene.

The man left dead in the yard of a Cash Hollow residence earlier this week was identified as Charles “Rooster” Shelton, a Lewisburg resident and tattoo artist who had been shot and killed.

Shelton was found Wednesday evening, and identified through an autopsy. Investigators located a vehicle they believe was connected to his shooting, a four-door, beige 2004 GMC Yukon with two broken windows. The SUV was found near the VA in Johnson City.

Someone at the residence apparently shot at the vehicle with a rifle from a window as it was leaving, killing Shelton in the process.

On a positive note, the United Way of Washington County wrapped up its 2018 fund raising campaign this week with a final tally of over one-and-a-half-million dollars in total contributions.

While many people in our region don’t realize the full impact the United Way has on our community, just know that the ones who do, and the ones who receive help and funds from the organization, are able to do what they do in the our region because of the help the United Way offers. Whether funding nonprofits, providing clothing and school materials, impacting education, or working to help those in need, the United Way of Washington County does wonders for our region.

Thank you to all who support the cause - please keep it up next year, or take a moment to find out how you can be involved.