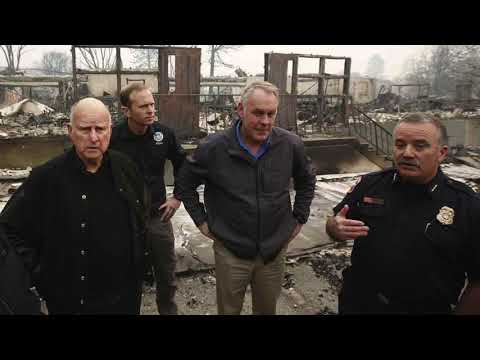 The nation’s deadliest wildfires in a century continue to burn in California and the search for more bodies carries on. At least 56 people have been killed, and more than 300 are unaccounted for, a week after flames swept through both ends of the state.

The nearly 220-square-mile blaze in Northern California was 40 percent contained, the state fire agency said, and firefighters succeeded in slowing the flames’ advance toward populated areas, while Southern California has seen more than 153 square miles burned. Over 500 structures were destroyed in Malibu and nearby communities, and at least three deaths were reported.

Officials in Northern California put the number of homes lost there at nearly 8,800, and the sheriff said the task of recovering remains had become so vast that his office brought in 287 more searchers Wednesday, and added 22 cadaver dogs.

Interior Secretary Ryan Zinke joined California Gov. Jerry Brown on a visit to the scene on Wednesday, saying it was the worst fire devastation he had ever seen.

“Now is not the time to point fingers,” Zinke said. “There are lots of reasons these catastrophic fires are happening,” including higher temperatures, dead trees, and poor forest management.

The realignment is expected to expand access to services while increasing the effectiveness of care through specialization and better coordination, according to a Ballad, but will have no real impact on the the system as it is.

Pratt started his writing career in 2008 after working as an attorney and journalist who covered the court system for the Johnson City Press in the 1980s and later worked for the Kingsport Times News. Pratt’s books have sold more than 3 million copies, with some of the stories based on crimes he covered here in East Tennessee.

His last social media post was a photo of the sunset off the coast of Bonaire.