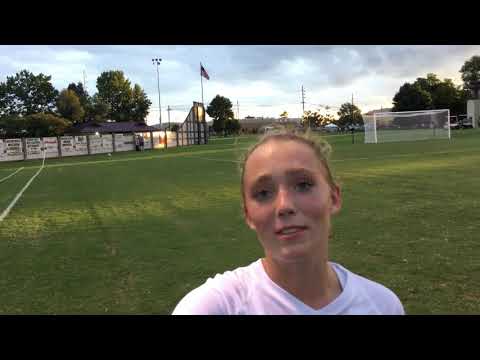 KINGSPORT — It was a typical pitch battle between arguably the top two girls soccer programs in the area.

And although they will meet again, Science Hill walked away with the first belt notch. The Lady Hilltoppers overcame a big momentum swing prior to halftime and earned a 3-1 win over Dobyns-Bennett on Tuesday night at Indian-Highland Park.

Sydney Jordan scored two of the goals for Science Hill, which improved to 5-1-1 overall and 2-0 in District 1-AAA regular season play. The Lady Indians felt to 1-1 overall after their first league contest of the season.

“It’s good to get out to an early win and put yourself in front,” said Science Hill head coach David Strickland. “It’s always tough to come from behind. I thought we had a patchy first half. We were sloppy. I thought in the second half we got better. We’re still learning each other.”

Science Hill jumped ahead midway through the first half when Jordan found the back of the net.

“I think it was Savannah (Fields) who slipped me a ball through, and I hit it with my left foot and it hit the far right post and bounced in,” said Jordan.

It looked like that goal would hold up to the break, but Dobyns-Bennett struck in the final minute. Callie Stidham collected a loose ball in the box and tap-rolled it into the corner of the net for a halftime tie.

“To come back and tie against a team like Science Hill, that was a big boost for us,” said D-B head coach Tony Weaver. “I cannot complain about the effort from our girls. They did a fantastic job. The effort was there.”

For Science Hill, the Indians’ goal was a tough moment.

“I wouldn’t say angry, but we were definitely disappointed,” said Jordan. “We felt like from that point we needed to push harder and get a few more in, so we could end up winning the game.”

Science Hill took the lead in the 48th minute. Lina Powell worked her way to the right place in the box and tapped the ball into the corner of the net for a 2-1 edge.

Jordan ended any doubt with a goal in the 78th minute.

“Lina played me a beautiful ball through, over the top,” said Jordan. “I just looked up and I had some space, so I decided to drive straight toward the middle of the goal. And I just tried to place it in the left side.”