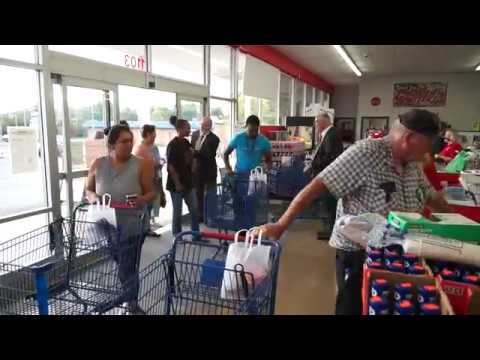 “It hurt a lot of people in this area,” he said.

Chesney, who lives on Holston Avenue within walking distance of the store, doesn’t have a car, and in the months following the store’s closure, would have to set aside about 2 1/2 to three hours so he could ride a bus to Walmart, do his grocery shopping and then catch a ride home.

Because he couldn’t carry everything he needed back on the bus, he would sometimes need to spread his grocery shopping over two or three days.

Now, a new store, United Grocery Outlet, has moved into the open space on North Roan Street, making Chesney’s life easier and creating an oasis in a food desert in Johnson City. The store had its grand opening on Wednesday and is now one of 39 stores that the chain’s parent company, Bargain Barn Inc., operates in the Southeast.

Bargain Barn CEO Gary Buchanan said the company is a grocery liquidator, which allows it to buy products from manufacturers at low prices and pass the savings on to customers.

“You can come in here with $100 and get enough to feed your family for two weeks if you know how to shop,” said customer Amy Chapman, 44, on Wednesday. “You can take a little bit and make it go a long way.”

Although she lives in Boones Creek, Chapman said the people living in the neighborhoods around North Roan Street need a grocery store like United Grocery Outlet in the immediate vicinity.

Daniel Hill, 22, used to work at the Save-A-Lot on North Roan Street. He said many of the people who visited the store when he worked there didn’t own cars.

“It was the only grocery store in the area,” he said, and when the store didn’t have something that a customer needed, some of them would have to take public transit to another grocery store across the city.

Chapman said she’s experienced first-hand the difficulty of trying to carry an armload of groceries back home on the transit system.

This stretch of North Roan Street has been home to several grocery stores over a seven decade period. The Henson family operated a store in the 1100 block in the 1950s, and when the Central Shopping Center was built around 1960, an A&P moved in followed by Wright’s and White’s in the same spot. The local White’s chain sold all its stores, including the Central Shopping Center location, to IGA in 2009.

“The prices are good, and every week they have variants of products, so you never know what you’re going to run across,” Richard said.

William Forney lives in the Carver community. He said that, until now, the closest food option for people living in his neighborhood were Price Less Foods and the Food City on South Roan Street or Walmart.

“It’s real nice to have one in walking distance again,” Forney said.