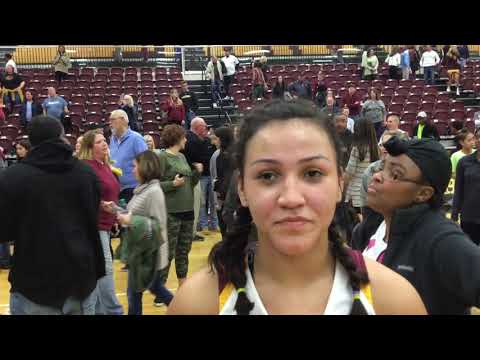 
Smith carries SH past Bearden and on to Murfreesboro

If Alasia Smith’s legs and back weren’t extremely sore after Saturday’s game, they will be soon.

After all, it’s not easy to carry a team all the way to Murfreesboro.

Trailing by nine points on three different occasions in the final six minutes of the game, Science Hill rode the stunning performance of Smith to a heart-pounding 49-47 win over Knox Bearden in a TSSAA Class AAA sectional girls basketball game at The New Gym.

Smith’s teammate, Jasmin Myers, said, “I was so proud of her. She will always carry this team. It’s just an honor to play with her.”

It was the 17th straight win for Science Hill, which improved to 28-7 and reached The ’Boro for the second straight year.

“It’s great for our kids, and it’s a testament to them,” said Science Hill head coach Scottie Whaley. “Not one time did they believe we were defeated. Our kids didn’t quit all year. Our schedule paid off. We didn’t panic, and Alasia took over at the end.”

The Lady Hilltoppers will learn of their quarterfinal opponent during a draw Sunday at 3 p.m. in Murfreesboro.

It was the second straight loss for Bearden, which finished at 29-4.

Smith totaled 18 points, 10 rebounds, three steals and three blocked shots in a true senior-won’t-give-up performance. She said the end of her high school career flashed in front of her eyes.

Smith said coming up with the loose balls, rebounds and steals was partly a product of listening to mom (Leah Jackson Smith) — who knew a little something about playing winning basketball for The Hill back in the day.

Trailing by one point with 25.9 seconds left, Science Hill turned up its fullcourt press to maximum extreme.

Nae Marion and Aliyanna Hill trapped East Tennessee State University signee Jakhyia Davis on the baseline. And when Davis tried to pass, Myers stepped in front for the steal. She lost control in the lane and went to her knees, recovering just in time to somehow roll a pass to Smith — who picked up the unusual assist and banked in the go-ahead bucket while getting fouled.

Smith missed the free throw, but somehow got her own rebound when the shot bounced toward the left baseline. Smith was fouled again, but missed both free throws with 13.2 seconds to go.

Bearden had a final chance and Zneyah McLaughlin drove into the lane on a fast break, where she was fouled on a layup attempt with 3.8 seconds remaining. She missed both free throws and Bearden got the long rebound, but stepped out of bounds.

Science Hill’s Erin Egerbrecht made one of two free throws with 2.3 seconds left, and Smith added one more steal at the buzzer to seal the win.

Bearden won the pace game, establishing a tough matchup zone early and keeping the Lady Hilltoppers from forcing the tempo.

The Lady Bulldogs did enough offensively, with McLaughlin leading the way, to lead 20-15 at halftime and 37-29 after three quarters. McLaughlin was terrific for Bearden, finishing with 17 points and six rebounds.

Certainly this was a team win, like any other game. But Smith simply made it happen.

After Kat Patton got a tough rebound and stick-back to make it 45-38, Bearden was eating clock. Davis drove to the left wing and tried to pass back into the paint to teammate Avery Treadwell. Smith sniffed the opportunity, made the steal, and raced down the court for a layup. Bearden 45, Science Hill 40.

Smith got another steal on the ensuing possession, raced to the block and was fouled on the shot attempt. She made one of two.

When McLaughlin missed the front end of a one-and-one chance, Smith rebounded, drove the length of the court and scored. Bearden 45, Science Hill 43.

After a timeout, the Lady Hilltoppers pressed. Bearden broke it and Emily Gonzalez wound up in an odd quadruple-team situation on the left wing. She somehow broke out of it and zipped the ball to Treadwell, who made the uncontested two-footer with about 35 seconds remaining. Bearden 47, Science Hill 43.

The Lady Hilltoppers rushed down the court, but worked the ball for an open shot. That was found in the corner and Myers knocked the bottom out of the net to pull Science Hill within one point with 25.9 seconds remaining.

“I just knew that one had to go in,” said Myers, who made only her second bucket of the game. “That was the shot, and I had to do it for my team. I was nervous, but I went and played. It was true from the second it left my hand. That one had to go in.”

Said Whaley, “Jasmin is a product of hard work and determination. She’s a great kid who works hard.”

Jeila Greenlee totaled six points, four assists and three rebounds. She was whistled for a technical foul midway through the fourth quarter and did not return to the game.