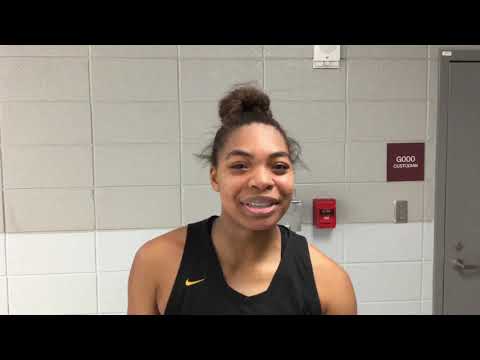 KINGSPORT — If the episode in the series between Science Hill and Dobyns-Bennett had titles, this one would be, “Unstoppable.”

And Alasia Smith would be the central character.

With Smith exploding for 32 points and 12 rebounds, the Lady Hilltoppers wrapped up the Big Seven Conference basketball title with a 57-38 win Friday night at the Buck Van Huss Dome.

The Science Hill senior upped her game to a postseason level.

“That’s a good sign,” said Science Hill head coach Scottie Whaley. “Our kids know what time of year it is. One of their goals was to win the conference championship, and they’ve got other goals, too. They know where we want to be at the end of the season.”

Playing at D-B for a league title had something to do with Smith’s performance.

“It’s kind of a big thing for all us,” Smith said. “We always want to be first in the conference. D-B has such a good environment, we just all had to be ready to play.”

Smith scored 19 points in the first half and added 11 in the fourth quarter.

After a tight first half with Science Hill holding a 31-27 advantage, the Lady Hilltoppers dominated on the defensive end in the third quarter. They outscored D-B 11-3 to take a double-digit lead into the final quarter.

“We spend a lot of time on defense,” said Whaley. “D-B handled our pressure in the first half, so we decided at halftime to go back to halfcourt man. And I thought our kids did a fantastic job with it.”

The Lady Indians’ head coach said it has been the same stumbling point for his team against Science Hill.

“I like our movement and things, we’re just not finishing,” Francis said. “I like the direction we’re headed, but right now we just have a hard time scoring.”

And some of that is Science Hill, he said.