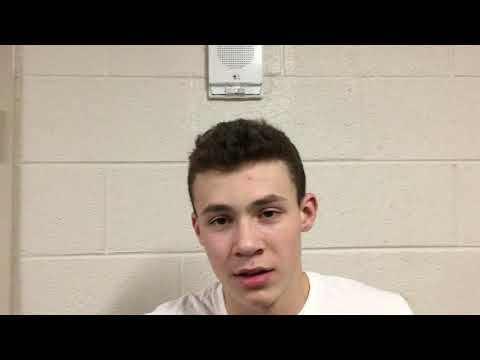 For the second time this season, Science Hill exploded out of the gates against Daniel Boone.

This time, the Hilltoppers maintained it.

After running away to a 19-point halftime advantage, Science Hill kept rolling for a 77-48 win in a Big Seven Conference basketball game at The New Gym on Friday night.

The Hilltoppers won by only five points in the game at Boone, and Science Hill guard Keynan Cutlip said defense was the difference this time.

“We went back in and watched a bunch of film,” said Cutlip. “A lot of it was on the defensive end, and just picking up the defense and keeping it going throughout the game.”

Science Hill’s guards played well as a group and the paint presence was right in step with the perimeter play.

“Their guards are as good as any in the league, and I thought our guards did a good job of looking for opportunities to score within the system,” said Science Hill head coach Ken Cutlip. “We had a team game with our bigs finishing around the basket. It was an inside-outside attack the entire night.”

Jake Matherne was particularly beastly in the paint with 13 points (on 6 of 7 shooting from the field), 10 rebounds and six blocked shots. Hunter Phillips was also a force, totaling 11 points and eight rebounds.

“We did a much better job of being patient and finding those guys in the right positions,” said Ken Cutlip. “Unlike over in Gray, our bigs finished around the basket throughout the entire game. And we had a sustained effort throughout the game.”

Science Hill jumped on Boone with a pace the Trailblazers were unable to match. By the end of the first quarter, the Hilltoppers held a 23-12 advantage.

In the second quarter, Science Hill seemed to ratchet up the tempo even more and carried a 44-23 lead into the locker room.

“We knew how dangerous a team they are, and how well they are capable of shooting the basketball,” said Ken Cutlip. “I thought we had great defensive energy. And because we really limited their shots, we were able to get out and get some transition baskets.”

The third quarter was a speed bump, but Science Hill expanded its lead to 58-35.